Part 2: Would a Citizenship Question on the 2020 Census Reduce Response Rates?

The Commence Department announced yesterday that the 2020 Census will include a citizenship question. In a blog post published earlier that day, we discussed the concern that adding this question might reduce the response rates in immigrant communities, potentially leading to an increased undercount, especially given the Trump administration's emphasis on immigration enforcement. Several news stories repeated this concern yesterday.

In our prior blog post we reported that there has been no increase in the share of people who refuse to take part in the Census Bureau's annual American Community Survey (ACS) (which asks about citizenship) that can be attributed to Trump's rise. Further, the share of people who do not answer the ACS citizenship question or who give an answer that does not make sense also shows no increase that can be linked to Trump. We also reported some additional information from the Census Bureau's monthly Current Population Survey (CPS).

In this posting, we further analyze the CPS and we find that the share of new people entering the survey each month who do not answer the survey's citizenship question, or who give a nonsensical answer to it, seems to have been unaffected by the Trump's candidacy or election.

The figure below reports the share of responses to the CPS citizenship question that had to be "allocated" by the Census Bureau. An allocated response means that the respondent left the question blank or gave an answer that did not make sense — for example, someone indicates on the place of birth question that he was born in the United States, but then indicates he is not a U.S. citizen on the citizenship question. Using a complex methodology, the bureau fills in or fixes these problematic responses. Unlike the annual ACS, which our prior blog examined, the CPS gives us data for every month; this should give us a clearer indication of any possible "Trump effect" on the willingness of people to report their citizenship.

The figure only reports figures for the CPS "incoming rotations groups". Each month new people join the survey and remain in it for four months, leave it for four months, and then return for four months. There are a total of eight rotation groups in the survey at any one time, one of which leaves each month while one joins the survey each month. The figure below looks only at the incoming group — the people joining the survey for the first time. This means this is the first time they have been asked about their citizenship by the Census Bureau. The allocation rates reported in the public-use data for the incoming rotation group shows no big jumps or shifts upward in allocations associated with Trump's candidacy or election. (If we look at all the people in the survey there is also no discernible Trump effect.) Events such as the announcement of his candidacy or his winning of the election were certainly well covered by the media. Yet the figures show no clear indication that these events increased the need for the Census Bureau to fill in blanks or correct responses for the citizenship question among new people joining the survey.

In sum, allocation rates in the CPS when examined month by month show no "Trump effect" of the kind we would expect if the president's emphasis on enforcement impacted the bureau's ability to collect citizenship data. As I observed in my prior blog post, the Census Bureau's ongoing effort to collect surveys that include a citizenship question do not indicate that adding such a question to the 2020 decennial census would significantly reduce response rates.

There has been no significant change associated with the rise of Donald Trump in the allocation rates for the citizenship question in the monthly Current Population Survey. 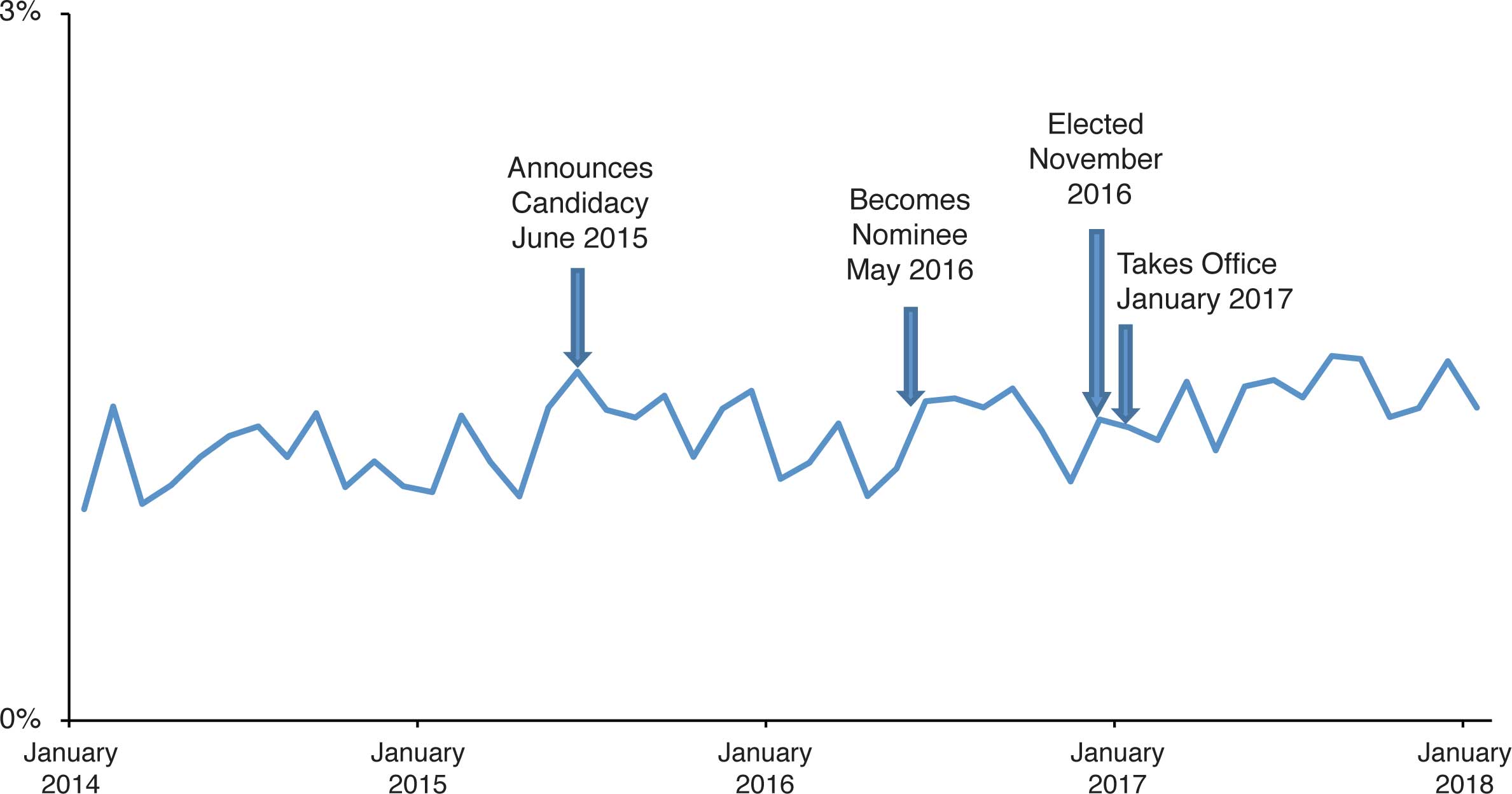