The Democratic party has taken a radical turn on immigration. Gone are the not-so-distant days of Barbara Jordan, when concern for the rule of law and social and economic cohesion were taken seriously. Today, the party is led by firebrands like Alexandria Ocasio-Cortez, who call for abolishing an entire enforcement agency. Democrats have staffed all four immigration-related panels in the House of Representatives with members who are hostile to national borders. The Democratic-controlled chamber has already passed two major amnesty bills. Not to be outdone, President Biden has signed several executive actions that stop construction of the border wall, eviscerate interior enforcement, and remove restrictions on travelers from regions rife with terrorism, among other things.

None of these policies had the support of Democratic leadership in the 1990s. At that time, President Clinton was enforcing the law, environmentalists were concerned about population growth, and labor unions were prioritizing American workers. Those positions, which had bipartisan support, are condemned as close-minded and bigoted by Democratic leadership today. What brought about this fundamental change, a change so extreme it threatens the very sovereignty of the United States? Like their libertarian counterparts on the right, one should never discount the powerful financial incentive that Democratic elites have for opposing borders. But powerful financial incentives existed long before the current push to effectively abolish immigration law. The mainstreaming of these radical positions is, at least in part, the result of a long Gramscian march through the institutions that began in the early 20th century. 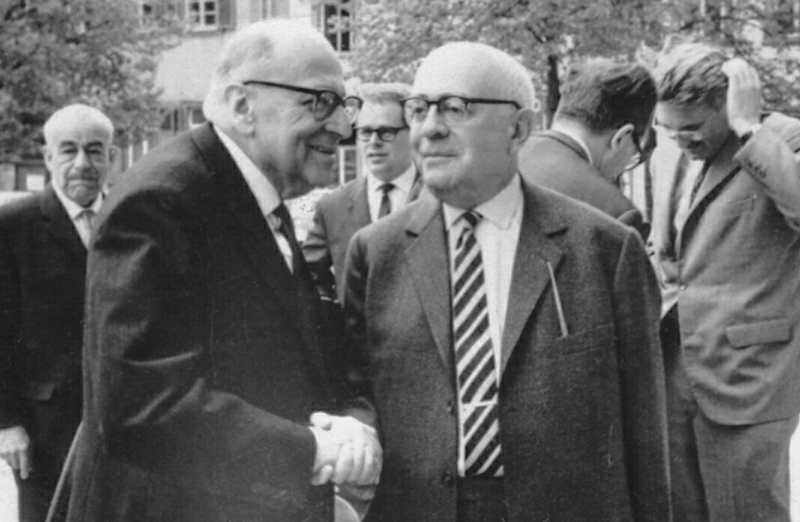 Max Horkheimer is front left, Theodor Adorno is front right, and Jurgen Habermas is in the background, running his hand through his hair. Photograph by Jeremy J. Shapiro, Heidelberg, April 1964.

In his book The Genesis of Political Correctness: The Basis of a False Morality, Michael William traces the development of critical theory by a group of German social scientists who grew disillusioned with the failure of traditional Marxism. Realizing no proletarian revolt was forthcoming, they converted the ideology’s attacks on class into broader cultural antagonisms. The group, known as the Frankfurt School, saw the fundamental structure of Western society as irredeemably oppressive and sought its eventual overthrow through internal conflict. This conflict would be fomented primarily through the manipulation of language that would recast all relationships as power struggles between the oppressors and the oppressed. By changing the way that familial and social relationships were defined, Max Horkheimer, Theodor Adorno, Herbert Marcuse, and their colleagues sought to change the way that people understood these relationships. Over time, they hoped that discontent and division would break down the existing order of society.

In his essay “Repressive Tolerance”, Marcuse, echoing Rousseau, argues that public opinion is invalid because a false consciousness has become the general consciousness, enslaving people who do not know they are enslaved. This tyranny of the majority, which masquerades as tolerance, can only be overcome by militant intolerance. Marcuse advocates banning the speech and assembly of certain groups and he calls for the “withdrawal of civil rights” from a majority who is oppressing the minority. He supports “rigid restrictions on teachings and practices in the educational institutions” and argues that support for calm and reasoned debate facilitates oppression. What is needed is the development of an enraged and subversive faction that is willing to engage in violence against the established order.

Marcuse believed that the catalyst for this uprising would be alienated minority groups. Such groups would take the place of the broader working class who, to Marcuse’s chagrin, seemed content in their supposed oppression. So he looked to the American black population as a possible source of agitation and supported militant activism. It is important to note that Marcuse did not want these activists to succeed in remedying injustice, but wanted minorities to remain marginalized from the larger society. As William explains, “For Marcuse, the integration into society of supposedly alienated groups acts as a stabilizing force and thereby neutralizes the revolutionary elements which, according to Marxism, should be committed to society’s overthrow.”

The key for Marcuse, a founder of critical theory, was to sow division. It was not to redress wrongs or grievances within the existing social framework, but to perpetuate and inflame those wrongs and grievances until the social framework could be overthrown. Integrating peoples into a functioning society was not helpful to his goal of revolution. But one major development, which Marcuse may not have even anticipated, was helpful: the modern era of mass immigration. As Marcuse was winding down, that era was winding up. The Hart-Celler Act of 1965 exponentially increased the number of immigrants admitted to the United States. In just a couple of decades, there were enough newcomers to begin to overwhelm the assimilation process. And by that time, there were enough critical theorists in academia to challenge the very notion of assimilation.

One such theorist is Jurgen Habermas, a prominent German sociologist whose voluminous body of work is heavily influenced by the Frankfurt School. As William points out, Habermas believes that “the classic form of the nation state is disintegrating” and envisions a “constitutional patriotism” that is stripped of language and culture and devoted to a political authority that extends civil rights beyond borders. He claims that “citizenship was never conceptually tied to national identity” and that “republican freedom can cut its umbilical links to the womb of the national consciousness which had originally given birth to it.” Habermas now sees the possibility of a global public sphere that was once imagined by Kant and Rousseau: “The arrival of world citizenship is no longer merely a phantom, though we are still far from achieving it. State citizenship and world citizenship form a continuum that already shows itself, at least in outline form.”

For the classic form of nations to disintegrate, national identity must first be dissolved. Habermas, like many of his fellow academics, sees mass immigration as a catalyst for this process. He praises the effect of multiculturalism on the United States and, in the European context, writes approvingly that “Immigration from Eastern Europe and poverty-stricken regions of the Third World will intensify multicultural diversity in these societies. This will give rise to social tensions.” He believes that these social tensions, which were sought by Marcuse, will hasten the move to a supranational governing structure that is devoid of shared history or tradition.

Like Marcuse, Habermas dismisses the suffering that will result from these social tensions. He denigrates concerns over the upheaval caused by mass immigration, referring to such concerns as the chauvinism of prosperity: “The European states should agree upon a liberal immigration policy. They should not draw their wagons around themselves and their chauvinism of prosperity, hoping to ignore the pressures of those hoping to immigrate or seek asylum. The democratic right of self-determination includes, of course, the right to preserve one’s own political culture, which includes the concrete context of citizen’s rights, though it does not include the self-assertion of a privileged cultural life form.”

Habermas asserts that “One’s own national tradition will, in each case, have to be appropriated in such a manner that it is related to and relavtiveized [sic] by the vantage points of other cultures.” He sees mass immigration and the relativizing of cultures as a way of democratizing citizenship. This process is being pushed with a particular goal in mind. As he explains, “Only democratic citizenship can prepare the way for a condition of world citizenship which does not close itself off within particularistic biases, and which accepts a worldwide form of political communication.”

This view is now pervasive among public figures. William cites several others, like Bhikhu Parekh, a British political theorist turned politician who served on race and multicultural commissions before being appointed to a life peerage in the House of Lords. Parekh uses his influential position to call for unlimited immigration to transform the United Kingdom into a “community of communities” and a “multicultural post-nation” that sheds its cultural identity. These sentiments are nearly universal in American universities and are routinely pushed by post-American politicians and activists. While campaigning for president, Joe Biden tersely summarized this view with his assertion that people who entered the United States illegally “are more American than most Americans are.” In other words, America is merely a vague unrooted universal sentiment.

Underlying this position is the skepticism and intolerance of critical theory, with its contempt for the rule of law and efforts to integrate newcomers into a majority culture that is seen as oppressive. As William notes, this contempt extends to patriotic citizens, who are now being taught to “embrace a hatred for their countries and their histories.” Like previous revolutions, this great upheaval is being undertaken with the foolish hope of creating a secular utopia. Whether they realize it or not, Democratic leaders are now perpetuating this upheaval with their efforts to effectively abolish immigration law.