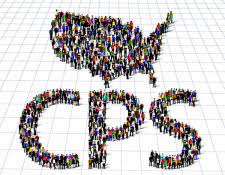 This analysis is a companion to an earlier analysis that looked at labor market trends among immigrants and the U.S.-born at the national level. That analysis showed that there has been a long-term decline in the labor force participation rate among the U.S.-born. This analysis shows that the decline in labor force participation is universal or nearly so across the entire country among the working-age U.S.-born. The current low unemployment rate, which only includes people who have looked for a job in the prior four weeks, masks the long-term decline in labor force participation, which measures the share of working-age people holding a job or looking for one. The large number of U.S.-born people on the sidelines of the labor market contributes to a host of social problems.

This analysis is based on the monthly Current Population Survey (CPS) collected by the Census Bureau for the Bureau of Labor Statistics. Like all measures of labor force attachment, labor force participation rises and falls with the economy to some extent. But when we look at the peak years of the economic expansion (2000, 2007, and 2019) as well as 2022 because it is the most recent first-quarter data available, we find a decline in labor force participation in all states or nearly all states depending on the sub-populations examined. We also provide some information for the peak years of 1979 and 1990 to provide historical perspective, though we cannot separate out the foreign- and U.S.-born in the older CPS data. Immigrants (legal and illegal together) in the CPS are often referred to as the "foreign-born" and include all persons who were not U.S. citizens at birth — primarily naturalized citizens, lawful permanent residents, long-term temporary visitors (e.g. guestworkers), and illegal immigrants.

This report primarily uses the public-use files of the Current Population Survey (CPS) from the first quarter (January, February, and March) for the peak years of 2000, 2007, and 2019. We also use 2022 data because it is the most recent quarterly data available. In Table 8, we use the Annual Social and Economic Supplement of the CPS collected in March each year to provide data going back to earlier peak years in 1979 and 1990. In those two peak years, the foreign-born are not broken out separately. Unlike the monthly employment situation reports from the government, this analysis reports statistics for the foreign-born and the U.S.-born separately. The raw data used in this analysis comes directly from the Census Bureau’s website, which collects the data for the Bureau of Labor Statistics (BLS). Based on a monthly survey of 60,000 households, the CPS is the nation's primary source for the unemployment rate and other labor force statistics. The sample is weighted to reflect the actual size and demographic makeup of the civilian non-institutionalized population, so it does not include those in prisons and nursing homes.

Key Concepts and Terms. The labor force includes all workers plus those who are not working but have actively looked for work in the four weeks prior to the survey. Our primary focus in this analysis is the labor force participation rate — the share of people in a particular age group working or looking for work. This is different from the unemployment rate, which is calculated by dividing the number of people actively looking for work in the last four weeks by the number in the labor force (working or looking). Because of the way it is calculated, those not in the labor force are not included in the official unemployment rate. Sometimes the BLS will report labor force participation for all persons, including those of retirement age. But such statistics do not measure the phenomenon of declining work among the working-age, which is our focus here.

Definition of Immigrant. The term “immigrant” has a specific meaning in U.S. immigration law, which is all those inspected and admitted as lawful permanent residents (green-card holders). In this analysis, we use the term “immigrant” in the non-technical sense of the word to mean all those who were not U.S. citizens at birth. Typically, the government refers to these individuals in surveys such as the CPS as the “foreign-born”, which includes all persons who were not U.S. citizens at birth. They include naturalized citizens, lawful permanent residents, temporary visitors, guestworkers, and illegal aliens.

Matching Published BLS Tables. In this report, all statistics covering the entire population, such as the unemployment rate, match those published by the BLS. However, the counts and percentages for sub-populations will in some cases be slightly different. The reason is that the Census Bureau adds "perturbations" to the public-use microdata to protect respondent confidentiality. Fortunately, the Census Bureau states that any differences between published figures and those calculated from the public-use data will be so small that they "fall well within the sampling variability associated with CPS estimates". In other words, there should be no meaningful difference between statistics calculated from the pubic-use data and those published by the BLS.

Seasonal Adjustment. The figures in this report are not seasonally adjusted. Unadjusted figures are conceptually simpler and easier for other researchers to replicate. Also, the limited number of statistics on the foreign-born published in the BLS monthly "Employment Situation" (Table A-7) reports are, like those reported here, not seasonally adjusted. Finally, comparing the first quarter of each year controls for seasonal differences and provides a larger sample and more statistically robust estimates. This is especially important when looking at smaller subpopulations.

Potential Problems with the Data. The Bureau of Labor Statistics (BLS) reports potential problems with the CPS since March 2020 because of the Covid-19 pandemic. First, interviewers who administered the survey miscoded some respondents as employed when they were on furlough, temporary layoff, or similar situations. They should have been considered temporarily laid-off and coded as unemployed. The number unemployed and the unemployment rate would be higher in March 2020 through December 2021 if these individuals were counted as unemployed. Second, the response rates for March 2020 through December 2021 were significantly lower than prior to Covid-19, though rates have improved since hitting a low in June 2020. These lower rates increase the sampling error of the survey. However, in June 2020, when the problem was most pronounced, BLS stated that, “Although the response rate was adversely affected by pandemic-related issues, BLS was still able to obtain estimates that met our standards for accuracy and reliability.”

Neither the Census Bureau, which collects the data, nor the BLS has altered the data in response to these issues. Our analysis takes the raw CPS data as provided and our results match published non-seasonally adjusted figures, with the caveats about perturbations in public-use data discussed above.

1 This excludes the District of Columbia, where the rate rose. In this and subsequent bullets we report the average decline across states, treating each state as a single case. At the bottom of each table, we also report the decline for the country as a whole. Since states vary in size, the average across states is not the same as the decline for the nation as a whole, but the two numbers are similar.

2 The Annual Social and Economic Supplement of the CPS collected in March (which is the data used in Table 9 for men) shows a rise in female labor force participation until 2000, with a decline thereafter. In 1979, 60 percent of prime-age women without a bachelor’s degree were in the labor force; by 1990 it was 71 percent, and in 2000 it was 75 percent. Tables 5 and 8 show that labor force participation among U.S.-born women declined after 2000. One might think that the decline in the labor force participation of women was due to more staying home to care for young children, but this is not the case. Nationally, among the U.S.-born in the first quarter of 2000, 80 percent of prime-age women without a bachelor’s degree who did not have any child(ren) under age 13 were in the labor force compared to 73 percent in 2022. Even before Covid in 2019 it was 74 percent. For prime-age, less-educated women with younger children it declined from 73 percent in 2000 to 69 percent in 2022. Thus, the decline is more pronounced for those who do not have young children. Also, it must be remembered that the share of women who even live with a child has declined as fertility has fallen. In 2000, 44 percent of all women 25 to 54 lived with a child under age 13, by 2022 it was 40 percent (Table 9). Therefore, it is extremely unlikely that changes in child-rearing practices account for the decline in labor force participation among U.S.-born women.