Migrants from terror-plagued countries and around the world are bottled up in Latin America, waiting for the green light 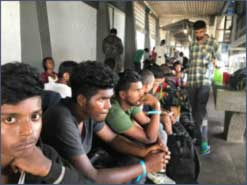 It bears remembering that next year's now-broadly predicted surge of illegal immigration to the U.S. Southwest Border — largely the result of the Biden campaign's months of messaging that the incoming president will clear all obstacles and penalties for it — will include not only Spanish-speakers.

Aspiring migrants who in past years have shown up from more than 150 countries also have heard the Biden-Harris clarion calls of welcome. They are building up behind a dam of Latin America coronavirus border closures and of President Trump's deterrence policies, waiting for the moment when they are all removed sometime during 2021.

As the Center for Immigration Studies has frequently reported, migrants from very distant countries are known in aptly descriptive government parlance as "extra-continentals" or, if they are from countries where violent jihadist ideology is ubiquitous, "special interest aliens". (See this January 2020 CIS video report about extra-continental and special interest alien migration.)

Besides often evidence-free tales of persecution, war, and economic woe, these uninvited strangers also will arrive as higher national security risks that will need careful scrutiny considering the ills that beset their home countries in the Middle East, Africa, and Asia. They will show up, often without even identification, never vetted for involvements in Islamic terrorism, espionage, war crimes, or other criminality they may have committed in home countries with failed governments unable to keep intelligence databases or criminal files that American authorities can check.

Even with the pandemic border closures in Central America and the Trump deterrence policies, a tractor beam has reached out and grabbed extra-continentals in increasing numbers. Even despite obstacles, apprehensions at the American southern border — of those from neither Mexico nor the Northern Triangle countries of Central America — more than doubled since July, from 2,526 to 5,752 through the end of November, CBP statistics show.

It seems the numbers can go nowhere but skyward once the path is cleared, since a great many more have been bottling up for months in countries like Panama, waiting for the right conditions — the seating of a President Joe Biden with his plan to undo Trump policies and the lifting of pandemic-related border closures as the virus wanes — which are both on the immediate or intermediate horizon. 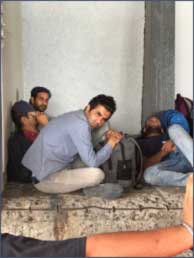 Thousands of extra-continentals are backed up in heavily transited Panama, which as CIS reported from the country in late 2018, has long served as an almost unavoidable through-way for U.S.-bound migrants who initially landed in South America. At least 22,000 migrants entered Panama from Colombia during 2019.

A recent United Nations report said a Panamanian coronavirus quarantine in effect since March has trapped or significantly slowed migrants from Haiti, Congo, Bangladesh, and Yemen in increasingly overcrowded government camps. It's unclear how many are stuck in Panama at any given moment, but the situation is so dire that a range of UN agencies have flocked to the isthmus nation to provide basic needs while migrants wait for the quarantine to lift or find other ways to keep going.

Before the region's quarantine, Panama and Costa Rica had an agreement known as "controlled flow" that provided government food, temporary shelter, medical care, and buses that would move the migrants from one country to the next; Nicaragua did not participate, so human smugglers took over from there. But now Costa Rica has closed its borders for the pandemic, as have Honduras, Guatemala, and Mexico. All forward movement is now back in the hands of human smugglers for those who can muster the money to pay.

Costa Rica media reported that thousands of Cubans, Haitians, Nepalese, Congolese, Cameroonians, and Indians are now stuck in Panamanian camps, unable to proceed to the Costa Rica border. Frustration has led to unrest in the government camp for 200 people in the small Panamanian village of La Penita, where up to 2,000 migrants stuck there have set fire to facilities and damaged vehicles in their demands to be set free.

The mayor told media that the town's residents "have for months been worried and scared" and had taken to threatening vigilante action.

Another migrant population has built up in the Lajas Blancas migration station in the same Darien Province bordering Colombia while Panama builds a new camp.

"This is like a pressure cooker," Walter Cotte, regional director of the Federation of the Red Cross and Red Crescent for the Americas and Caribbean told French media in August. 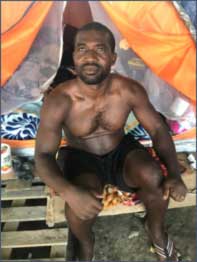 While the governments of Honduras and Guatemala have broken up several U.S.-bound migrant caravans to enforce their own coronavirus border closures, extra-continental migrants obviously still get through to Mexico with the aid of smugglers, individually and in small groups.

In October, Brazilian and American federal agents broke up a human smuggling network that kept very busy transporting Yemeni migrants. That bust came on the heels of one in September, also in Brazil, that moved Iranians to the American border, which followed the breakup of a smuggling network in August that moved hundreds of Sri Lankans.

But they kept coming despite these setbacks.

According to a just-released Mexican government report on migration, 8,992 Africans reached Mexico between January and October 2020. The Mexican report is opaque on details for migration from other countries outside of the Americas, all of which are accounted for.

One category described as "unspecified" has 17,043 migrants arriving on Mexican territory — again, not from the Americas. Another 21,280 hailed from the island archipelago known as "Oceania" between Asia and the Americas extending from Mexico's Pacific side, according to the new report. All of those numbers were up compared to the last couple of years. 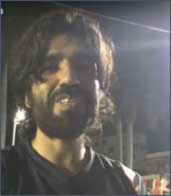 Mexico's national guard has been blocking extra-continental migrants who arrive in its southern states from proceeding north since June 2019, but as CIS reported earlier this year, smugglers known as polleros are still able to get many around the guard's network of 50 roadblocks. That's partly why Middle Easterners, Haitians, Cubans, and Africans are still able to reach the U.S. border these days.

It's not just CIS that has been warning of this peculiar kind of migration crisis in 2021, either. The Department of Homeland Security has explicitly warned about the dangers of an extra-continental migrant surge, too, especially as it relates to terrorist infiltration.

DHS: "Vulnerabilities may create an environment that foreign terrorist organizations could exploit."

If the incoming Biden administration chooses to not hear or see analysis coming from CIS or security hawks, it should take at least some cues from the professional career intelligence community analysts who wrote the Department of Homeland Security's recently released first national threat assessment. 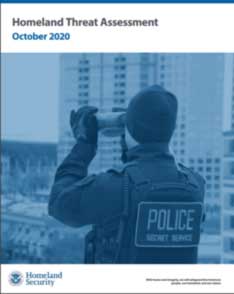 When it was released in October, the assessment gained widespread media attention and drew no serious credibility challenge for its conclusion that white supremacist violence posed a top domestic national security threat in 2021.

But the DHS assessment also predicted a significant surge of migration from outside the western hemisphere to the southern border, among them a kind of migrant the authors somewhat ambiguously referred to as "threat actors".

The assessment said this about a surge of migrants it predicted as coming to the southern border from around the world:

"Although the majority of migrants do not pose a national security or public safety threat, pathways used by migrants to travel to the United States have been exploited by threat actors," the report states. "As a result, surges of migrants could undermine our ability to effectively secure the border."

The assessment goes on to make reference to foreign terrorist organization interest in probing for "vulnerabilities in US immigration and border security programs". It said that, "Collectively, vulnerabilities may create an illegal migration environment that FTO's [foreign terrorist organizations] could exploit to facilitate the movement of affiliated persons toward the United States."

Let the DHS assessment stand as an early warning that the Biden administration should prepare for extra-continentals in a way that must be different from anything it has in mind for Spanish-speaking migrants, who also are expected to rush the southern border sometime in 2021.