Will We See a 'Biden Effect' at the Border? 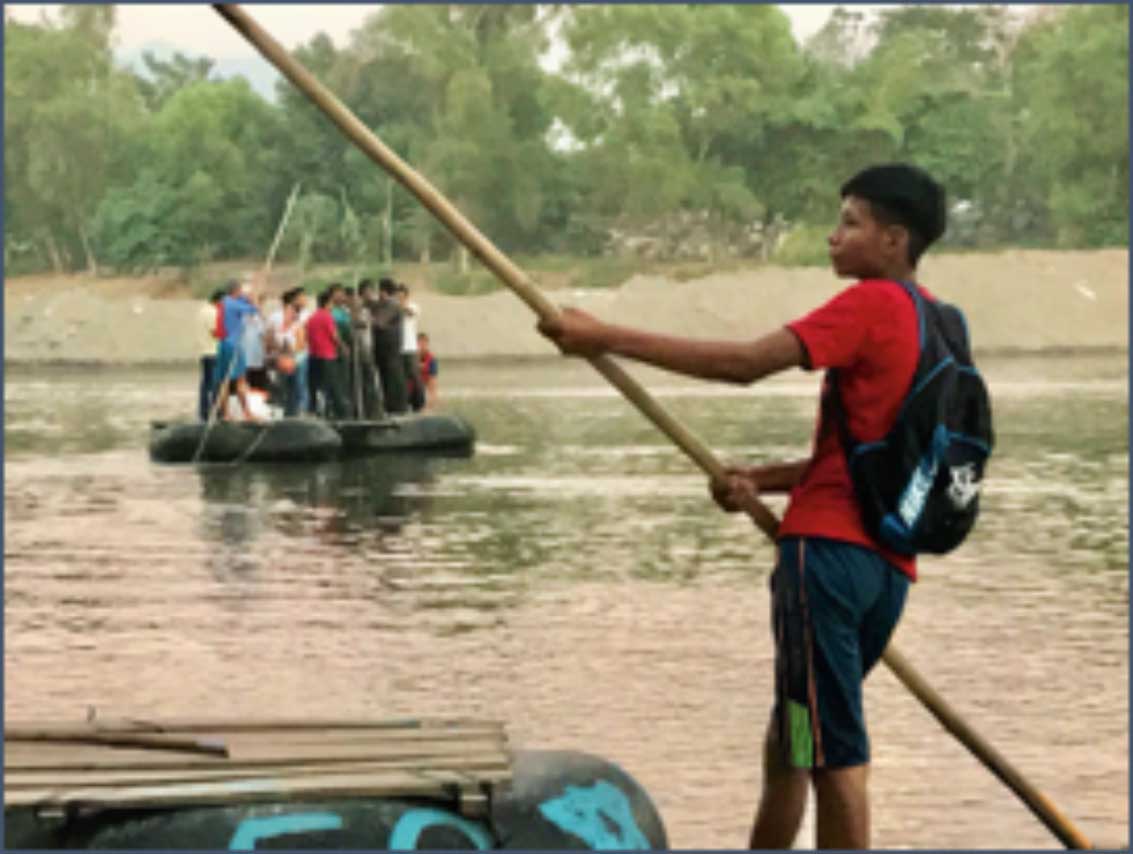 Migrants being floated over the Rio Suchiate border from Guatemala to Mexico, January 2020, where they were required to apply for Mexican asylum if they want to stay. Photo by Todd Bensman.

A few months after President Donald Trump's 2016 election, official Texas State business brought me to two ICE immigration detention centers in South Texas. As a manager in the Texas Department of Public Safety's Intelligence and Counterterrorism Division, I had been coming to these normally noisy, filled-to-capacity facilities for years to interview detainees.

But the South Texas ICE Processing Center in Pearsall stood about as empty and silent as a ghost town, besides the Pakistanis and Somalis I'd come to see who'd been in for a while already. Same situation at the larger, usually packed-to-capacity Port Isabel center near Brownsville a few weeks later.

The empty hallways and cells at that moment were stark manifestation of a phenomenon that became known as the "Trump Effect". ICE intelligence officers at the facilities explained it to me at the time: Populations throughout Latin America, after hearing candidate Trump swear to build a wall, hike deportations, and otherwise crack down on illegal border entries, chose to shelter in place rather than cross the border. Apprehensions fell more than 70 percent for a time.

But now, the nation may face the equal but opposite "Biden Effect" should there be a change in administrations.

A Biden Effect could look like a sustained migrant crisis of the sort the United States and Europe have experienced from time to time. In this case, hundreds of thousands of Central Americans and others from around the world who have by now fully absorbed Biden's campaign promises — a reversal of virtually all Trump immigration policies, an end to most deportations, free medical care, access to other welfare benefits, and various amnesties — could cross through Mexico once again. If unopposed, the first migrants — some in caravans, others travelling individually — would swamp U.S. border asylum systems, and detention facilities. This is not without precedent, like the 2014-2015 unaccompanied-minor crisis and the 2018-2019 Central American caravans crisis.

Additional migrants, seeing the vanguard caravans succeed unhindered, would likely continue for as long as they, too, were unopposed. The swell — nearly a million came over just in 2019 before Trump tamped it down with a medley of policies Biden promises to reverse — would take up long-term illegal residence in cities across the country. They would do so believing that the new administration would do nothing to deport them and everything to sustain them indefinitely until eventual amnesty and citizenship.

If the Trump Effect proved anything, it was that economically distressed foreign populations closely monitor a humming social media communications grapevine about when and how American policies and practices make illegal immigration easier or harder, and therefore make their chances to permanently embed inside the United States higher or lower. Economic migrants are more willing to join caravans or pay big smuggling fees if they feel they can both get in and stay in. They stay home if they perceive they probably will be thrown back, their effort and payments for naught.

While Trump did much to decrease the chances for migrants successfully embedding in the U.S., Biden has messaged policies that all but guarantee success, starting with the reversal of Trump immigration policies by executive order, and going even further. For instance, one message heard very loud and clear was his March 2020 promise of a deportation moratorium on all illegally present aliens — to include even most criminal aliens — during his first 100 days in office, to be followed by a permanent extension for everyone but the most hardened criminal alien felons ("I don't count drunk driving as a felony," he even said).

Biden's online immigration platform offers a powerful incentive for resumptions of caravans that brought a million migrants in during 2018-2019 before Trump finally broke their momentum with a slew of different policies. Biden has promised to end the highly effective "Remain in Mexico" pushback policy that keeps largely ineligible asylum claimants from disappearing into the American interior after they lose or abandon their claims.

During one primary debate, Biden was among those who raised his hand when the moderator asked which of them would favor providing illegal immigrants with free access to the nation's medical care system.

The shiniest gold ring Biden has dangled before the poor of Latin America and beyond is likely his promise to prioritize "a roadmap to citizenship for nearly 11 million undocumented immigrants". Regardless of the details of any such legislation, it would serve as a powerful incentive, sending the message that anyone who manages to get over the border would stand a good chance of securing permanent legal status.

All of this is more than merely pleasant music to the ears of people aspiring to live and work in the United States and to human smugglers and caravan organizers only too happy to facilitate. Taken altogether, it is reasonable to predict a sustained migrant crisis in the event of a change in administrations.

I reported early clues suggesting this prognosis during a January 2020 reporting trip to the Mexico-Guatemala border, where I interviewed migrants who, to my surprise, repeatedly told me that, because their chances of reaching the United States and staying had fallen to unacceptable lows under Trump, they would wait in Mexico, expecting him to lose reelection and a successor to remove the barriers. Tens of thousands like them were applying for Mexican asylum at the time because the Mexican national guard blocked all the roads north (at Trump's insistence) and Mexico was threatening to deport them unless they applied for Mexican asylum. As one of many of the Central American migrants and Mexican officials told me, of the decision to hang out in Mexico until Trump lost: "I'll wait for that because it would make things easier to get in."

An El Salvadoran woman coming to Mexico with a child said she'd chosen to live in Mexico, too, on the gamble that "Once Trump is defeated and the Democrats take over, things are going to get better."

Alma Delia Cruz, head of Mexico's asylum office in the southern state of Chiapas, told me she knew the majority of 70,000 asylum applicants her office was processing (up from just 76 the year before) had no intention of staying in Mexico for long.

"This is just their first chance to get into the United States, of course," she told me. "I don't know what's on the minds of these people exactly, but the threats from Trump can't deter them from eventually getting into the U.S."

Other reporting has since confirmed the use of Mexican asylum as a temporary tactic, such as this April 2020 El Paso Times report quoting migrants equivocating as to whether they'll settle for the great Mexican Dream or head to the U.S. border even if they get Mexican asylum.

The tide of Central Americans applying for Mexican asylum continues to build as the American election draws nearer. And the applicants are not only Mexican but from all over the world. Thousands of Haitians, Africans, Cubans, and Middle Eastern migrants also are applying for Mexican asylum, adding to those likely to head for the U.S. the moment American defenses begin to falter.

What Would Mexico Do?

In June 2019, Trump threatened Mexico President Andrés Manuel López Obrador with ruinous economic trade tariffs on all U.S.-bound exports if he did not halt the migrant caravans crossing his country's southern border with Guatemala. Obrador complied by deploying some 6,000 Mexican National Guard troops on more than 50 roadblocks throughout Mexico's border states, essentially bringing northbound migrant traffic to a halt.

Caravans have regularly battered themselves apart against the bulwark of the rather implacable Mexican national guard troops, who rounded them up by the thousands and bused them back to Central American countries. But they keep forming, relentlessly probing and testing this one most effective defensive perimeter, looking for the moment of opportunity when it goes away.

If a President Biden chose not to maintain Trump's tariff threat, Mexico would likely redeploy its troops elsewhere. Overnight, Mexico could return to its traditional role as a migrant-transit superhighway to the U.S. border.

Still, predicting migration flows isn't the kind of bet on which to place real money, since trends can be notoriously unpredictable and susceptible to unforeseeable factors. The Trump Effect eventually wore off once migrant communities noticed that campaign promises were taking quite a long time to actually be implemented and then, when some of them were, contributed to a rush on the border in 2018 that Trump had to counter in ways no one could have envisioned at the time (such as threatening Mexico trade tariffs). Likewise, a Biden administration, seeing an initial rush on the border in the wake of Democratic victory, might not follow through for quite some time with its policy promises and, ultimately, if the new president decides mass migration must be stopped, he may be forced to leave some of Trump's policies in place.