'The immigrants are getting behind us' 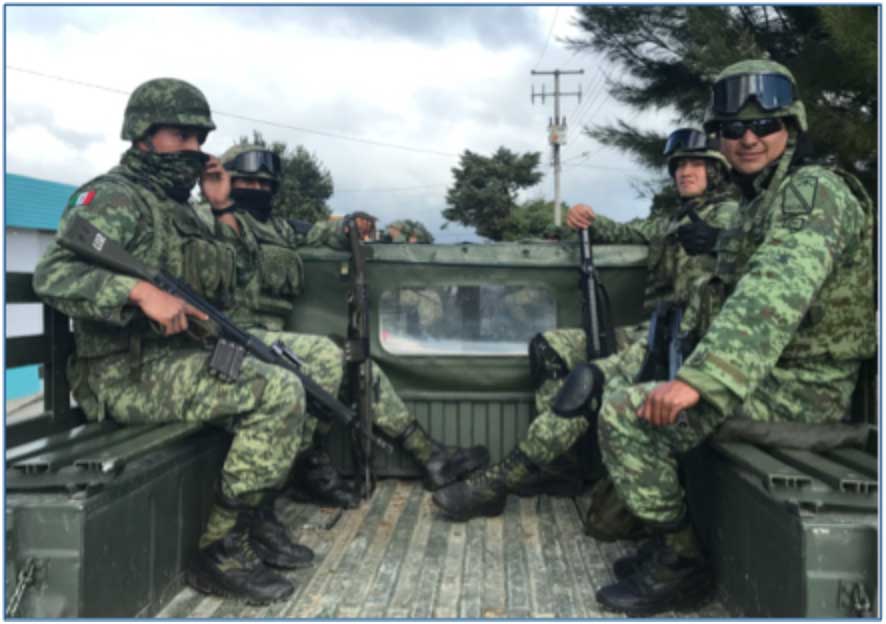 COMITAN, CHIAPAS STATE, Mexico — In full battle-rattle with their shoulder-slung automatic rifles, body armor, and helmets, troops of Mexico's national guard posed a menacing kind of stop sign at a major highway roadblock just north of this Mexican city of 100,000.

The soldiers were providing muscle to the unarmed, white polo-shirted Instituto Nacional de Migración (INM) officers who were searching random mini-buses, cars, and commercial trucks for migrants trying to sneak past to the American border.

In one stop, the INM officer in charge of this inspection check point, who was not authorized to give his name, climbed aboard a minibus and emerged with two Guatemalans. No papers. An INM van would drop them off the next day at a Guatemala border crossing.

Since summer 2019, this scene has played out repeatedly on larger scales at more than 50 such road blocks across southern Mexico, with apprehensions of untold thousands of migrants from cars, trucks, and commercial buses. The Mexican deployment of 6,000 national guard troops undergirds a broader policy response demanded of Mexico by President Donald Trump, under threat of crippling trade tariffs, to end the migration tsunami that put nearly a million Central Americans inside the United States during 2018-2019.

By many measures, the deployment has worked something like a miracle. But the INM officer, reflecting on this small interdiction, admitted his men are catching fewer and fewer this way. A chink in the armor is expanding: the smuggling end-run.

"This post will continue as long as it's needed, but right now we are assessing it because the immigrants are getting behind us."

His observation that migrants are being smuggled around his checkpoint tracked with those of other INM officials and national guard officers at the Guatemala border and throughout the interior of Chiapas. But it's also obvious at the U.S. border.

Recent Center for Immigration Studies field reporting confirms that the Trump-induced deployment did become a vital linchpin in other Mexican measures that, taken together, can be credited with significantly staunching the human tide.

Long gone is the infamous "conveyer belt" system that brazenly transported hundreds of thousands of Central Americans aboard commercial buses from the Guatemala border to the American one, enabled by the Mexican government's tacit policy of non-interference.

But local human smugglers long known as "polleros" in Chiapas are developing innovative ways to defeat the national guard/INM system of road blocks, sating a demand among migrants trapped for months in southern Mexico by new requirements that they stay in place while applying for asylum. Quite a few seemed willing to risk losing high smuggling fees (between $6,000 and $10,000, according to the Associated Press) to apprehension at the roadblocks.

"We have to cross illegally," said one Haitian migrant stuck in Tapachula who said he is gathering money for a smuggler to get him and his wife to Tijuana, Mexico, for an illegal U.S. border crossing. "Every migrant is going to have to cross the border illegally."

Honduran Michael Colon, deported once already from the United States, arrived in a migrant caravan. He said he brought money to hire a "coyote" smuggler and get back in illegally to rejoin his wife and children.

Not least among the evidence that the Haitian and Honduran have a chance is that U.S. Border Patrol is apprehending thousands like them along the U.S.-Mexico border despite Mexico's southern dragnet. U.S. apprehensions plummeted from a 144,000 peak in May after the June 2019 troop, police, and INM deployments.

But U.S. Border Patrol is still catching migrants of all nationalities in the 40,000-per-month range, according to CBP statistics. 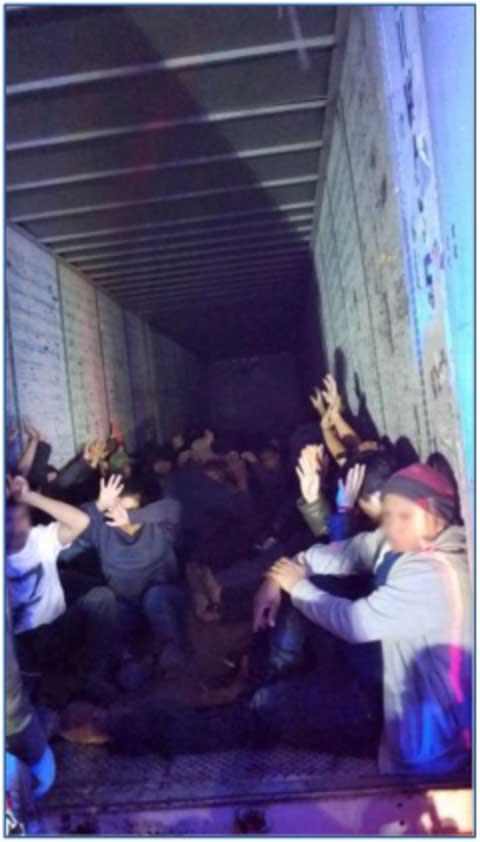 In just a two-week period in January, for a representative example, Border Patrol near Laredo, Texas, seized nine tractor-trailers and detained 276 migrants and eight smugglers. There was the January 15 discovery north of Laredo, Texas, of a truck carrying a Pakistani and Sri Lankans among 61 migrants. A day earlier, Border Patrol seized a truck carrying 33 from Guatemala, Honduras, and China. On January 24, Border Patrol discovered an abandoned tractor-trailer filled with 63 migrants from Brazil, Ecuador, China, and Central America.

"It's making the smugglers react, and now we're seeing the tractor-trailer loads increase, and the stash houses ... increase," Adams noted.

According to CIS interviews with Mexican officials involved in transportation interdiction operations, migrants are hiring polleros from indigenous Tzeltal and Tzotzil communities because they know Chiapas's spider webs of trails and back roads. A game of cat-and-mouse that wasn't necessary before the troop deployment is starting to work.

"They're still coming but not in the buses anymore," said one national guard squad commander in the small cross-roads town of Lazaro Cardenas.

The commander said the polleros are not affiliated with Mexico's violent cartels in the north, but that their local networks do eventually deliver small groups of migrants to them, like batons in a track and field race.

In the south, particularly in rural areas of Veracruz, Tabasco, and Chiapas states, the polleros will move their cargo in three- or four-vehicle convoys between the hours of 11 p.m. and 4 a.m. Sometimes, the migrants are concealed in cargo aboard flat-bed trucks. A scout vehicle ranges far ahead and reports back the locations of troops and roadblocks.

The vehicles are four-wheel drive, so when the scouts locate troops, drivers wheel their human contraband off-road and around.

Observation at numerous roadblocks and inspection checkpoints showed that vehicles are only stopped randomly for searches; many are simply waved through. What national guardsmen did not say is that some of them are probably getting paid to look the other way.

Tania Cruz Salazar, a professor who has extensively studied the region's human smuggling at El Colegio de la Frontera Sur in San Cristobal, said regional smugglers have long paid military and INM officers "not all of the time but most of the time" to let smuggler loads pass. Especially after some permanent inspection checkpoints were put in place 15 years ago.

"You do realize that the smugglers have a price that covers payments for every checkpoint," Salazar told CIS in San Cristobal, a center for the region's indigenous community. "For that, they'll have a green light."

Although Salazar conceded she is not closely familiar with how this works with the new national guard deployment, an Associated Press investigation concluded that often, through a single-payer smuggler, each migrant may have to pay $35 at the checkpoints to continue through. In a matter of minutes, agents can make thousands of dollars.

An INM officer in charge at one vehicle-inspection checkpoint said the checks are done at random because inspections further north provide multi-layered "filters" so that almost all vehicular traffic is likely to be checked in some way at some point.

The Mexican government has countered the smuggling with new tactics. National guard squads purposefully move from place to place at random times and dates, setting up temporary road blocks, though the resulting traffic backups offer an early clue as to what's going on up ahead.

Federal and state police have been pressed into patrolling back roads, or "the blind spots", as one INM official referred to them.

Plainclothes federal officers in an unmarked vehicle pulled over CIS on one of these dirt back roads not far from Tapachula and spilled out all doors with automatic rifles as several marked state police vehicles simultaneously pulled up to block the road. After his men painstakingly searched the rental vehicle for drugs and checked identifications, a state police commander explained that "migrants are starting to take these back routes since the national guard came."

One of the vehicles, he pointed out, was bought and paid for entirely by the United States, which is supporting this mission to look for drugs and migrants in vehicles and send them back to the border. They also patrol a set of parallel train tracks that lead west toward the Pacific Coast.

Along the Pacific coast in October, a fishing vessel loaded with migrants swamped as it was moving north. Two dead African migrants washed ashore, signaling that smugglers were using the ocean route to evade the interior roadblocks. 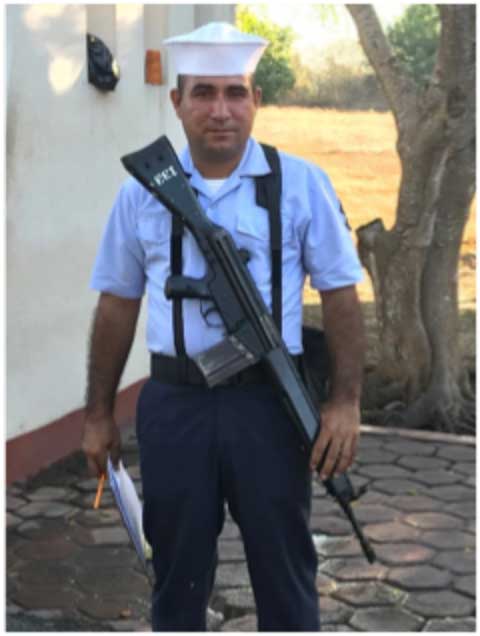 But now the Mexican navy is patrolling, according to local residents and a sea-rescue agency known as the Chiapas Civil Protection Force in two towns along the coast. They report that migrant sailings have become rare or even nonexistent, although this could not be independently confirmed. The Mexican navy declined CIS interview requests.

That human smuggling systems have adapted to the Mexican military deployment should not be read as cause to abandon the effort, so long as ending mass migration remains an American policy goal.

In fact, Mexico's troop deployments and road blockades make possible other deterring policies, such as a requirement that newly arrived migrants face deportation or apply for Mexican asylum while staying in place. Despite inevitable smuggling end-runs and even corruption, these measures have caused spikes in smuggling fees that most migrants will be unable to afford or be willing to risk, since migrants don't exactly get refunds when they are apprehended and returned to square one from either a Mexican checkpoint or the U.S. border, where new push-back policies are expanding under President Trump.

Mathematics and supply-and-demand economics conspire to motivate far fewer migrants to partake in high-rolling smuggling gambits like this than would at the previous Wal-mart price points. The Mexican military presence, as well as state and federal police patrolling of back roads, renders smuggling an expensive, risky economic proposition for a relative few wealthier migrant risk-takers.