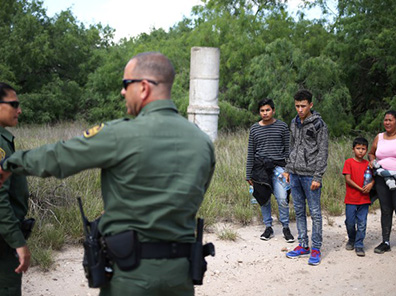 The current crisis at the southern border was predictable, was preventable, and is solely attributable to President Biden and his non-enforcement policies. In the Biden administration’s first full month in office, which also happens to be the shortest month, U.S. Customs and Border Protection (CBP) officers apprehended over 100,000 illegal aliens, consisting of single adults, family units (FMUs), and unaccompanied alien children (UACs). This is a 15-year record high, bucking the trend of unlawful border crossings going down in the winter months. Of this total, just over 29,000 are UACs, nearly double the February 2020 numbers. The UAC numbers are particularly alarming because this is a vulnerable population and CBP facilities are not equipped to hold them.

The Biden administration stopped using Title 42 emergency health authority to quickly repatriate all UACs and is instead releasing them into the interior of the country. The numbers will continue to surge throughout the spring and summer if UACs continue to get a free pass into the country.

As my colleague Art Arthur recently argued, the parents — who are most likely already in the country unlawfully — are funding the smuggling of their children to the border, and it is long past time for the U.S. government to prosecute them. As federal district judge Andrew Hanen noted in 2013, during the Obama administration-fueled UAC crisis:

In a February 2017 memorandum, then-DHS Secretary John Kelly noted that approximately 60 percent of the 155,000 UACs apprehended at the border in the previous three years were “placed in the care of one or more parents illegally residing in the United States.” That’s right: The parents come first, leaving their children in the home country and then send for them (via drug cartels and coyotes) once they’ve successfully entered the country unlawfully. Remind me, who exactly is “separating” families?

To everyone but the Biden administration and their advocacy cheerleaders, what is going on here is obvious. The parents are directly involved in this UAC scheme, whether or not they themselves are already in the United States unlawfully. Yet, oddly, a well-known immigration attorney challenged Arthur on this point, dismissing the clear fact as a “nice talking point for the restrictionist movement”.

Needless to say, that rebuke didn’t age well. Reuters has published an extraordinarily detailed article on smuggling based on interviews with over a dozen self-identified smugglers in Mexico, Guatemala, and El Salvador, and with Central American parents who confirmed their complicity in smuggling schemes. The article leads off with an anecdote of a Honduran mother, identified as Alicia Cruz, who was surprised that she and her unnamed 17-year-old son were quickly removed from the country (presumably under Title 42 authority) while UACs were allowed to stay. As I predicted, yesterday's failed FMUs turn into tomorrow’s successful UACs. Sure enough, Cruz admits that she promptly contacted a smuggler to take her son across the border by himself.

This story is not unique. More than half of the smugglers who spoke with Reuters confirmed that they had smuggled UACs within the past few weeks. A Mexican smuggler who “specializes” in smuggling children revealed that his most recent trip involved smuggling 17 UACs and that “the majority of their parents were already living in the United States.” Three smugglers admitted that they cite Biden administration policies as part of the pitch to smuggle Central American children to the U.S. southern border. “It’s good to take advantage of the moment, because children are able to pass quickly,” said a Guatemalan smuggler. “That’s what we’re telling everyone.”

The winners and losers of the Biden administration’s reckless policies are obvious. Business is booming for drug cartels and coyotes, whom Reuters notes charge thousands of U.S. dollars per smuggled child. Illegal aliens in the United States who abandoned their families to sneak into the country first are “reunited” with their children, with the U.S. government handling the final leg of the smuggling operation. Despite making it to the United States, the UACs are losers in this ordeal as they are subjected to horrific conditions and abuse throughout the journey, which likely will scar them for life. And, of course, the American people and the rule of law are the biggest losers of all. The government-sanctioned mass importation of illegal aliens will burden schools and hospitals and the unlawful wages paid to illegal aliens will depress the tax base and make it harder for citizens to make a decent living. Considering it takes over 20 years to deport a criminal alien gang member with two felony convictions, this new population of illegal aliens likely feels confident that they will never be removed to their home countries.