The Next ‘Del Rio’ Mass Migration Crisis Is Already Brewing in Yuma, Ariz. — and About To Get Worse 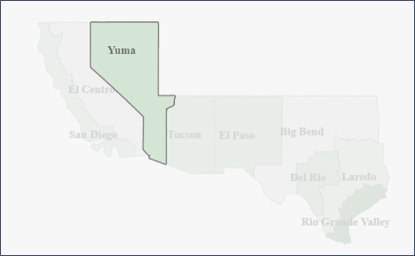 Before a Del Rio, Texas, migrant camp of 15,000 briefly captured national and White House attention, another volcanic rupture point in the southern border fault line was already flaring: this one in Yuma, Ariz.

In a sign that the Department of Homeland Security sees the Yuma Sector as poised to blow even more out of control, agents in other still-beleaguered sectors have been called in to help process an international medley of migrants streaming through this desert wilderness on the California-Arizona state line. Swells of border-crossers have forced the government to establish temporary tent shelters to process many of the illegal migrants into the country.

From October 2020 through August 2021, the most recent U.S. Customs and Border Protection apprehension numbers available, agents encountered 91,841 migrants from mostly Haiti and South America, but also from around the world. In August alone, agents encountered 17,097 migrants, up from 684 that month in 2020, the highest of all nine sectors. That’s a 2,400 percent spike through August 2021 compared to the same time frame in 2020.

Of course, 2020 numbers were at an historic nadir because of pandemic policies that year. But even adjusting for that, the numbers coming in through Yuma on a monthly basis show that something new and very different is afoot.

The rate of entry has sharply escalated through the year. For instance, 990 were encountered in November 2020, which quintupled to 5,128 in February and hit more than 17,000 in August.

The data suggests an eruption of fairly epic proportions in the Arizona desert along the Colorado River.

Federal authorities there have been forced to reopen temporary tent shelters in preparation for expected worse to come, a spokesperson told CIS, and have issued a call for Border Patrol agents in other sectors to come help process migrants. This siren call for help has become familiar since the Biden administration took office in January and immediately began accepting hundreds of thousands of family group migrants into the country, which of course only accelerated more of the same.

Some 900 people cross per day at a spot known euphemistically as “The Gap”, for the Morelos Dam bulwarks that allow for easy crossing of the Colorado River from the Mexican town of Los Algodones right into a short, unfinished section of the U.S. border wall.

#YumaSector #USBP agents apprehended more than 2,500 migrants who illegally entered the United States from Mexico over the holiday weekend. This photo from the field captured a group of 71 that entered early Monday morning. #BorderSecurity is #NationalSecurity pic.twitter.com/At60curIh0

For the weekend of September 20, for instance, while the nation and media focused on the Del Rio Sector’s sprawling migrant encampment, Chief Clem announced that his agents apprehended more than 2,400 migrants. He reported similar numbers for earlier recent weekends, as well, including 1,000 encounters in a single day, “a new fiscal year record for daily apprehensions”.

Yuma Is Worse than Del Rio and About To Get Far Worse, but No One Cares — Yet

#YumaSector agents encountered more than 1,000 migrants who illegally crossed the border into the U.S. from Mex on Thursday, a new fiscal year record for daily apprehensions. The total includes migrants from 21 different countries. #BorderSecurity is #NationalSecurity pic.twitter.com/Ax2mpUkDbL

The chief’s tweets aren’t exactly going viral, as did each development in the recent Del Rio crisis. But the Biden-induced Yuma circumstance towers over the Biden-induced Del Rio one, numerically and in human toll.

That’s why the migration blow-out in Yuma — and the underlying border-wide crisis that has spawned it right alongside Del Rio — warrants immediate attention. It is the latest weak link that migrants have discovered on the southern border. And as bad as Yuma is now, it is likely to get much worse, fast, as a consequence of two factors.

The first is the fact that migrants who successfully identify and breach such openings — and then reap the rich rewards of being legally ushered inside the country to stay, as the Biden administration allows for most family groups — effectively summon even more. One cannot overstate the power of selfies that those in front send to those behind.

The second factor is that a massive wave of 95,000 mostly Haitian migrants is reportedly on the way through another gap, the so-called “Darien Gap” between Colombia and Panama. Even the New York Times has finally admitted that a great many seem to be coming because of Biden’s leniency in allowing them in once they illegally cross the southern border.

The Center for Immigration Studies had already reported the surge this past summer from along the Costa Rica-Nicaragua leg of this trail out of the Darien Gap. CIS reported predictions of the surge prior to Biden’s election, and then when it began through the Darien Gap all year, here, here, here, and here.

What deserves special attention is that the traffic coming through the Darien Gap and then, ultimately, to “the gap” in Yuma does not merely represent a failure of duty to protect in the face of mass lawlessness. This traffic poses a distinct national security threat, the CIS reports point out, since significant numbers hail from countries of terrorism concern and vetting systems tend to fail when under the stress of mass-migration episodes.

Treating the Symptoms or Curing the Problem?

In the Del Rio case, President Biden moved swiftly to liquidate the camp that formed there, mainly because it became a political problem. But the administration has yet to indicate that it understands Del Rio — and now Yuma — are not really problems so much as symptoms of a problem, which is that the administration emphasizes a migrant entry-and-stay policy bestowing rewards for illegal behavior. Rewarding illegal and unwanted conduct quite naturally perpetuates the historic mass-migration crisis we see now, border-wide. The administration seems intent only on expanding entry-and-stay, rather than hard deterrence measures, which would end this mass migration crisis if they were ever applied border-wide.

Until the Biden administration shifts from rewards to deterrence, expect more Del Rios and Yumas for years to come.