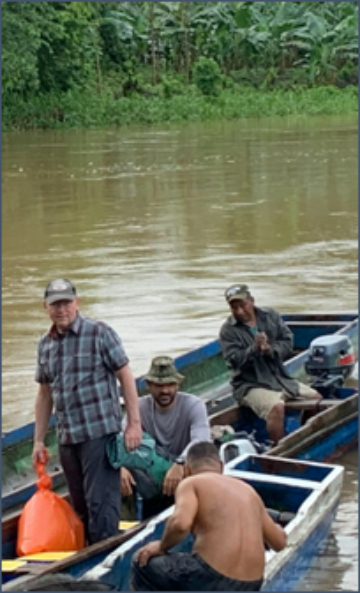 Wisconsin Rep. Tom Tiffany in the Darien Gap jungle during an unofficial trip, May 2021. Photo provided by Rep. Tiffany.

A record 10,000 so-called “extra-continental” migrants from around the world poured through the notoriously untamed Darien Gap jungle passage between Colombia and Panama, bound for the American border, in the single month of May, according to two journalists and a U.S. congressman who recently returned from the region. Amid the flood of humanity are many special interest aliens from nations of U.S. intelligence community concern for terrorism.

In December, the Center for Immigration Studies predicted the surge in extra-continental immigration once President Joe Biden entered office with plans to implement the law-enforcement-free and ad hoc immigration leniency policies he had promised during the 2020 campaign, what I termed “clarion calls of welcome”.

That influx became evident by February and March, as CIS reported. But the numbers have now ballooned to previously unrecorded rates, said Yon, who has been reporting on both the Panama and Colombian sides of the Darien Gap for several months alongside American journalist Chuck Holton, who lives in Panama. The two journalists recently escorted Wisconsin Rep. Tom Tiffany and another Republican congressman (who did not want to be named yet) to where the Darien Gap trail ends in Embera Indian villages to observe the U.S.-bound influx first-hand.

Rep. Tiffany, who spent four days on the ground at his own personal expense and in an unofficial capacity, said he came away from the experience alarmed at the national security consequences of such high numbers of strangers on their way through Panama at a moment when the U.S. border is “overrun” and vulnerable. He said the trip confirmed what he heard during a recent congressional trip to the southern border from a ranking Border Patrol official that terrorist suspects fairly routinely cross it from a smuggling pipeline that runs through Panama. 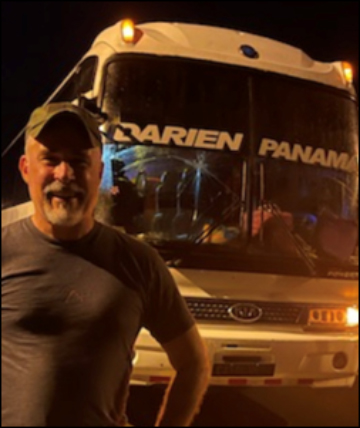 At one trip up a Panamanian river on the route, Tiffany counted 16 large boats filled to capacity with immigrants of all different nationalities.

“What gives you pause is that each country’s security people — whether its Border Patrol in the U.S., or SENAFRONT down in Panama — they just cannot handle the crush. It’s so easy at this point for someone who has ill intentions for America, who wants to commit a terrorist act, to meld in with these migrants traveling through, to get into America.”

“There are so many coming. We have no idea who they are. It’s easy for the bad guys right now to get into our country because the system is overwhelmed,” he said.

Pregnant Women and Families in Abundance Propelled by Biden Election

For context, anywhere from 8,000 to as high as 20,000 immigrants have crossed through the gap in normal calendar years past. But the International Organization for Migration in April reported that 11,370 extra-continental migrants reached Panama between just January and April. May alone is going to come in at a minimum of 10,000, with the bulk of the year still to come, said Yon, who bases his estimate on flow rates into certain indigenous villages, interviews with Panamanian police, and non-government organizations that have arrived to help the migrants. 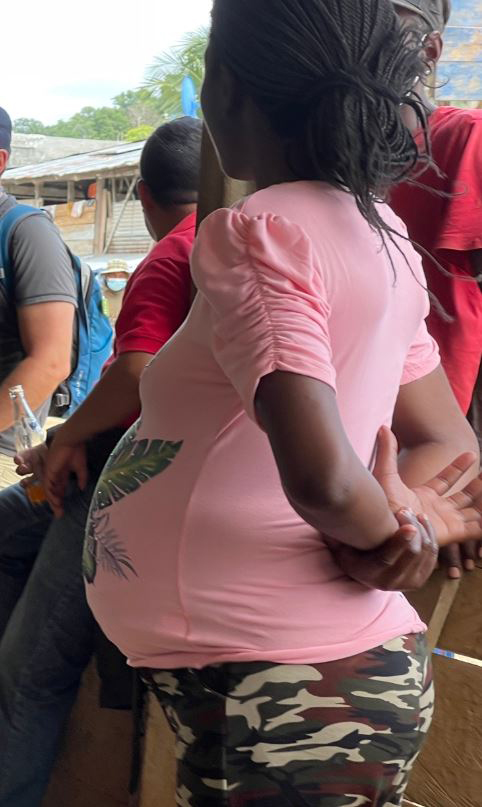 The migrant flood has so severely strained Panama’s ability to manage it that the country on May 20 ordered a closure of its 165-mile wilderness border with Colombia. But as smugglers and immigrants well know, the order cannot be enforced since it runs through ungoverned wilderness, especially not while Colombia neighbors — Ecuador, Brazil, and Peru — remain open.

A majority of the immigrants driving toward the U.S. southern border, where they will soon exploit management systems already staggering under an historic crush of illegally entering immigrants from Central America and Mexico, originally hail from Haiti, Cuba, and sub-Saharan Africa, Yon and Holton said.

A great many of those are families with children and — especially notable to Yon — late-stage pregnant women who feel induced to attempt the often-deadly journey upon learning “somewhere along the information chain” that Biden’s administration is quickly legalizing those immigrant demographics in large numbers, Yon said.

“They’re getting that information,” he said.

Said Holton: “We are told that these women are intentionally getting pregnant in order to get into the United States. We saw a lot of pregnant women. I was pretty astounded. I even asked, ‘what are you even thinking, coming through this jungle pregnant.' And they’re saying like, ‘I don’t know.’ They don’t see it as irresponsible. It’s just what you do.”

Many of those who survived the Biden-induced trek through the jungle, independently in separate interviews, described to Yon and Holton the bodies they saw all along the trail.

To Rep. Tiffany, all blame for the bodies and suffering of many more women and children than in pre-Biden days fall on the president's shoulders.

“We’re hearing of children floating down the river after not being able to survive,” Tiffany said. “You hear of children who leave the gap with their parents dead behind them. We heard those stories consistently. We took pictures of people being carried into the medical facility. This is all happening because of the green light that came on January 20,” the Biden inauguration.

The administration denies its policies are propelling mortal journeys or the mass-migration crisis, which government statistics indicate sharply escalated after Biden took office.

Most Who Will Claim U.S. Asylum Already Lived in Protected Peace and Prosperity

Almost all of these extra-continental migrants will apply for political protection under U.S. asylum laws to prevent deportation to their home countries, where they say political persecution awaits them. But Chuck Holton and Michael Yon noted that virtually every immigrant they interviewed already had lived and worked in protected status for years — in the South American nations where they first arrived. Many coming off the trail in Panama were well equipped, carried late-model cell phones, and easily replenished their money reserves by wire from family and friends still in South America.

Of the several hundred immigrants Holton said he and Yon have interviewed who likely will claim U.S. political protection from deportation to home countries, they found only a single one who had actually come recently from an objectionable home country.

“All the rest have been living in Chile, Ecuador, and Brazil for three or four years. That shows that they knew there was no use in trying to make into the United States for four years under Trump until a new president got in and they could head north,” Holton told CIS (see video of Holton interviewing immigrants). “Those people started to slow down and stop because of Covid and Donald Trump, and now that Covid is lifting and Trump is gone, they’re making a mad rush for it because they’ve got to get in while the getting is good.”

Two men the journalists encountered, for instance, were Egyptians who’d been living for years already in South Korea, obviously prosperous, well-educated, and certainly in no need of the U.S. asylum they will almost certainly claim at the border.

“The only reason they would ever think to walk through the Darien Gap is there is no other way to get north without a visa,” Holton said.

Yon and Holton said they encountered military-aged single men from Islamic-terrorism-plagued countries besides Egypt, including Yemen, Pakistan, and Bangladesh.

My book, America’s Covert Border War: The Untold Story of the Nation’s Battle to Prevent Jihadist Infiltration, details instances when American authorities stationed in Panama, Costa Rica, and Mexico had found and detained terrorist suspects from Yemen, Somalia, Pakistan, and other countries as they migrated through from the Darien Gap. One Somali, for instance, went on to cross the California border and eventually conduct a double-vehicle ramming attack in Edmonton, Alberta, Canada, while carrying an ISIS flag.

Another Somali was caught in Costa Rica and deported. Six Pakistani suspected al-Qaeda terrorists were detained in Panama, which in recent years had processed 49 terror alerts regarding migrants passing through, the book explains. Mexico announced in 2020 that it had caught and deported 19 terror suspects. This year, as CIS detailed, two Yemenis were caught near Calexico, Calif., after separate illegal border crossings and were found to have been on the FBI’s terrorist watch list, not an unusual occurrence. One of the Yemeni migrants also was on the No Fly List and was found to have been hiding a cell phone sim card inside the sole of a shoe.

“They did interdict and find some,” Tiffany said. “But how many have they not found”?

What especially galled him was watching “bus after bus after bus come streaming out of the Darien Gap and taking the Pan American Highway” to the U.S. southern border filled with complete strangers from countries like Yemen, Pakistan, and Egypt.

He was referring to a policy known as “controlled flow”, by which the governments of Panama and Costa Rica typically provide shelter, medical treatment, and buses that move migrants coming out of the gap into Nicaragua. That number is at least 300 a day now, Tiffany, Yon, and Holton estimate.

Tiffany said he believes the American public has no idea that any of this poses higher than usual risks given the collapsing U.S. border control systems at the moment, and so he plans to speak openly about what he learned on his Panama trip.

“The Panamanian people are doing the best they can; they just pass them through. We can’t blame them for that,” Tiffany said. “It’s American actions that caused this. The American public needs to know about this ... that the public policy choices that are made can have dire consequences.”