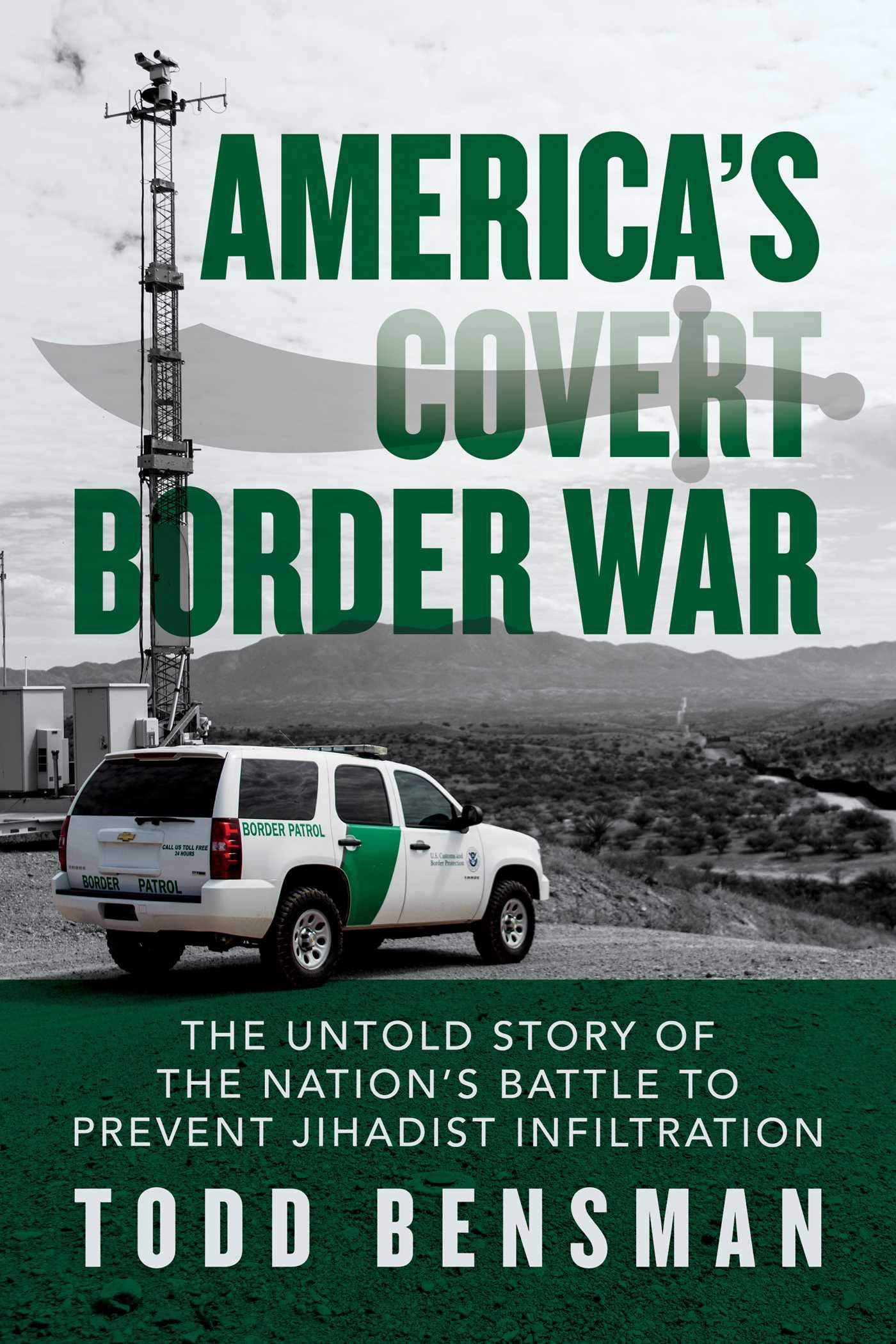 Order a copy of America’s Covert Border War: The Untold Story of the Nation’s Battle to Prevent Jihadist Infiltration from Amazon, Barnes and Noble, Bookshop, Books-a-Million, or Indie Bound.

This is the untold story of a secret American border program created to prevent terrorist infiltration over the U.S. Southwest Border, how it succeeded in apprehending jihadists, why it’s failing at a time when the risk of border infiltration attack is elevated, and what should be done to repair the enterprise before Americans finally suffer the consequences.

Americans concerned by unchecked global migration, porous borders, and national security will feel surprised to learn that thousands of migrants from the Islamic world breach the U.S.-Mexican border each year, despite widespread media insistence that these long-haul travelers are imagined, as are the hardened jihadists caught among them each year. This is an intelligence world insider’s untold story of the ambitious and intrigue-laden covert American counterterrorism programs built after 9/11 from the U.S. border to the tip of South America. These programs were created to protect Americans from a supposedly notional infiltration threat that has been killing and wounding hundreds in Europe in recent years. The surprising conclusion: the American effort has prevented attack on the homeland so far, shielding an unknowing nation from the migrant-jihadist bloodshed Europe has suffered as a result of organized terrorist border infiltrations that began in 2015 and have continued since.

But how much longer can these programs keep America safe from the same threat without the public recognition that they exist, and the care and attention that they deserve? This geographically sprawling counterterrorism enterprise—the last unrevealed one from the 9/11 era—is suffering from denialism and neglect at America’s peril…just as Europe was before its calamity with mass migration from the Islamic world. It has not kept pace with an evolved human proliferation threat tied to global migration flows of volumes not seen since World War II. But this book is much more than revelation and complaint; it provides solutions for the nation’s leaders to better protect America from this unusual border threat.

While America’s Covert Border War was written before Joe Biden unleashed a migrant crisis on our southwestern border – by essentially opening up the floodgates – it is important for Americans to see beyond the self-interested chatter of pro-mass-migration advocates. That’s because de facto open borders, “catch and release,” and an overwhelmed border security system are viewed as an invitation and an opportunity not only by economic migrants, but also bad actors ranging from criminals to terrorists.

America’s Covert Border War is a singular contribution to reporting on the nature of America’s post-9/11 efforts to secure the U.S. homeland, and a necessary refutation of a lie by omission that a politicized media has perpetrated upon the American people.

You don’t hear much about what’s going on behind the scenes to stop terrorists from coming over the border. Certainly, much of it is classified, because it might compromise sources and methods used to intercept plots. But the left wants you to think there isn’t much of a threat, it’s just hype meant to justify strict border laws that keep out Hispanic illegal immigrants. Fortunately Todd Bensman, a counterintelligence expert who covered national security as a journalist, has written a book revealing this secret work. ... He asks why our political leadership on both sides of the aisle set in place an extensive counterterrorism enterprise on the southern border if there was no threat.

Bensman delivers an accurate and nonpartisan look at the threat, details what the American counterterrorism effort has done behind the scenes to address it, and how the counterterrorism project can be strengthened as the threat of terrorist infiltration intensifies.

Bensman ... provides revealing insight into a little examined, yet vital topic. As he shows, America’s southern border is one vulnerable point of entry for jihadists into the United States, which only often unheralded vigilance has kept closed. Maintaining this vigilance will require wider public understanding of the border security operations Bensman has experienced firsthand.

Todd Bensman currently serves as the Texas-based Senior National Security Fellow for the Center for Immigration Studies, a Washington, D.C. policy institute for which he writes, speaks, and grants media interviews about the nexus between immigration and national security. He has testified before Congress as an expert witness and regularly appears on radio and television outlets. Separately, he writes about homeland security for a variety of online publications, and teaches terrorism and intelligence analysis as a university adjunct lecturer. For nine years, through August 2018, Bensman led counterterrorism intelligence for the Texas Department of Public Safety’s Intelligence and Counterterrorism Division in its multi-agency fusion center. Before his homeland security service, Bensman was a journalist for twenty-three years, covering national security after 9/11 as a staff writer for major newspapers and reporting in twenty-five countries. His reporting on migration from Islamic countries and cross-border gun smuggling to cartels earned two National Press Club awards (2008 and 2009), an Inter-American Press Association award, and two Texas Institute of Letters awards. His reporting on corruption spurred numerous federal investigations, indictments, and convictions.

Bensman holds an M.A. in Security Studies from the Naval Postgraduate School, Center for Homeland Defense and Security (2015, Outstanding Thesis designee). He also holds an M.A. in Journalism from the University of Missouri School of Journalism (2009). He holds an undergraduate degree in Journalism from Northern Arizona University. In 2017, he completed a 350-hour State of Texas Command College leadership program sponsored by the Texas Department of Public Safety.

"Todd Bensman is one of the last remaining authentic counterterrorism experts and investigators on jihadist terrorism, whose new book will mesmerize, shock, inform, and totally enlighten you on the covert war against Islamist militants fought by the government inside the U.S., as well as around the world. Bensman is also an amazingly gifted writer whose book unfolds as though one were reading a great crime novel—with a plot line made for a Netflix series. Even though I have specialized in terrorism for more than twenty-five years, I have learned more from reading the work of Todd Bensman than any other counter terrorist official or 'expert' in the world, bar none. I guarantee you that once you open the first page, you won't put it down till the last." - Steven Emerson, Executive Director of the Investigative Project on Terrorism

"Amidst multiple international crises, most of the media has lost sight of the jihadi threat to America. Todd Bensman is a welcome exception. His investigative reporting on continuing terrorist attempts to infiltrate the United States deserves wide attention from specialists and the general public alike." - Clifford D. May, Founder and President, The Foundation for Defense of Democracies

"Drawing upon his unique experiences, both as a counterterrorism professional within the Texas Department of Public Safety, as well as his many years as an investigative journalist, Bensman utilizes a vast range of primary sources to provide an unmatched, richly detailed account of the vulnerabilities to terrorist infiltration that exist at the United States' southern border. Timely and engaging, this book cuts through the otherwise deeply politicized debate that surrounds this topic to give a clear-eyed, factually based account of the treat as we know it, the counterterrorism machinery that was put in place after 9/11 to defeat it, and the worrisome holes in the system that persist to this day. Simply put, it is a must-read for anyone wishing to get to grips with this issue." - Sam Mullins, professor at Daniel K. Inouye Asia Pacific Center for Security Studies

"Journalist and former counterterrorism intelligence manager Todd Bensman shines a spotlight into a complex issue that few truly understand. Trust me when I say this: Bensman has been in the trenches and behind the scenes to safeguard Texas. He deserves our thanks." - Fred Burton, former Diplomatic Security Special Agent and New York Times bestselling author

"Progressives on the cultural and political left harbor a lot of dangerous and seditious ideas about illegal immigration. Chief among them is that lax border enforcement and massive waves of third-world migrants are not an invitation to terrorist infiltration. But Todd Bensman's new book, America's Covert Border War, is even more dangerous and seditious because it speaks plain, powerful truth about the very real problem of jihadi infiltration, backed up by the kind of deep reporting that will challenge the assumptions of even the most willfully ignorant, glib, or smug. The book is a well-grounded warning from a longtime veteran of the War on Terror, as well as a bold rebuke to the media's unfortunate culture of denial, avoidance, and resistance." - William McGowan, author, "Coloring The News" and "Gray Lady Down"

"Todd Bensman provides a deeply disturbing national security perspective to failed immigration controls from Panama through Mexico to the southern borders of Mexico to which we were blind. Bensman now examines the threat of lone jihadists and organized groups moving through those countries to the United States. He knows this world from his reporting on the ground in Central America and Mexico and as a government intelligence worker. With this book, we are far less blind." - Dr. Michael Lauderdale, University of Texas at Austin, Clara Pope Willoughby Centennial Professor

"Bensman draws on his many years studying the U.S.-Mexican border to establish the presence of a major, but secret, national counterterrorism project; then to show the serious neglect that hobbles it; and finally, to recommend solutions. He needs urgently to be heeded, lest disaster come via the Rio Grande." - Daniel Pipes, founder of The Middle East Forum