But the truth is irrepressible

The Investigative Project on Terrorism., April 7, 2021 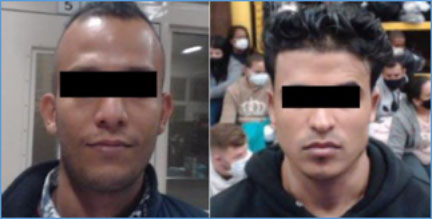 Amid a gathering mass-migration crisis on the southern border comes a U.S. Customs and Border Protection announcement Monday that two Yemeni nationals who illegally crossed from Mexico into California were already on the FBI's terrorism watch list before their arrivals. The agency removed the statement within 24 hours with no explanation, but too late:

One of the Yemenis, it said, also was on the FBI's rarified No Fly list, normally reserved for individuals that U.S. intelligence deems highly dangerous, and had secreted a cell phone sim card in his shoe insole. The press release gave few further details, as an FBI Joint Terrorism Task Force investigation continues. But the nation's chief Border Patrol agent seemed to understand the import.

"Part of the Border Patrol's mission states we will protect the country from terrorists," Chief Patrol Agent Gregory K. Bovino said in a prepared statement for the press release. "Today, like every other day, our agents did that."

CPB said the release "was not properly reviewed and contained certain disclosure and policy information related to national security that required CBP to remove it from our website."

Absent much more context and better information, this short-lived official confirmation seems likely only to confuse an American public that has heard media fact-checkers and Democratic lawmakers for years assert that terrorist border crossings do not really happen. Indeed, the revoked press release landed even before the dust had settled from the latest such public argument over whether terrorist infiltration is a real threat; media organizations like the Washington Post carried stories last month ridiculing House Minority Leader Kevin McCarthy for relaying information about three Yemeni terror suspects and one Serb recently caught after illegal crossings into New Mexico.

A broader public understanding of just how often terrorist suspects like these Yemenis cross has become especially pertinent as the government's border management systems teeter under historic, sharply escalating numbers of largely Spanish-speaking peoples making illegal entry — with 66,000 Border Patrol encounters in January, 101,000 in February, 171,000 in March and far more expected in April and on through the summer months.

So what can be truthfully said of this contentious threat issue?

U.S. Agencies Regard It as Real

My book, America's Covert Border War: The Untold Story of The Nation's Battle to Prevent Jihadist Infiltration, documents that Islamic extremists and those associated with terrorist organizations cross the U.S. southern border in consequential, though low numbers. Terror suspects like the Yemenis travel in an endless stream of some 3,000-4,000 migrants a year from Muslim-majority nations who get categorized in government nomenclature as "special interest aliens". They are able to journey such great distances into Latin American landing and staging nations with the help of specialized global smuggling networks. Their total numbers may be comparatively small, but attack by few portend vastly outsized national consequences.

The book reveals that U.S. homeland security professionals see the threat from special interest alien traffic as so consistently pressing, that they deployed counterterrorism programs at that southern border and throughout Latin America after 9/11. They have repeatedly detected terror suspects and, via deportation, neutralized any potential plots for years.

The programs are divided between a "near war," in which intelligence officers interview and investigate those caught at the border, and a "far war," in which U.S. agencies partner with vetted local intelligence units throughout the Americas to hunt and destroy smuggling networks and capture jihadists en route. Most of those who are caught end up deported in what I term "better-safe-than-sorry" moves that few Americans ever hear about.

Democratic leaders have maintained the secret programs, one of the most recent proponents of them being Jeh Johnson, the DHS Secretary appointed by President Barack Obama.

The details are classified, which makes it hard to inform the American public. But enough information has slipped out and into America's Covert Border War to provide a strong sense of the threat's actual scope.

Every year, about 20 migrants on U.S. terror watch lists are caught at, or on their way to, the American border. While skeptics are correct in noting that being on a terror watch list is not definitive proof of terrorism involvement, migrants who do end up on it present a distinctly higher national security risk dismissed at great national peril.

Many who are not on any watch list, but later found to have connections to terrorist groups, are interdicted every year. Many fly into South America with fake identification and follow the migrant route north.

Between 2014 and 2019, Mexico's National Migration Institute determined that 19 migrants arrested there had ties to foreign terrorist groups. The agency listed them as Somalis, Pakistanis, Bangladeshis, Ethiopians and Yemenis.

American intelligence and law enforcement officers stationed in Mexico almost certainly would have conducted intelligence investigations or interviewed these suspects inside Mexican detention centers. Mexico deported all 19. With them went whatever intentions they might have wanted to carry over the American border.

Last July, the director of Panama's Senafront border agency told a group of Arizona State University journalism students that since 2011, the agency had logged "more than 49 alerts on people from different countries linked to terrorist group." Most were deported, including six Pakistanis found to be associated with al-Qaida who entered from Colombia in August 2016 on their way to the American border. The Panamanians pulled them off the route for American interrogation after they were seen taking photos of sensitive locations like the Panama Canal.

As I report in my book and elsewhere, migrants on U.S. terror watch lists have been caught in in Nicaragua, Guatemala, and Costa Rica. They were investigated by Americans and deported. One of the earliest terrorist migrant travelers to get caught after 9/11 was Afghan al-Qaida operative Feda Ahmed in 2003. His case records have sat unnoticed on a New York Times "Guantanamo Docket" database of declassified files for years, but are now revealed in my book.

Ahmed's apprehension in Mexico caused such alarm that he ended up at the notorious American military prison camp at Guantanamo Bay, Cuba. He was pronounced "an enemy combatant ... based on information possessed by the United States that indicates that the detainee is associated with al-Qaida."

His traveling companion, as well as a smuggler to whom he paid $25,000 for the journey, were both associated with Egyptian and Lebanese terrorist organizations, according to those files.

America's Covert Border War describes one drama like this after another, including separate, frantic national FBI manhunts for suspected terrorists who were successfully smuggled over the border, a Laredo, Texas car chase that ended in a crash and the arrest of a Somali on the terror watch list, and furtive hand-offs of terrorists by Mexico to the Americans on international bridges.

In a first actual attack by a migrant who breached the southern border, a Somali named Abdulahi Hasan Sharif carried out a 2017 double-vehicle ramming attack in Alberta, Canada carrying an ISIS flag. After hitting a police officer, Sharif jumped out and stabbed the wounded officer. He initially got away, striking and injuring four pedestrians before being caught.

Yemenis crossing the border have become a particular concern since a civil war begun in 2014 drew in both Sunni and Shia terrorist organizations as armed combatants. A number of Yemenis who reached the southern border have been associated with terrorism.

In 2019, Moayad Heider Mohammad Aldairi pleaded guilty to operating a smuggling pipeline that shipped Yemeni migrants over the Texas border, sometimes costuming them as helmet-wearing construction workers. At least three of the people he smuggled were on the FBI's terrorism watch list.

Democrats and liberals interested in less or no border enforcement have invested tremendous energy over the years in disputing factual information about this threat. But the facts keep proving irrepressible.

During a televised hearing on March 17, newly-confirmed Department of Homeland Security Secretary Alejandro Mayorkas confirmed the existence of a covert border war against jihadist border infiltration just as described in my book.

Mayorkas acknowledged that jihadist suspects were frequently caught by an "architecture, a multi-layered security apparatus" built to catch them.

"A known or suspected terrorist — KST is the acronym that we use — individuals who match that profile have tried to cross the border, the land border, have tried to travel by air into the United States, not only this year but last year, the year prior and so on and so forth," Mayorkas testified. "And it is because of our multi-layered security apparatus, the architecture that we have built, since the commencement of the Department of Homeland Security, that we are in fact able to identify and apprehend them and ensure they do not remain in the United States.

"And so we actually deny them entry based on our intelligence and based on our vetting procedures, which have only grown in sophistication throughout the years."

To date, the covert border war has done a remarkable job, even with developing cracks and problems in its "architecture." The concern now is that a mass-migration crisis has developed that in the past has collapsed all normal systems. In extreme circumstances when high human volumes overwhelm security processes, all bets are off that the covert border war can function the way it must to catch more Yemenis on the terror watch list.