SCOTUS to Hear Most Significant Immigration Case — Ever

Does the president have the power to ignore the law? We may soon find out. 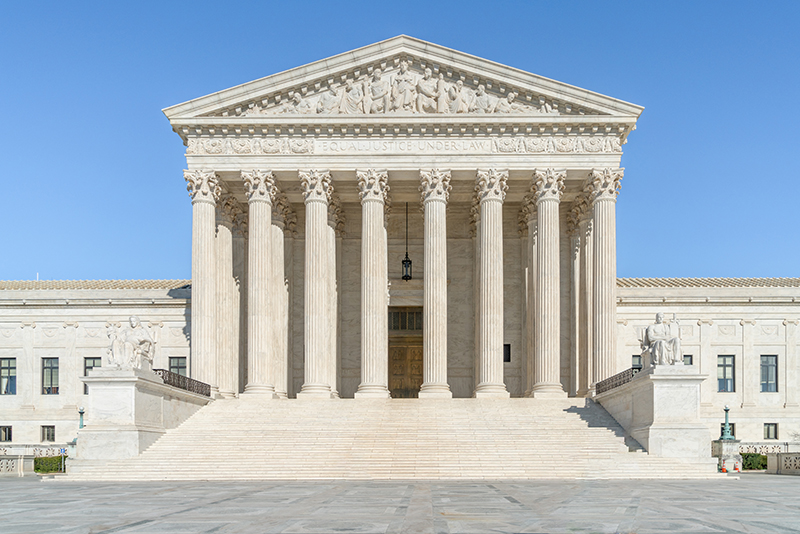 The Supreme Court has granted certiorari in Biden v. Texas, which involves the administration’s termination of the Migrant Protection Protocols (MPP), better known as “Remain in Mexico”. It is no exaggeration to state that this is the most significant immigration case ever because the Court will be considering whether there are any limits on the administration’s authority to ignore explicit congressional mandates in allowing foreign nationals to enter and remain in the United States.

“Remain in Mexico”. MPP was implemented by then-DHS Secretary Kirstjen Nielsen in January 2019 and allows DHS to return “other than Mexican” migrants (OTMs) caught entering illegally or without proper documents back to Mexico to await their removal hearings.

In its October 2019 assessment of the program, DHS determined that MPP was “an indispensable tool in addressing the ongoing crisis at the southern border and restoring integrity to the immigration system”, particularly as related to alien families. Asylum cases were expedited under the program, while at the same time, MPP removed incentives for aliens to make weak or bogus claims when apprehended.

Court Challenges to Remain in Mexico Under Trump. Regardless of its effectiveness, MPP was subject to numerous legal challenges during the Trump administration.

Immigrant advocates moved to block the program in February 2019 in federal district court in northern California, and a judge there enjoined MPP in early April of that year. Shortly thereafter, that injunction was stayed by a three-judge panel of the Ninth Circuit.

A separate three-judge Ninth Circuit panel considering the government's appeal from the district court’s decision, however, affirmed the injunction of MPP in late February 2020, but stayed that injunction temporarily for aliens apprehended outside of California and Arizona, to allow the government to seek Supreme Court review.

Shortly thereafter, in early March 2020, the Supreme Court stayed the MPP injunction pending the government’s filing of, and the Court’s ruling on, a petition for certiorari.

Later that month, removal hearings for aliens who remained in Mexico were put on hold due to the Covid-19 pandemic. And there the matter remained until the 2020 presidential election.

States Challenge the Biden Administration’s Attempts to End MPP. Candidate Joe Biden railed against Remain in Mexico, and in late January 2021, Biden’s DHS suspended new enrollments in the program. Three weeks later, DHS announced that it would begin admitting the approximately 25,000 aliens who remained in proceedings under the program into the United States.

On April 13, the states of Texas and Missouri filed suit challenging the Biden administration’s suspension of MPP, which was assigned to Judge Matthew Kacsmaryk of the U.S. District Court for the Northern District of Texas.

On June 1, while that case was pending, DHS Secretary Alejandro Mayorkas issued a memo terminating MPP. That termination decision was rolled into the pending case brought by the states.

The government appealed that decision and asked a three-judge panel of the Fifth Circuit to stay the injunction, which it declined to do in an order dated August 19. That prompted the administration to file an application for a stay of Judge Kacsmaryk’s order with the Supreme Court, which was denied in a brief order from the Court issued on August 24.

While the underlying circuit court appeal was pending before a different panel of the Fifth Circuit, Mayorkas issued a new memo terminating MPP on October 29.

That termination was set to “be implemented as soon as practicable after a final judicial decision to vacate” Judge Kacsmaryk’s injunction was issued and contained a slightly new rationale for terminating MPP.

On December 13, the Fifth Circuit issued a decision dismissing the Biden administration’s appeal of Judge Kacsmaryk’s injunction, based largely on Mayorkas’ initial termination decision, which thus teed up the matter for Supreme Court review.

Why Biden v. Texas Is so Significant. Tthe latest Fifth Circuit decision is a “doozy” and demonstrates why Texas is the most significant immigration case ever.

Under section 235 of the Immigration and Nationality Act (INA), aliens who enter the United States illegally and those who are deemed inadmissible at the ports of entry are supposed to be detained, from the point at which they are apprehended until they are granted immigration relief and protection or removed.

In lieu of detention, however, section 235(b)(2)(C) of the INA allows DHS to send illegal migrants and inadmissible aliens apprehended at land borders (like the U.S.-Mexico line) back across the border to await their removal proceedings.

That section of the INA was the basis for Trump’s Remain in Mexico program, and in terminating MPP, the Biden administration took that return authority off the table, as both Judge Kacsmaryk and the Fifth Circuit held.

There is one other exception to the detention mandate in section 235 of the INA, but it is extremely narrow. Under section 212(d)(5)(A) of the INA, DHS is permitted to release inadmissible aliens (including illegal migrants) into the United States on “parole”, but “only on a case-by-case basis for urgent humanitarian reasons or significant public benefit”.

Traditionally in the parole context, “urgent humanitarian reasons” meant immediate medical attention, and “significant public benefit” meant that the alien’s presence was required in U.S. criminal court proceedings. Rather than sticking to these limits, however, the Biden administration has been using its limited parole authority to release all illegal migrants that it can’t detain.

Various administrations over the decades have attempted to use parole to exceed the tight constraints Congress has set on immigration to the United States, prompting Congress to even more narrowly limit that authority, as my colleague George Fishman has recently explained.

Texas will be the ultimate test of the limits of the parole authority because the Biden administration’s attempts to expand that power have far exceeded its predecessors’.

In a rule proposed in August, the president seeks to expand the parole power to allow DHS to release any illegal migrant it cannot detain into the United States, while at the same time Biden is asking Congress to cut immigration detention in his proposed FY 2022 budget.

That would enable the administration to release hundreds of thousands of migrants into the United States at a time when Border Patrol agents are apprehending more illegal entrants at the Southwest border than in any prior period in history, and that ICE removals of aliens have plummeted more than 70 percent.

Simply put, the president is attempting to rewrite the immigration laws administratively to bypass Congress. Texas will be the ultimate test of his ability to do so.

How Much Further Could the Supreme Court’s Decision Go? Again, legally, Texas involves MPP and the parole authority, but the ramifications of the Court’s ultimate decision could — and I stress could — extend far beyond Remain and Mexico and the limits of parole.

The detention mandates in section 235 of the INA are exceptionally strict, as the Supreme Court held in a slightly different context in 2018, while parole is extremely narrow, as Fishman makes clear. The Court should hold — as Judge Kacsmaryk and the Fifth Circuit have held — that DHS lacks the authority to release illegal migrants on parole en masse.

If it does, its decision could affect other Biden administration immigration initiatives, such as DHS enforcement guidelines, which ignore other apprehension and detention mandates in the INA relating to aliens present in the United States who are removable on criminal grounds.

That is why Nolan Rappaport, former Democratic staffer on the House Judiciary Committee (where he was my colleague for several years) has argued that Supreme Court review of Texas might not be the best course of action for the Biden administration.

He explained: “Biden may very well end up stuck with a Supreme Court decision that will end his open border policy and that will serve as precedent for killing his executive branch refusal to do interior enforcement.” It is difficult to counter his well-reasoned analysis.

Of course, the Court may defer to the administration in an area in which the courts have traditionally granted a large degree of deference: interpretation of the immigration laws. It is questionable whether it will do so, however, given the fact that the justices (as noted) have already refused to stay Judge Kacsmaryk’s injunction.

Alternatively, the Supreme Court may simply sustain that injunction pending a proper wind-down of MPP, starting the process all over again. As I explained back in August, the Court has signaled that this may be the way that it would go, but there has been a lot of litigation in the interim.

In particular, in its December ruling, the Fifth Circuit included a rather thorough analysis of the limits on the executive’s suspension and dispensation authority, that is, its power to not enforce the law. That analysis was not crucial to the circuit court’s ultimate holding, but it did give the justices a lot to chew on.

The Administration and the Supreme Court Are Stuck with the INA as Written. Given its druthers, the current Democratically controlled Congress would simply amend the INA to expand parole and move untold thousands of illegal migrants into the United States illegally, retroactively affirming what the administration is already doing (and not doing).

That would require sign-off from 10 GOP senators, which is highly unlikely. Republicans in Congress view the mess that the Biden administration has created at the border as a winning issue, while even the court-ordered resumption of MPP has turned off many of the president’s “progressive” supporters.

With the 2022 midterms fast approaching, few Republicans likely, therefore, want to save the president from a crisis of his own making.

That all means that Biden — and the Court — are stuck with the INA as it is currently written. Six of the justices on the Court (Chief Justice Roberts and Justices Thomas, Alito, Gorsuch, Kavanaugh, and Barrett) are “textualists”, meaning that they “adhere to the objective meaning of the legal text”. As it relates to the detention mandate and the parole provision, the text of the INA here is clear — and not in Biden’s favor.

Repudiation or Nothingburger. The Court’s ultimate decision, which is expected by the end of its current term in July, could be anything from a thermonuclear repudiation of the Biden administration’s immigration non-enforcement regime to a legalistic nothingburger.

The Biden administration took a big risk in asking the Supreme Court to review the circuit court’s decision in Texas. We will soon find out whether that risk pays off for the president, or instead leads to a reset of Congress’s authority to determine which aliens are allowed into the United States, and on what terms.