SCOTUS: Biden Must Continue to Implement ‘Remain in Mexico’ ‘In Good Faith’

The administration made the mess at the border, and must clean it up 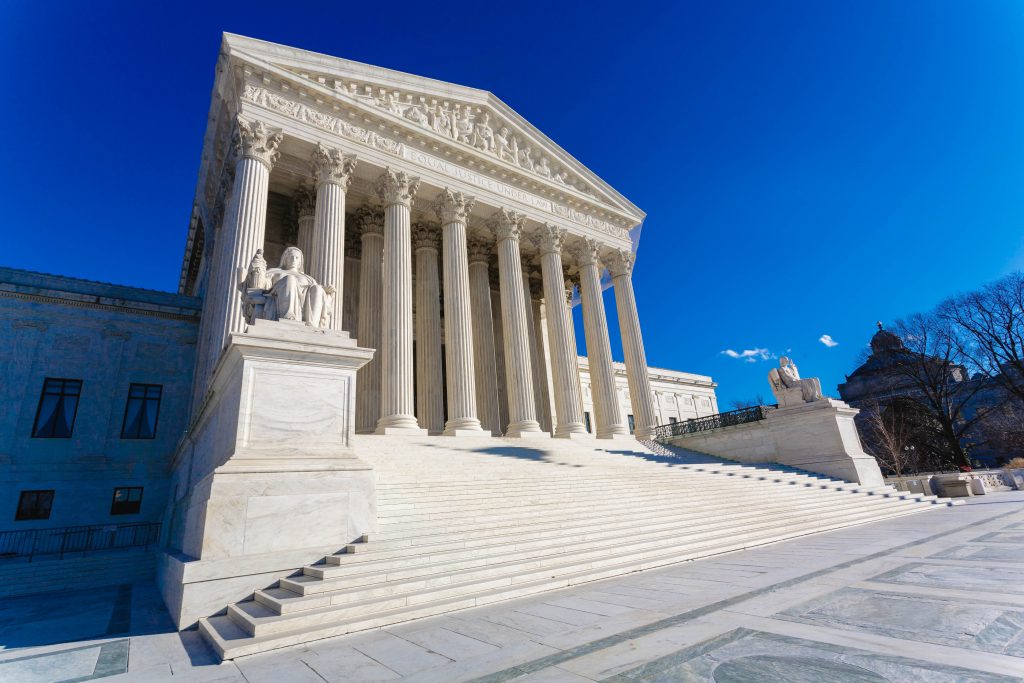 Late on Tuesday, the Supreme Court denied an application for a stay filed by the Biden administration of a lower court order that had blocked DHS’s June 1 termination of the Trump-era Migrant Protection Protocols — “MPP”, better known as “Remain in Mexico”. There is both more and less to the High Court’s order than meets the eye.

In that case, as I explained on August 23 and August 17, the states of Texas and Missouri had sued in the U.S. District Court for the Northern District of Texas to prevent the administration from terminating MPP. Although the states argued that the termination of MPP increased the costs to each (including incarceration costs) and put a strain on their public services, DHS terminated MPP anyway.

After considering the matter, Judge Matthew Kacsmaryk enjoined the Biden administration’s MPP termination, finding it was “arbitrary and capricious” in violation of the Administrative Procedure Act (APA), and also that terminating MPP caused DHS to “systemically violate” the mandatory detention provisions in section 235 of the Immigration and Nationality Act (INA).

The APA is not a substantive statute, per se, but rather one that “prescribes procedures for agency rulemakings and adjudications, as well as standards for judicial review of final agency actions”.

It provides an avenue for litigants adversely affected by administrative decisions to challenge agency decision-making that is either poorly thought-out or explained (that is, “arbitrary and capricious”) or done without authority or in violation of statute.

As the Congressional Research Service has explained: “Fundamentally, the arbitrary and capricious standard requires only that an agency demonstrate that it engaged in reasoned decision-making by providing an adequate explanation for its decision.” In fifth-grade math terms, agencies can’t just offer their conclusions; they also must show their work.

With respect to the APA violation, Judge Kacsmaryk found that DHS failed to consider the benefits of MPP (which were never mentioned in its June 1 memo terminating MPP), nor did it consider the reliance interests that states like Texas had in the continued implementation of MPP, and the costs that they would incur if MPP ended and large numbers of illegal migrants were thereafter released into the United States (plural).

States set their budgets years in advance and cannot quickly come up with additional funding to provide emergency medical care and public services to new migrants, educate new younger migrants, and pay additional correctional costs when some break the law. And there is no way for states to recoup those costs from the federal government after the fact.

DHS also acted arbitrarily and capriciously in failing to consider — or even address — prior findings that the department had made concerning the effectiveness of MPP when it terminated it.

In its October 2019 assessment of the program, DHS explained: “MPP has been an indispensable tool in addressing the ongoing crisis at the southern border and restoring integrity to the immigration system.” Illegal apprehensions plummeted after the program took effect, the department then noted, and asylum claims were adjudicated more quickly than they had been before MPP was implemented.

In that vein, DHS also concluded in October 2019 that thanks to MPP, “aliens without meritorious claims — which no longer constitute a free ticket into the United States — are beginning to voluntarily return home.”

In addition, in his June 1 memorandum terminating MPP, DHS Secretary Alejandro Mayorkas failed to consider any alternatives to simply ending the program wholesale.

Rather, he simply stated: “I also considered whether the program could be modified in some fashion, but I believe that addressing the deficiencies identified in my review would require a total redesign that would involve significant additional investments in personnel and resources.”

Stating that you “believe” something is not the same as explaining why it’s true, let alone an account of what the alternatives were and why the costs don’t justify the benefits of each.

The “systemic violation” part of the judge’s order goes to a point that I have made often: Under section 235 of the Immigration and Nationality Act (INA), illegal migrants are supposed to be detained until their cases can be resolved.

In lieu of detention, though, DHS can release arriving aliens under a limited authority known as “parole” or on bond, or it can send them back across the border to await their removal hearings. But it can’t release them en masse simply because it cannot hold them all.

After finding DHS acted arbitrarily and capriciously in terminating MPP, and that termination of MPP caused DHS to “systemically violate” the mandatory detention provisions in section 235 of the INA, Judge Kacsmaryk “permanently enjoined and restrained” DHS “from implementing or enforcing the June 1 Memorandum” terminating MPP and ordered it “to enforce and implement MPP in good faith”.

That injunction would remain in effect, he explained, until DHS “lawfully rescinded” MPP “in compliance with the APA and until such a time as the federal government has sufficient detention capacity to detain all aliens subject to mandatory detention under” section 235 of the INA “without releasing any aliens because of a lack of detention resources.” (Emphasis in original.)

The Biden DOJ sought a stay of that injunction pending appeal from the Fifth Circuit. On August 19, a three-judge circuit-court panel issued a per curiam decision (unsigned but issued for the full panel) that denied that request for a stay.

On August 20, Biden’s DOJ next filed an application for a stay of Judge Kacsmaryk’s order with the Supreme Court, pending full appeal of his decision to the Fifth Circuit. That day, Justice Alito granted a temporary stay of that injunction, teeing up the Supreme Court’s August 24 order.

The terms of that order are very important. Specifically, the Court held only that the government had failed to show that it was likely to succeed on its claim that DHS’s June 1 termination of MPP “was not arbitrary and capricious”.

That means that the six justices who denied the Biden administration’s request for a stay (Justices Breyer, Kagan, and Sotomayor would have granted it) either disagreed with, or opted not to rule on now, whether the lower court’s finding that termination of MPP would cause DHS to “systemically violate” the mandatory detention provisions in section 235 of the INA is correct or not.

That said, however, the justices made clear that their order “should not be read as affecting the construction of” the injunction by the circuit court. That means that the Court did not prevent the circuit court from finding on its further review that termination of MPP would result in a systemic violation of section 235 of the INA.

That’s important because in considering the government’s appeal of Judge Kacsmaryk’s decision, the circuit court can either terminate his injunction, modify it, or allow it to stand as is.

If the circuit court were to terminate Judge Kacsmaryk’s injunction, then MPP itself would be terminated. That would likely require them to determine that the June 1 DHS memo did not violate the APA and that termination of MPP would not result in a systemic violation of section 235 of the INA. It would also likely send the states back to the Supreme Court.

Were the circuit court to find only that the June 1 DHS memo violated the APA, without concluding that the ultimate termination of MPP would force DHS to violate section 235 of the INA, the portion of Judge Kacsmaryk’s injunction that blocked the termination of MPP until “it has been lawfully rescinded in compliance with the APA” would remain in place.

That would leave DHS free to go back and “redo” its attempt to end MPP, and Mayorkas likely would not make the mistake of basing his conclusions on any of his “beliefs” without showing that they were grounded in empirical fact.

Finally, however, if the circuit court finds that the June 1 termination memo both violated the APA and that termination of MPP would result in a systemic violation of the INA, Judge Kacsmaryk’s full injunction would stand. Again, he ordered the Biden administration:

to enforce and implement MPP in good faith until such a time as it has been lawfully rescinded in compliance with the APA and until such a time as the federal government has sufficient detention capacity to detain all aliens subject to mandatory detention under [section 235 of the INA] without releasing any aliens because of a lack of detention resources. [Emphases in original.]

That is the court’s order as it stands now, and is actually more significant than simply whether DHS has to return illegal migrants back across the border or not. That’s because the Biden administration would not be able to prevent immigration officers from sending illegal migrants to Mexico to await their hearings until it has the resources to detain them (again, as the law requires), and/or to grant each one of them parole or bond.

That would be a change from how things were being done at the border before Judge Kacsmaryk issued his order. As I have previously explained, the Biden administration has released tens of thousands of aliens on “Notices to Report”, which don’t exist under the INA and have no legal effect.

Aliens who are processed in accordance with law, on the other hand, are issued “Notices to Appear” (NTAs) under section 239(a) of the INA that direct them to appear in immigration court at a specific time, date and place. NTAs have real legal effect: If an alien receives one, and fails to show up for court, the alien must be ordered removed.

For aliens to be paroled or granted bond, DHS must actually process them, meaning that they either have to be placed into “expedited removal” under section 235(b)(1) of the INA, or regular removal proceedings in accordance with section 235(b)(2) of the INA. No longer (for now) is the Biden administration simply able to release large numbers of illegal migrants into the United States en masse.

I say “for now” because that is true only as long as Judge Kacsmaryk’s injunction remains in effect. The three-judge panel of the Fifth Circuit that denied the government’s stay request did not seem convinced that the Biden administration could not simply release any aliens it could not detain. It found:

It remains true — with or without MPP — that DHS has discretion to make individualized detention and non-detention decisions in accordance with the strictures of [section 235 of the INA]. What DHS cannot do, the States allege, is rescind the MPP program in a way that is arbitrary, capricious, and contrary to law. DHS cites nothing to suggest that latter decision is committed to agency discretion.

That said, 12 of the 17 were appointed by Republicans (six by Donald Trump), as were seven of the nine senior judges on the court (who hear a partial docket). That does not mean that Texas and Missouri are sure to prevail on any or all of their claims, but it means that they will not be starting in a hole. They certainly have a robust record and some good decisions to start with.

Of course, none of this would matter if Biden had not ditched nearly every policy his predecessor had implemented (like MPP) that had allowed DHS to control illegal immigration at the border to begin with. States like Texas are incurring fiscal and public-safety harms due to the resultant illegal migration surge, which is why they have the ability to sue the administration for what it is not doing now.