Officers 'now being told to enforce nothing' 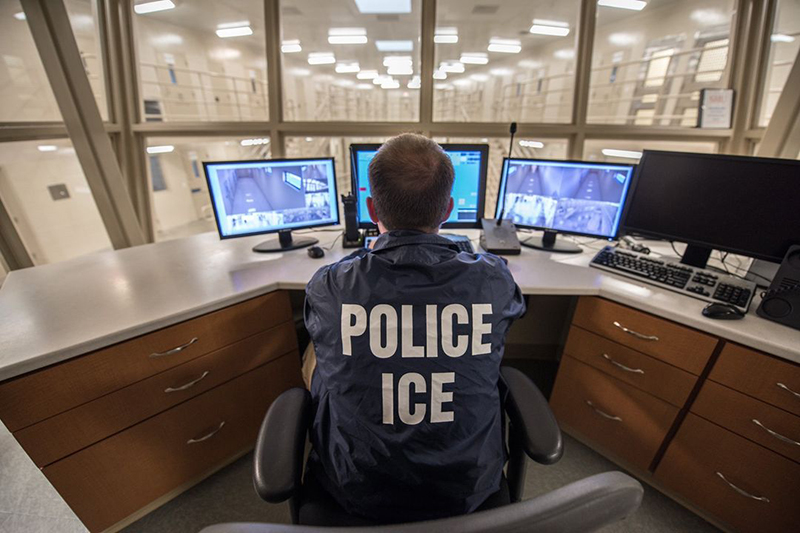 The Washington Post ran an article this week captioned "New Biden rules for ICE point to fewer arrests and deportations, and a more restrained agency". That is one way of putting it. I prefer the following quote in the article, from one unnamed "distraught official": "They've abolished ICE without abolishing ICE."

I have already reported on the DHS memorandum of January 20 limiting ICE arrests to three specified "priorities": spies and terrorists; aliens who entered illegally on or after November 1; and aliens released from incarceration on or after the date of that memorandum who have been convicted of "aggravated felonies", as defined in section 101(a)(43) of the Immigration and Nationality Act (INA).

As a fig leaf, that memorandum notes that "nothing in this memorandum prohibits the apprehension or detention of individuals unlawfully in the United States who are not identified as priorities herein." Note, however, aliens lawfully admitted who are removable, for say, sexual abuse of a minor (an aggravated felony) are not "unlawfully in the United States" until they have been ordered removed.

So, if said child molester was released from federal, state, or local custody prior to Inauguration Day, 2020, he or she is not to be arrested by ICE under the limitations in that memorandum. This is not a matter of semantics or legalese: Agents and officers know the law as well as I do, and will certainly interpret this sentence in the memorandum as I have. (See my colleague Jessica Vaughan's analysis applying the new priorities to 2018 interior removal statistics; she found that 96.5 percent of those removed would have been allowed to stay.)

The memorandum continues: "In order to ensure appropriate allocation of resources and exercise of prosecutorial discretion, the Acting Director of ICE shall issue operational guidance on the implementation of these priorities." Which brings me to the Post story.

It reports that ICE is preparing such guidelines "as the Biden administration attempts to assert more control over an agency afforded wide latitude under President Donald Trump." That is in the first line of the article, but bears more analysis.

It is not as if ICE officials had untrammeled authority to grab whomever they wanted off of the street under Trump. They could only arrest aliens whom they had concluded were removable under the INA — the law that Congress enacted and the president signed. Put another way, ICE could only arrest, detain, and remove aliens your elected representatives said that they could arrest, detain, and remove.

That is actually an overstatement, as Trump issued an executive order with his own ICE enforcement priorities, but if officers happened upon other removable aliens, they could be arrested, as well.

And, as I explained in a January 26 statistics-filled post captioned "The Canard of 'Hyper' ICE Enforcement Under Trump", ICE actually was more restrained under the 45th president than they were for the majority of President Obama's time in office. Here are two key takeaways:

Those are actual statistics, not feelings, thoughts, or impressions. With due respect to DC's paper of record, if ICE had "wide latitude" under Trump, it is only when compared to the last years of the Obama administration, and they used it judiciously.

The Post reports that according to "interim instructions sent to senior officials", ICE "will no longer seek to deport immigrants for crimes such as driving under the influence and assault". In an October 2019 post, I asked the question "Are Immigration Advocates Pro-Drunk Driver?", and it appears to be an evergreen one.

Of course, as I reported last March, then-candidate Biden threatened to fire ICE officials who arrested and removed any alien who had not been convicted of a felony (more on that below), and that he did not consider "drunk driving as a felony". That was a campaign promise. The new guidelines are where the metaphorical rubber — and the literal drunk driver—meet the road.

Why focus on them? Because they are dangers to others and themselves, and are likely to do it again.

The National Highway Traffic Safety Administration reports that "[e]very day, almost 30 people in the United States die in drunk-driving crashes — that's one person every 50 minutes" — a total of 10,511 needless deaths in 2018. Mothers Against Drunk Drivers (MADD) reports that the average drunk driver has driven drunk 80 times before their first arrest, and that one-third of all of those arrested for drunk driving are repeat offenders. "Follow the science."

Under the new Biden priorities, ICE agents and officers will have to get HQ clearance before arresting any criminal alien after they have been released from custody. Note that many sanctuary jurisdictions will not give ICE the heads-up that an alien will be released, and may not allow agents and officers into their facilities. How will officers in those jurisdictions arrest even the remaining criminal aliens?

Needless to say, getting approval from Washington will be a time-consuming and often frustrating process, and it will be the rare case as a practical matter in which an alien makes the cut.

Further, as former ICE Director Ron Vitiello explained: "Clearing enforcement actions in Washington, D.C., sets a tone that Agents do not have the trust and confidence of their leadership at ICE HQ or DHS and possibly higher in the chain of command." With due respect to Chief Vitiello, it is not a tone — it is a symphony.

That said, and as the foregoing demonstrates, not even every criminal alien will be treated equally. The new policy memorandum is apparently focused on alien criminals who are "public safety threats", but its definition of that term and yours might be very different.

According to the Post, ICE will not be looking for many aliens convicted of simple assault (as noted above), "money laundering, property crimes, fraud, tax crimes, [or] solicitation", nor will it go after aliens who have been charged but not convicted as a general rule, either.

Simple assault may or may not be a ground of removal and an aggravated felony (depending on how it is defined under the applicable statute and the sentence), but offenders pose a danger to the community, and there is no reason to suffer the continued presence of an otherwise removable alien who has been convicted of the crime. In 2015, the rate of simple assault in the United States was 11.8 per thousand, meaning that the odds are good that you or someone you know have been or will be a victim.

Money laundering is an aggravated felony if the funds exceeded $10,000. More importantly, however, it is a "secondary offense", as it, in the words of the Congressional Research Service (CRS), "is commonly understood as the process of cleansing the taint from the proceeds of crime." Simply put, you don't "launder" money unless it was dirty when you got it.

"Property crimes" may be aggravated felonies, as well. Here is what the National Institute of Justice (NIJ) at DOJ has to say about such offenses: "In a property crime, a victim's property is stolen or destroyed, without the use or threat of force against the victim. Property crimes include burglary and theft as well as vandalism and arson." If you steal my stuff, or burglarize my home, you're a threat.

NIJ explains it "supports projects that strive to understand and reduce the occurrence and impact of property crimes." One sure way to reduce the impact of property crimes is to remove aliens who have committed them from the United States, because that dissuades potential offenders and takes future recidivists from the community. There's no indication that it was consulted by DHS leadership, however.

Fraud? Again, an aggravated felony if the loss is $10,000 or more (and a removable crime involving moral turpitude). AARP (whose constituency is uniquely susceptible to scams) explains that: "Overall fraud losses were more than $1.9 billion last year, up from more than $1.48 billion in 2018, for a 28 percent jump." Why would the Biden administration de-emphasize the removal of aliens for a crime that is getting worse, and costing Americans more?

Tax crimes need no explanation. Tax evasion, again, is an aggravated felony where the revenue lost to the government is $10,000. I pay my taxes, and so should you. Justice Holmes explained that "[t]axes are what we pay for civilized society." He was echoing James Madison, who stated: "The power of taxing people and their property is essential to the very existence of government."

Pro-amnesty group America's Voice asserts: "Immigrants, including those without documentation, pay billions of dollars in taxes to federal, state and local governments every year." If so, what is the problem with removing the few bad apples who don't?

Even for the few remaining criminal aliens left after these exceptions, ICE had better act quickly. As per the Post: "In instances where the aggravated felony is more than 10 years old and not the reason for a recent arrest, that individual would not be considered a public safety threat" who would be amenable to ICE apprehension under the Biden rules.

Consider that for a moment. An alien convicted of murder (an aggravated felony), who came to ICE's attention 10 years and one day after that conviction as a result of an arrest for, say, DUI, would not be subject to arrest and removal, despite the fact that section 237(a)(1) of the INA states: "Any alien (including an alien crewman) in and admitted to the United States shall, upon the order of the Attorney General, be removed if the alien" has been convicted of an aggravated felony. (Emphasis added.)

It was a similar "shall" that prompted Judge Drew B. Tipton of the U.S. District Court for the Southern District of Texas to issue a temporary restraining order blocking implementation of a 100-day "pause" on most removals in the referenced January 20 DHS memorandum (as I explained on January 27).

Congress did not intend to give ICE latitude in deciding whether or not to remove criminal aliens, and this policy will likely give Texas (the plaintiff in that case) plenty of opportunities for legal challenges.

Even gang affiliates will be cut a break under the policy, according to the Post. Only aliens with "well-documented gang affiliations" will be considered public safety threats, not those who only have: "gang tattoos or records showing 'loose affiliation with gang activity'" (whatever the latter means).

Two points: First, does anybody believe that ICE was deporting too many gang members?

Second, I am fairly familiar with how gangs operate. MS-13 does not issue membership cards, and transnational criminal organizations are dependent upon confederates and affiliates to help them carry out their criminal activities.

Case in point: In the May 29 killing of 16-year-old Gabriela Alejandra Gonzalez Ardon in a rural area in northern Baltimore County, Md. (a case about which I have written extensively), the county police have charged five individuals who it believes to be "affiliated with the MS-13 gang". Would those five have otherwise made the Biden-DHS cutoff if ICE had arrested them before that murder? I don't know, but probably not.

The aforementioned "distraught official" was quoted by the Post as stating: "It literally feels like we've gone from the ability to fully enforce our immigration laws to now being told to enforce nothing." That's my take, too.