The Canard of 'Hyper' ICE Enforcement Under Trump 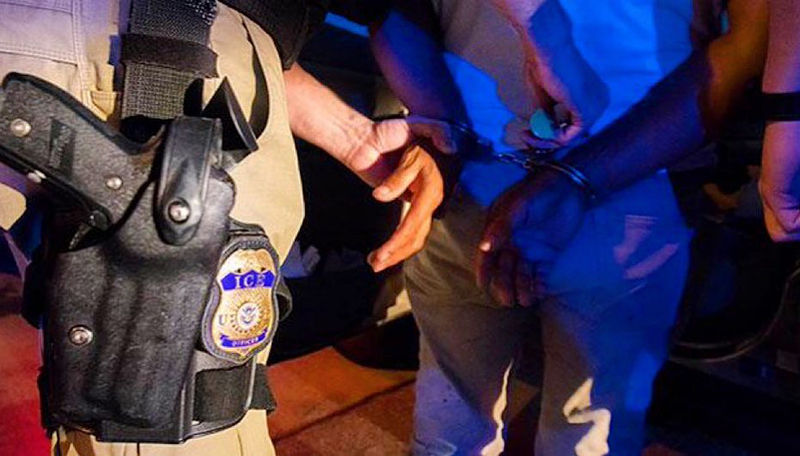 In my last post, "Trump's DHS Inked Immigration Enforcement Agreements with States", I discussed a January 15 article from the website BuzzFeed News that revealed that DHS under the Trump administration had signed agreements with handful of jurisdictions on immigration enforcement. I omitted my discussion of the subhead in that article, which (in my opinion) is erroneous, but nonetheless driving the current immigration debate.

It asserts that those agreements are "just another last-ditch effort to try and ingrain a reckless hyper enforcement system", according to "one legal expert". That begs the questions of whether ICE enforcement under Trump was either "reckless" or "hyper".

There is no reason to believe that ICE enforcement was "reckless". By law (which a "legal expert" would logically apply), behavior is "reckless" if it "is so careless that it is considered an extreme departure from the care a reasonable person would exercise in similar circumstances".

Enforcing the immigration laws is one of ICE's jobs, and its officers seemed to do it in the same manner under Trump as they did in preceding administrations, with only limited success due to widespread sanctuary policies and significant anti-enforcement litigation.

Which goes to the issue whether that enforcement was "hyper". That word is defined as "extremely active", and comes from the Greek for "over".

As I recently explained, however, using the two main metrics to assess ICE enforcement (arrests in and removals from the interior of the United States), ICE was significantly less active in enforcing the immigration laws under Trump than it was under most of President Obama's two terms.

Why is there such disconnect between popular impressions and actual facts? I don't know. Trump's own rhetoric might have a lot to do with it, or perhaps immigration advocates want less enforcement, period. Arrests and removals did fall in the last two full fiscal years of the Obama administration, but that was because DHS had placed onerous restrictions on arrests, apprehensions, detention, and removal of aliens in November 2014.

Those restrictions led to ICE enforcement best understood as "hypo" (from the Greek for "under", although in English it is generally a prefix), but actually reckless, because they allowed criminals to remain in the United States to reoffend, and almost definitely encouraged more illegal migration.

Nonetheless, that erroneous impression appears to be driving many Biden enforcement policies, including DHS's 100-day moratorium on most removals, which my colleague Jessica Vaughan discussed in a January 22 post captioned "Biden Freezes ICE; Suspends 85% of Criminal Alien Deportations".

The memorandum announcing that 100-day "pause" set out three "priorities" for immigration enforcement generally: national security threats, aliens who crossed the border illegally on or after November 1, 2020, and aliens convicted of an "aggravated felony" who are "are determined to pose a threat to public safety".

Respectfully, in defining certain offenses as "aggravated felonies" in section 101(a)(43) of the Immigration and Nationality Act (INA), Congress has already decided that aliens convicted of such offenses pose a risk to public safety.

Nor do those restrictions simply apply to the removal of aliens who fall within those priorities, as Vaughan noted.

Rather, they apply to "decision[s] to issue, serve, file, or cancel a Notice to Appear" (the charging document in removal proceedings), as well as "to a broad range of other discretionary enforcement decisions, including" immigration stops and arrests, detentions and releases, and the termination of removal proceedings against facially removable aliens.

That effectively means that there will be little or no immigration enforcement, or even removal proceedings, involving a broad swath of — as noted — facially removable aliens for the foreseeable future. It also means that ICE's resources (in particular) will largely be consumed by not enforcing the laws codified by Congress in the INA.

Why? The memorandum notes that DHS's resources are "limited", which is undoubtedly correct. In lieu of attempting to use the resources that Congress has given the department when it comes to enforcing the immigration laws, however, it states that "DHS must implement civil immigration enforcement based on sensible priorities and changing circumstances."

"Sensible priorities" is a subjective term, and the "changing circumstances" are largely undefined (except for references to the pandemic).

Which again begs the question of whether ICE's priorities under Trump were not "sensible". In a January 15 post, "Misperceptions About ICE Enforcement Under Trump Warp Biden's Immigration Promises: It was actually less harsh under Trump than during all but two years of Obama", I explained that they were plenty sensible, and in fact were rather weak compared to prior administrations.

As I reported there, of the 95,360 aliens removed by ICE from the interior of the United States in FY 2018 (as noted, the high-water mark of ICE enforcement under Trump), 76.1 percent of them had criminal convictions and 14.8 percent had pending criminal charges (a combined 90.9 percent).

In FY 2019, removals from the United States in the interior fell, and of the 85,958 aliens ICE removed who were not initially apprehended at the border, 75.6 percent of them had criminal convictions, and 15.7 percent had pending criminal charges — a total of 91.3 percent.

That said, the number of aliens removed in FY 2020 actually plummeted compared to the two years before.

Last fiscal year (FY 2020), ICE only removed 62,739 aliens from the interior — 92 percent of whom had pending criminal charges or convictions, with convicted aliens making up the bulk (77 percent). That is actually fewer interior removals than in the last full fiscal year of the Obama administration (65,332), 92 percent of whom had criminal convictions.

That FY 2020 number reflected a decline in immigration enforcement due to the pandemic (again, "changing circumstances"), but is nonetheless notable for the low number of aliens Trump's ICE actually removed.

I have heard arguments that actually recognize the ineffectiveness of ICE enforcement under Trump, but advance it as a reason for implementing the amnesty that the Biden administration has proposed. Specifically, the contention is made that Trump plainly wanted to enforce the immigration laws, but could not do so in any meaningful manner, meaning that immigration enforcement is not possible.

Again, however, those arguments ignore the fact that ICE enforcement has been hobbled by sanctuary policies that limit — if not eliminate — cooperation between state and local authorities and ICE.

ICE detainers have been ignored, with criminal aliens being released to the streets to offend again. Information about aliens in state and local custody has not been shared, despite federal laws that prohibit restrictions on information sharing. ICE officers have been barred from jails and prisons where criminal aliens can be arrested safely, without danger to those officers, the aliens, or the public.

If you are wondering why there has been significant discussion about ICE arrests at courthouses of late, it is because they are one of the few places in many jurisdictions where such criminals can be arrested safely.

Krikorian recommends mandating E-Verify to ensure that all those who are employed in the United States are authorized to do so, a "a functioning entry-exit tracking system" to prevent aliens from entering the United States on nonimmigrant visas and then remaining to live and work indefinitely in the United States be implemented, and that "full cooperation between federal immigration authorities and local law enforcement — i.e., an end to sanctuary cities" be the rule before amnesty is considered.

He is correct. Absent these "sensible policies", there is simply going to be the anemic enforcement of the immigration laws that was the hallmark of the Trump administration, or worse. Again, not for want of trying, but due to a lack of assistance from the agency's state and local law-enforcement partners.