Dysfunction on the Border

The Center for Immigration Studies recently completed its ninth border tour, exploring El Paso and the surrounding region. These weeklong trips give us glimpses into the culture and history of the borderlands while providing an understanding of current immigration trends. A recurring theme of this year’s trip — which included visits with local residents, lectures from experts, a tour of Ciudad Juarez and Anapra, and an excursion to White Sands National Park — was the dysfunction created by the Biden administration’s border policies. 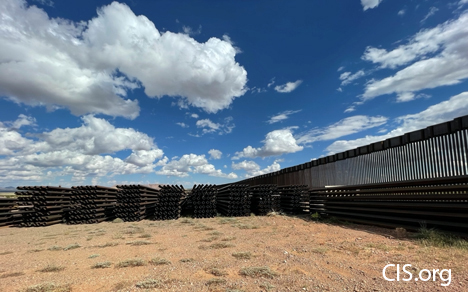 About 80 miles west of El Paso sits the small town of Columbus, N.M. The drive on State Road 9 through the desolate and stunning Chihuahuan Desert runs along the border. Bollard fencing can be seen on much of the route. Since January, large stockpiles of raw materials intended to extend the fence lie abandoned. These stockpiles, each worth millions of dollars but cumbersome and costly to move, can be found at various points along the entire southwest border, from Imperial Beach to Brownsville. Their presence represents the abrupt turnaround in border policy by the Biden administration. The profligacy and disorder is a monument to the polarization and discontinuity of our national politics.

West of Columbus there's a gap in the fence of less than a mile. There, welders put down their torches and walked off the job when they got news of the executive proclamation that stopped construction. They continued to get paid not to build the wall. Some of the bollards that had already been erected were left hollow, never filled with the concrete designed to keep them in place. Electricity for gates in the wall was turned off. Areas where Normandy barriers had been cleared in preparation for more secure fencing were left bare.

The farmers and ranchers who live in this rugged and remote area now contend with an increasing flow of migrants and drugs headed north, funneled through that gap. One rancher we visited told us he always carries his sidearm now, something that did not feel necessary in the past. The cartels, he says, are very active along this wide-open and dangerous part of the border. 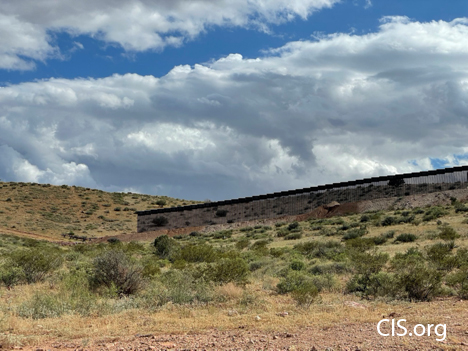 The gap in bollard fencing west of Columbus, N.M. Photo by John Wahala for CIS.

Rep. Yvette Herrell (R) agrees. In a meeting with her and her staff, we were told that the 2nd congressional district of New Mexico acts as a funnel for illegal crossings and that the flow is growing in intensity and ferocity. Her district gets twice the amount of traffic as El Paso. Unlike asylum seekers who seek out authorities, many of the crossers are drug runners who are trying to evade detection.

By reversing a series of enforcement initiatives, the Biden administration has supercharged this flow, undoing the work of career policy staff for no substantive reason while creating an unstable environment that did not accompany previous changes in leadership. In our meeting with Herrell and her staff, it was suggested that more people will cross this part of the border in the coming years than live in the entire state of New Mexico.

In the last fiscal year, Customs and Border Protection reported a record 1,734,686 encounters with migrants along the southwest border. Traffic was up dramatically in every sector. The Rio Grande Valley in Texas, to the southeast of New Mexico, saw the most illegal crossings. Encounters there were up more than 500 percent. To the west, in Yuma, Ariz., encounters were up more than 1,200 percent. The El Paso sector, which includes New Mexico, saw a 256 percent increase.

These record-breaking numbers do not capture the entire scope of the influx because a very large number of aliens cross without coming in contact with agents. It was reported last April that nearly 1,000 migrants a day were successfully sneaking into the country. In some places along the border, the number of “got-aways” may be quite high. Whatever the actual figures are, an extraordinary number of people from all over the world illegally crossed our southern border during the last 12 months. 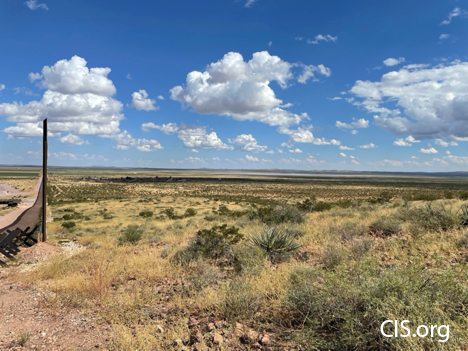 Another view of the gap in the bollard fencing west of Columbus, N.M., showing mostly the Mexican side of the border. Photo by John Wahala for CIS.

Another thing these numbers show is the extraordinary effort still being made by the Border Patrol to secure the border. Of the 1,734,686 reported encounters over the past year, agents made a record 1,659,206 apprehensions. An operation of that scale requires thousands of dedicated and skilled officers backed by a significant infrastructure of staff and technology. The border fence is just one aspect of a successful deterrence strategy. Despite the political decisions now being made, that infrastructure is still largely in place thanks to investments made by previous congresses and administrations.

As part of this ongoing effort, experts in the field are studying ways to better secure the border. One such person is Victor Manjarrez, former Border Patrol chief of both the Tucson and El Paso sectors who is now a professor at the University of Texas, El Paso. Manjarrez described the border to us as an ecosystem, with layers of complexity and actors who respond to stimuli in various ways. To understand how cartels move people and drugs and weapons into the United States, he developed the theory of “chaos and clutter”.

Manjarrez’s theory helps to better understand events on the border. The thousands of Haitians that were recently pushed through to Del Rio, Texas, for example, were in part a feint by the cartels to get contraband across elsewhere. He is thinking deeply about these issues and his work can be used to devise policies that more effectively counter the enormous resources and increasing sophistication of international smuggling organizations.

The main problem, however, is not a shortage of dedicated agents or a dearth of expertise. It is a lack of political will to implement effective policies. This has been a longstanding problem in Washington, as factions on both the left and right joined forces to thwart enforcement decades ago. But the wholesale disregard for federal immigration law by those currently in charge of administering federal immigration law is something new.

My colleagues have chronicled this crisis since January. It is not necessary to reiterate all of the ways that the Biden administration has damaged border security here. One statistic, however, that Andrew Arthur recently pointed out is instructive: More than half a million aliens that were apprehended and processed under the regular removal process this year have been released into the interior of the United States, in violation of existing law. This administration is undermining the efforts of its own Border Patrol.

Whether these decisions are being driven by an ideological aversion to borders or are simply a reflexive undoing of the policies enacted by President Trump, they are brazen in their contempt for the law and are causing a cascading series of consequences. As Manjarrez and others have explained, migrants respond to incentives. Not enforcing the law supercharges the flow of illegal traffic, creating a host of problems that even former President Barack Obama recently acknowledged as unsustainable.

A sad irony in the growing border crisis is the suffering it has inflicted on so many. To the adulation of celebrities and the media, Biden vowed to reverse the ostensibly inhumane policies of the Trump administration. In doing so, he has emboldened the criminal element that controls the smuggling routes and preys on migrants.

This was emotionally articulated to us by Dolores, a resident of the Chihuahuita neighborhood in El Paso, whose home runs right up to the border. The fence that was erected a number of years ago and subsequently reinforced towers over the edge of her patio, where she and her husband generously hosted us for lunch. Dolores told us that once that fence went up, she got her freedom. Before it was constructed, bandits and drug traffickers were commonplace. She would routinely discover people on her property, even on her roof, sometimes 20 at a time. That does not happen anymore. She can now live without fear in the home that her family built many generations ago.

Dolores told us that she still sees some of the brutality that accompanies illegal immigration, like women who have been beaten up and prostituted by smugglers and children who have been dropped over the fence. These atrocities, which we hear about on every trip to the border, grow more numerous when illegal immigration intensifies. Dolores then described the efforts that the Border Patrol exerts to save and care for these victims. She told us they are heroes.

During our meeting with Herrell, her staff mentioned all of the crises that are currently besetting Americans. She said that she does not want the border crisis to become white noise. The dysfunction created over the last year has caused a lot of suffering and will have lasting consequences. It must be addressed.