‘Immigration is tough’, but the easy thing for the Biden administration to do is enforce the law 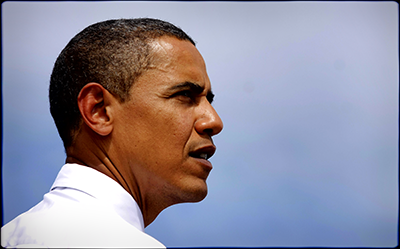 New alarms are being raised from very different sources: former President Barack Obama and Panamanian Foreign Minister Erika Mouynes, about the ongoing humanitarian and national-security disaster at the Southwest border. The Biden administration should heed their advice and admonitions.

During a September 28 interview with ABC’s “Good Morning America”, Obama pushed for “comprehensive immigration reform”, which anyone familiar with the immigration debate should know is shorthand for “amnesty”. That part was not interesting, as the 44th president has been advocating for amnesty for years.

It was interesting, however, when Obama described the situation in “Del Rio” over the past two weeks as “a painful reminder that we don't have this right yet and we've got more work to do." Party loyalty is everything in politics, but in this the former president seemed to be casting a little shade at his former number two.

That shade only deepened, however, as Obama stated:

Immigration is tough. It always has been because, on the one hand, I think we are naturally a people that wants to help others. And we see tragedy and hardship and families that are desperately trying to get here so that their kids are safe, and they're in some cases fleeing violence or catastrophe. ... At the same time, we're a nation state. We have borders. The idea that we can just have open borders is something that ... as a practical matter, is unsustainable.

Whether the Biden administration admits it or not, by ditching policies implemented by his more immediate predecessor that had, successfully, brought “operational control” to the Southwest border without erecting his own “guardrails” on the system to prevent chaos there first (as he had promised to do), the president has created “open borders”, at least on the Mexican side of the United States.

You don’t have to believe me that we now have open borders; just read the excerpt above. Obama seems to be aware of the implications of Biden’s policies, too.

Why would the gentleman from Illinois (by way of Hawaii) be making such statements publicly? Two reasons.

First, whatever you think of Obama’s policies or ideas, he was interested in the wellbeing of the American people. When he was faced with his own border crisis in 2014, he was not slow to act, as I explained in a January post:

The Obama administration responded to that 2014 surge [in unaccompanied alien children (UACs) and migrants in “family units” (FMUs)] by opening [Family Residential Centers] in Karnes City and Dilley, Texas, and Artesia, N.M., to detain FMUs (Artesia was closed shortly thereafter). By FY 2015, the number of UAC apprehensions at the Southwest border had dropped to 39,970, and the number of FMU apprehensions fell to 39,838.

Second, Obama is a Democrat, and likely viewed by many of his fellow partisans as the spiritual leader of the Party of Jackson. The current border debacle is very, very bad for Democrats up for reelection in the 2022 midterm elections. You can listen to my podcast with my colleague Mark Krikorian to learn more, or take a look at my September 29 post on recent polling numbers on immigration.

Obama’s statements are as much a “word to the wise” as they are a critique of Biden’s feckless immigration policies and inept response to the Southwest border disaster. You could summarize the former president’s statements above as “I understand this is hard, Joe, but you’re the boss and you gotta work it out”.

Then, there is Mouynes, the Panamanian foreign minister.

In statements to press outlet Axios published on September 30, she warned that there are a lot more migrants likely working their way north to the United States: 60,000 more Haitian nationals, to be exact, in addition to the 20,000 to 25,000 who have already made it here. Some 27,000 more are expected in Panama, soon, as well.

Those migrants are showing up in Panama malnourished (the children among them, in particular, “are in terrible condition”), which is likely putting a pretty big strain on the isthmus country. Panamanians are “naturally a people that wants to help others”, too, but compassion has its limits.

The foreign minister is begging for a more focused approach on the current migration issue from leaders across the region. She revealed: "We've engaged with every single authority that we can think of, that we can come across, to say, 'Please, let's pay attention to this.’"

Mouynes wants DHS Secretary Alejandro Mayorkas or one of his subordinates to attend a meeting of regional officials, “to show commitment and pressure nations to follow through on migration plans”.

I hope that I am not reading too much into this to conclude that the “commitment” she is looking for is from the United States to enforce its own laws, and to craft a solution to a problem the administration has created. The problem is not so much “Uncle Sam” as it is “Uncle Joe”.

Her country’s neighbors have already been enlisted to help, but apparently some nerves are fraying there, as well.

Panama has started a “quota system” with Costa Rica (to its immediate north) to control the flow of onward migrants there, and Colombia (to its direct south) “is currently holding back 30,000 migrants who want to cross into Panama and has become ‘frustrated’ Panama cannot take more in”.

Mouynes apparently believes (the Axios format doesn’t always lend itself to clarity) that: “Pro-migration messaging from the U.S. and some South American nations has played a role in the uptick in people moving north.” If that is her opinion, it’s mine, too.

Statements by U.S. officials of sympathy for the plight of foreign nationals in their own home countries are often viewed as entreaties (or at least permission) to leave there and come here.

Consider just the following, from Vice President (and sometimes Border Czar) Kamala Harris on September 21, as “Del Rio” was in the midst of its melt-down under a crush of largely Haitian migrants:

[W]e really have to do a lot more to recognize that, as a member of the Western Hemisphere, we’ve got to support some very basic needs that the people of Haiti have to get back up and to do what folks naturally want to do, be them from Haiti or in the countries in Central America. People want to stay home. They don't want to leave home. But they leave when they cannot satisfy their basic needs.

There is not a lot of “we're a nation state” in Harris’s words. Rather, they read more like an advance justification for future illegal migration.

As Barack Obama has explained, “Immigration is tough”. When you’re in charge, sometimes you must do what is tough. Here, though, the “tough” thing for the Biden administration to do is easy: Curb illegal migration by enforcing the law. For the good of the United States, Panama, and all our regional neighbors.