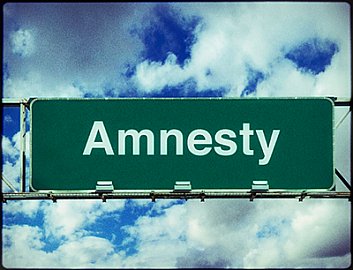 To buttress support for the amnesty that Democrats tried (but apparently failed) to include in the upcoming budget reconciliation bill, the White House Council of Economic Advisers (CEA) on Friday touted the economic benefits of allowing illegal immigrants to become permanent residents.

Let’s first note the narrowness of the discussion. The CEA presents a binary choice between amnesty and continued illegal status, but surely at least some illegal immigrants should be required to return to their home countries. Furthermore, amnesty is not merely an economic issue. It has broad legal, social, and political implications that policymakers must consider as well.

With that out of the way, let’s address the CEA’s argument on its own terms. Would amnesty really provide economic benefits for Americans compared to the status quo? The CEA starts by noting that “some critics claim that legalizing unauthorized immigrants ... could be costly because they would become eligible for additional social insurance benefits such as Medicaid.”

One of those critics is the Congressional Budget Office (CBO). Its unpublished cost estimate for the reconciliation amnesty was $140 billion over the next 10 years. The estimate is consistent with recent CBO scores of amnesty legislation, including a $26 billon cost of a smaller amnesty called the “Dream Act” back in 2017. Had it passed, the Dream Act’s added costs over 10 years would have come primarily from receipt of Obamacare subsidies, refundable tax credits, and Medicaid.

The CEA argues that such costs are overstated. It writes: “Granting permanent legal status would also likely raise tax revenues, increase productivity, and have additional benefits for the children of these immigrants, generating substantial economic value for the country.”

There are, of course, both costs and benefits to amnesty, but the CEA is overplaying the benefits here. Consider taxes. While we can expect that illegal immigrants who had been working “off the books” would start paying their taxes after amnesty, that shift to on-the-books employment would also allow their employers to deduct their wages from business income, offsetting some of the new taxes they would pay.

More fundamentally, around half of illegal immigrants already pay taxes, yet few are eligible for programs such as Medicaid. Therefore, while amnesty recipients will be able to collect 100 percent of the benefits offered by social programs, the additional taxes they pay will amount to 50 percent of what citizens with comparable incomes contribute. That is unlikely to be a good deal for Americans.

As for productivity gains, illegal immigrants do see their wages rise after receiving amnesty, and the recent CBO reports contain no adjustment for this. However, the aforementioned CIS report on Social Security and Medicare found a large net cost despite assuming a 7 percent average wage increase for amnesty recipients. The Heritage Foundation’s 2013 report on the fiscal cost of amnesty also built wage increases into its model, but still came away with trillions of dollars in new spending.

Finally, the CEA argues that the children of illegal immigrants will benefit from having higher-paid parents with more access to social programs. In fact, citizen children who live in households headed by illegal immigrants already have broad access to cash, food, housing, and medical care provided by the American taxpayer: Still, some legal residents may be unaware of or nervous about accepting welfare while living in a household headed by an illegal immigrant. Amnesty could inspire them to even greater levels of participation. The CEA’s suggestion that the added costs would be investments that pay for themselves over time is dubious, as it relies on studies of program participation from as far back as the 1960s. Absolute poverty is much lower today.

Overall, the CEA has dramatically downplayed the costs of amnesty compared to the status quo. In particular, its omission of amnesty’s single largest cost — the effect on the Social Security and Medicare trust funds — suggests that even the CEA knows that such a policy is difficult to defend on fiscal grounds.