While the unemployment rate has improved significantly in recent years, the official unemployment rate includes only those who have looked for a job in the last four weeks. It does not include those of working-age who have dropped out of the labor force entirely — neither working nor looking for work. (Figures do not include those in prison.) The labor force participation rate has not returned to pre-2007 recession levels and, relative to 2000, the rate looks even worse. Things are particularly bad for those without a college education. The problem is not confined to one area of the country; in virtually every state, labor force participation is lower in 2018 than in 2007 or 2000 among the less-educated.

The two primary employment surveys collected by the U. S. government are referred to as the "household survey" (also called the Current Population Survey or CPS) and the "establishment survey" (also called the Current Employment Statistics Survey or CES). The establishment survey asks employers about the number of workers they have. In contrast, the CPS asks people at their place of residence if they are working. Both surveys are collected by the Census Bureau for the Bureau of Labor Statistics (BLS). While the two surveys show the same general trends, the figures from the two surveys differ to some extent.

Because it asks workers about their employment situation, only the CPS provides information about who is working, who is looking for work, and who is neither working nor looking for work. Moreover, only the CPS asks respondents about socio-demographic characteristics such as education, age, and country of birth. Thus, only the CPS can be used to compare employment among immigrants and the native-born. (The establishment survey is not released to the public, so no independent analysis of it is possible.) For these reasons, this analysis uses the public-use files of the CPS to examine employment in the United States by quarter. For each quarter, the three CPS surveys combined include roughly 350,000 natives and 43,000 immigrants. Like all government surveys, the data is weighted to reflect the actual size and demographic makeup of the U.S. population.

The data for the tables in this report comes from the public-use files of the January, February, and March CPSs for 2000 to 2018. Quarterly data is more statistically robust, especially for smaller populations like immigrants and minorities, due to the inclusion of three months of data. Persons in institutions like prisons or nursing homes are not included in the CPS. The CPS is the nation's primary source for unemployment and other labor force statistics.

The government publishes employment statistics that are both seasonally adjusted and unadjusted from the survey. The figures in this analysis are seasonally unadjusted. Unadjusted figures are computationally simpler and easier for other researchers to replicate. In general, the BLS does not provide separate estimates for the foreign-born (immigrants) and the U.S.-born broken down by characteristics like education, race, and age. However, all CPS respondents are asked these questions. The Census Bureau defines the foreign-born as persons who were not U.S. citizens at birth, which includes naturalized citizens, legal immigrants who are not citizens (green card holders), temporary visitors and workers, and illegal immigrants. All figures for the total U.S. population in this report match seasonally unadjusted figures from the BLS.

The Unemployed. The standard measure of unemployment, referred to as U-3, takes the number of people who report that they are not working and have looked for a job in the last four weeks and divides it by the number actually working plus those looking for work. The top halves of Tables 1, 3, and 5 report the number employed and the number unemployed for the first quarter of each year, 2000 to 2018. The left sides of Tables 7, 8, and 9 also report the U-3 unemployment rate in detail for different segments of the population in 2000, 2007, and 2018. We focus on 2007 and 2000 because they represent the peak years of the last two economic expansions.

The Labor Force. The labor force includes all those working or who have looked for work in the four weeks prior to the CPS. The bottom left of Tables 1, 3, and 5 show the number and share of those not in the labor force. When looking at the number and share not in the labor force, it is very common to report statistics only for those under age 65 because the overwhelming majority of those over 65 do not work for reasons not related to economic conditions. The right sides of Tables 7, 8, and 9 report the number working in detail for different segments of the population in the first quarters of 2000, 2007, and 2018. The tables also report the share of people in the labor force, which is the inverse of those not in the labor force, as shown in Tables 1, 3, and 5. The right sides of Tables 7, 8, and 9 also report the employment rate. The employment rate is simply the share of people in each segment of the population who are working. Tables 10 through 13 report labor force participation statistics at the state level for 2000, 2007 and 2018. 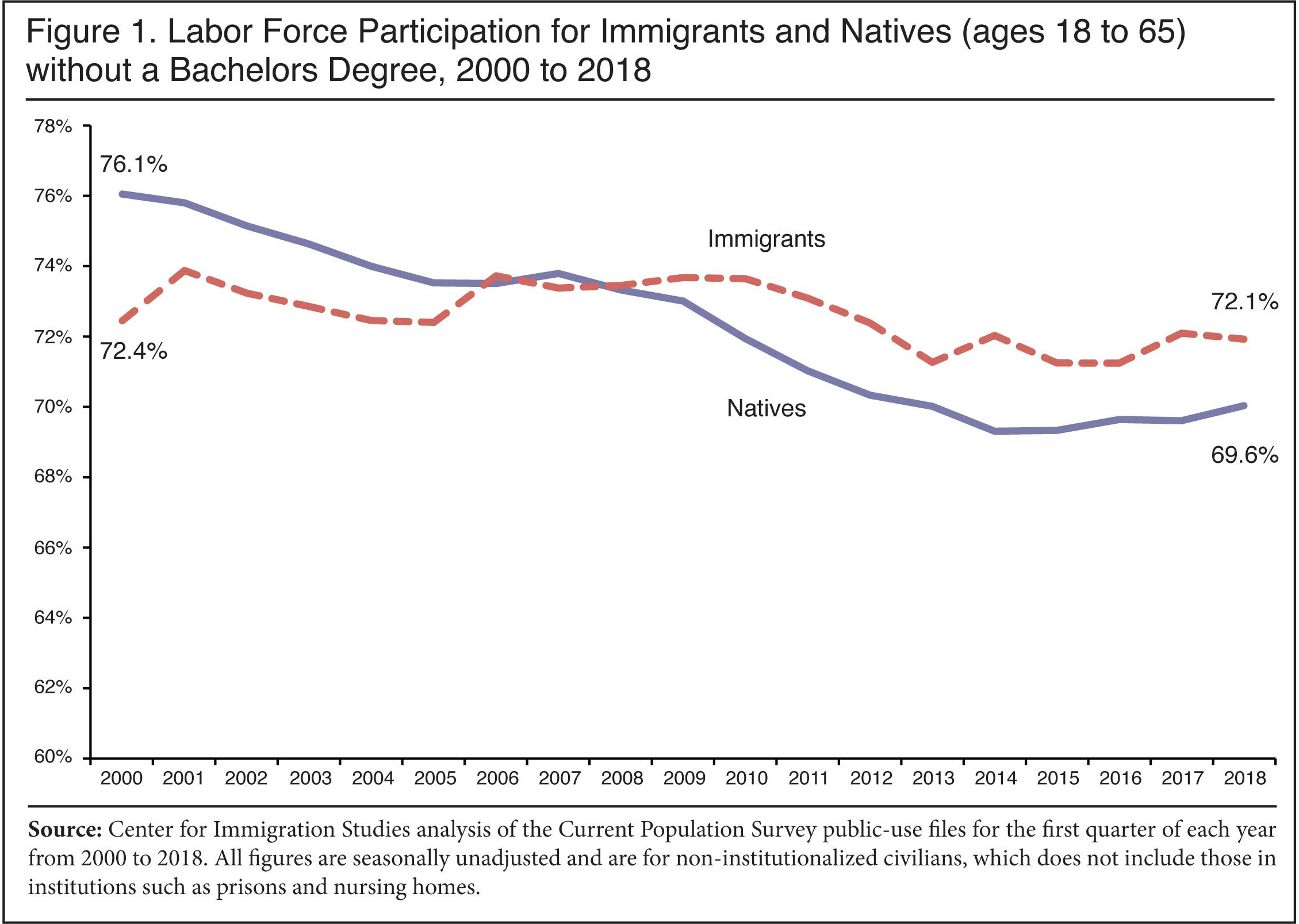 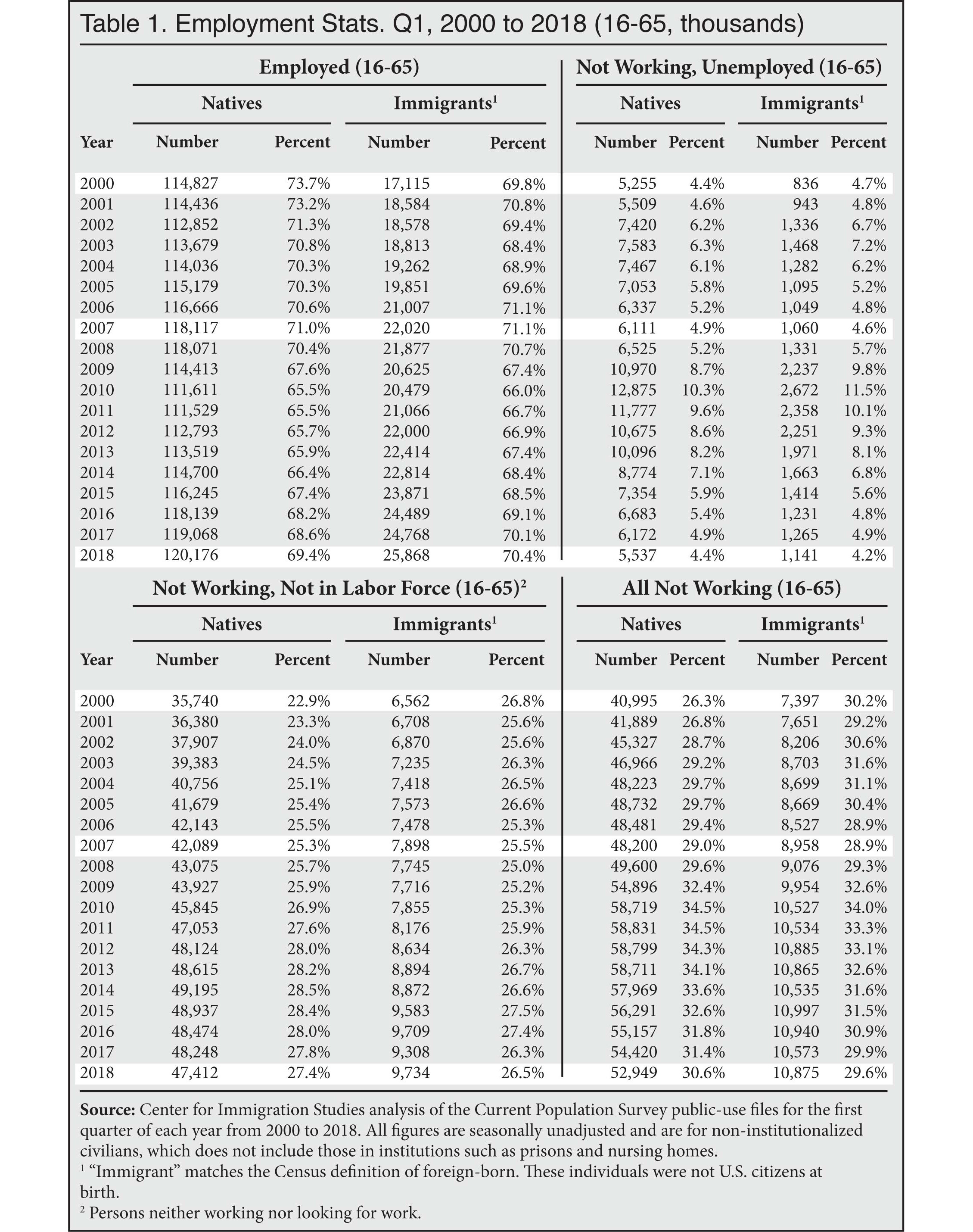 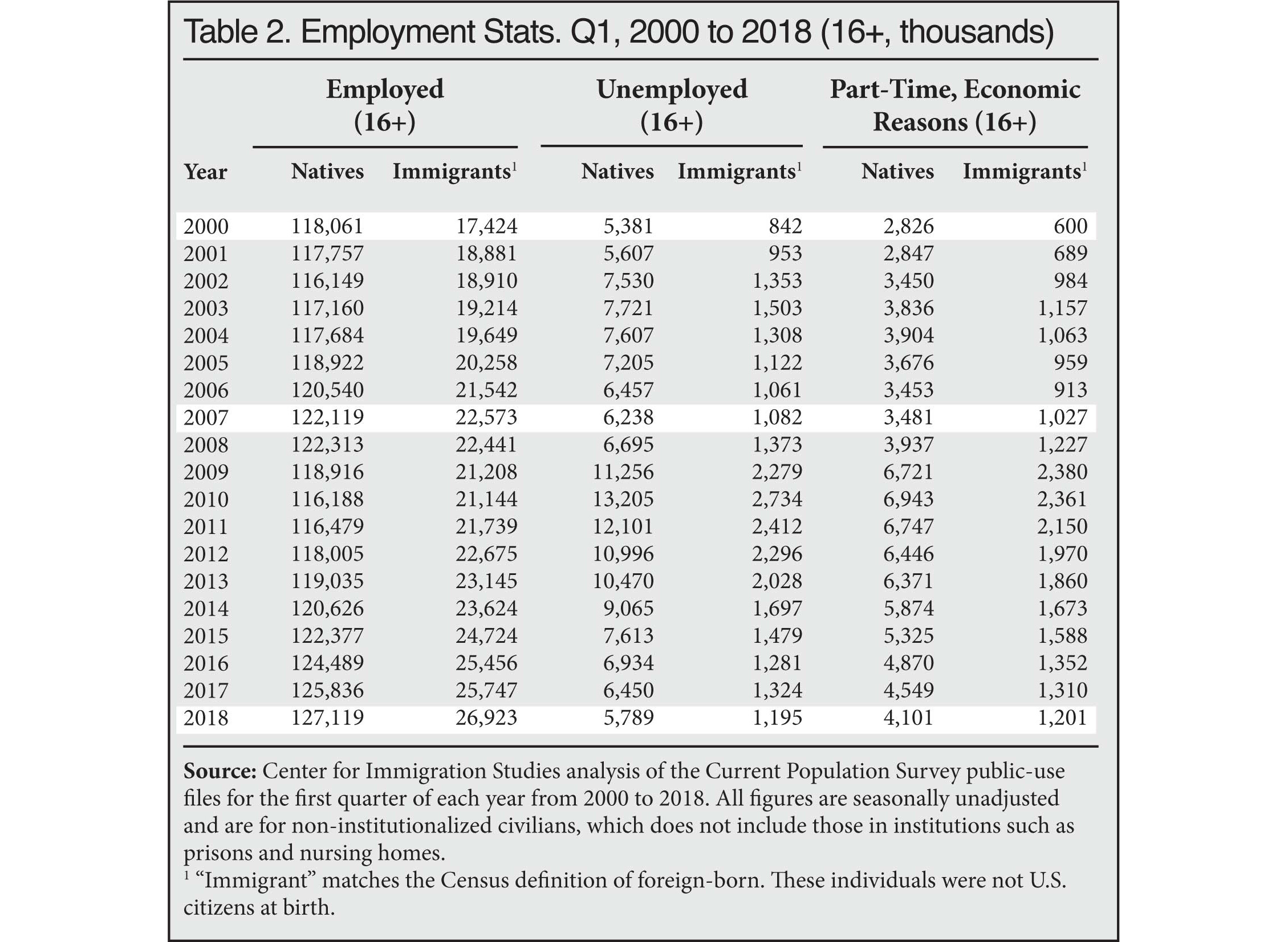 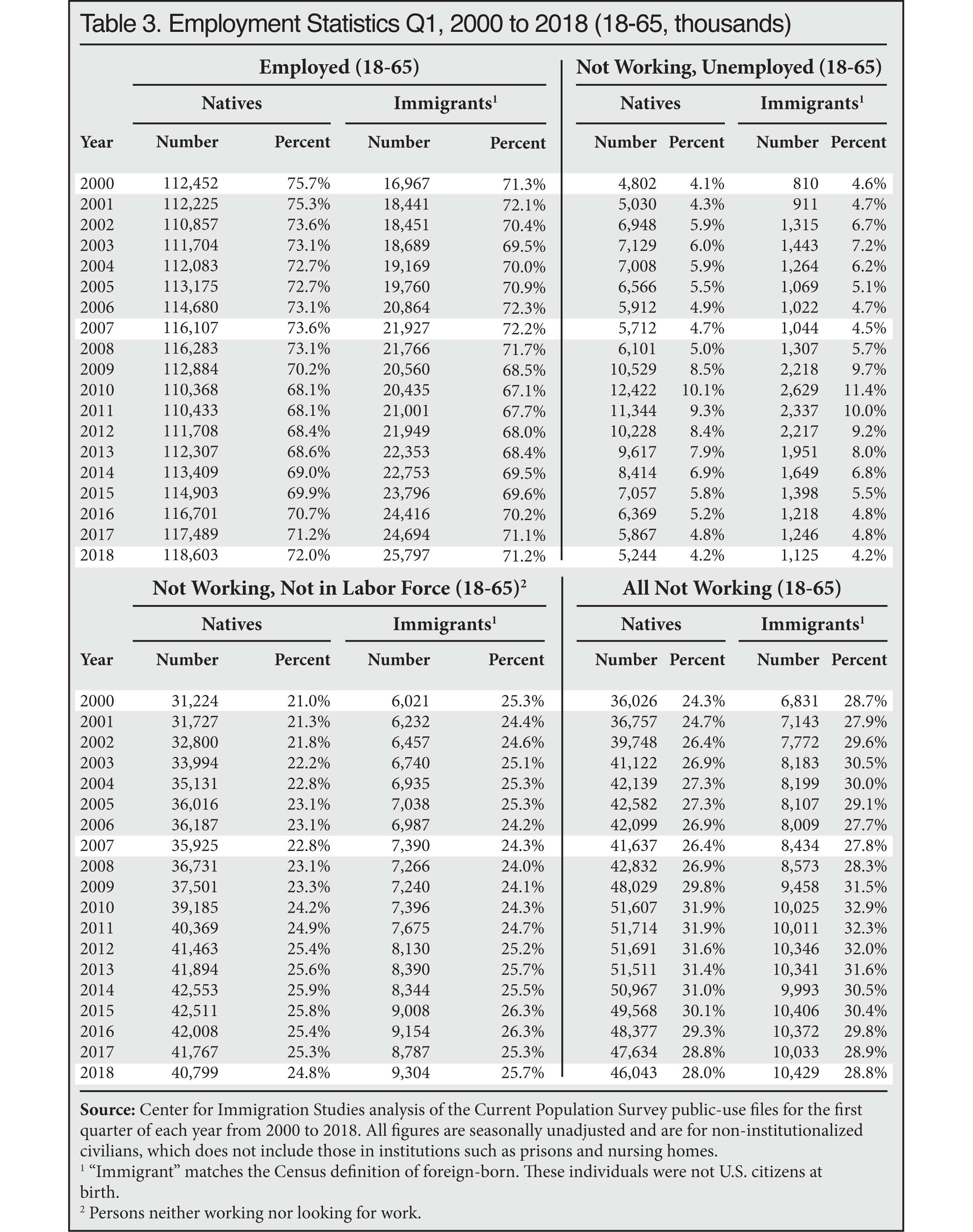 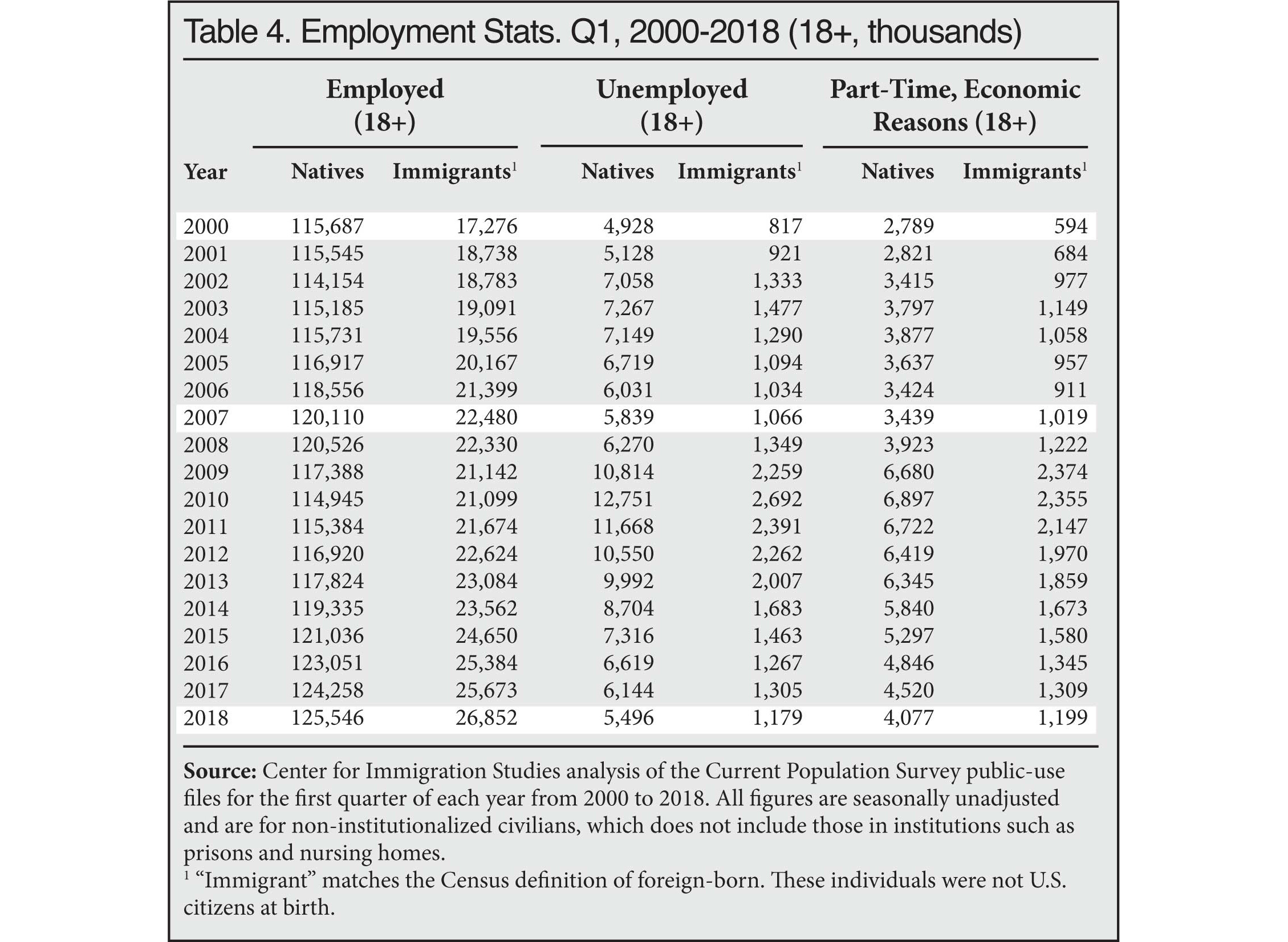 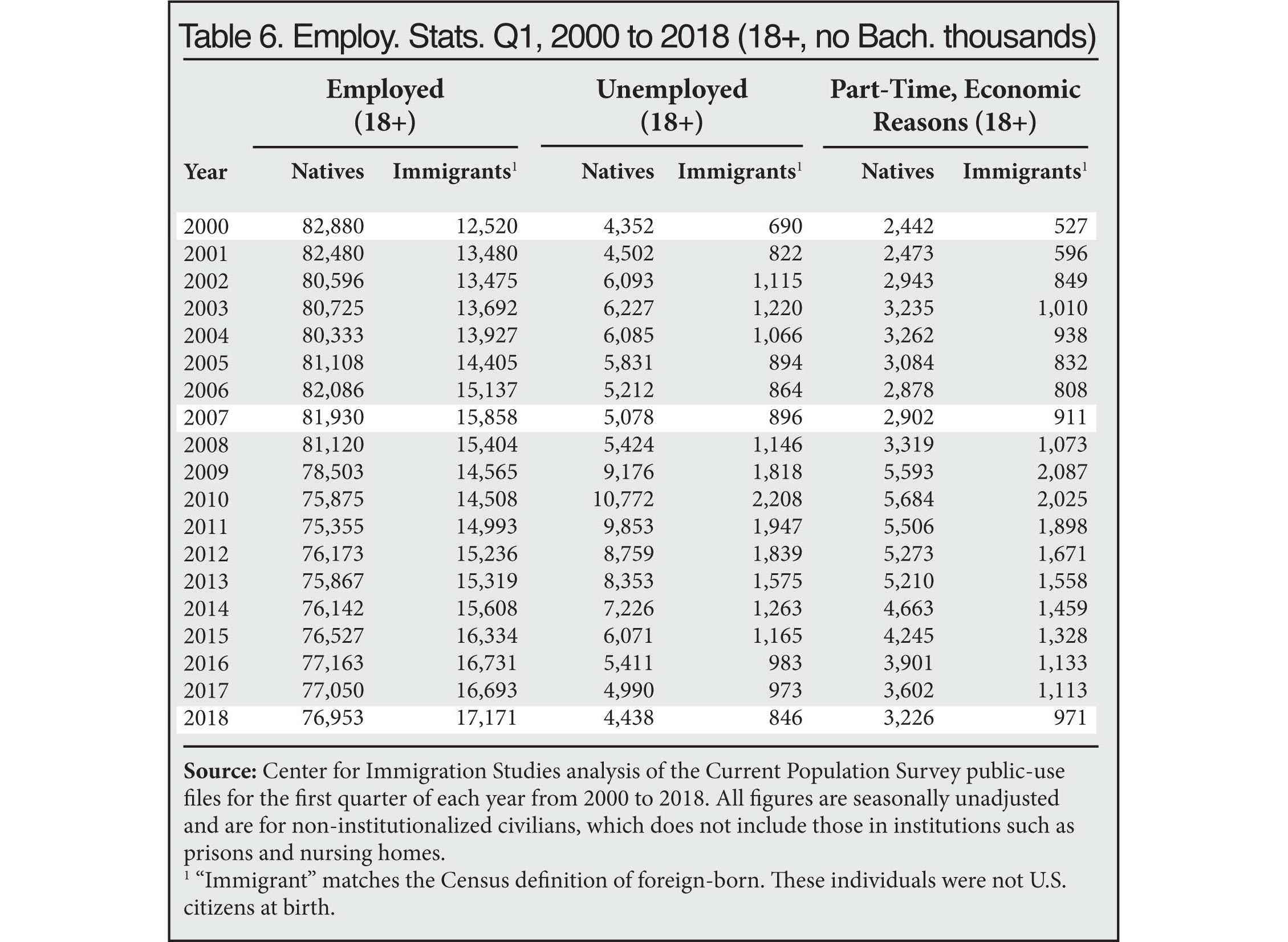 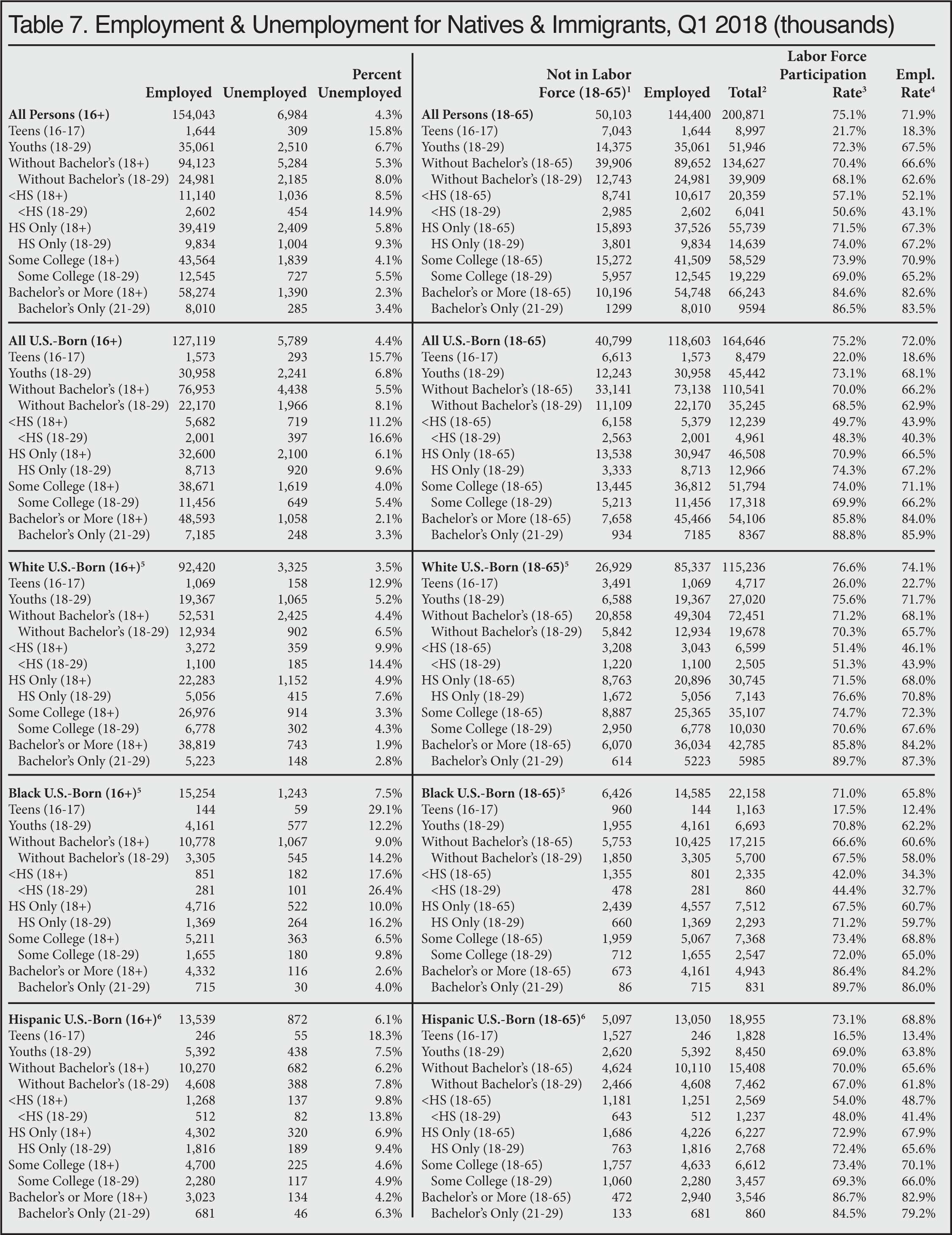 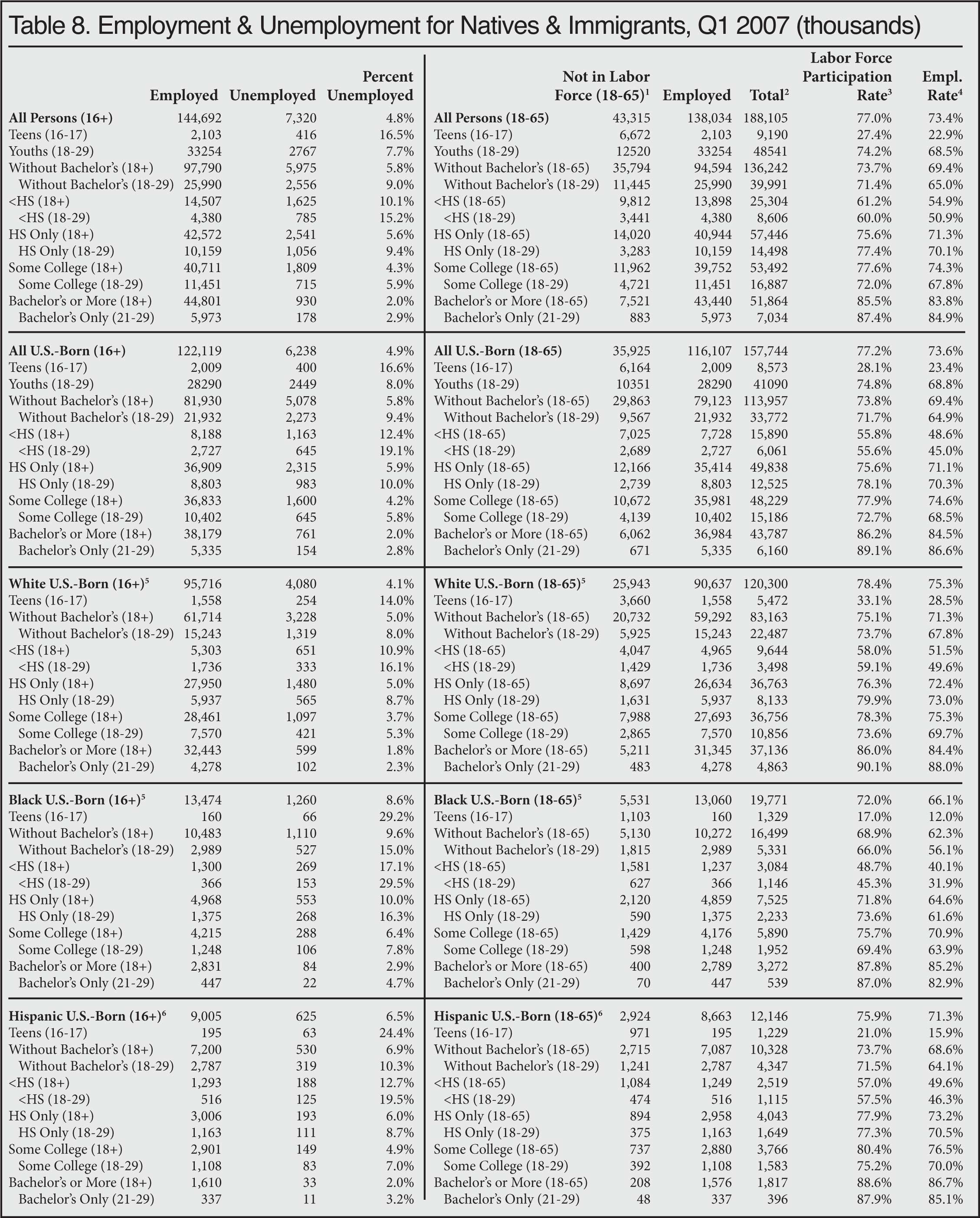 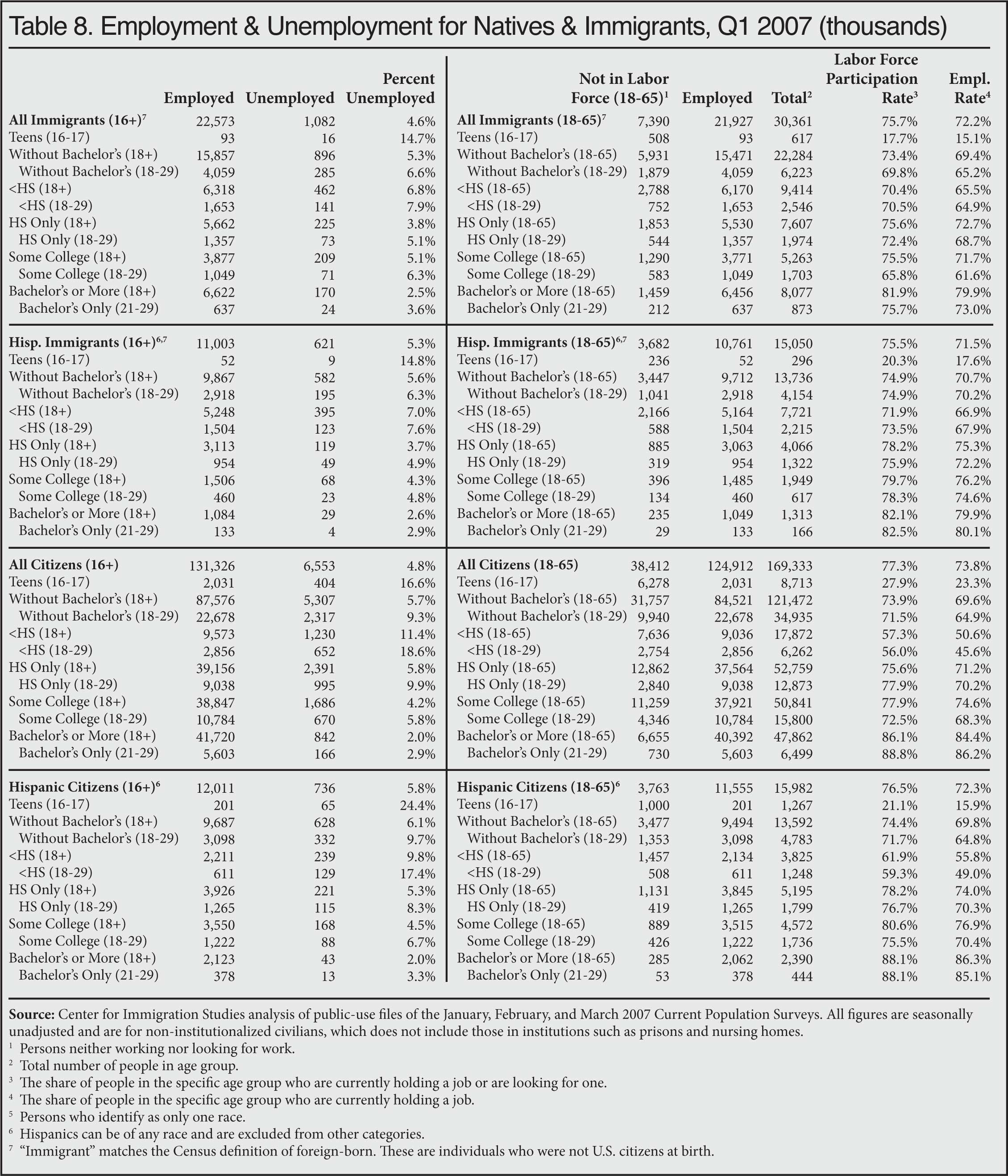 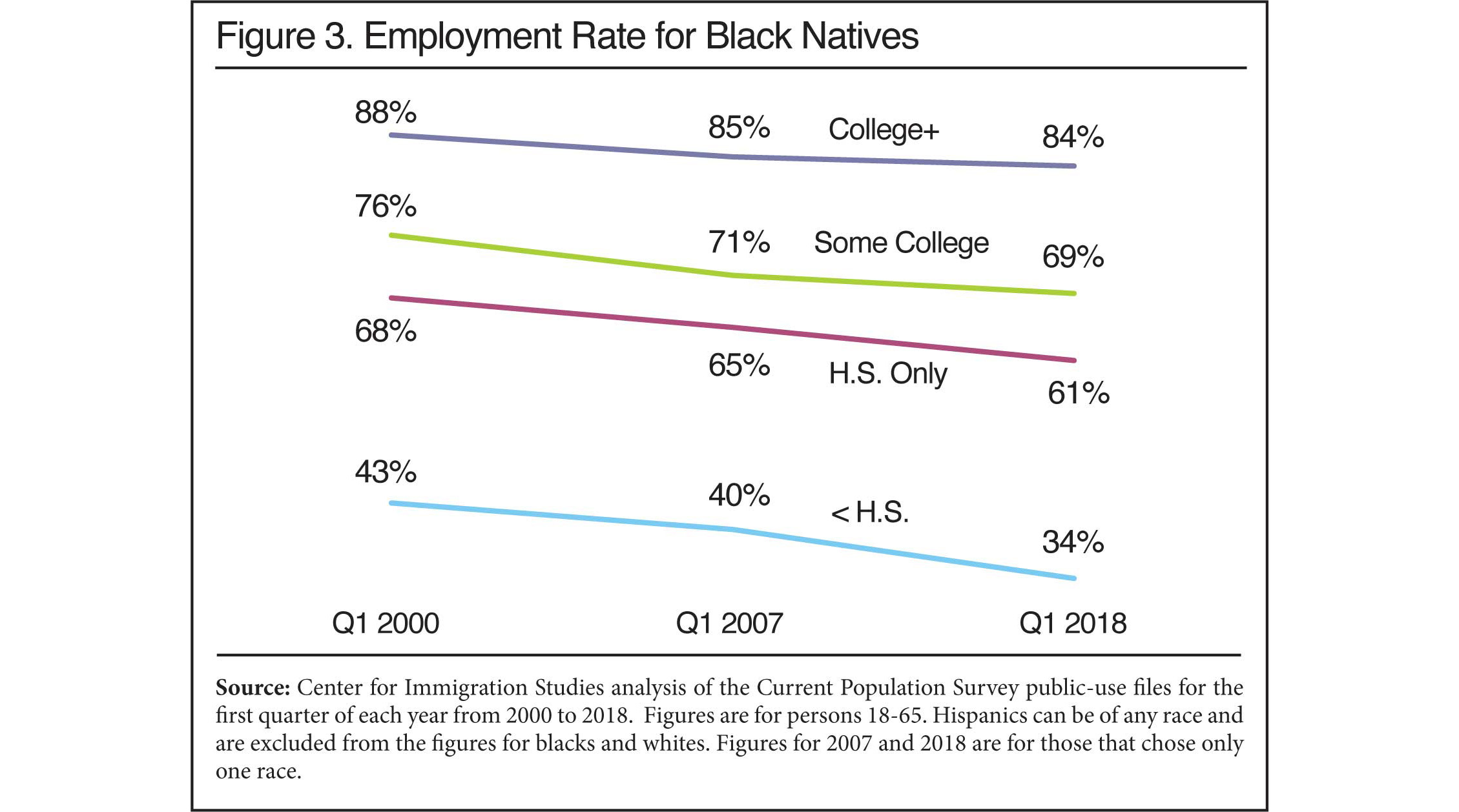 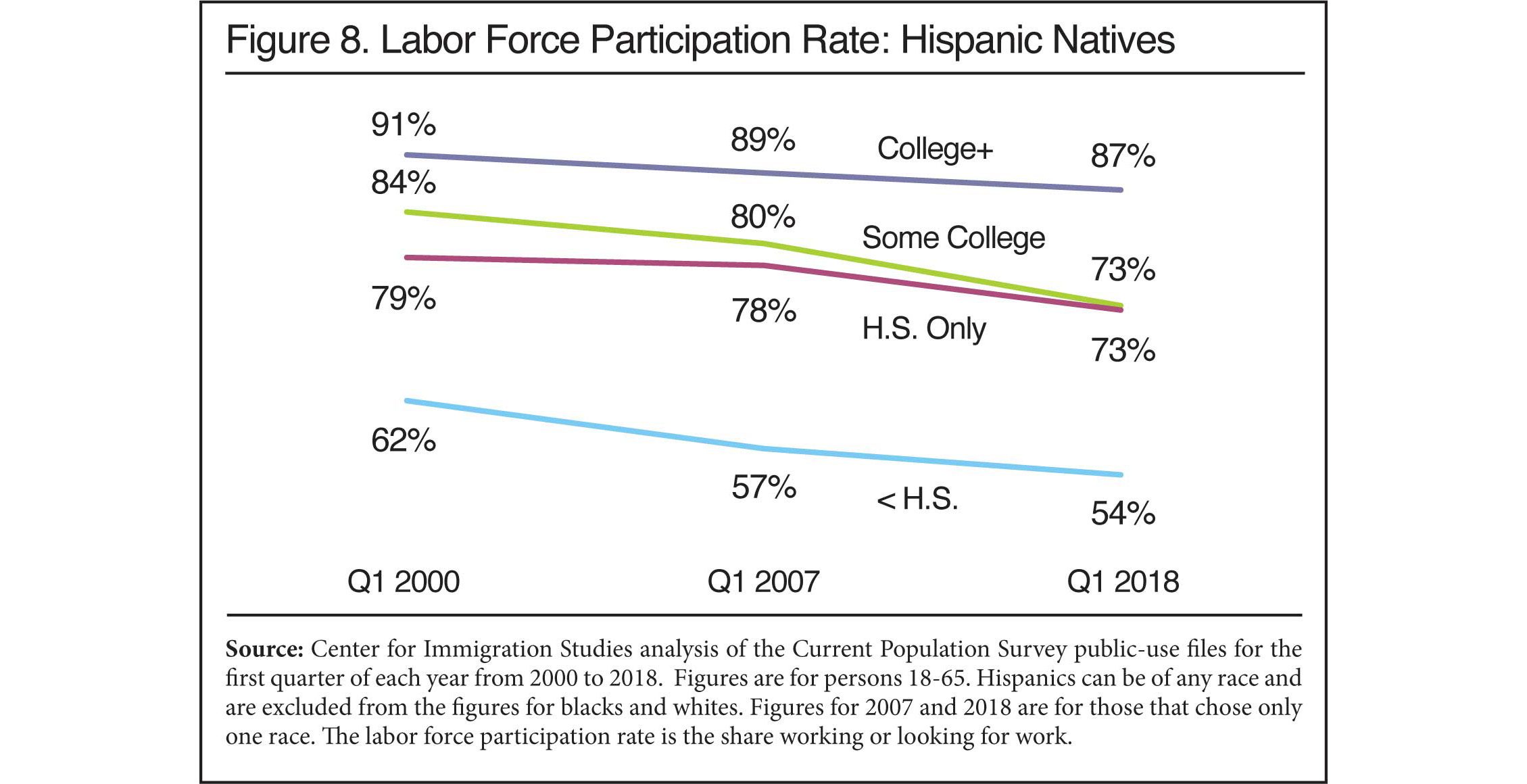 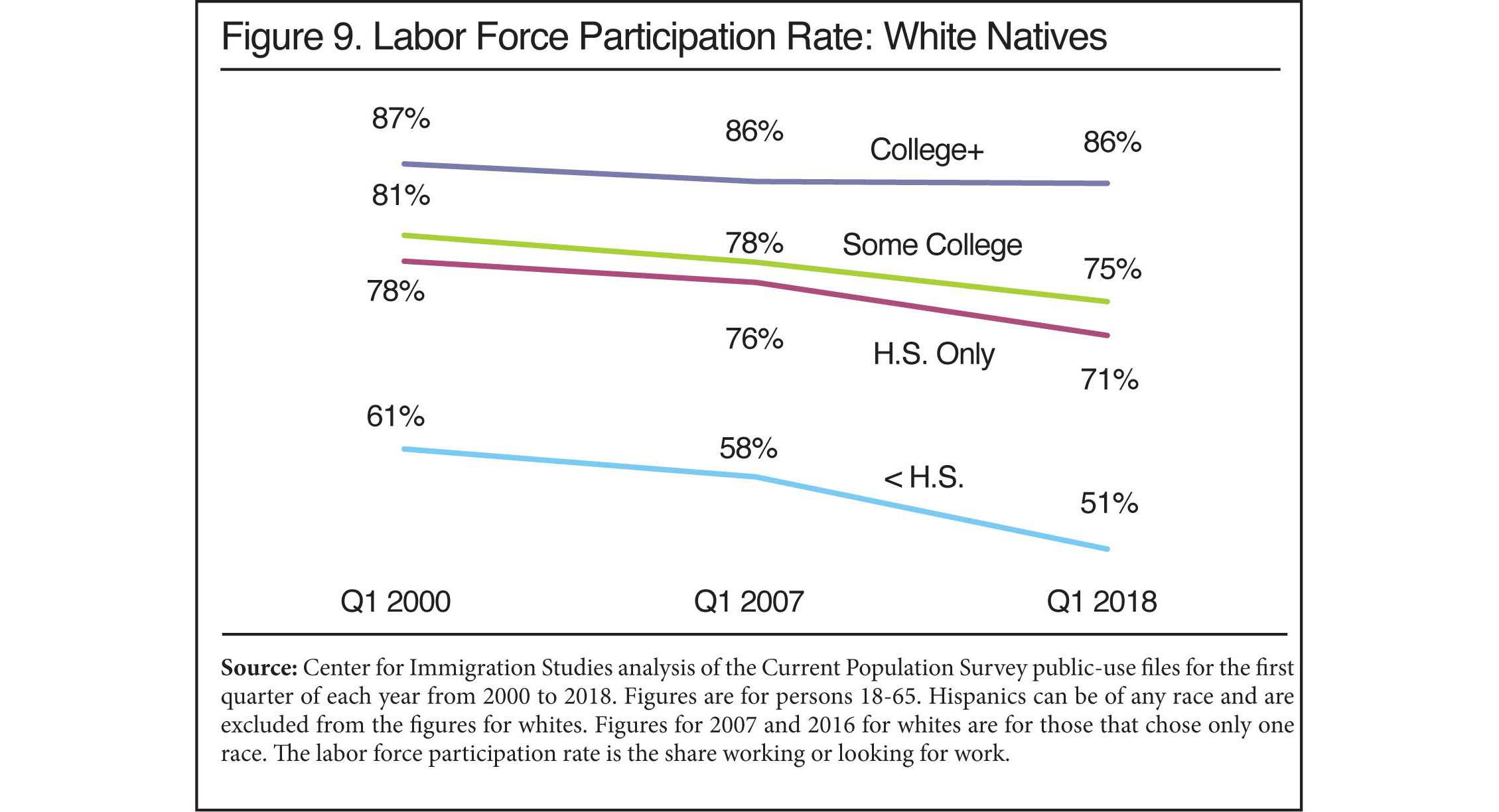