Almost Half Speak a Foreign Language in America's Largest Cities

Nationally, one in five spoke a language other than English in 2017

By Karen Zeigler and Steven A. Camarota on September 19, 2018

Newly released Census Bureau data for 2017 shows nearly half (48.2 percent) of residents in America's five largest cities now speak a language other than English at home. Overall, the number of U.S. residents speaking a foreign language at home reached a record of nearly 67 million. The total number is up seven million since 2010 and has increased by nearly 35 million since 1990.

Data Source. In September of this year, the Census Bureau released some of the data from the 2017 American Community Survey (ACS). The survey reflects the U.S. population as of July 1, 2017. The ACS is by far the largest survey taken by the federal government each year and includes over two million households.6 The Census Bureau has posted some of the results from the ACS to American FactFinder on the Bureau website.7 It has not released the public-use version of the ACS for researchers to download and analyze. However a good deal of information can be found at FactFinder. Unless otherwise indicated, the information in this analysis comes directly from FactFinder.

There are three language questions in the ACS for 2010 and 2017. The first asks whether each person in the survey speaks a language other than English at home. Second, for those who answer "yes," the survey then asks what language the person speaks. Third, the survey also asks how well the person speaks English. Only those who speak a language at home other than English are asked about their English skills. The 1980, 1990, and 2000 decennial censuses (long form) asked almost the exact same questions.

In this report, we provide some statistics for the immigrant population, referred to as the "foreign-born" by the Census Bureau. The foreign-born population is comprised of those individuals who were not U.S. citizens at birth. It includes naturalized citizens, legal permanent residents (green card holders), temporary workers, and foreign students. It does not include those born to immigrants in the United States, including to illegal-immigrant parents, or those born in outlying U.S. territories such as Puerto Rico. Prior research by the Department of Homeland Security and others indicates that some 90 percent of illegal immigrants respond to the ACS.8 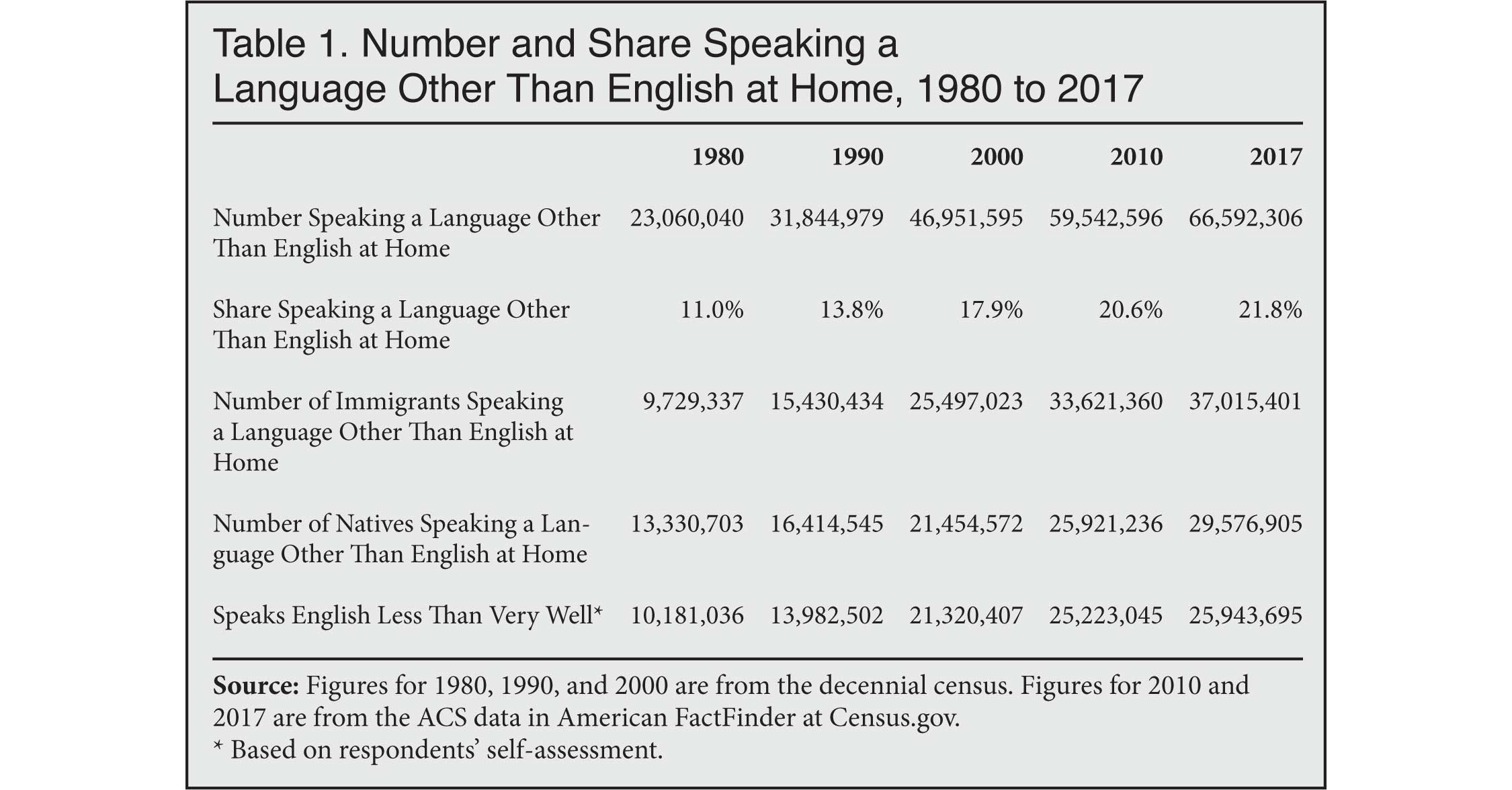 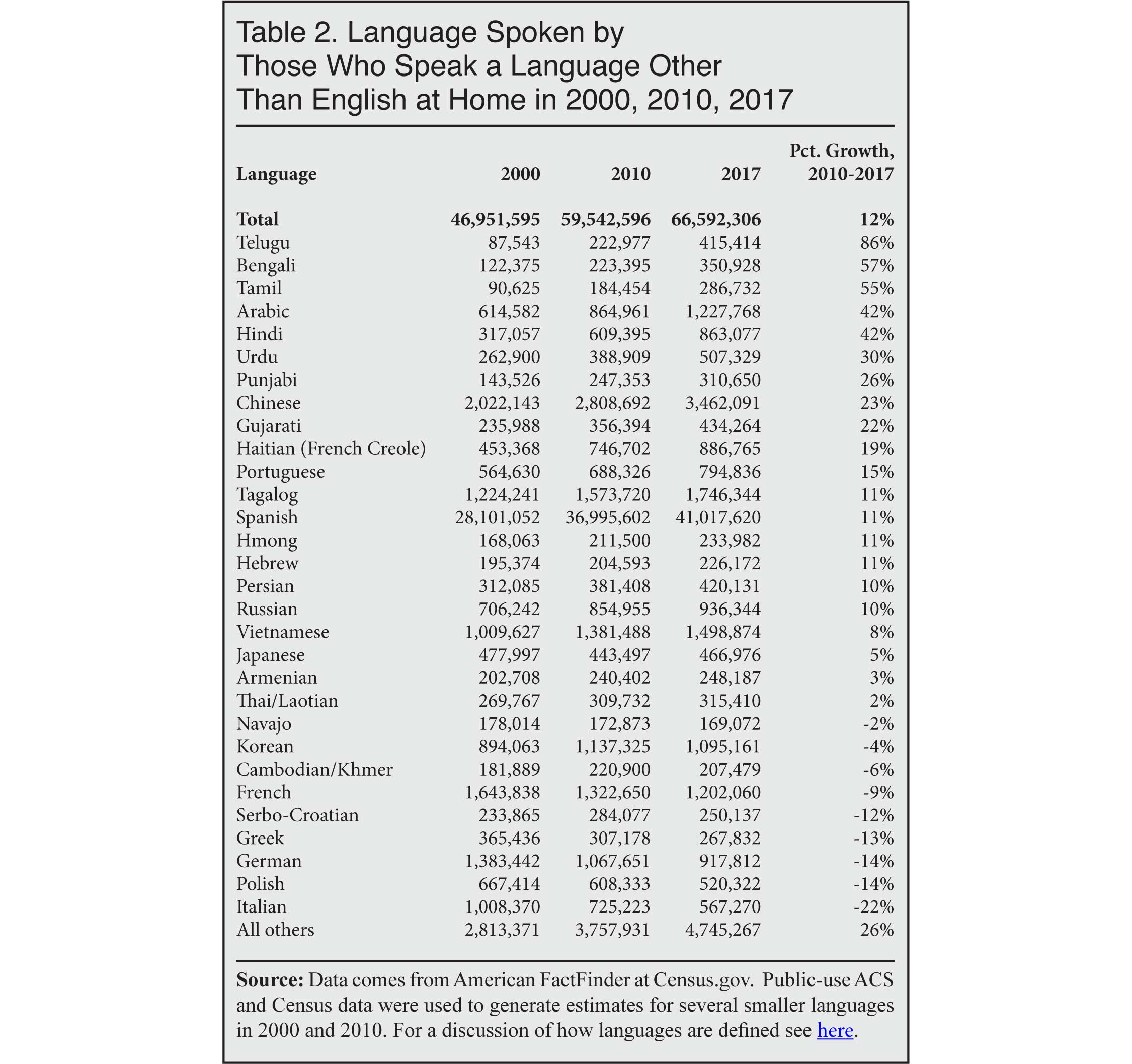 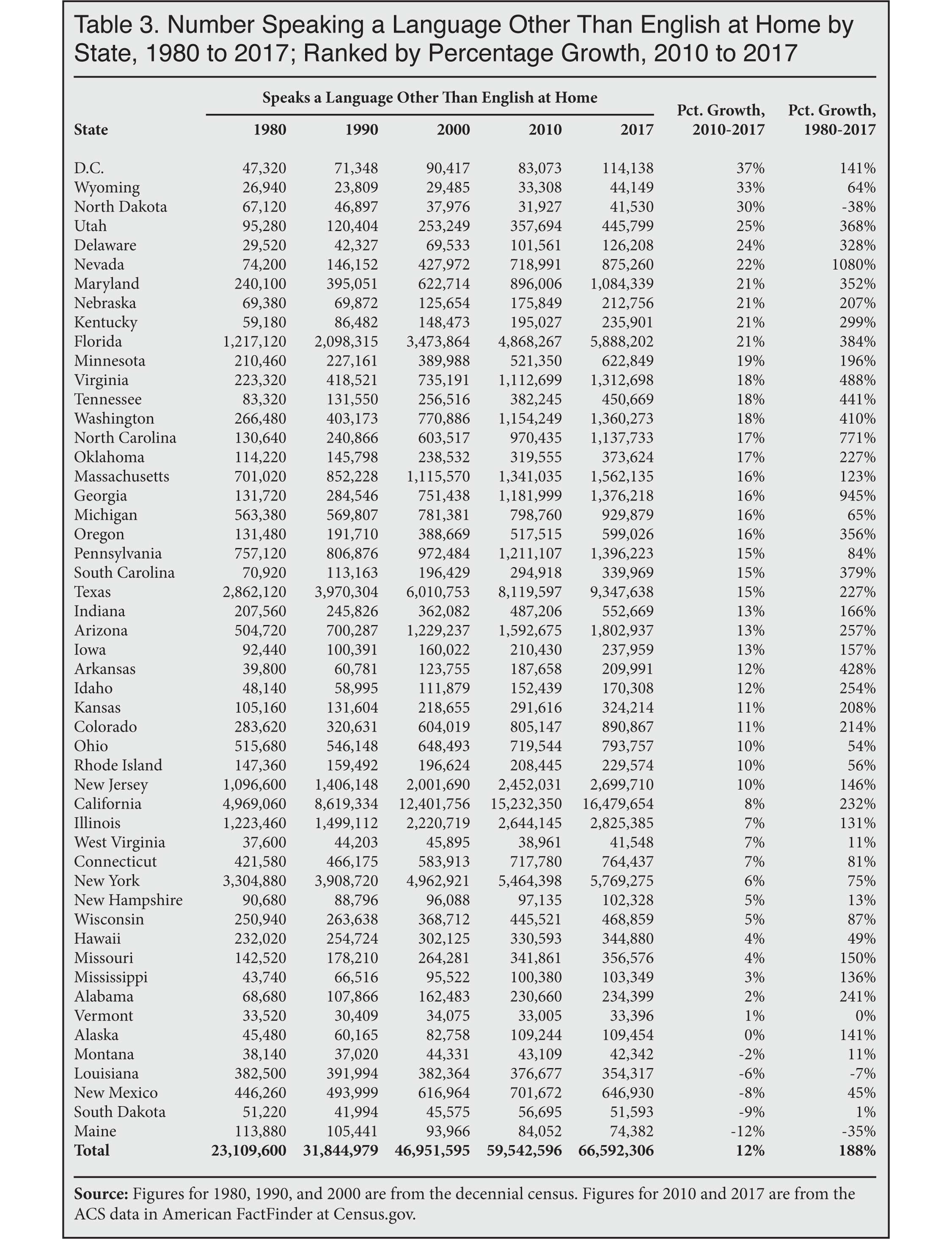 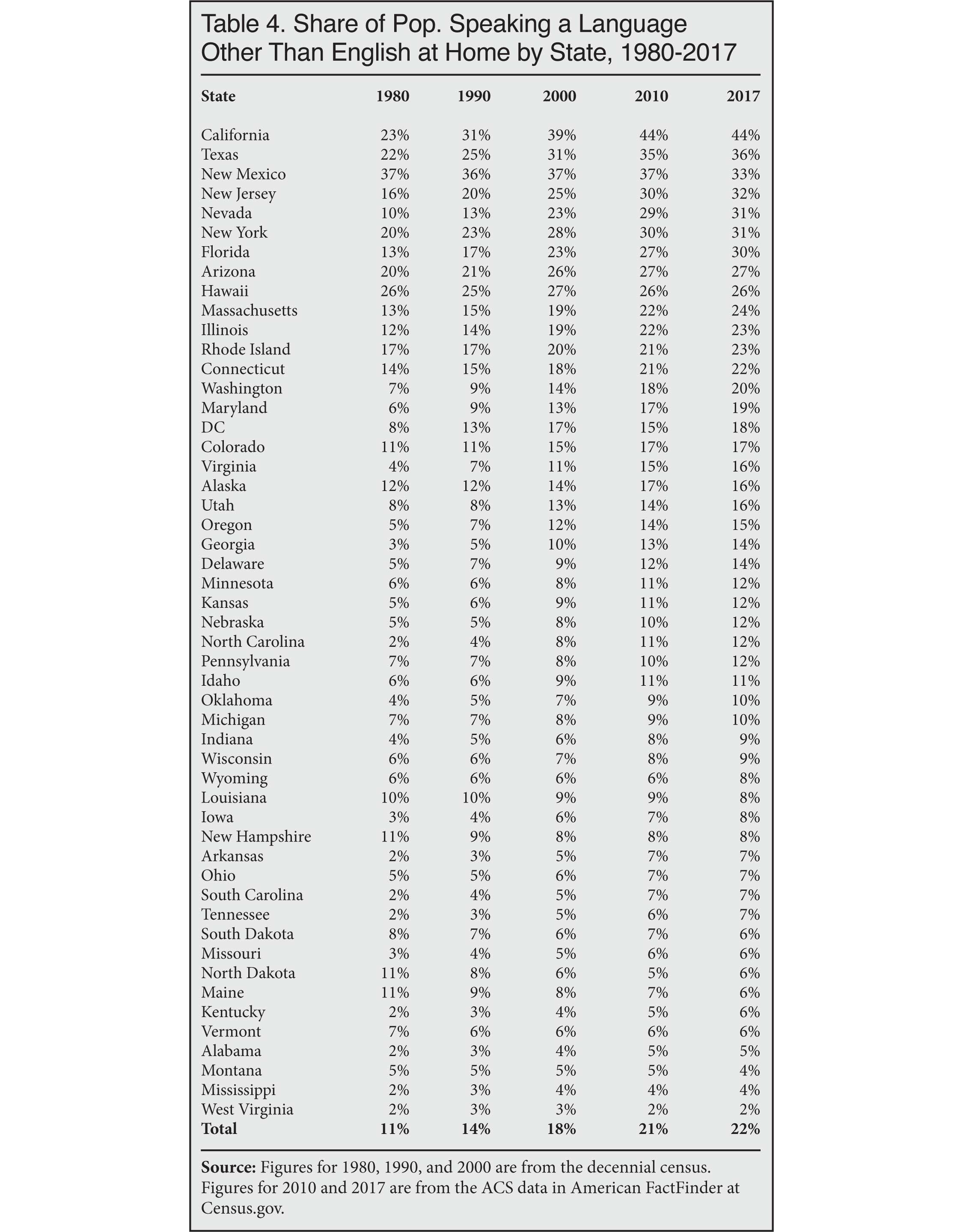 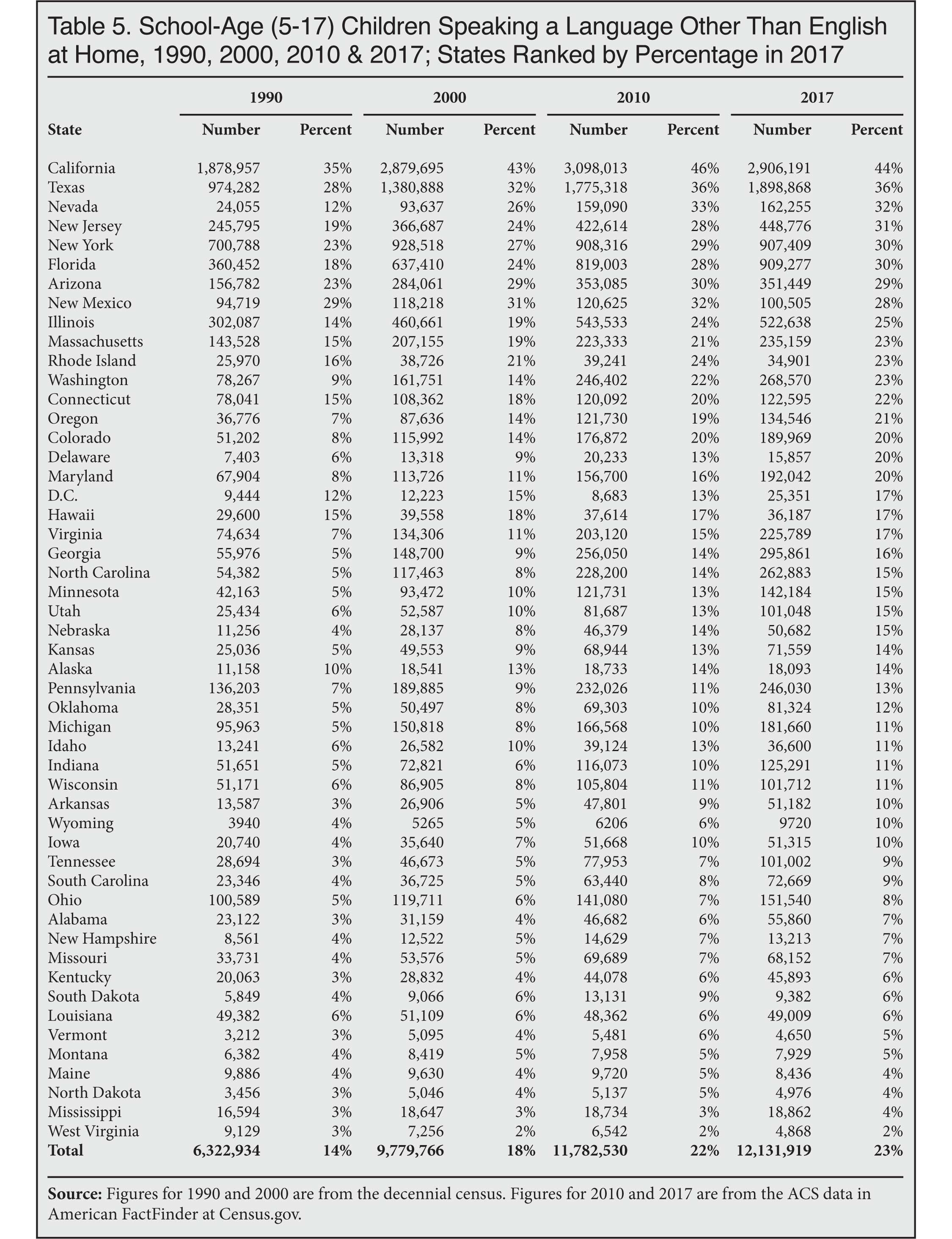 1 Figures for 539 cities and Census Designated Places (CDP) are in the Excel spreadsheet available here. The 48.2 percent figure is based on the entire population of these cities. If the share for each city is averaged together without regard to each cities' size, then 46 percent speak a language other than English. As for the school-age children (5-17) in these cities, more than half (50.3 percent) speak a foreign language.

5 There is some other data that does measure the English-language ability of U.S. residents, including those who speak a foreign language at home. The Program for the International Assessment of Adult Competencies (PIAAC) measured English literacy among a representative sample of Americans between 2012 and 2014. Publicly available data from the PIAAC shows that among people who spoke a foreign language most often at home, 49 percent scored "below basic" on an objective test of English literacy — including immigrants and the native born. "Below basic" has been likened to functional illiteracy. It seems likely that the self-assessment reported in the ACS overstates English-language ability while the PIAAC probably does a better job of capturing language ability. However, the PIAAC data must be interpreted with caution due to differences in question wording. The PIAAC asks which language is spoken most often at home, whereas the census simply asks if a non-English language is spoken at home. Furthermore, about a third of PIAAC participants did not answer the question about language use at home, for reasons that are unclear. See Jason Richwine, "Immigrant Literacy: Self-Assessment vs. Reality", Center for Immigration Studies, June 21, 2017.

7 FactFinder can be found here.