A few years ago I noted that "the amnesty movement has turned the political numbers game into an art form, systematically obscuring the trade-offs inherent in immigration policy." The movement has reached new heights of obfuscation with Alex Nowrasteh and Robert Orr's Cato Institute study, "Immigration and the Welfare State."

Before diving in to that study, keep in mind that on a conceptual level, today's immigrants are likely to consume more welfare than natives. This is not because immigrants are "lazy" — they actually have impressive employment rates — but because they are poorer and have more children to support. Empirically, the most comprehensive dataset shows that about half of immigrant households are on some form of welfare, versus less than one third of native households. Average benefits received by immigrant households are about 40 percent greater than what native households receive.

The Nowrasteh-Orr study says that's all wrong. In fact, immigrants receive 39 percent less in welfare benefits than natives on a per capita basis. How is this possible? By including Social Security and Medicare as "welfare," for starters. 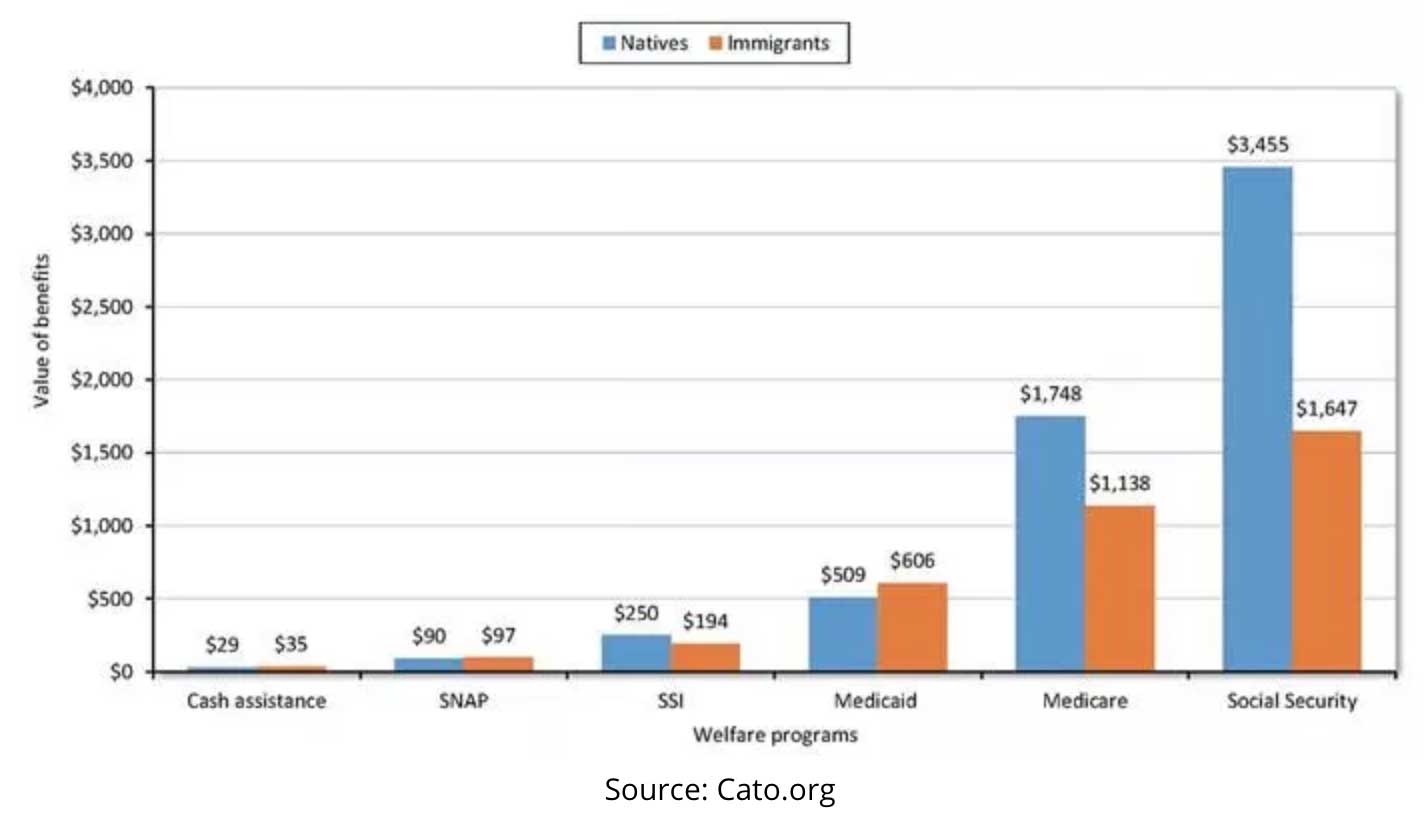 Lumping contributory entitlements with means-tested benefits is incredibly misleading in a group comparison. If I told you that Group A receives more food stamps than Group B, you could infer that a larger proportion of Group A is struggling economically and has turned to the taxpayer for support. By contrast, if I told you that Group X receives bigger Social Security checks than Group Y, then Group X probably earned higher wages, worked longer, contributed more to Social Security, and received a lower return on those contributions. Notice the difference there?

Under the Nowrasteh-Orr model, an immigrant could be cashing a TANF check, shopping at the grocery store with food stamps, paying for doctors' visits through Medicaid, living in a subsidized rental unit, heating it with energy assistance — and all the while be counted as receiving "less welfare" than a native retiree who contributed to Social Security and Medicare his whole career and never once used a means-tested program. This is sophistry.

In measuring the "welfare" component of contributory programs, contributions matter. So if we must leave Social Security and Medicare on that welfare chart, we should consider net benefits — i.e., benefits minus contributions. But doing so would not be kind to the Nowrasteh-Orr thesis. Social Security favors immigrants, as they have somewhat shorter careers, lower average incomes, longer lifespans, and appear to benefit more from spousal coverage. One study from the Social Security Administration calculated that late-Baby Boomers born in the U.S. will lose money to the system. Their Social Security contributions are greater than their benefits, such that participation ultimately results in a 0.4 percent tax on their lifetime earnings. Foreign-born participants, by contrast, receive a 1.2 percent subsidy from the system. (Illegal immigrants are actually pushing down the overall subsidy by paying into the system without being eligible to collect benefits. For legal immigrants, the subsidy is greater than 1.2 percent.) And that's just Social Security. Medicare is even more progressive in its funding and payout structure, so it confers even greater net benefits on people with shorter careers and lower wages.

Entitlements aside, why do immigrants and natives appear to use about the same amount of means-tested benefits in the chart above? Because U.S.-born children of immigrants are counted in the native category. So if an impoverished immigrant signs up her U.S.-born child for Medicaid (or any other means-tested benefit), this would be considered native use of the welfare system. Treating parents as economic units separate from their dependent children is simply incorrect, as any program for children benefits the parents who are otherwise responsible for them.

The Nowrasteh-Orr study obscures the problem of immigrant welfare use. More broadly, it illustrates the unwillingness of advocates to give a single inch on any talking point. Immigration has brought benefits to the U.S., but it has also brought costs, and one such cost is the extra burden placed on the welfare state. Why is that so hard to acknowledge? When we deny tradeoffs, insisting that our position is always win-win-win for everyone, it leads to a muddled and unproductive debate.