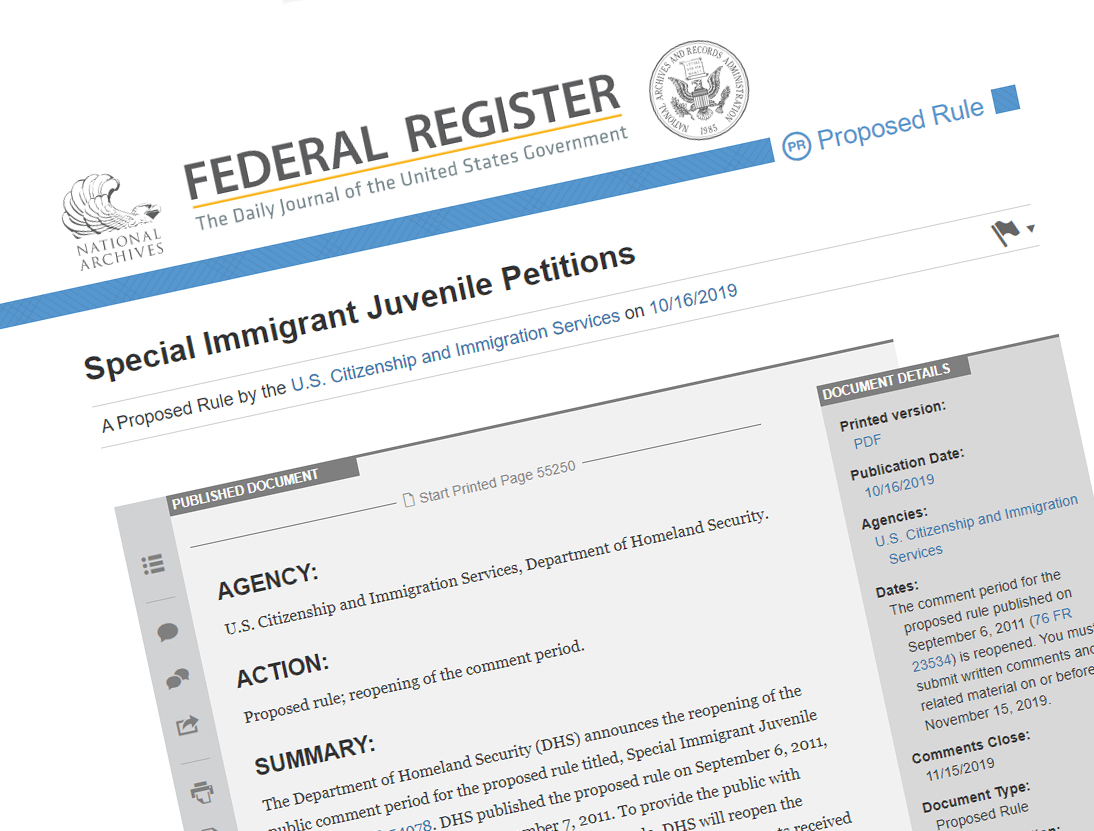 As previously noted, the clock ran out on the Trump administration before it could finalize key regulatory reforms that would have enhanced immigration integrity and strengthened protections for American workers. Rather than spiking this work because the current (Biden) team doesn't like the old (Trump) team, the current administration should pick up where the prior one left off and finalize these commonsense reforms.

In this post I make the case for why the Biden administration should complete the Special Immigrant Juvenile Petitions final rule. The special immigrant juvenile (SIJ) classification was created by Congress in 1990 to provide a pathway to legal status for certain alien children in the U.S. foster care system who required judicial intervention to protect the minor from parental abuse, abandonment, or neglect. The full eligibility criteria laid out by Congress for SIJ status is found at INA 101(a)(27)(J).

In 2011, President Obama's Department of Homeland Security (DHS) published a Notice of Proposed Rulemaking (NPRM) proposing certain reforms to the SIJ program. However, the Obama administration never finalized this rule. Subsequently, over the years, the SIJ classification was increasingly targeted by alien minors solely for the purpose of obtaining lawful immigration status and not due to abuse, neglect, or abandonment by the parents. Rather than dismissing this NPRM due to political differences, in October 2019 DHS under the Trump administration reopened the comment period to revive this NPRM and give the public an updated opportunity to reengage on these issues. The thinking behind this strategy was that reviving the Obama-era proposal was the most efficient way to realign the SIJ classification with congressional intent and remedy shortcomings in the regulations that threatened program integrity rather than starting from scratch with a new NPRM.

After considering comments received during both the 2011 and 2019 comment periods, USCIS staff drafted a final rule that included some of the provisions originally proposed by the Obama administration. The most critical aspect of this rule is how DHS defines "consent" within the statutory definition because the current regulatory definition is flawed and was resulting in numerous judicial losses for USCIS. The final rule would correct this, introduce consistency across SIJ adjudications, and free up Office of the Chief Counsel resources for other matters.

The final rule was cleared by then-USCIS and DHS leadership and formally submitted to the Office of Information and Regulatory Affairs (OIRA) on October 13, 2020. OIRA did not "conclude review" (government lingo for approve) on it before Biden's inauguration. The final rule was withdrawn by the Biden administration on January 26, 2021 for further review.