The Pause That Refreshed 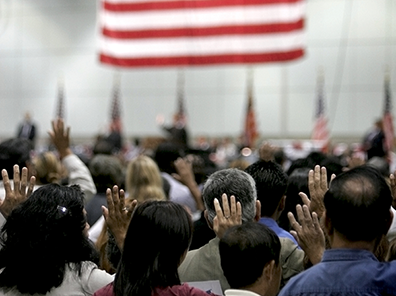 I’m afraid Henry Olsen erred in a recent column about a draft document by the aborted America First Caucus.

Olsen wrote that the caucus draft had “a warped, nativist view of America” because it praised the assimilative benefits of past “pauses in immigration”. He arrived at this conclusion because, “the 1924 quotas and similar quotas passed in 1917 and 1920 are the only examples of legally enforced immigration ‘pauses’ in U.S. history,” and those pauses were based on national-origins quotas that preferred northern Europeans over others.

I have no “windows into men’s souls”, as Queen Elizabeth I put it, so maybe the author(s) of the draft do have “a warped, nativist view of America”, but the evidence Olsen provided does not support such a stark conclusion.

I think we can all agree that selecting immigrants based on national origin is an idea best left in the past (though it lives on in today’s egregious green-card lottery). But just because the legislation that effected the 1924–65 immigration pause was flawed doesn’t mean the pause itself was bad policy. As with the natural pause in immigration from the French and Indian War until the Irish Potato Famine, the 20th-century slowdown in immigration was indeed “absolutely essential in assimilating the new arrivals”, as the draft said. And it was a slowdown, not a shutoff; we took 7.3 million legal immigrants in the 40 years from 1925 to 1965, but during the prior four decades, we’d taken more than triple that, 23 million, and badly needed to dial back on new arrivals.

That pause allowed for what Washington had described as the mark of a successful immigration policy: “by an intermixture with our people, they, or their descendants, get assimilated to our customs, manners and laws: in a word, soon become one people.” It pulled both whites and blacks from the backward areas of the South into the dynamic modern economy of northern cities, unified us for the trials of depression and war, and made possible a broadly shared post-war prosperity.

The immigration pause especially improved the condition of black workers. The black-run magazine The Messenger wrote in 1925 that the immigration cut “also gives the Negro worker a strategic position. It gives him power to exact a higher wage ... on the one hand, and to compel organized labor to let down the bars of discrimination against him, on the other.”

That improvement contributed to the eventual success of the Civil Rights movement, ironically leading to the passage of the 1965 immigration law that did away with the national-origins quotas that Olsen rightly decries. But the supporters of the 1965 law saw it almost exclusively as a civil-rights change; i.e., it was intended only to clean out the discriminatory elements of immigration law without increasing the number of immigrants. Even Jack Kennedy, the moving force for what became, after his death, the 1965 law, wrote in his politically influential book A Nation of Immigrants that we should keep the immigration pause in place but merely change the mechanism for selecting immigrants:

Of course, it didn’t work out that way — the 1965 law kick-started an even larger immigration wave than the 1848–1924 one. And 56 years later, we need another pause, one that avoids the mistakes of a century ago, but delivers the same benefits. In the words of then-Sen. Jeff Sessions, “What we need now is immigration moderation: slowing the pace of new arrivals so that wages can rise, welfare rolls can shrink and the forces of assimilation can knit us all more closely together.”

Nothing “warped” or “nativist” about that.