‘Let’s Say It’s Not an Amnesty’

The latest version of the reconciliation bill in the House contains a giant amnesty for at least 7 million illegal aliens.

How do we know it’s an amnesty? Because House Democrats are insisting it’s not an amnesty. 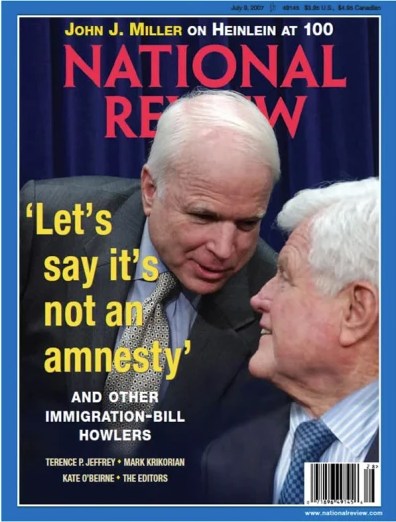 This hackneyed talking point is a dead giveaway. (The title of this post is from National Review’s July 9, 2007, cover, about John McCain and Ted Kennedy’s proposed non-amnesty amnesty.) The House Judiciary Democrats’ talking points on the immigration provisions in the bill claim that this latest attempt to sneak an amnesty into the reconciliation bill (this is the third try, the Dems’ Plan C) is not an amnesty for two reasons.

First, it’s supposedly temporary. The proposal would grant immigration parole to illegals here since 2011, providing them work permits, Social Security numbers, and driver’s licenses, and everything that flows from that — effectively, a “DACA-for-All” program. But, these benefits “will not be available beyond September 30, 2031.” Two points here: Ten years is not “temporary,” and in any case, there’s no chance that on September 30, 2031, anyone’s status will be terminated. DACA, after all, is also supposed to be temporary, and yet the courts stopped the Trump administration from ending it. And the template for DACA, called Temporary Protected Status (for illegals from countries that suffered natural disaster or civil strife), is not actually temporary, either — lawless judges stopped the previous administration from even allowing the built-in expiration of TPS grants to take place. Passage of this measure would mean de facto permanent status for all beneficiaries.

The second reason House Democrats claim their amnesty isn’t an amnesty is almost unworthy of comment: “These benefits are not just handed out to anyone.” Well, nothing ever is — that doesn’t mean it’s not an amnesty. The 1986 amnesty, after all, had eligibility requirements. Heck, even Jimmy Carter’s amnesty for Vietnam-era draft-dodgers wasn’t “just handed out to anyone” — those who had engaged in violence or who deserted after enlistment were not covered. And while this amnesty wouldn’t be “just handed out to anyone,” the criminal bars are looser than in proposals in earlier years, ensuring that, in the words of the fact sheet from House Judiciary Republicans, “certain criminals and other bad actors will be granted parole.”

Contrary to the Democrats’ protestations, anything that lets an illegal alien stay here legally is an amnesty. A day may come when amnesty is called for, but it is not this day.

The reconciliation bill also includes gimmicks to increase legal immigration and, unlike previous amnesty proposals, does not even pretend to strengthen enforcement going forward. These are all bad policies. But reheating the stale claim that this amnesty isn’t really an amnesty is truly comical.