A tricky, unreported route to the U.S. border from U.S. ally Costa Rica to foe Nicaragua

The illegal smuggler's settlement known unofficially as "La Trocha", the Nicaragua side of the street. Photo by Todd Bensman.

LA TROCHA, NICARAGUA — A young woman who makes her living driving U.S.-bound migrants to smuggling guides recently snared three Haitians from a bus station and drove them through 40 miles of rolling pineapple plantations and jungle until arriving at this tough frontier “town” of nefarious birth and purpose.

Dirt-floored, wood-plank hovels line both sides of an almost impassible road that runs through the settlement. One trash-strewn side is Costa Rica. The other side of the road, 20 feet away, is Nicaragua, though nothing at all would indicate that it is a major international border between two countries, like maybe a sign, fence, or customs booth.

“You’re safe as long as you stay on this side of the street and as long as it’s daytime,” the driver advised a Center for Immigration Studies analyst and interpreter she let follow in a separate vehicle.

In fact, officially, La Trocha doesn’t even exist. (The word "trocha" has several meanings in Spanish, including "shortcut".) It shows up on no map. Neither country recognizes La Trocha as anything more than an outlaw squatter’s settlement. It cropped up on an internationally disputed abandoned road about five years ago for one main purpose that, especially these days, probably would interest many American lawmakers and immigration policy experts, if they only knew the extent of what is happening here.

The woman drove her three Haitians to La Trocha because this is a smuggling town, pure pirate, run by two competing criminal gangs that move people and contraband from one side to the other, sometimes doing battle. Police, military, and journalists avoid this place. But it does seem to operate like a company town; everyone here makes their living as foot guides, stash house operators, and merchants of food, water, and outdoor clothing and gear for the constant arrivals and departures of migrants from very, very far away.

The woman driving the Haitians, who admitted they felt nervous here, let them out at a filthy, dirt-floor hovel on the road’s Costa Rican side and had them sit in plastic chairs while she went somewhere in town. After a time, she and a young man led them over to the Nicaraguan side five structures up the road. In one of the houses, they joined more than 30 other Haitians the smugglers had stacked up in preparation for well-oiled assembly line smuggling all the way through to Honduras.

Like it or not, what happens in La Trocha is the American security problem about which most Americans know nothing.

In recent months, La Trocha and its environs in the northeast corner of Costa Rica (southeast Nicaragua), and to some extent around the northwestern town of La Cruz, have become ground zero of a roaring unreported human smuggling conveyor belt to the U.S. southern border. The machine on this section of a long international trail is transporting northward unprecedented thousands of “extra-continental” migrants from around the world, meaning non-Mexican and non-Central American peoples.

As CIS has reported recently from Costa Rica, this surging category of migrant raises a different kind of national security specter than do Spanish-speaking migrants because many of the former hail from countries of Islamic terrorism concern, from African war-atrocity zones, or from nations too distressed to provide criminal background checks.

As many as 10,000 migrants from places like Mauritania, Senegal, Pakistan, Somalia, Yemen, Syria, Iraq, India, Haiti, and Cuba have passed through this borderland since January 2021, one knowledgeable local smuggler said. Other reporting indicates that a massive new swell is underway among distant peoples sensing the Biden administration has opened the border wide.

It’s moving through Costa Rica in plain sight, but remains unseen or purposefully under-acknowledged even by humanitarian aid groups, who seem few and far between here. While the notoriously fatal Colombia-Panama Darien Gap hike of 8-12 days has attracted some media attention over the years, its vast ungovernable bi-national spaces challenge solutions to slow the flow.

The one through Costa Rica and Nicaragua, though, may offer that opportunity should any American will emerge to leverage at least Costa Rica, a cooperative ally.

But for the time being, the Costa Rica-Nicaragua bottleneck somehow remains invisible enough that smugglers feel fairly comfortable operating and discussing their conveyor belt openly with little fear of repercussions. 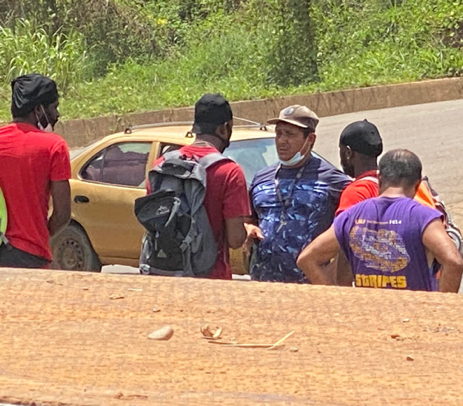 Migrants in Los Chiles openly barter with smuggler drivers who will take them to various border crossings in far northeastern Costa Rica. Photo by Todd Bensman.

CIS had little trouble interviewing five different smugglers in northeastern Costa Rica on public streets. Many freely negotiated smuggling deals in the wide open with migrants arriving by bus or taxi in Los Chiles, as local immigration officers and border police drove by.

A former official of the U.S. Department of Homeland Security, who worked on immigration security matters in the region for years, told CIS that Costa Rica and Nicaragua — and probably the Biden administration — all like things quiet this way so that no one has to do anything expensive or painful about it.

“None of them are going to really have to do anything until there’s media coverage, until things start getting out there,” the former DHS official said. “As long as there’s no political pressure, they’re not going to do anything.”

In addition to broad American ignorance of the humanitarian and security implications of this mass extra-continental migration crisis, another significant reason for inaction is that Panama and Costa Rica feel no incentivizing national interest. Why would they spend national treasure to interdict migrants who only want to continue to the north and not stay to become burdensome?

Arrest and deportation operations in Costa Rica or Panama would only create expensive problems for these governments to provide detention housing, medical treatment, food, legal processes, and high-cost deportations by air to distant countries in Africa and Asia, the former U.S. officer said.

“These are countries that do not have the resources or the capability. When you throw 200 to 400 migrants at them a day, what does that cost them to arrest?” he said. “Nobody’s saying, ‘Hey you need to do something about this!’ The reality is these people are going to the United States, not staying in these countries.”

“The way they look at is, ‘This is really not our problem; it’s the United States’ problem, so if they want us to do anything about it, they’ll have to give us some resources.’ Until there’s someone who steps up, or there’s an issue, that’s the way it’s going to be.”

In recognizing these dynamics, I recommend in my book, America’s Covert Border War: The Nation’s Battle to Prevent Jihadist Infiltration, that the United States, when it finally chooses to retard the higher-risk, extra-continental traffic, will need to diplomatically incentivize both Costa Rica and Panama (and probably Mexico) to begin detaining and deporting migrants by air at their own southern borders. The idea is that heightening the risk of capture and deportations elsewhere will act as a suppressant on migrant willingness to invest tens of thousands of dollars in smuggling fees that likely will never pay off.

But to enable such operations that host nations don’t want, I recommend in my book that the United States provide those countries with all of the resources necessary to house, shelter, adjudicate asylum claims, and deport by long-distance air.

As for Nicaragua, hostility and distrust have long characterized the Daniel Ortega government’s relationship with the United States and its allies in the region, aligning instead with Iran, China, and Russia. A U.S. government would not be able to count on influencing such a hostile Nicaragua to cooperate in any scheme to control illegal immigration through its territory.

But only Costa Rica is really necessary to break the flow when the day comes to do so. Knowledge that the traffic exists in Costa Rica is central to the day the United States will need or want to clamp down on it there.

Since about 2016, Panama and Costa Rica took over most of the illicit people smuggling coming through their countries with a policy called “controlled flow,” about which CIS reported extensively in early 2019. Panama started it as a way to replace black market smuggling chaos with something more orderly and humane. The country provided camps for temporary shelter and food, medical assistance, and access to money transfer services. It then issued temporary legal passes to be in the country for the time needed to coordinate commercial buses to take them to Costa Rica’s southern border.

Costa Rica adopted controlled flow busing, too. For the migrants, controlled flow was a great deal. The policy incentivized immigration by eliminating smuggling costs for two countries, rather than some other kind of policy that would heighten the risk to huge smuggling fee gambles.

By contrast, Nicaragua’s anti-western Sandanista regime, which maintains blood feuds with Costa Rica and is openly hostile toward the United States, was having none of doing controlled flow with hated governments. Costa Rica must have found a national interest in allowing the smugglers in its northern regions to remain in business all during the controlled flow years, doing the public service of clearing the decks of Costa Rica’s migrant population. Nicaragua seemed just as keen to let the smugglers move them north into Honduras. 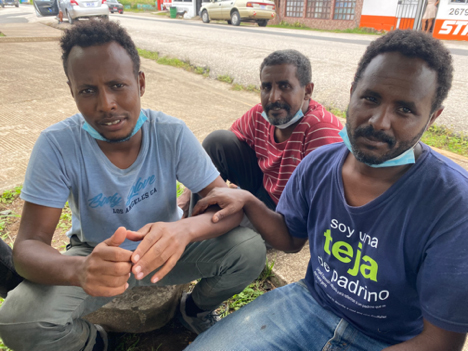 Today, however, Nicaragua has its military guarding stretches of its border with Costa Rica. The soldiers sometimes return migrants to Costa Rica, which won’t hold them. (Many Nicaraguans also take smuggling bribes as CIS recently witnessed, keeping the way mostly clear.)

In March 2020, Panama and Costa Rica ended controlled flow for the pandemic. Restive migrants backed up in Panamanian and Colombian camps, lured by the Biden administration’s new leniency. In April, Panama resumed controlled flow to clear the camps, but Costa Rica has not so far.

Costa Rica’s government, still suffering from the virus, surely counted on its northern smugglers to clear the decks of all the busloads of people the Panamanians were sending.

This helps explain why Costa Rican law enforcement and immigration officers in the north mostly ignore both migrants and smugglers, though they do occasionally bust significant smugglers.

A senior commander in Costa Rica’s border police, who was not authorized to speak, acknowledged that interdicting migrants is not a top government priority. Rarely do Costa Rica’s immigration enforcement agencies feel pressure from the American embassy to do anything more, the commander said.

“There are huge masses of people going through this border,” the commander said. “But our areas of interest are more in the smugglers than the migrants, unless the migrants are doing something else illegal.”

The result is a barely hidden free-for-all, where immigration and police turn a blind eye to a local bonanza that is not conducive to American national security. Buses and taxis ferry in the migrants from the Panamanian border to Los Chiles. Drivers swarm around the migrants to sell them smuggling packages. Police vehicles drive right by and don’t stop. 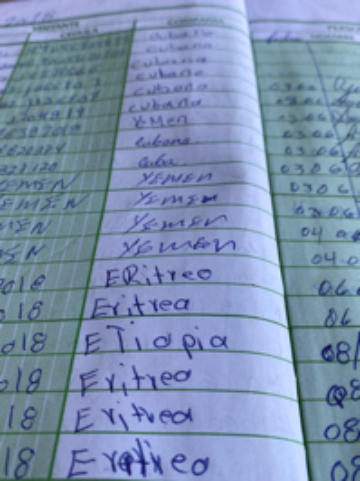 CIS met and interviewed Mauritanians, Senegalese, Eritreans, Haitians, and Cubans as they dickered with smugglers or were driven to areas around La Trocha. A local hotel log book in La Cruz showed that many dozens of Indians and Sri Lankans have come in this year, as well as Yemenis, Cubans, Haitians, Pakistanis, and from a dozen African nations like Nigeria and Burkina Faso.

Biden administration officials have yet to mention or discuss extra-continental traffic, either unaware that it is happening, uninterested, or averse to drawing attention to it lest they be forced to do something about it.

And so the flood continues, at odds with U.S. national security.