A Reminder that Afghans Are Using the Border End-Run Option 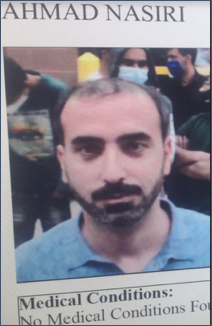 A CBP document obtained by the
Center for Immigration Studies
included this photo of an Afghan
detained at the Mexico-California
border in December 2021.

U.S. Border Patrol agents near Calexico, Calif., recently detained an Afghan migrant who crossed from Mexico, according to a U.S. Customs and Border Protection activity log document obtained by the Center for Immigration Studies.

“Ahmad Nasiri”, 29, was detained just before Christmas on an “immigration violation”. To get to California, he likely traveled an established air-and-land migration route leading through South America, through Panama’s Darien Gap, and on through Central America and Mexico to our southern border.

The document doesn’t provide much more detail — about whether he is one of many thousands of Islamist terrorist Taliban fighters who now control Afghanistan or if he is fleeing such killers and their draconian Sharia-law-based way of governance. But bringing this one entry to public attention serves as a reminder that there are certainly more such Afghans showing up at the border without U.S. government authorization as a fait accompli, their real names and the side they chose during the war not readily verifiable, if ever.

His discovery in California pointedly demonstrates that any Afghan who can raise the smuggling money has no need for American government permission or a special immigrant visa to enter the United States since they can enter via the totally overwhelmed southern border, claim asylum there, and stay in the country permanently.

It should go without saying that Nasiri and all the other Afghans who should be presumed to have likewise crossed the border before him will claim asylum in an American system utterly unsuited to vet their security risk and that has been geared to pass them all through with far greater ease than those who apply for visas. My book, America’s Covert Border War, dedicates a chapter to this gaping hole in the national security cordon (Chapter 5, “The Asylum Catastrophe”).

That’s really the problem here because, as I have reported, the chance that any given Afghan of military age (Nasiri’s age is given as 29) opposed, fought, or killed American troops for Islamist extremists is pretty good and they may want to continue in that vein once living in the United States. Even Afghans fleeing Taliban persecution, while deserving of sanctuary in a country other than their own, should be questioned for having bypassed at least a dozen other safe countries that offer asylum to get to ours.

But some Afghans who reached the United States, legally by visa and illegally by border crossing, still have succeeded in covering over their extremist proclivities even after vetting because our vetting systems remain fail-prone 20 years after 9/11 reforms.

Take Mujeeb Rahman Saify, a former army translator who in 2009 secured one of the prized special immigrant visas, settled in New Jersey, and now stands accused of smuggling other Afghans over the southern border who couldn’t get the visas. One of those he smuggled into Texas was Wasique Ullah, another former army translator who paid smugglers $16,000 to cross into Texas on January 19, 2018.

According to court records, the U.S. military fired him as a “force protection threat” after discovering that he and relatives worked with a foreign intelligence service “such as the Taliban”. Even so, he stayed in the United States for several years using the legal system to appeal his asylum claim denial.

Historically, not many Afghans crossed the southern border each year before the 2021 fall of Afghanistan. When it happens, it’s almost never made public, so we rarely get to learn of them in real time.

But Nasiri’s crossing into California last month confirms a prognosis I made back during the fall of Kabul in August 2021: that American visa restrictions on the hundreds of thousands who will pour into Afghanistan's neighboring countries will lead to an increase in the number of Afghans who will cross the southern border.

And, as at least half of America well knows, border security has all but collapsed under Joe Biden’s administration policies. Times like these are especially terrible for vetting out bad people who want to infiltrate that border.