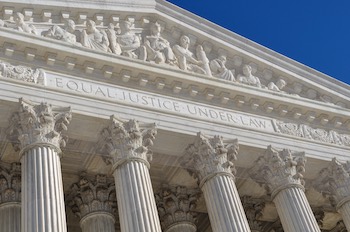 On Monday the Supreme Court issued two brief orders in Trump v. Hawaii and Trump v. Int'l Refugee Assistance. These cases relate to the latest iteration of travel restrictions that the administration has imposed on nationals seeking visas from certain countries, as set forth in the September 24, 2017, Presidential Proclamation Enhancing Vetting Capabilities and Processes for Detecting Attempted Entry Into the United States by Terrorists or Other Public-Safety Threats (EO-3). Those orders are significant for a number of reasons, but their full significance is not entirely clear.

This is the second time that the Supreme Court has issued an order relating to the president's travel restrictions. My analysis of the first order, which limited injunctions on Executive Order 13780, captioned "Executive Order Protecting The Nation From Foreign Terrorist Entry Into The United States" (EO-2), can be found in a June 26, 2017, post. To summarize, the Court essentially narrowed lower court injunctions on specified provisions of EO-2 to "foreign nationals who have a credible claim of a bona fide relationship with a person or entity in the United States."

I discussed the September 4, 2017, proclamation at length in an October 3 post. As I stated that time:

The proclamation appears to be a well[-]reasoned, thoughtful, and narrowly tailored policy prescription intended to protect the national security of the United States. That said, lower federal courts have shown little compunction to insert themselves in national security matters to which they would have deferred to the political branches in the past when those matters involve decisions made by President Trump. Stay tuned for more litigation to come.

Sure enough, such litigation did follow. On October 10, 2017, plaintiffs who had previously challenged earlier travel restrictions in EO-2 in the U.S. District Court for the District of Hawaii, joined by two unnamed "John Does", filed a Motion for Leave to File a Third Amended Complaint with the federal district court judge who originally heard that case, Judge Derrick Watson, to challenge EO-3.

On October 17, 2017, Judge Watson issued a blanket temporary restraining order enjoining the Department of Homeland Security and Department of State "from enforcing or implementing" the sections of EO-3 that restricted the entry into the United States of nationals of Chad, Iran, Libya, Syria, Yemen, and Somalia. That order was based on a statutory analysis of the authorities on which the president relied in issuing EO-3.

In an order dated October 17, 2017, U.S. District Court Judge Theodore Chuang enjoined section two of EO-3 "against those individuals 'who have a credible claim of a bona fide relationship with a person or entity in the United States.'" As he explained:

For individuals, the injunction covers visa applications by individuals with immediate family members, such as parents, children, or siblings, as well as "grandparents, grandchildren, brothers-in-law, sisters-in-law, aunts, uncles, nieces, nephews, and cousins of persons in the United States." ... For organizations, the connection must be "formal, documented, and formed in the ordinary course" rather than for the purposes of evading the Proclamation.

Judge Chuang's order was based in part on his conclusion that provisions in EO-3 violated the Establishment Clause in the Constitution and section 202(a)(1)(A) of the Immigration and Nationality Act (INA).

The Supreme Court's orders will allow the restrictions in EO-3 to proceed pending lower-court action. Those orders are exceptional for two reasons. First, they do not limit the application of EO-3 in the manner that its earlier order limited EO-2, to exclude from its reach foreign nationals with a credible claim of a bona fide relationship with a person or entity in the United States.

Second, the fact that the Court issued those orders pending lower-court action, and the terse language in each, suggests that the justices may not be pleased with the treatment that the president's travel orders have received at the hands of the district and circuit courts. As the editorial board of the Wall Street Journal put it:

This is an important moment for the rule of law. The Supreme Court had already intervened once to rebuke the lower courts over Mr. Trump's initial travel ban, but judges ignored the warning and kept overturning modified versions with injunctions that blocked their implementation even before considering the merits. Yet the executive has considerable latitude on immigration and national security, as the Justices seem to recognize.

I am not quite as ready as the Journal is to read too much into these Court orders. Congress does most of its business in public (and usually when it can, on television), and executive branch communications are generally subject to FOIA (and agency and department heads are subject to grilling by Congress), but the "Third Branch" does most of its work in secret, and rarely discloses (even after the fact) the trade-offs and concerns that go into its decisions.

That said, because of the manner in which these cases have proceeded, the lower courts have gone out on what I believe are some pretty big limbs in their decisions, and have cast significant aspersions on the president in doing so. And Chief Justice Roberts has explained in the past that he has attempted to avoid politics in judicial opinions, an issue that the other courts that have considered the so-called "travel ban" cases do not appear to have been concerned about.

Overtly political judicial opinions undermine the objectivity of the court system as a whole and, from my perspective, many of the immigration cases that have been issued since the inauguration have smacked of politics. And because the Supreme Court sits atop the federal courts, it has the greatest interest in maintaining at least the veneer of judicial objectivity. Again, however, it is possible that the orders in Hawaii and Int'l Refugee Assistance mean only what they say, and are necessarily limited in scope to the time that the district and circuit courts take to complete their work.

If it is attempting in those orders to redirect its inferior-court judges back to cold reasoned analysis and away from fiery rhetoric and overheated analysis, however, the Supreme Court should be commended.