The Migrant Crisis — in Portland, Maine

It’s already struggling with a relative handful of newcomers, and its ability to continue is in doubt 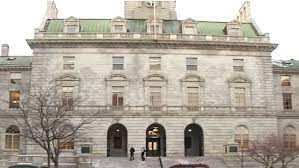 To my surprise, there is a migrant crisis in Maine’s largest city, Portland, and it’s straining local and state coffers — and drawing federal cash, too. The locals are compassionate, but their ability to continue housing and providing for illegal entrants from all over the world who were apprehended by DHS and released at the Southwest border is in serious doubt.

In requesting an additional $24 million (on top of $150 million allocated for FY 2022) for migrants through FEMA’s Emergency Food and Shelter Program (EFSP), DHS explained:

The EFSP provides critical resources to communities providing humanitarian relief to thousands of families and individuals encountered by DHS at our nations southern border. Communities in California, Arizona, New Mexico, and Texas, and as far reaching as Portland, Maine, are providing food, shelter, transportation, COVID-19 testing, and care associated with recommended quarantining and isolation of this population and incurring the cost of this relief.

“California, Arizona, New Mexico, and Texas, and ... Portland, Maine” — one of these things just isn’t like the others. That passage, including the modifier “as far reaching”, suggests that DHS is a little surprised, too. So, what gives?

The Lure of the Pine Tree State. A July 15 article in the Christian Science Monitor offers some clues. It’s a rather lengthy human-interest story that details the threats and dangers foreign nationals face while traversing from far and wide to the Southwest border, which would be a good warning to others if it were presented as such. It’s not.

Rather, the Monitor explains that Portland “has been one of the most benevolent in America toward outsiders”, an attitude that drew 450 African migrants to the city three years ago. It continues:

That success, with some irony, helped bring the current wave from Africa. In the cellphone age, immigrants and refugees plumb the internet and contact earlier migrants through WhatsApp. If they make it across the U.S. border, many ask to go to Portland because they’ve heard other Africans are there.

It has been a constant in American history for aliens to go to communities where their friends, family, and countrymen have already resettled, which is why there are so many who identify as “Pennsylvania Dutch”, why Minnesota’s football team is called the “Vikings”, and why in January Hamtramck, Mich., became the “first known city” in the country “with a government made up entirely of Muslims”.

Mufalo Chitam, executive director of the Maine Immigrant Rights Coalition, explained how this phenomenon is affecting Portland back in May:

People come here, because they know someone, and we've never asked anyone to come to Portland as an organization. But people are connected, because of the service that they’ve received here, because of their families. Some have family roots here, some have just people that they know, speak their language, and their culture.

It’s not just African migrants who are headed to Portland. The main focus of the Monitor piece is a Haitian female who traveled with her husband and son from Chile to Bolivia, Peru, Ecuador, Colombia, through the Darién Gap (where “12 of the 20 in her group were swept away” fording a “fierce river”) to Panama, Costa Rica, Nicaragua, Honduras, Guatemala, and then to Mexico. Nothing suggests that she or her family applied for asylum anywhere else along the way.

As the Monitor explains, migrants “have come to Portland because they heard it had received fellow travelers humanely”. That’s an understatement, as the state struggles to secure housing for all who arrive, including in local hotels.

Portland is reimbursed for 70 percent of those housing costs by the state, while the other 30 percent comes from FEMA — though there are concerns that the federal cash “will go away”.

Portland Struggles with the Migrant Surge. The city’s compassion finally hit a wall in May, when it was providing shelter for 1,771 people — 1,200-plus “asylum seekers” and 500 homeless locals in a series of shelters and hotel rooms spread over a three-county area.

That overflow prompted Kristen Dow, the city’s Health and Human Services director, to send an E-mail to CBP and other immigration officials, FEMA, the office of local U.S. Rep. Chellie Pingree (D), Portland’s city council and mayor, and “community partners” in early May, which read:

I am writing this email to alert you to the fact that as of the date of this email, there is no further shelter OR hotel capacity in Portland, Maine. We have been over capacity in our shelter for quite some time and have now reached the point where the hotels we have been utilizing are also full. . . .

Please know, that as a result of our capacity limitations, if your organization sends a family to Portland, Maine they are no longer guaranteed shelter upon their arrival to our shelter. Additionally, because our staff are spread quite thin, it is not guaranteed that we will be in a position to aid individuals in their search for emergency housing. I ask that you all share this information widely within your organizations and with families you are working with.

Later that month, non-profit developer Avesta Housing announced that it was preparing to relocate some of the 300 migrant families in hotels to 100 new units in Portland and South Portland.

Dana Totman, president and CEO of Avesta, explained that rental costs for those units would be covered by funds in the state budget “allocated for affordable housing for asylum seekers” for a two-year period. “After two years, once asylum seekers have had time to apply for asylum and work authorization, tenants will pay rent.”

That same week, Greg Payne, senior housing advisor to Maine Governor Janet Mills (D), announced the state would be using part of the $22 million in its supplemental budget earmarked for housing assistance to open a “temporary emergency shelter for individuals experiencing homelessness that could house roughly 280 people”, and to “renovate a number of housing units that could help house around 140 asylum-seeking families, totaling around 400 people”.

At that point, there were 65 individuals in Portland’s family shelter, an additional 300-plus families (1,091 individuals) in hotels, and 43 in South Portland’s Eastpoint Christian Church. Despite that $22 million allocation, advocates were calling on the state to do more.

In late June — with some 400 migrant families in hotels — it was reported that the Greater Portland Council of Governments would be raising $1.5 million to build 200 transitional units for migrant families over the next two years. That effort “will also rely on grants and financing from real estate developers”.

What Happens Next? Local advocates assert that there is a local labor shortage, which the newly arrived migrants will help to alleviate. Reza Jalali, executive director of the Greater Portland Immigrant Welcome Center, contends that the arrivals “are educated, they're motivated, they're young, they're willing to work”.

I will take him at his word, but the Monitor notes that “most” of those migrants “speak no English; they have no money, no relatives or friends to house them; and they are not allowed to work for a living as their appeals for asylum slowly crawl through the system”. Nothing guarantees that they will not depart for warmer climes when and if their language skills improve and they are allowed to work.

I will also note that in an otherwise glowing May 2019 article, the Washington Post reported that four years after then-Chancellor Angela Merkel had allowed some 1.5 million “asylum seekers” into Germany in 2015, “a significant majority ... remain[ed] out of the labor force”, including nearly 200,000 who were “registered as unemployed”.

In August 2020, German media company Deutsche Welle reported that only half of those who had arrived in the country since 2013 had “paid employment”, following an upward trend that had been impacted by the Covid-19 pandemic.

That country received a massive number of migrants in a short period. Things are different under the Biden administration’s immigration policies. While a smaller number of migrants has been released into the United States (1.129 million from the time Biden took office to the end of June), the surge over the Southwest border shows no signs of abating.

If anything, it will get worse. DHS estimates that when CDC orders directing the expulsion of illegal migrants issued pursuant to Title 42 of the U.S. Code in response to the pandemic are lifted, up to 18,000 illegal entrants per day will cross the border — 540,000 per month, or 6.57 million per year.

The unemployment rate in Maine is low — 2.8 percent, compared to 3.5 percent nationally in July. The Federal Reserve is hiking interest rates to curb inflation (currently running at an 8.5 percent annual rate), but it’s questionable whether the Fed will be able to outrun increased government spending.

Part — not much compared to the president’s $10,000 student-loan forgiveness with its $469 billion minimum price tag, but part — of that increased government spending is on transportation, housing, and provision for those new migrants.

Fed Chair Jerome Powell has warned that those interest-rate hikes will lead to additional joblessness. Even without new migrants, Maine may not have a labor shortage for long. That 3.5 percent national unemployment rate I mentioned in July now stands at 3.7 percent, but the state’s numbers have not been released.

Compared to the country as a whole, Portland is dealing with a relative handful of newly arrived migrants and struggling to do so. The city’s altruism and compassion are admirable, but whether it can keep it up is questionable at best, and unlikely at worst.