ICE Detention and Removal Numbers Slip in the Wake of Pandemic

Some good news, though, but still a lot of bad. Will it get better?

ICE Enforcement Removal Operations (ERO) statistics for FY 2020 have been released. Not surprisingly – given the pandemic and its associated restrictions – total removals and the number of aliens removed from the interior of the United States, as well as the number of aliens in ICE detention, are all down compared to FY 2019. There were increases in removals, however, in some surprising subgroups. The big question, though, is whether there will be a rebound in immigration enforcement once the pandemic emergency is over.

A 30.5 percent decrease in removals, only 8 percent were non-criminal 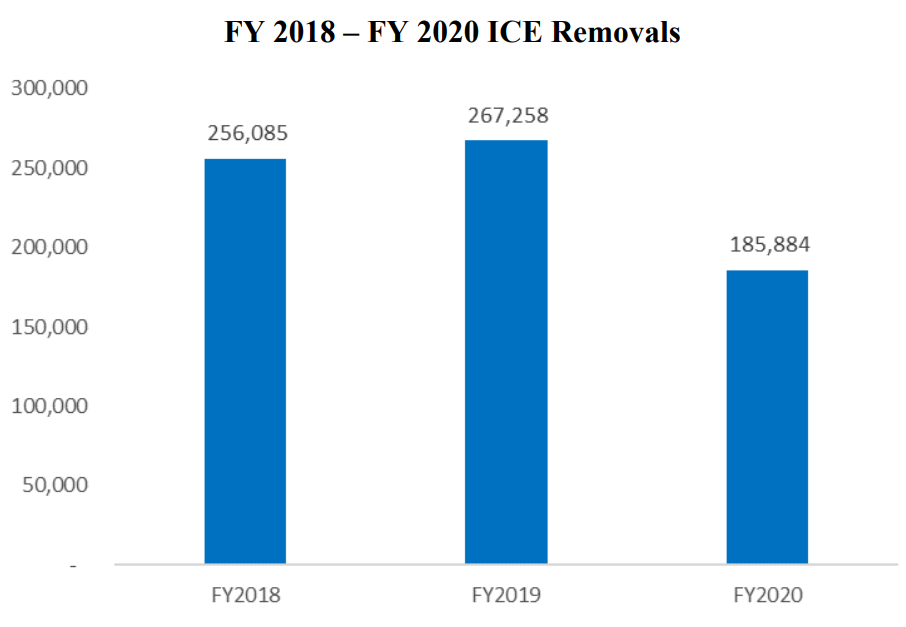 Of those FY 2020 removals, 62,739 were from the interior of the United States (the rest came from port and border encounters by CBP). Of that number, 48,606 (77.4 percent) had criminal convictions, and 9,171 (14.6 percent) had pending criminal charges, meaning that 92 percent of all aliens ICE removed from the interior had some sort of criminal record. Just 4,962 of the total interior removals were non-criminal aliens removable on immigration-related grounds. 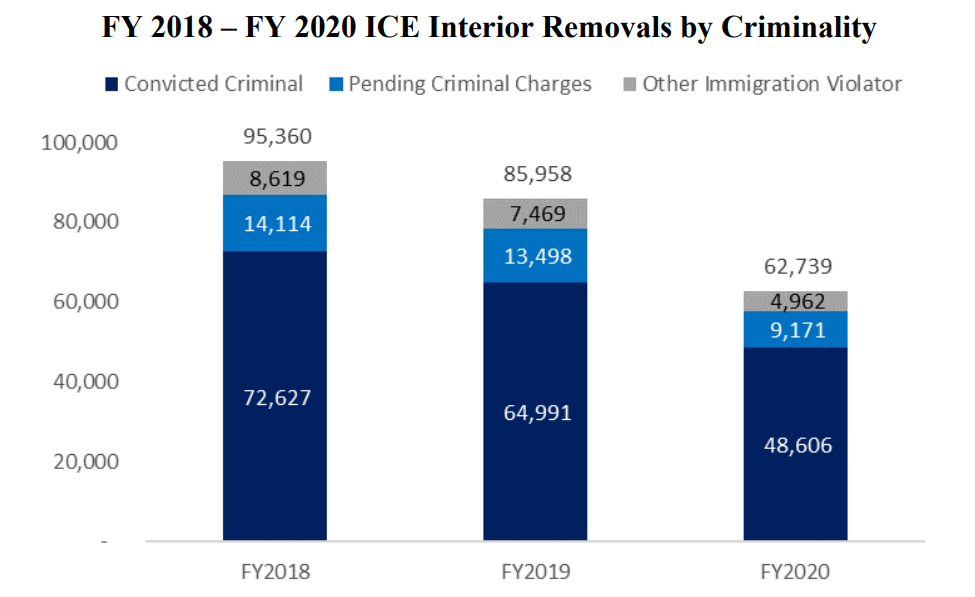 Worse, from an enforcement standpoint, these numbers represent a two-year decline in removals. In FY 2018, ICE ERO removed 95,360 aliens from the interior, 72,627 of whom had convictions (76.2 percent), 14,114 of whom had pending criminal charges (14.8 percent), and 8,619 of whom were non-criminal immigration violators (nine percent).

The numbers are particularly dismal given the fact that there are (by conservative estimates) more than 10 million aliens illegally present in the United States, 3,262,680 of whom are on ICE’s non-detained docket. That docket includes aliens in removal proceedings, as well as aliens who have received orders of removal but have not yet been removed.

Well, due to border closures and the CDC’s use of its Title 42 authority to expel aliens who have entered illegally or without proper documents, CBP immigration book-ins (when aliens first enter ICE detention, and usually the bulk of DHS’s ultimate immigration docket) are down. In FY 2019, ICE booked-in 373,770 aliens who had been apprehended at the border and ports by CBP, compared to 137,084 aliens booked-in by ICE. In FY 2020, by contrast, ICE’s own book-ins (99,774) actually exceeded CBP’s (83,095).

ICE ERO arrests were down 38 percent, only 10 percent were non-criminal 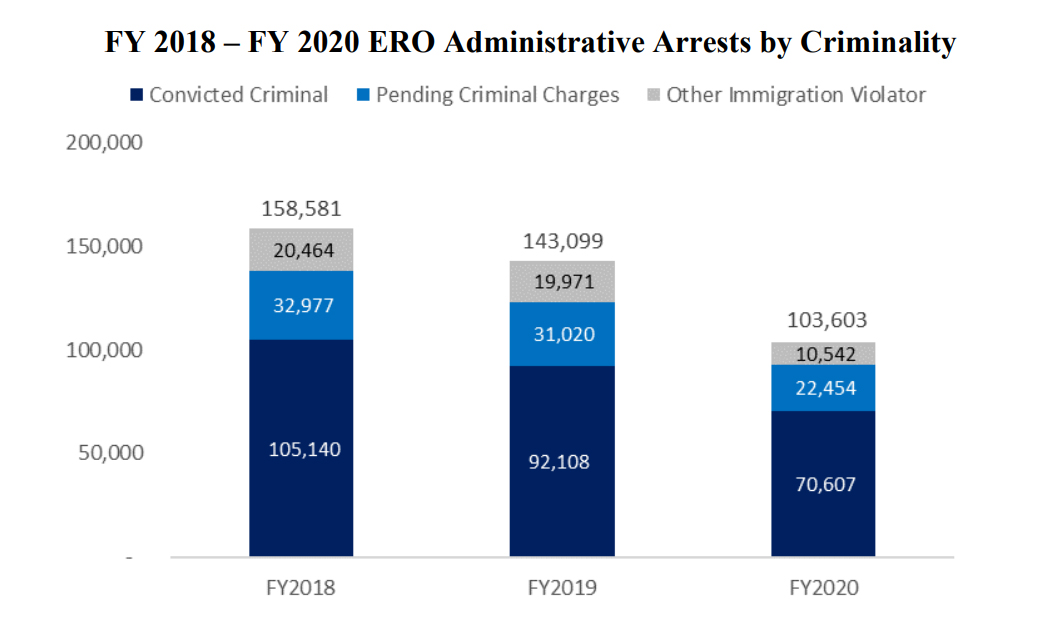 Pandemic blamed for decreases in arrests and removals

The agency blames the pandemic for the decreases in both arrests in and removals from the interior. Of course, not only were ICE’s operations curtailed at the outset of the pandemic in late March to April (when the agency shifted its focus to aliens who posed a safety risk and those subject to mandatory detention), but local and state law-enforcement efforts were, as well. When 92 percent of all of your removals are criminals, and most crimes occur at the state and local level, there are going to be fewer ICE arrests and removals when states and municipalities are curtailing their activities.

The agency does not say as much (it concedes that its arrests “slowed sharply for several months during the spring and summer”), but other data suggests that this is the case. Specifically, the number of detainers that were issued by ICE ERO dropped from 165,487 in FY 2019 to 122,233 in FY 2020 – a 26-percent decrease. Fewer state and local arrests mean fewer detainers, all other things being equal.

That said, ICE is issuing detainers for some serious criminals. Aliens for whom detainers were issued had convictions or pending charges for 1,900 homicide-related offenses, the same number of kidnappings, 3,600 robberies, 42,800 assaults, and 11,900 sex crimes.

As for removals, ICE ERO curtailed its efforts at the start of the pandemic, efforts subsequently hampered by safety precautions to protect its staff, contractors, and the aliens themselves, as well as by restrictions on air travel and a reluctance on the part of certain countries to take their nationals back in the midst of early lockdowns.

Several “previously non-cooperative” countries took back more of their nationals 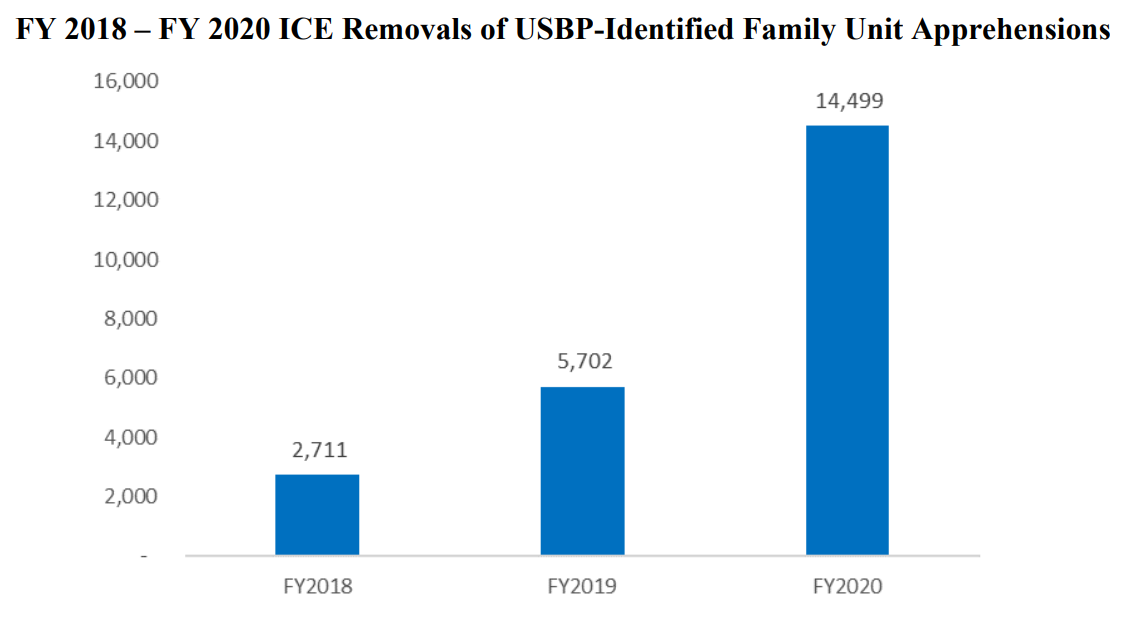 The agency credits the increase largely to the Electronic Nationality Verification (ENV) Program, rolled out in July 2019. ENV, in which El Salvador, Guatemala, and Honduras (source countries for the majority of FMU in recent years) participate, allows ICE to verify nationality from the trio electronically, as opposed to through consular verification. This, in turn, limits the amount of time that nationals of those countries spend in detention awaiting removal.

That said there are two caveats. One, 13,000 of those removals occurred before pandemic lockdowns began in late March and April. Two, from FY 2018 to FY 2020, 601,534 FMU were apprehended by the Border Patrol (there were large numbers of FMU in previous years, as well), so while the numbers of FMU removals have increased, they are still low compared to the FMU population as a whole.

While on the subject of FMU, the rate at which aliens in that cohort who were on so-called “alternatives to detention” (ATD, such as ankle bracelets) absconded shot up, year-to-year, from 26.9 percent to 39 percent – almost four in ten. This outpaced the increase in the number of single adults who absconded while on ATD (12.3 percent in FY 2019 versus 21 percent in FY 2020).

The overall absconder rate in FY 2020 was about one-third of all ATD participants, which ICE notes (in an understated manner) “demonstrat[es] the growing challenges that large numbers of ATD enrollments create for immigration enforcement.”

The agency contends that given ERO’s limited resources (about 5,300 ERO officers in 24 field offices) compared to the non-detained docket that office is assigned to track, its ability to keep tabs on aliens on ATD is “extremely limited”. This simply reinforces the Center’s conclusion in January 2019 that “Alternative Programs Don’t Eliminate the Need for Immigration Detention”.

Ultimately, because ICE ERO lacks sufficient resources to keep all current [ATD] participants enrolled through the pendency of their removal proceedings, or to locate and arrest the significant number of participants who abscond, current problems with the ATD program will only be exacerbated by enrolling greater numbers of participants without the addition of appropriate case management and enforcement resources.

That is likely a warning to the incoming administration. President-elect presumptive Joe Biden is unlikely to heed it, however, as he stated on his campaign website that he favors ATD (and “non-profit case management programs”) to what he deems “prolonged detention”.

Of course, he also asserted: “Evidence shows that these programs are highly effective and are far less expensive and punitive than detaining families.” ICE’s evidence, however, does not reflect that effectiveness, and immigration detention by definition is not punitive.

There were two reasons for the decrease, both pandemic-related: a decline in the number of aliens apprehended (as opposed to expelled under Title 42) by Border Patrol; and the need to limit immigration detention to mitigate the spread of the Wuhan coronavirus in detention facilities.

Nor does the decrease in year-to-year ATD tell the whole story. By the end of FY 2020, ICE ERO’s detained population was just 19,068 – 63 percent lower than it had been at the end of FY 2019. Almost all of those aliens were subject to mandatory detention or had criminal records. Again, ICE warns:

Because COVID-19 has severely impacted the global economy, once pandemic conditions begin to resolve within the United States, ICE anticipates that migration may meet or surpass pre-pandemic levels, and the agency will require adequate resources to address such a shift. 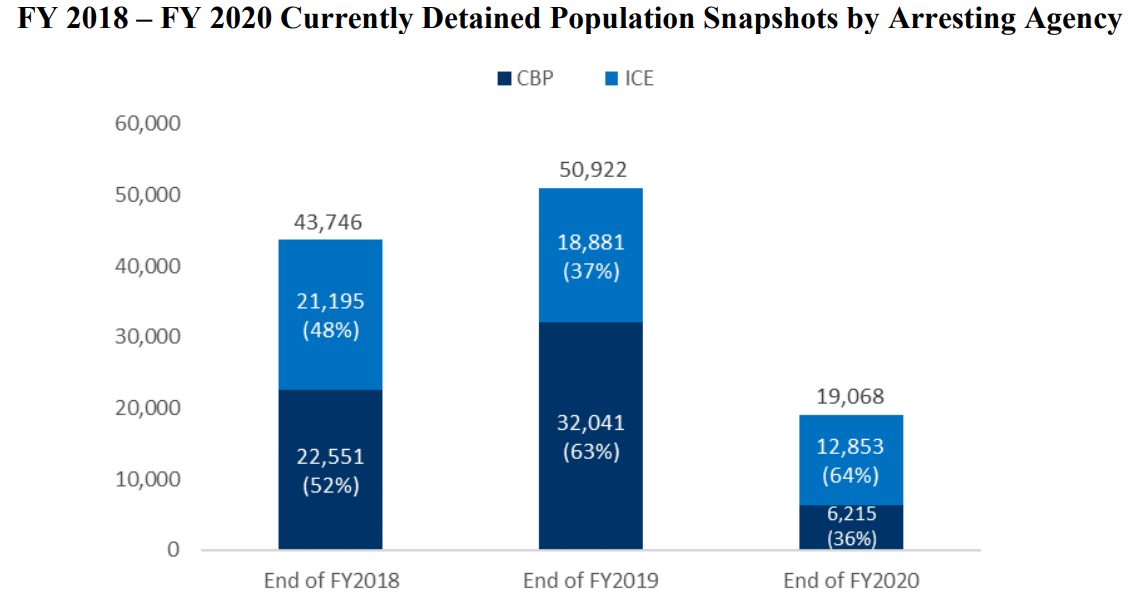 ICE enforcement under a Biden administration

As I noted last Wednesday, the former vice president has backtracked on some of his border policies out of concerns of such a flood of migrants at the border. Whether Biden heeds this warning with respect to detention, however, remains to be seen.

But, long story short, ICE detentions and removals are down in FY 2020. A big reason is the pandemic, but with vaccines in production, the end of the pandemic is (I hope) not too far off. Whether ICE enforcement rebounds at that point will soon be in the hands of a new administration, with very different ideas on the subject than the current one. But, sometimes events on the ground can drive policy in a very different direction.