Unaccompanied children doubled from February, while families increased by 174 percent

CBP today released its figures on the number of migrants apprehended along the Southwest border in March. Border Patrol apprehensions of 168,195 migrants were at a 20-year high (last exceeded, barely, in March 2001), made worse by high recidivism rates and the apprehension of large numbers of children travelling alone (unaccompanied alien children or UACs) and adults travelling with children (family units or FMUs). 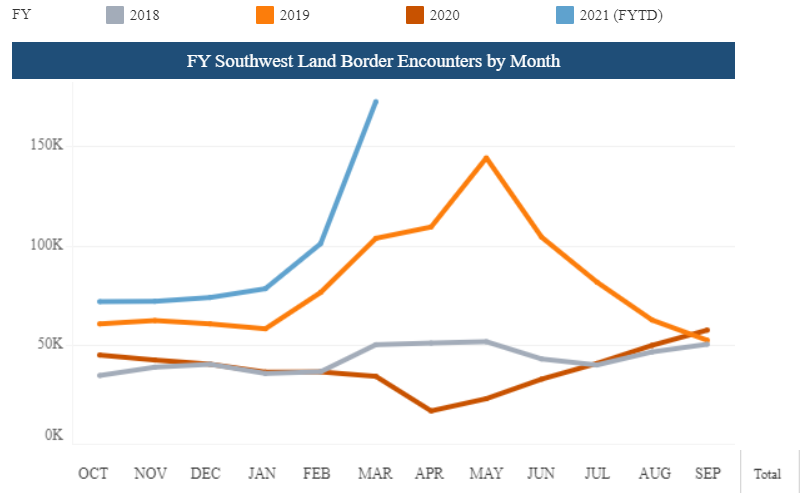 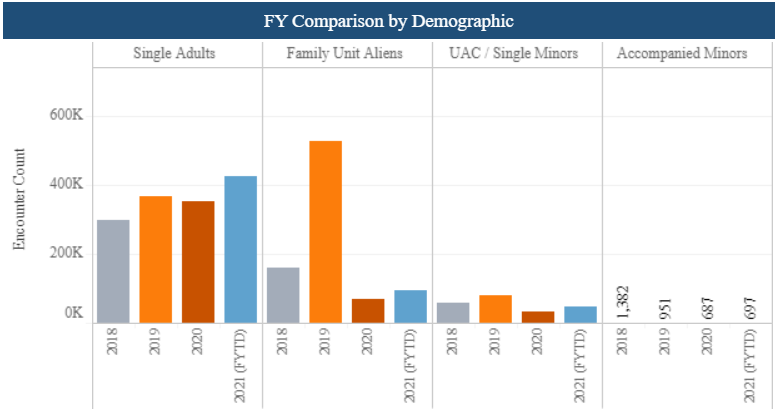 In March, Border Patrol apprehended 96,628 single adult migrants, up 40 percent from 68,992 in February. Many of those aliens were likely "recidivists", that is migrants who were apprehended illegally after having been previously expelled or removed.

Traditionally, and up to FY 2011, most migrants who were apprehended were adult Mexican nationals. Once apprehended, they were either quickly deported though expedited removal, or were simply allowed to go back across the border under a process known as "voluntary return".

Note that most of those migrants did not want to be caught in order to claim asylum – they wanted to evade detection to get into the interior of the United States to live and work here. In my experience, Border Patrol would usually get tired of seeing them after a certain point, and would refer them for criminal prosecution or detain them for removal proceedings.

If they were prosecuted once for illegal entry (a misdemeanor for a first offense) those migrants could be facing serious jail time (two years) if they did it again. Similarly, if they were deported and reentered, they could be prosecuted and receive up to two years (or more) in jail. That sends a message.

Migrants who are not Mexican nationals could not be returned quickly back across the border, so as their numbers grew in the 2010s, the recidivism numbers dropped. Border Patrol published numbers on the percentage of migrants apprehended who were recidivists, but those numbers stop in FY 2019, when the rate was seven percent. Stopped publishing likely with good reason.

As I have explained previously, in response to the pandemic beginning in March 2020, the director of the Centers for Disease Control (CDC) issued orders under Title 42 of the U.S. Code, directing that migrants who entered illegally be quickly expelled, usually back across the border-- regardless of whether they were Mexican nationals or not.

That apparently boosted the number of recidivists, as again, migrants who had been expelled sought to reenter. In its January 2021 Operational Update, CBP reported that between March 20, 2020 (when President Trump announced the Title 42 expulsion policy) and early February, 38 percent of all CBP encounters at the Southwest border "involved recidivism".

The agency did not, however, quantify how many recidivists were single adults, migrants in family units, or unaccompanied children. In March, Border Patrol expelled 101,897 migrants under Title 42 (60.5 percent of total apprehensions), and for reasons that I will explain below, most of them were likely single adults.

Recidivism boosts the number of migrants whom the Border Patrol has to apprehend, and makes doing so more difficult, because recidivists generally seek to evade apprehension to avoid detention and/or prosecution. This, in turn, would partially explain why migrant deaths and Border Patrol search and rescue numbers (which increased by 681 in March to 4,680) are on the rise.

Border Patrol apprehended 18,663 unaccompanied children in March. That more than doubles February's already astounding 9,271 apprehensions, and is 62 percent greater than the previous monthly high of 11,475 in the dismal May of 2019.

Under Biden administration policy, none of those UACs is subject to expulsion back home under Title 42.

As I have discussed numerous times in the past, UACs present unique challenges, because by law (if they are not from Mexico or Canada), CBP is required to send them to the Department of Health and Human Services (HHS) within 72 hours for placement in shelters for which HHS contracts in the United States.

The problem is that HHS has only limited shelter space, and is running out of room.

Biden has blamed Trump for not maintaining beds for UACs (presumably from the FY 2019 migrant crisis), but it would have made little sense for the government to have maintained facilities it no longer needed: UAC apprehensions dropped almost 91 percent from that May 2019 figure of 11,475 to 1,054 in 712 in April 2020.

The problem, in other words, is not the space per se, but the flood of UACs. On April 1, ProPublica reported that "new 'emergency' facilities skirt safety standards, while facilities accused of abuse are still getting grants". And, as Texas Gov. Greg Abbott tweeted on March 30:

Twice as many children are in Border Patrol custody under Biden than Trump peak in 2019.

Many of them may be held longer than federal law allows.

The Biden Admin. is unprepared for the crises they have caused.

In real numbers, PolitiFact (hardly a pro-Trump outlet) reported that as of March 29, there were 5,160 UACs in Border Patrol custody, just short of twice the number at the peak under Trump (2,600 in June 2019). As I explained back then, Congress's failure to act was the reason why kids were still in Border Patrol custody that month. I have no idea what Biden's excuse is.

Border Patrol facilities were built for adults, not children, and were never meant to house anyone very long. Feeding, housing, and caring for those children means that Border Patrol agents are unable to be "on the line", apprehending drugs, smugglers, and traffickers. They are headed to a city near you, soon.

Perhaps the most alarming figure relates to family migrants, of whom 52,904 were apprehended by Border Patrol, up from 19,286 in February—a more than 174 percent increase.

Way, way back on March 16, DHS Secretary Alejandro Mayorkas asserted: "Families apprehended at the southwest border are . . . currently being expelled under the CDC's Title 42 authority."

While he noted that families from Mexico, El Salvador, Guatemala, and Honduras were being "expelled to Mexico unless Mexico does not have the capacity to receive the families" (emphasis added, a rather major caveat), nationals of other countries were being "expelled by plane to their countries of origin", unless "a family member has an acute vulnerability".

I am not sure why, exactly, those with "acute vulnerabilities" would have been exceptions, because by definition, "acute" conditions "require urgent or short-term care, and get better once they are treated". So, they should have been treated and expelled.

That said, however, reporting by my colleague Todd Bensman suggests that there are more than a few migrants who are not Mexican, Salvadoran, Guatemalan, or Honduran who are being released into the United States instead of being expelled.

As for those who are nationals of one of the listed countries, the Washington Post reported on March 28 that only about 10 to 20 percent of families are being returned to Mexico; the rest are "typically" being released into the United States with nothing more than a Notice to Appear (NTA, the charging document in removal proceedings).

If that scenario sounds familiar, it is because such releases also occurred in the migrant "crisis" of 2019. And, as a bipartisan panel report that year concluded, releases of FMUs with just an NTA were "[b]y far, the major 'pull factor'" that was encouraging even more adults to undertake the dangerous trek to this country with children.

That means that today's crisis will become tomorrow's humanitarian and national-security disaster.

Those families present their own challenges to the government in general, CBP in particular, and Border Patrol especially.

The Post article quoted a former Border Patrol Sector chief, who explained that "about 40 percent of those taken into CBP custody now are children and families, but they consume 60 to 70 percent of agents' time, attention and paperwork." Again, that is time agents are not spending policing the border.

ICE has plans to expand its detention space for families to 3,700 beds, but don't expect migrants to remain there long. As the Post explains: "ICE plans to release the families from the hotels within 72 hours, after providing them health screenings, a coronavirus test and access to clothing, meals, snacks and unlimited phone calls."

If you are wondering why, as I explained on March 23, "Taxpayers [Are] to Spend $392.69 per Person per Night on Hotels for Illegal Border-Crossers", now you know where your money is going. The tab is likely to increase, so leave a credit card on file with Uncle Sam.

As the foregoing shows, the numbers of migrants apprehended at the border is on the upswing, and will get worse before it gets better—assuming it ever does. March is the beginning of travel season for illegal migrants at the border (as a completely different Post opinion piece showed), but don't expect a peak anytime soon.

That's because conditions at the border—and the Biden administration's ill-advised responses to them—will only encourage even greater numbers of illegal migrants. And, Title 42 expulsions will only last as long as the pandemic does, meaning that the single adult migrants who currently are being sent to Mexico will, at some point, no longer be so easy to expel.