Mayorkas is Wrong: There's a Crisis at the Border and Trump Policies Were the Opposite of 'Cruelty'

The problem isn't unfixable factors abroad — it's bad laws in the United States. 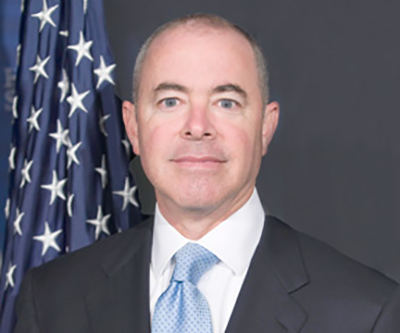 At a March 1 press conference, DHS Secretary Alejandro Mayorkas stated: "We are ... working ... to replace the cruelty of the past administration with an orderly, humane, and safe immigration process." He was referring to Trump border policies, but he begged a major question: Was there such "cruelty" under Trump? The answer's "no", but the secretary's assertion reveals a bigger problem: If you don't admit the real reasons for illegal migration, you can't stop it.

A few initial points. Mayorkas contended that Trump "dismantled our nation's immigration system in its entirety". That is so demonstrably false as to be ludicrous. In FY 2019, more than 840,000 new citizens were naturalized — the highest number in a decade. Naturalizations are the "gold standard" for judging immigration performance, because it is the culmination of the immigration process.

The final numbers for FY 2020 are not yet available, but they will be lower. That is because of the pandemic, however, not for want of trying.

Here's the thing: Mayorkas knows all this, because he (1) is the DHS secretary; and (2) was the director of USCIS (which approves applications for lawful permanent status and naturalization) from April 2009 until 2013.

In FY 2011, fewer than 700,000 aliens naturalized and just over 1.062 million aliens got green cards. That means USCIS issued about 3 percent more green cards that year, but naturalized about 18 percent fewer aliens on Mayorkas's watch than it did under Trump on Francis Cissna's and Ken Cuccinelli's watch.

Unless Mayorkas is damning his own performance (he's not), he's just wrong, and knows it.

But, of course, notwithstanding his sweeping statement, he is really just talking about the border. He's wrong there, too, but before I explain that, let me tell you why he is making these statements.

The administration is in a fix, as I explained in a February 28 post. Biden wants a sweeping amnesty, but a surge of aliens entering illegally that creates another humanitarian and national-security disaster on the scale of (or worse than) that which occurred in FY 2019 would doom the prospects of that plan.

Biden's own actions have set that disaster in motion by removing many restrictions that were placed on illegal entry by the Trump administration, including the Migrant Protection Protocols (MPP, or "Remain in Mexico").

Under MPP, aliens who weren't from Mexico (OTMs) and who claimed a fear of return in their home countries after apprehension were sent back to Mexico to await their court hearings. Some 68,000 migrants were returned under MPP by the Trump administration, and that program reduced incentives for illegal entry.

In May 2019, almost 139,000 aliens were apprehended by Border Patrol after entering illegally, mostly adults travelling with children ("family units" or FMU). By January 2020, when I went to observe MPP hearings in Texas, that number had plummeted to 29,205 (almost all of whom were single adults).

On February 11, the Biden administration announced that it would begin allowing the 25,000 or so aliens who were still in Mexico under MPP into the United States.

Biden's rhetoric (both pre- and post-inauguration) has also contributed to the recent surge of migrants at the Southwest border, a phenomenon my colleague Todd Bensman referred to as the "Biden effect". That is why Mayorkas has denied that there is a "crisis" at the border, and requested patience from would-be illegal entrants.

Of course, there is a crisis at the border — that's why the Biden administration reopened an HHS shelter for unaccompanied alien children (UAC) that had been shuttered under the Trump administration when it was no longer needed.

That crisis is compounded by pandemic restrictions on other HHS shelter space, but the Trump administration managed to handle that just fine — after it implemented restrictions at the border.

Mayorkas also complained that the Trump administration had "tor[n] down the Central American Minors program (CAM)", which was implemented under the Obama administration.

As my colleague Nayla Rush explained, CAM "was initially set up to provide certain minors (later expanded to include adults) in El Salvador, Guatemala, and Honduras the opportunity to be considered, while still in their home country, for refugee resettlement in the United States."

That's not terribly unreasonable (except refugee resettlement is an international — not unilateral, responsibility). As Rush noted, however: "Individuals found ineligible for refugee status were considered for the possibility of entering the United States under parole."

There is no support in or precedent under our immigration laws for such parole and resettlement, and thus no wonder the Trump administration "tore [it] down". Biden wants to "build it back up again".

The Biden administration also proposes to stem the tide of migrants by sending $4 billion in taxpayer cash to El Salvador, Guatemala, and Honduras "to reduce the endemic corruption, violence, and poverty that causes people to flee their home countries."

I can save all 330 million Americans $12 a piece by telling you now it won't work. Why not? Three reasons.

One, "endemic corruption, violence, and poverty" are just that — "endemic".

Reversing those ills would require institutional change. The United States has been involved in Latin America since at least 1846, and while it has successfully promoted democracy throughout much of the region (to one degree or another), it would take decades to make a dent in the corruption and poverty.

Two, there is no way to give money to corrupt governments and ensure that it's not wasted by kleptocrats. That is the definition of "corruption".

Three, the United States has difficulty dealing with violence and poverty as home. The 1964 "war on poverty" cost at least $800 billion by 2012, with little to show for it ("poverty won", as Reagan noted).

If the federal government can't address violence 34 miles from the Capitol, how is it going to stop it thousands of miles away in a foreign country?

None of this is really necessary, and Mayorkas knows it. The "root causes" of illegal migration are closer to home, and much cheaper to fix.

Three loopholes in the law are the main drivers of illegal immigration, as I explained in May 2018: The credible fear process (by which aliens apprehended at the border can seek entry into the United States by asserting a fear of return); the Trafficking Victims Protection Reauthorization Act of 2008 (TVPRA); and a 2015 judicial interpretation of the 1997 Flores settlement agreement (FSA).

Credible Fear. DOJ reports that of aliens who claimed fear a fear of return after they were apprehended at the border between FY 2008 and the fourth quarter of FY 2019, 83 percent were found to have a "credible fear" and placed into removal proceedings in the United States.

Of those, however, 32.5 percent were ordered removed in absentia when they failed to appear in court, and fewer than 17 percent were granted asylum. Those statistics reveal that aliens without asylum claims have gamed the credible fear system to enter, work, and remain in the United States.

TVPRA. Under that act, OTM UACs are to be quickly transferred from DHS to HHS custody for placement in shelters and ultimately with "sponsors" in the United States — even if they have not been trafficked and have no asylum claims. And the vast majority of sponsors — 78.7 percent during one six-month period — are themselves here illegally.

If you were an alien unlawfully present with kids back home, or a foreign national with family in the United States seeking better opportunities for your children, why wouldn't you pay a smuggler to bring them to the United States, when HHS will take them in from the border and deliver them for you?

FSA. Under that 2015 decision, the FSA — which originally applied to the conditions of detention and release of UACs in INS/DHS custody — was deemed to apply to children in FMUs, and require their release from custody in 20 days. To avoid "family separation", their parents are almost always released as well. That encourages adults to use children as pawns to gain release in the United States.

Credible fear, TVPRA, and in particular the 2015 interpretation of the FSA create a "perfect storm" for illegal migration. Border Patrol lacks the facilities to detain aliens (and in particular alien children) for long. Those facilities were built in the 1980s and 1990s, when most migrants were single adults (which 90 percent were, until 2011).

OTM FMUs, in particular, take much longer (78.5 hours) for CBP to process than Mexican nationals (eight hours). Before 2011, 90 percent of all illegal migrants were Mexicans. By FY 2019, only 35.4 percent of illegal entrants were single adults, and fewer than 20 percent were from Mexico.

Caring for those FMUs and UACs overwhelms Border Patrol resources and, consequently, agents often end up having to release FMUs with just a Notice to Appear (NTA, the charging document in removal proceedings) and a court date. That is what is happening at places along the border, today.

An April 2019 bipartisan panel report explained that "[b]y far, the major 'pull factor'" encouraging FMUs to enter the United States illegally was the "practice of releasing with a NTA most illegal migrants who bring a child with them". In FY 2019, 55.6 percent of all aliens apprehended by Border Patrol at the Southwest border were FMUs.

That panel called on Congress to address the problem by fixing the TVPRA and the Flores decision. Congress did nothing of the sort, so the Trump administration imposed restrictions (including the MPP) on the entry of illegal migrants to address the issue.

Its actions were the opposite of "cruel". Why do I say that?

Because that panel explained migrants risk significant harm on the trip to the United States. Similarly, Doctors Without Borders reported in 2017 that more than two-thirds of migrants it surveyed were victims of violence during that trek, and almost a third of female migrants had been sexually abused. The panel concluded that the children in particular "are at great risk for multiple medical problems" and significantly traumatized by the journey.

In March 2019, Mayorkas's predecessor as DHS secretary, Kirstjen Nielsen, referenced the danger to migrants in reporting that the border was at a "breaking point". She was not the first. The Obama administration reported on the harm to migrants travelling to the United States to enter illegally in August 2014 — when Mayorkas was deputy DHS secretary.

Simply put, the Trump administration imposed restrictions to prevent that harm, and free Border Patrol from its childcare duties to allow it to perform its regular job of stopping migrants, drugs, and contraband from entering the United States. Preventing such harm is the opposite of cruelty.

Mayorkas knows everything I have just said. How do I know that?

Among the panelists who wrote that report was Leon Fresco, who was head of the Office of Immigration Litigation under the Obama administration — and thus Mayorkas's immigration lawyer at DOJ. And Fresco appears to know Mayorkas well, asserting recently: "Ali Mayorkas is one of the most humble, gracious public servants you can examine or ever see in the public sector."

Plainly, he and Mayorkas are pals. Maybe Fresco needs to speak bluntly to the DHS secretary.

The fact is that the Trump administration's border restrictions — intended to prevent harm that illegal migrants suffer on their way to the United States — were not cruel. Nor did Trump "dismantle[] our nation's immigration system". But there is a crisis at the border that will become a humanitarian disaster unless the Biden administration and Congress wake up and close the loopholes encouraging illegal migration.