Catch-and-Bus: Thousands of Freed Border-Crossing Immigrants Are Dispersing Across America

Charters and Greyhound are delivering them where they want to go 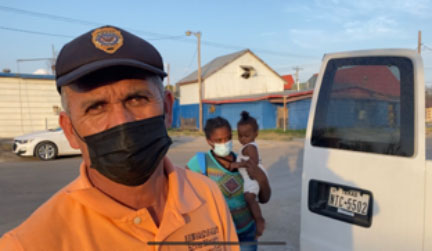 DEL RIO, Texas — On a recent evening with the night ahead looking long, an idling charter bus parked on a lot prepared to disperse a new kind of import throughout the American landscape.

The bus and a small van nearby were packed with 60 or so mostly Haitian families fresh out of the Rio Grande from their illegal crossings.

After testing negative for Covid and other processing, the U.S. Department of Homeland Security had given them legal documents and released them to a local nongovernmental organization, the Val Verde Border Humanitarian Coalition, just blocks from the river in this south Texas border town.

For another day or so, coalition volunteers helped them arrange to wire in money for bus tickets and lodging in the cities to which the buses will take them. Like at least 20 other buses that had each carried 50 people in just the first three weeks of March, this one soon rumbled onto the long road from this Texas border town carrying happy, chattering passengers to new American lives in Orlando, Fort Lauderdale, and West Palm Beach in Florida, as well as Newark, N.J.

“They feel happy because they’re in the United States,” said Lorenzo Ortiz of the El Buen Samaritano Migrante church, who helps coordinate the daily bus rides from Del Rio to where the new immigrants say they want to go. “They want to get as soon as possible to their destination. They’re all going to apply for asylum. They’re all good people.”

A Vast Unseen Conveyor Belt from Border to Interior America

The buses rolling in a steady daily succession out of Del Rio — one charter a day, seven days a week, and before that weeks of filling Greyhound buses — represent a microcosm of a much broader aspect of the unfolding mass-migration crisis at the southern border that has attracted limited media coverage and occurs largely outside public view. Tens of thousands of immigrants caught illegally crossing the border and then released under the new leniency policy of President Joe Biden are now dispersing to four corners of the United States on buses, with some of the more moneyed ones taking passenger jets.

As best as the Center for Immigration Studies can determine from interviews and scattered media reporting, the buses are leaving regularly from Del Rio, the Texas Rio Grande Valley communities, and Laredo, but the busing also appears to be going on in Arizona, as well as in California.

Where are the buses going? They often drop their Haitian, Venezuelan, and Cuban passengers in Florida and New Jersey. Those from Nicaragua and other Central American nations have been delivered to Tennessee, Massachusetts, Indiana, Michigan, North Carolina, Georgia, Kentucky, and to large cities in Texas such as Dallas and Houston.

The population importation by Greyhound and charter buses began in earnest here in Del Rio and from all major crossing points along the southern border shortly after President Biden took office. That is no coincidence, given that the new president’s first moves were to undo his predecessor Donald Trump’s Mexico Covid-protection push-back-to-Mexico policies for minors and family units and to end a deterring deportation machine that had been flying thousands home to Central America. 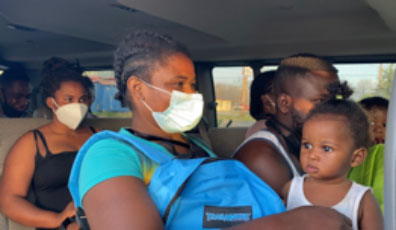 Haitian families on a chartered minibus in Del Rio, Texas, taking them to a local hotel to await a charter bus the next day. Photo by Todd Bensman.

In their place came a policy that, for the sake of descriptive simplicity, might be termed “catch-and-bus”. It appears for now to mainly be limited to families, though not always exclusively.

Catch-and-bus developed when a flood of migrants began crashing over the border in Texas and Arizona in the expectation that the new Biden administration would follow through on campaign promises to let almost all illegal entrants into the country, end most deportations, and provide a path to full citizenship.

Immediately overwhelmed and unwilling to return children with their parents, Biden’s DHS began handing out legal permission slips to pursue more permanent legal status later and put them on outward-bound buses. This practice, in turn, only propelled the crisis because, naturally, its satisfied beneficiaries passed on word of the new catch-and-bus practice on social media networks and calls home. A kind of gold rush began over the frontier that has only gathered volume and intensity by the day.

“Jump to the switch of administrations and we saw an immediate surge of 340,” recalled Tiffany Burrow, operations director of the Val Verde County Border Humanitarian Coalition of one particularly busy day, compared to the norm of about 25 a week. “It’s been a steady climb to where we are 100 or 150 a day now. They’re all going into the U.S.”

The initial spike in apprehensions of families and minors has attracted media attention, but much less so about their numbers, where in the country they are showing up, how they are getting there, and on whose dime. 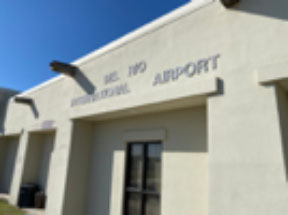 Some with resources take special American Airlines flights out of this town’s small “international” airport, according to Ortiz of El Buen Samaritano Migrante. But buses like the ones in Del Rio carry the vast majority in a non-stop conveyor belt that is transporting a seemingly endless foreign population from their border town spigots throughout the nation’s interior.

U.S. Customs and Border Protection data provides some indication of how many immigrants in family units — at this early stage of the crisis — might have benefited from catch-and-bus. The government has not disclosed the number of those granted the catch-and-bus privilege. But an early bench-marking number can be extrapolated from the CBP data that is public.

Limited reporting suggests that some 87 percent of all immigrants caught in family units during that time were not returned to Mexico, according to an Axios report based on leaked CBP data showing that only 13 percent were returned during one week in March.

If, say, 87 percent are not returned, then the number of illegal entrants bused around the United States during these months would come to about 34,000.

That’s probably just a start. There are strong indications, from data leaked to CIS and from anecdotal interviews on the border, that CBP’s March figures will show a dramatic escalation on a skyward trendline that shows little sign of leveling off so long as word that catch-and-bus is still happening spreads across the globe and inspires many more to exploit it.

Del Rio and its environs offer a representative glimpse into how the process works on the ground, based on recent CIS reporting in the area.

According to Ortiz, Burrow, Border Patrol agents, and several migrants, many turn themselves into Border Patrol voluntarily after their illegal crossings, knowing well the good things that will follow.

They are taken to a Border Patrol processing facility on the outskirts of town, where their fingerprints and identifiers are registered.

In the first months of November, December, January, and February, no one was getting tested for Covid. But after a public outcry, DHS contracted a private company to conduct Covid-19 tests inside the Del Rio area Border Patrol facility. Every immigrant is now tested, Burrow said.

DHS then provides many immigrants with an administrative document titled “Order of Release on Recognizance”, which grants them the legal right to be present inside the United States, according to two such documents that immigrants on the buses agreed to share. These require the immigrants to self-report to a deportation officer in their destination cities by a specific date provided.

One Nicaraguan migrant showed CIS a DHS document titled “Interim Notice Authorizing Parole”, which grants him a renewable one-year term to live legally inside the country.

Most will likely use their time to apply for asylum, a lengthy, back-logged process that allows for work authorization and Social Security cards during an adjudication process that can drag on for years.

In Del Rio, at least, the immigrants are then dropped off at Burrow’s Val Verde Border Humanitarian Coalition. She and her staff of unpaid volunteers help the immigrants contact relatives or friends, figure out how to get bus fare paid or money wired in, and then the transportation part. Organizations like hers operate in other border towns doing the same work.

The immigrants have to pay the entire bus fare, Burrow said, and receive no government assistance for travel. Some arrive with some money. Almost everyone seems to know someone, a relative or friend, willing to wire money or buy bus tickets and incidentals. 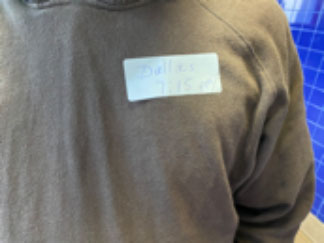 In the hectic early days, the Del Rio group tried to arrange for Greyhound buses to take the immigrants to bigger city bus stations in San Antonio, Dallas, or Houston, where the travelers could transfer to other buses going their way. But there weren’t enough guaranteed bus seats in the local commercial fleets here and in San Antonio, 130 miles away, to meet demand, Ortiz said. So at least in Del Rio, dedicated charter buses were arranged after enough immigrants declared an interest in traveling to a particular region.

In other, bigger border cities, like Laredo and Brownsville, Greyhound buses are still the main option, although recently the company’s CEO rebelled against the practice because the immigrants were not being tested for Covid-19.

Some even in Del Rio still catch Greyhound buses to bigger cities like San Antonio and transfer to other buses going where they want.

In San Antonio’s Greyhound bus station recently, for instance, CIS found several Venezuelans, a Nicaraguan man with two teenaged sons, and several Guatemalan mothers with small children. Some had arrived from Laredo; others from Del Rio. All were waiting for transfer buses to Boston, Tennessee, and Dallas. 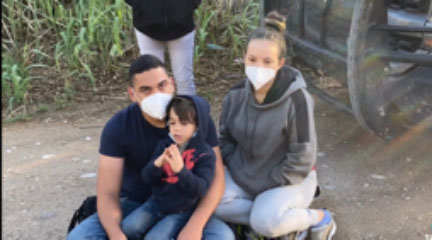 Inside, a volunteer whose name tag identified her as Minerva represented a group called the Interfaith Welcome Coalition. She said the group rotates shifts among the volunteers, because so many immigrants were coming through, making sure they knew which bus to board, at what time, and where. At one point, Minerva wrote “Dallas” on a sticky note and planted it on the shirt of a Nicaraguan who told CIS he had tested negative for Covid three times.

On the bank of the Rio Grande in Del Rio recently, CIS happened across a family of four who had just crossed and turned themselves in to a Border Patrol agent. They were seated on the ground next to his agency truck. Asked where they were from and where they expected to go next, the parents answered that they were from Venezuela and were on their way to join relatives in Florida.

They should be there inside of a week.