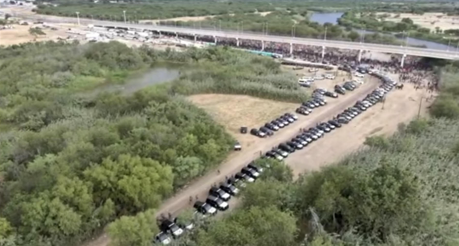 A Southwest border that was already a humanitarian and national security disaster somehow got worse last week, as thousands of Haitian nationals flooded across the Rio Grande toward the Texas town of Del Rio. As I have explained numerous times in the past, those migrants are entering to take advantage of Biden administration policies that, nonsensically, encourage their entry. The bigger issue, though, is that the incompetent response from the president’s team is actually worse than his policies.

In August, Democratic analyst Ruy Teixeira (co-author in 2004 of The Emerging Democratic Majority) discussed what he terms “The Fox News Fallacy”. He explained: “This is the idea that if Fox News (substitute here the conservative bête noire of your choice if you prefer) criticizes the Democrats for X then there must be absolutely nothing to X and the job of Democrats is to assert that loudly and often.”

Teixeira argued that this fallacy “is having a dire effect on many Democrats”, and it’s difficult to disagree with his analysis. That said, to those who are in thrall of it, I will start instead with reporting from Fox’s cable-news rival, CNN.

On September 21, that network ran a photospread on what it terms migrants’ “makeshift camp under [a] Texas bridge” in Del Rio. Thousands of them are lodged in squalid conditions, amidst mud, garbage, and filth there.

Those migrants entered illegally largely in response to the administration’s policies, a point made clear well in advance of this latest border cataclysm by former Border Patrol Chief Rodney Scott in a letter to Senate leadership on September 11.

He explained that senior career professionals at CBP, ICE, and DHS presented the president’s advisors with options to reduce the flow of illegal entrants and “reestablish some semblance of border security”, but those recommendations were “summarily rejected” by what he terms “inexperienced political employees” in the Biden administration.

The current occupant of the Oval Office was free to ditch successful policies of his predecessor that brought about what Scott termed “arguably the most effective border security in” U.S. history — which, as my colleague Rob Law has explained, Biden did shortly after taking office. That’s his presidential right.

His duty as chief executive, however, was to substitute his own policies that would enable DHS to gain operational control of the border, which Biden and his DHS team have thus far failed to do. President Kennedy made this presidential obligation clear when he stated: “For of those to whom much is given much is required.”

Failing that (and Biden has, as the scene at the Del Rio bridge renders pellucid), the least that the administration could have done would have been to prepare for the inevitable onslaught of migrants who would come forward to exploit the void the president created when he reversed Donald Trump’s policies without backfilling them.

Biden and his DHS have failed at that task, and they have continued to fail as the catastrophe in south Texas has unfolded.

Take the one image from CNN’s reporting that actually shows some degree of order. A line of what the outlet terms “[o]fficial vehicles” sit on the bank of the Rio Grande as a stream of migrants proceed from the river.

Either the editor of that piece was uniformed or was coy, because those “official vehicles” don’t belong to the federal government, let alone Border Patrol (whose trucks are instantly recognizable by their distinctive white paintjob with a big green stripe).

My colleague Todd Bensman properly identified them as belonging to the Texas Department of Public Safety, or more specifically the Texas Highway Patrol. If you’ve ever been on a highway in the Lone Star State, you will know them because they are painted black with readily identifiable white hoods (and of course, a light bar at the top).

Why exactly are “highway patrolmen” camped out by the river? Bensman explains they are there to “shut[] down the main river crossing points into the Del Rio migrant camp”. That is not their job though: It’s Border Patrol’s. Except Border Patrol agents are so overwhelmed overseeing a refugee camp on the outskirts of an American town, they can’t do it.

Biden is not on good terms with Texas Governor Greg Abbott (R). They are actively suing each other in federal court on any number of issues. Abbott, however, can’t allow this situation — again created by policies Biden enacted but to which Biden has no response — to fester any longer, though. So he sent in the troopers to do what Border Patrol can’t.

All of this is ground-level logistics, however. Let’s talk political response.

To stem the flow, DHS announced on September 18 that it would start removing those migrants “to Haiti and other destinations in the hemisphere within the next 72 hours”. That, finally, is a logical federal response to the problem: Those migrants are coming because they think they are going to be allowed to stay, and if they are sent back, many fewer will come.

Except, as the AP reported on September 22, Haitians who crossed illegally at Del Rio “have been freed on a ‘very, very large scale’ in recent days.” What message is that going to send, not just to Haitian nationals back home on Hispaniola, but to those currently residing elsewhere?

Of course, it gets worse, as the AP explains that:

Many have been released with notices to appear at an immigration office within 60 days, an outcome that requires less processing time from Border Patrol agents than ordering an appearance in immigration court and points to the speed at which authorities are moving, the official said.

That may sound good, but it’s not, because that statement isn’t actually correct.

What the news wire is describing is not a “notice to appear”, which has real legal consequences (as I explained in July). It’s a “notice to report”, which has no legal effect whatsoever, and which my colleague Mark Krikorian correctly describes as “essentially immigration enforcement by the honor system”.

In that July post, I reported that most aliens released on such notices to report don’t show up, and there is less reason to believe that the latest group will, either. And so even more migrants will follow.

Added to the mix is Vice President and pseudo Border Czar Kamala Harris. Plainly, she will toe the party line and have the president’s back, and Border Patrol’s, too — right?

Well, no. Here was her take on the Haitian migrant situation on September 21:

[W]e really have to do a lot more to recognize that, as a member of the Western Hemisphere, we’ve got to support some very basic needs that the people of Haiti have to get back up and to do what folks naturally want to do, be them from Haiti or in the countries in Central America. People want to stay home. They don't want to leave home. But they leave when they cannot satisfy their basic needs.

To me, that sounds like Harris is justifying those migrants leaving Haiti (or wherever else they have been) and entering the United States illegally, while encouraging more to follow. It’s probably going to translate that way into Kreyòl, too.

The vice president was not simply promoting illegal immigration, however. Which brings me to the horse issue.

The CNN report that I began with shows pictures of Border Patrol agents on horseback pursuing migrants in Del Rio.

Horses have been used by agents patrolling the border since at least 1904, and for a good reason: They are sure-footed animals on rough terrain, which aptly describes most of the border. Border Patrol has about 40 of them, obtained from wild mustang programs run by the Department of the Interior.

They are also heavy animals (mustangs can run up to 800 pounds), and easily spooked, especially if they are slapped or approached quickly. You also never want to run up and grab a horse’s halter. They may just stand their ground when agitated, or they could bite you. I spent a lot of time at Pimlico in my youth, and know you really don’t want to be kicked by one, or have a horse fall on you.

Looking at the pictures from Del Rio, I see in some agents holding reins to control their horses, and in others using those reins to keep migrants away from horses that could bolt or fall. Others, however, see “An outrage at America's border”.

Critics of immigration policy were quick to latch onto those images to claim that agents were abusing migrants. I wasn’t there, and can only tell you what I see, but if I were in the administration I would at a minimum wait until the facts were clear.

Not the vice president, however, who opined: “What I saw depicted, those individuals on horseback treating human beings the way they were was horrible.” Nor White House Press Secretary Jen Psaki (the voice of the president), who while admitting on September 20 that she did not have the full context, asserted: “I don't think anyone seeing that footage would think it's acceptable or appropriate.”

You can add DHS Secretary Alejandro Mayorkas to the pile-on, who stated: “One cannot weaponize a horse to aggressively attack a child. ... That is unacceptable. That is not what our policies and our training require. ... Let me be quite clear: That is not acceptable.” He added: “I am going to let the investigation run its course, but the pictures that I observed troubled me profoundly.”

Perhaps he should have “let the investigation run its course” before he weighed in on his feelings.

I performed congressional oversight of immigration, and the Border Patrol in particular, for more than seven years. There is no way any of my chairmen (five in total) or members (countless) would have stood for agents abusing anybody — citizen, alien, or otherwise — and children least of all.

But neither they nor I were of the “ready, shoot, aim” sort. “Hot takes” are fine, and often unavoidable, but not when you are in charge and are criticizing the very people whom you have sent to do a difficult job in the midst of chaos. To denigrate them off the cuff is not even just inexcusable, it’s incompetent.

The administration is relying on those agents to bring order to the situation, and to use every tool they have to do so. Thanks to the hair-trigger responses from Psaki, Harris, and Mayorkas, every agent on horseback will now be micromanaged by a media largely unaware of the fact (until this week) that there even were mounted Border Patrol agents, let alone how those animals are properly used.

Perhaps White House grandees forgot that they are no longer on the outside throwing stones at the Trump administration for what they deem “moral failings and national shames”, but are now running the show at the border and thus are ultimately responsible for what happens there.

That said, how will any of their statements make the situation in Del Rio any better?

And I have not even gotten into the “multiple” transport buses that migrants have hijacked in Del Rio, or the pilots and ICE agents who were attacked in Port-au-Prince on September 21 when returning migrants to Haiti.

The administration created the conditions that allowed situations like the one in Del Rio to occur in the first place, and it is now compounding the problem with a response that will all-but ensure that this will not be a one-off affair. Bad policies are intolerable but often inevitable in Washington. Incompetence endangering aliens and agents alike, on the other hand, isn’t something the American people will tolerate for long.