Why the Huge Illegal Alien Camp Formed in Del Rio

A surprising explanation from the migrants 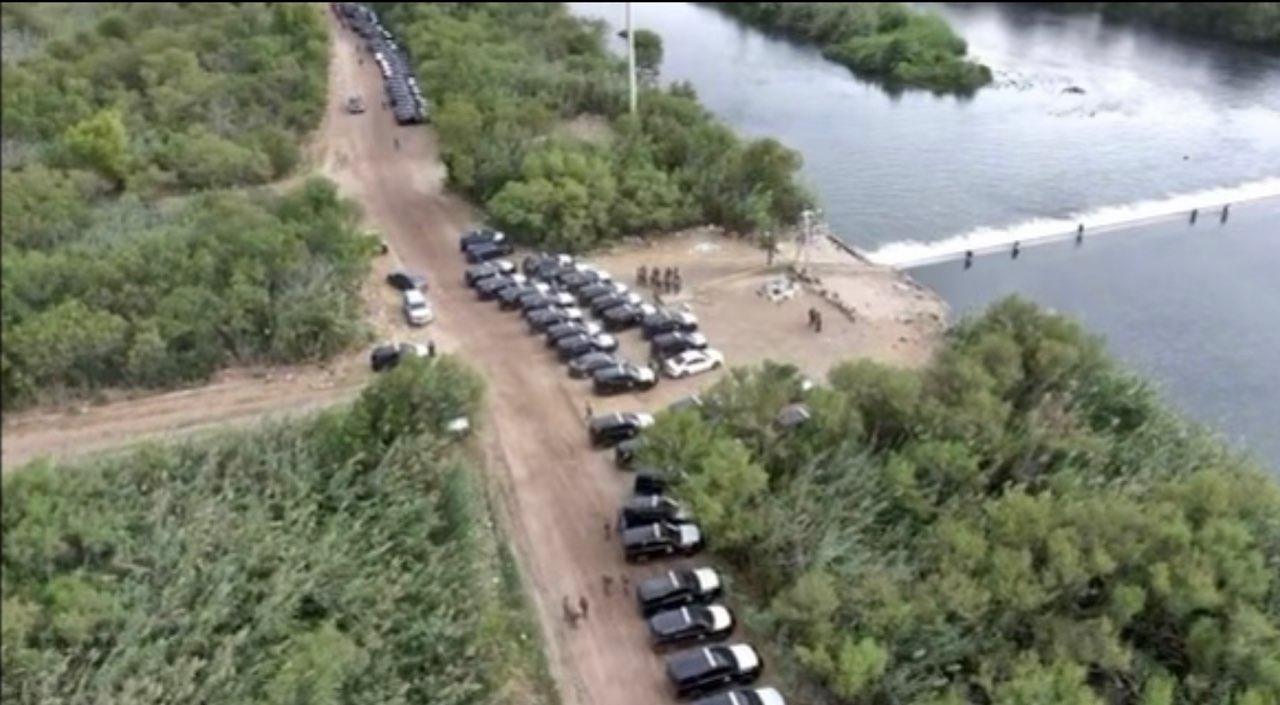 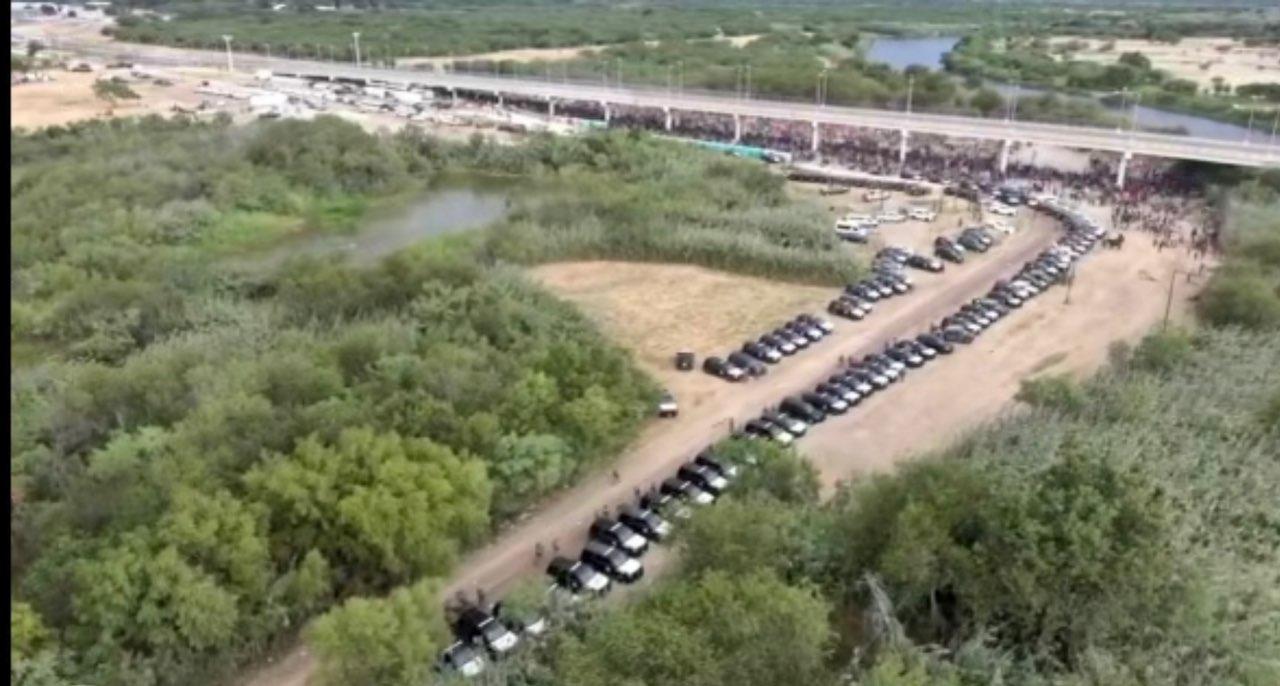 CIUDAD ACUNA, Mexico – Federal homeland security agencies are well into a multi-faceted, expensive operation to quickly reduce the size and dawning political damage of a massive illegal immigrant shantytown that has expanded to 15,000 in a single week in Del Rio, just across the Rio Grande from this Mexican city. It is perhaps the largest such migrant camp ever to have formed in the United States, and the Texas Department of Public Safety has formed a Maginot Line of cruisers blocking off the flow from across the river while the Department of Homeland Security is using a fleet of school buses to relocate the thousands who got in.

But as federal and state authorities work to shutter the migrant shantytown, a basic necessary question has gone unasked and unanswered: Why did this happen?

The answer to that might better inform any American response to make sure it never happens again, with an encampment of that size’s latent public safety and national security threat.

To find the answer, this writer came to Ciudad Acuna, the city through which the migrants had passed to form the encampment and asked several dozen of them what happened.

The surprising answer, which the migrants provided independently in different places and at different times, was universal: on Sunday, September 12, the Mexican government effectively sent a mass of migrants it had bottled up for months in its southern states up to the American border. This move, which appears to have been done under the cover of Mexico's independence week of celebration known as El Grito, essentially foisted a humanitarian problem onto the Americans in a single week.

A quick background is necessary to understand what the migrants were saying. In short, when it was newly installed in January, the Biden administration began to  pressure Mexico to maintain and use its National Guard and immigration bureaucracy to slow the flow of expected caravans and of tens of thousands of Haitians and other migrants coming in from all over the world. This was a fairly quiet diplomatic campaign, and it coincided with billions in promised U.S. aid and other benefits such as covid vaccines. It was a different approach from the Trump style of threatening to damage the Mexican economy with tariffs unless the leadership slowed U.S.-bound illegal immigration coming through Guatemala.

In response to Biden’s softer approach with gifts, Mexico apparently responded with a lighter version of a Trump-era tactic, which was to require that migrants entering from Guatemala be held in the southern state of Chiapas, in the border city of Tapachula, until they applied for and obtained temporary legal permits. National Guard roadblocks reinforced the policy.

As CIS reported in March from Mexico, many thousands of immigrants willing to invest in bribes and smuggling fees obviously find ways around the National Guard. But many thousands of others chose not to invest in these expensive end-runs and stayed in Tapachula for months hoping for cheaper Mexican papers solution.

Probably by design, the documents were slow to come, taking three, four or five months. A sea of migrants built up behind this bureaucratic dam, tens of thousands of them 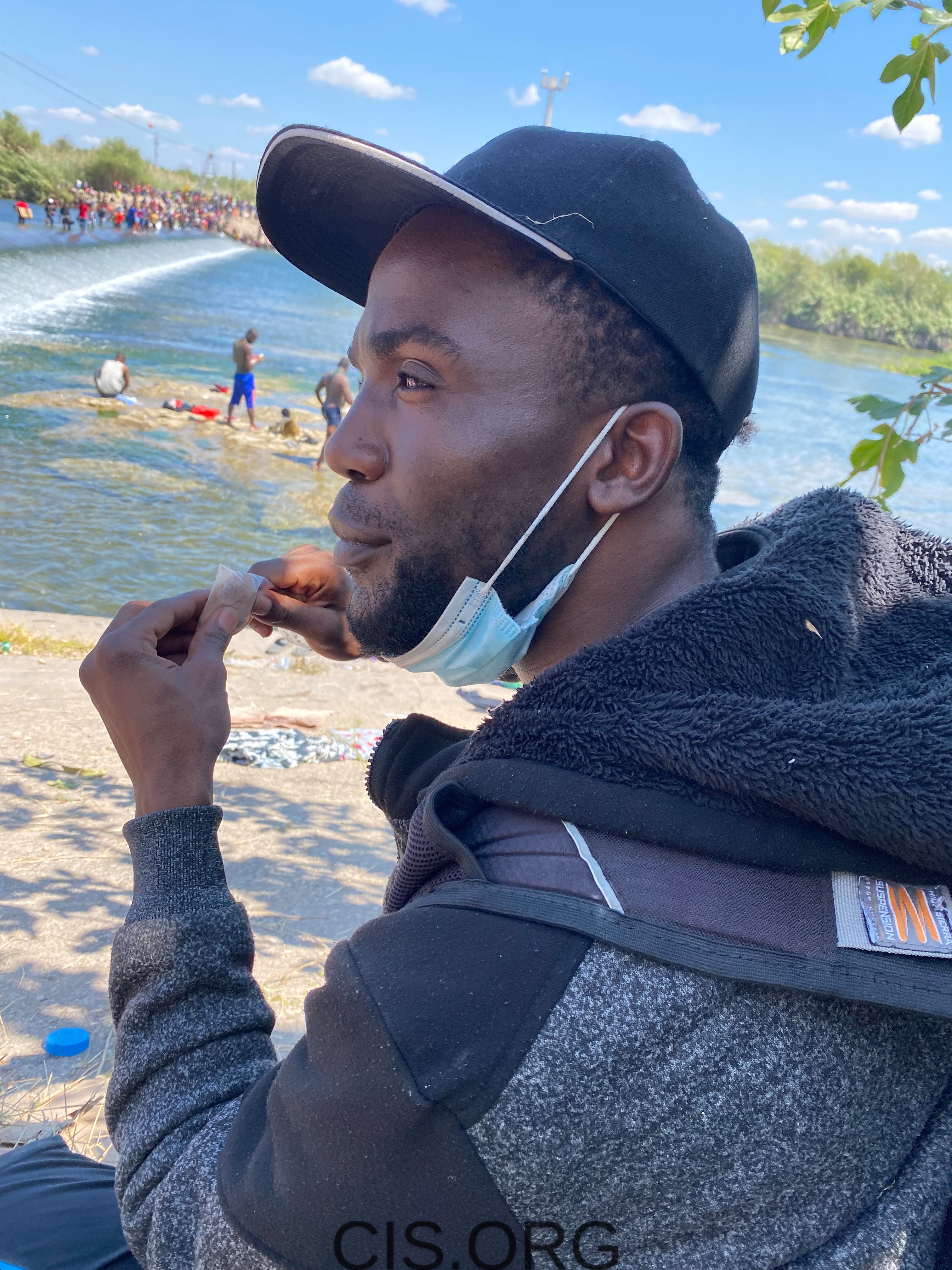 A Haitian migrant named Baya said Mexican authorities told him he was free to leave the southern city of Tapachula in celebration of Mexican independence day. Photo by Todd Bensman.

Here in Acuna, for example, a Haitian who identified himself only as “Baya” said he was among them. Every couple of days for more than four months, he would visit a Mexican immigration office to check in and ask for an update on his papers. Always nothing, he said.

Then, out of the blue one day, according to Baya, the immigration office officials in Tapachula announced he was free to leave town without the papers, in celebration of Mexican national independence the following week of September 16. He was referring, of course, to El Grito.

“The festivities going in Mexico opened up the opportunity for us to travel,” Baya said. “They said we were free to leave for three days. I went.”

Other migrants provided the same story about how a thick bureaucratic fog in Tapachula suddenly lifted that Sunday of September 12, ostensibly for the Mexican holiday, though some of the migrants did not cite a specific three-day time period.

“The government allowed us to leave,” another Haitian migrant, who gave his name as Kelson, said. He was with a small group that had just gotten off a bus that departed from Tapachula. The government decision to let everyone leave permit-less was very sudden.

“We don’t know why, but a lot of the offices were going to be closing for the holiday.”

He said thousands of Tapachula migrants left town as soon as they could and headed for Ciudad Acuna and Del Rio.

Another Haitian who wrote his name as Donley Vainqueur, said he and his family were forced to wait in Tapachula for months, applying for what he termed “passports” to the rest of Mexico. He said every day he would go to immigration to check on the status of his application.

Then, all of a sudden one day last week when he went to check, “They [Mexican immigration officials in Tapachula] said, ‘okay, you can cross for three days because of the days of festivities.'”

Why Del Rio and not other, more trammeled parts of the Texas-Mexico border?

Cheap and safe with no heavy cartel oppression or smuggling fees

The reason, according to the migrants CIS interviewed, the Mexican cartels in this city do not involve themselves in human smuggling as they do in other parts of northern Mexico. Migrants who get to Acuna are free to cross themselves over the river without paying a tax or smuggling fee to ruthless Mexican cartels, with no fear of violent retribution for doing so on their own.

These accounts square with prior CIS reporting from the area in the spring of 2021, which found that immigrants who were increasingly arriving in Del Rio had already probed other areas from California to Texas but that fear and price-sensitivity led them to Del Rio. Word obviously has spread.

The migrants CIS spoke to all said they had heard from friends, relatives, and acquaintances on social media and by word of mouth that they didn’t have to pay anything to cross the Rio Grande here.

Migrants get off a bus in Ciudad Acuna on their way to illegally cross the border into Del Rio. Photo by Todd Bensman.

The migrant interviews comport with the arrivals of bus after bus here in Acuna, about every 15 minutes all day long every day for a week, local business owners said. At the main city station, CIS witnessed buses pull in and empty out passengers who all appeared to be migrants.

Mostly Haitians then gathered their children and belongings and headed out to the surrounding streets looking for taxi cabs to the river a mile or two away. Every migrant that CIS spoke to said they had just come from the Tapachula area.

Several said they would not stay in town at all but would go immediately to the main river crossing, which CIS found thronged by thousands of migrants coming and going, freely, via a barely submerged cement water-control dam that led to the Texas side.

At the Texas camp, as CIS has reported, Border Patrol agents issue numbered carnival-type tickets, taking a place in a line expected to last for weeks.

Many are now boarding yet more buses inside the camp, these ones provided by DHS to take them to Border Patrol processing stations. Some may be deported. But most likely will spend a day or two until they get temporary resident permits and a date to appear at an American immigration office in the city of their choice. Then under current Biden policies for families and unaccompanied minors, a great many will be released to travel anywhere in America, boarding yet more buses to those cities and towns.

Implications of Mexico’s opening of the sluice

CIS could find no public reporting of any official Mexico announcement or confirmation of these immigrant accounts.

A view of the migrant shantytown in Del Rio from the international bridge. Photo by Todd Bensman.

A casual move such as suspending deterring strategies under cover of a holiday, or perhaps for the express purpose of transferring a humanitarian burden to the United States, indicates a diplomatic failure by the Biden administration in choosing carrots rather than Trump’s stick in dealing with Mexico. The move hints at how Mexico’s leadership regards the Biden administration’s quid pro quo arrangements of aid for help with illegal immigration from Guatemala.

It remains unclear if Mexico has since shut the gate behind these thousands or has left it open. None of the migrants CIS interviewed seemed to know if friends or relatives in Tapachula were still free to board buses to Acuna.

And it remains unclear whether any of the expensive and time-consuming U.S. law enforcement action to manage the problem will lead to consequences for Mexico.

Preferring the public not know too

In a sign of keen awareness that the Del Rio encampment situation portends political damage in an area where polls show Biden is already very weak, the administration has picked a strategy of not speaking about it and working to make sure no one else did either.

The White House had not addressed the camp. Up until Friday, DHS was content to let the city of Del Rio lead a press conference about national immigration policy and what was happening.

The federal government barred reporters from touring the site and rarely made officials available for questions. At one point, the Federal Aviation Administration issued a ban on unmanned aerial vehicles over the bridge area, a measure that seemed aimed at Fox News, which has fielded a drone team to photograph the migrant shantytown.

What remains to be seen is whether the same concern for appearances about the Del Rio encampment will motivate the administration to shift to a harder-edged diplomatic strategy with Mexico, in addition to adding the fleet of buses to move the migrants away from the river.