CIUDAD ACUNA, Mexico — With virtual diplomacy, an in-person delegation, and taxpayer cash, President Joe Biden has tried to induce Mexico to halt a fast-rising flood of immigration across its southern border as a means to ease the mounting mass-migration crisis on the U.S. southern border.

But the strategic linchpin upon which the administration has put all its betting chips — the continued deployment of nearly 9,000 Mexican national guard troops along the Guatemala border and at 50 road checkpoints throughout southern Mexico — is proving systemically beatable. The evidence can be found in the thousands of people now staging for U.S. entries from northern Mexican cities like Acuna, who obviously bypassed the national guard. 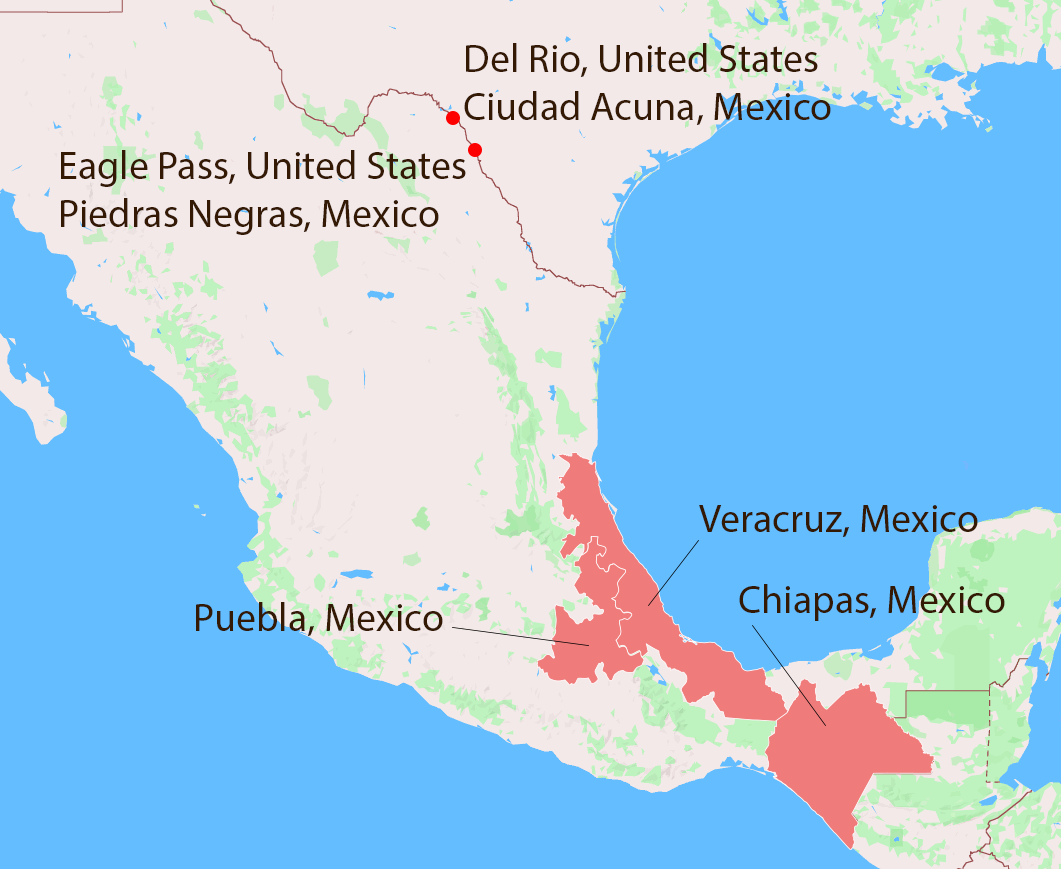 Their stories of bypassing the Mexican military in the southern provinces, gathered by the Center for Immigration Studies in interviews, reveal a military operation hobbled by corruption and bureaucratic ineptitude.

CIS has identified at least five methods by which immigrants are end-running the Mexican military effort, which President Donald Trump demanded in 2019 (under threat of ruinous trade tariffs) and which the Biden administration is now counting on to help end the embarrassing political spectacle of a full-blown mass-migration crisis that is developing on our southern border. The Biden administration secured Mexico’s commitment to maintain the military deployment while simultaneously promising U.S. taxpayer development assistance cash and spare coronavirus vaccines. Will this bet be for naught? CIS asked the immigrants who are defeating it already.

Mexican Policies Cancelling Each Other Out; the Mexican “Humanitarian Visa” End-Run 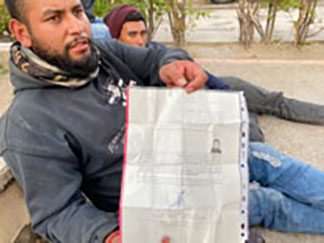 Danny Valentin Zavala Flores of Honduras shows the humanitarian visa that got him through national guard checkpoints to northern Mexico, where he has tried repeatedly to illegally cross into Texas. Photo by Todd Bensman.

The Mexican government apparently is issuing “humanitarian visas” and other travel permission slips to foreign national applicants allowing them to pass through the Mexican military checkpoints that were put there to stop them. The issuance of such permissions to regular economic migrants conflicts directly with the Mexican government’s — and the new American administration’s — stated policy objective of stymying their northward marches to the U.S. border. And yet CIS easily found several who professed to have done just that.

The Mexican Commission for Refugee Assistance (COMAR) issues the visas, which not only allow for freedom of movement throughout Mexico, but also qualify recipients for work authorization. But Danny Zavala Flores, 25, found a much more important benefit of the visa.

“I just showed it to the soldiers whenever they confronted me, and they just let me go through,” he told CIS just one hour after U.S. Border Patrol caught and returned him across the Rio Grande under the emergency pandemic expulsion policy known colloquially as “Title 42”.

Flores said he got his visa in the southern city of Tapachula in the state of Chiapas, about 30 miles from the Guatemala border he crossed, a city that Mexican soldiers, police, and immigration officers have boxed in with layered road checkpoints northward.

Ideally, the armed troops that have been working since July 2019 with unarmed Mexican immigration officers at the checkpoints return to the Guatemala border all immigrants traveling without authorization documents.

The surprising discovery that Mexico has provided travel permission papers to foreigners it and the United States want stopped raises the question as to how extensive the practice is.

That’s unclear as of this writing. But CIS found others who got Mexican documents that cancelled out the purpose of the Mexican troop deployment. Haitian citizen Eddyson Mettelis, lately of Acuna, said he, too, received a humanitarian visa that enabled him to travel to Tijuana, Mexico. He had to wait until President Trump’s term ended — along with policies that would have returned him to Mexico or even Haiti had he been caught at that time. He married a Mexican woman and, with President Biden talking about welcoming immigrants, decided to try his luck crossing in Texas.

Neither are the humanitarian visas the only travel permission slips Mexico is issuing. Another Honduran received an entirely different kind of travel permission slip on March 10, this one from Mexico’s immigration service, the INM, in the southern state of Tabasco on the Guatemala border. 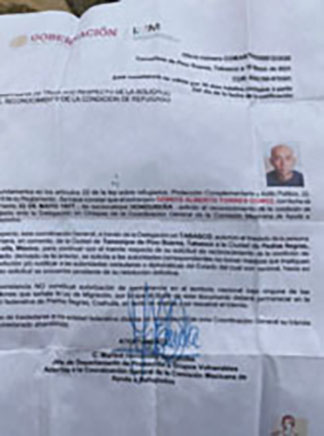 The INM granted Honduran citizen Dennys Alberto Torrez Gomez refugee status and permission to specifically travel to Piedras Negras, where CIS found him shortly after Border Patrol returned him to Mexico under Title 42.

Gomez said he chose to leave Honduras “because we felt the new president was going to help us.” He chose Piedras Negras to cross into Eagle Pass, Texas, because he heard fewer Border Patrol agents were around to catch him, but they did (the Biden administration currently releases the majority of family units that illegally cross, but returns single men and women that Border Patrol apprehends). He’ll keep trying, though, he said, knowing that because of his paper at least the Mexicans will leave him free to keep trying.

Four immigrants told CIS they were forced to pay Mexican troops who would board their buses and demand bribes for allowing them to continue their northward journeys.

Cuban citizen Moefil Poges Silva had just arrived in Acuna from Tapachula, hundreds of miles to the south. He said he and his wife and kids had been living well in Ecuador since October 2019, but decided to head to America “because Biden promised we could come and that the families were going to be kept intact. That’s why we’re here, because of what he promised.”

Silva, told CIS that he and wife and two children, once they hit the Mexican border, traveled with four other adult Cubans aboard buses. At the interior checkpoints, national guard soldiers would board and demand 1,000 pesos (about $50) per person to continue. He said he had to pay soldiers at three different checkpoints.

“The soldiers have a communication network going,” alerting one another who was coming on which buses, Silva explained. “They come straight on the bus and say, ‘if you want to advance, you have to pay.’”

Others described the same shake-down operations when they were hitching rides in cars and trucks. They didn’t all report the 1,000-peso price tag. One immigrant said the price was usually 250 pesos.

Whatever the going price, Olbi Orian Dormorel of Honduras said that whenever immigrants came anywhere near the soldiers there were “some who would want to take your money” while others merely neglected their duty. Dormorel described these latter soldiers as “more compassionate. They would give you some snacks and water ... and let you go forward.”

But those who wanted the money would just order “stop there! If you have money, okay, but if not, go back.’” Once, all Dormorel had left was 200 pesos. He felt lucky that the soldier accepted it.

End-Run on the Trains

Five immigrants in Piedras Negras and Acuna told CIS they avoided the national guard and their joint INM checkpoints by hopping on top of trains that took them into central Mexico.

Juan Farmin of Honduras said he and some other immigrants knew from social media about the national guard problem when they crossed from Guatemala, but also knew many were hopping a freight train out of the small city of Palenque, known for its Mayan ruins. He joined hundreds riding the train rooftops, and soldiers never bothered them.

Ronnie Lopez of Honduras rode the rails past the troops from the Veracruz city of Coatzacoalcos to Tierra Blanca, noting that he chose this method because everyone knows “the military doesn’t stop the trains” and also to avoid paying the bribes necessary on the buses.

Another Honduran immigrant spoke of a similar train route, saying he and his group slipped by a couple of initial checkpoints and then boarded a train in the southern Mexico state of Veracruz, which took them much farther, to Puebla State in central Mexico, well past the “danger” of Mexican troops. From there, they caught commercial buses without any hassle.

Several immigrants avoided paying bribes and riding train rooftops and instead hitchhiked to within sight of a checkpoints. They’d collect intelligence from local villagers as to where exactly they were.

Then they’d simply hike away from the road, work their way past the position by a few hundred yards through trees or brush, and come back to the road beyond the soldiers’ view. Hugo Orlando Castillo of Guatemala said he and his group did this nine times through southern Chiapas, usually at night.

“We would sneak up to them and then we went around them,” he said. “Any time we’d see a checkpoint, we’d bypass it.”

No smuggler or guide was necessary, although one immigrant told CIS he did hire a local guide to help walk around the soldiers.

At a popular illegal immigrant landing spot on the Texas side of the Rio Grande, just across from Acuna in the Texas town of Del Rio, a recovered and abandoned airline ticket reveals yet another method of bypassing the national guard roadblocks in the southern provinces. The ticket was found amid piles of clothing the aliens abandon because they are wet from the crossing. 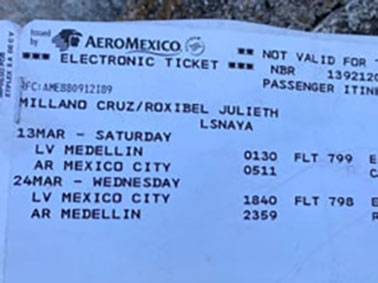 It was an AeroMexico ticket showing a round-trip flight from the Colombian city of Medellin to Mexico City, which is well beyond the national guard roadblocks.

While it is difficult to know how often immigrants fly over the military operations, the ticket reveals that they can and that others probably have, too.

The fact that CIS saw this ticket stub on March 24 where it was abandoned, the day of the return flight, shows the ticketholders were in Texas that morning stripping off wet clothes instead of on their way back to Medellin. One-way tickets north, after all, tend to raise suspicions and inspire questions by authorities.

An American Investment of Treasure and Hope in a Foundering Venture

A January 2020 CIS assessment of the Mexican military deployment on the ground in southern Mexico, titled “America’s Other Southern Border”, concluded that it was highly effective in halting and dispersing the huge caravans that formed in Honduras and El Salvador and forced their way through Mexico and the U.S. southern border.

But the CIS reporting showed that, while some corruption and localized smugglers known as “polleros” still enabled immigrants to exploit weaknesses in the operation, it was effective only in conjunction with Donald Trump’s push-back policies at the American border. These included the “Remain in Mexico” Migrant Protection Protocols and assertive ICE repatriations of deportable illegal immigrants by air back to home countries. These policies at the U.S. southern border, together with Mexico’s own military-backed deportation policies at its own southern border, clearly deterred untold thousands from trying their luck either in Chiapas or Texas, the CIS analysis concluded.

But that powerful combination no longer exists. President Biden has eliminated the complementary Trump policies, sharply curtailed deportations, and, through action and words, has invited all minors and family units to enter the U.S. rather than stay home.

These moves have left the already problematic Mexican military deployment to stand alone against a powerful rising wave of immigration from Central America and beyond of people enthused, determined, and highly incited to breach that already imperfect military operation. Short of reinstitution of deterrence-based policies by the United States, the Mexican operation is almost certainly doomed to fail.

If the Biden administration plans to rely entirely on Mexico’s ability to stop the wave it conjured, no amount of U.S. development assistance cash and Covid-19 vaccines is going to plug the widening holes in Mexico’s southern cordon.

"Video Report: Why the 2020 Caravans Threaten the Fragile Success of Trump’s Border Policies"