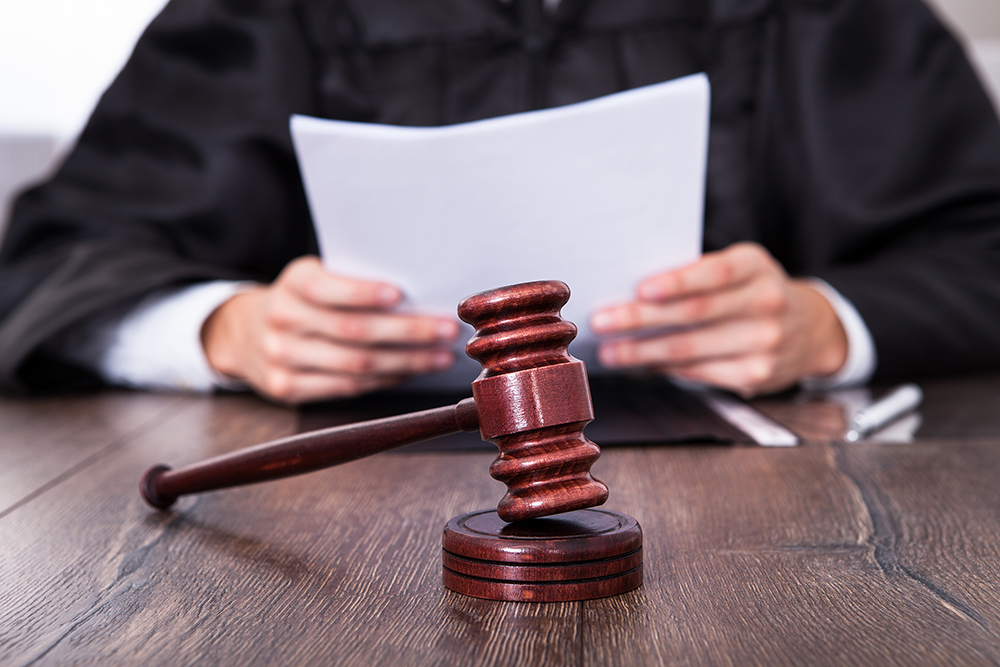 A panel of the Court of Appeals for the Ninth Circuit this week denied a motion for rehearing en banc in Dai v. Barr, a decision in which the court reversed a decision of the Board of Immigration Appeals (BIA) denying the alien-appellant's applications for asylum and withholding of removal. Given the fact that this was the Ninth Circuit, the decision itself was not exceptional, but the dissent from the denial was. In particular, the judges in that dissent persuasively argued that the circuit court had failed to follow Congress's express directions in the REAL ID Act having to do with the credibility of asylum applicants, and just plain misread the statute.

There are numerous points that the dissent (which essentially issued two different opinions and two different statements in 52 pages of text) made, but two stick out: one having to do with the presumption of credibility on appeal; the other having to do with "Simon says" — the magic words that an immigration judge (IJ) or BIA member is expected to use in the Ninth Circuit to express the fact that a witness's testimony is not credible.

Some background: The appellant is a Chinese national who asserted both past persecution and a well-founded fear of future persecution based upon his opposition to the Chinese government's family-planning policies:

Dai's claim for asylum is premised on events occurring in China in July 2009, when family planning officials came to take his pregnant wife for an abortion. Dai claimed he fought with officers, after which he was detained for ten days and eventually fired from his job. While Dai was detained, his wife was allegedly subjected to a forced abortion.

That claim is not unusual, and is actually similar to many that have been filed by Chinese nationals for decades. The following (from the original majority decision in this matter, captioned Dai v. Sessions) distinguishes Dai's asylum claim from those made by (likely thousands) of his countrymen:

In his amended dissent from the original panel decision, the same Judge Trott stated:

By omitting from their opinion the IJ's fact-based explanation of his decision, the majority elides eight material findings of fact the IJ did make, each of which is entitled to substantial deference.

First, the IJ specifically found that the information reported by the asylum officer about his conversation with Dai was accurate.

Accordingly, the IJ accepted as a fact that Dai admitted that he did not disclose the consequential truth about his wife's and daughter's travels because he was nervous about how this would be perceived by the asylum officer in connection with his claim.

Second, the IJ accepted Dai's admission as a fact that he concealed the truth because he was afraid of giving straight answers regarding his wife's and daughter's trip to the United States.

Third, the IJ determined that Dai had deliberately omitted highly relevant information from his Form I-589 application for asylum, information that he also tried to conceal from the asylum officer.

Fourth, the IJ found that Dai's omission of his information "is consistent with his lack of forthrightness before the asylum office[r] as to his wife and daughter's travel with him."

Sixth, the IJ found that Dai admitted he stayed here after they returned "because he was in a bad mood and he wanted to get a job and 'a friend of mine is here.'"

Seventh, the IJ said "I do not find that [Dai's] explanations for [his wife's] return to China while he remained here are adequate."

Finally, the IJ also credited Dai's concessions that his wife and daughter returned to China because "his daughter's education would be cheaper in China," and that "his wife wanted to go to take care of her father."

When Dai's subterfuge got to the BIA, the BIA said in its decision that "the record reflects that [Dai] failed to disclose to both the asylum officer and the IJ" the true facts about his family's travels. The BIA noted that Dai had conceded he was not forthcoming about this material information because he believed that the truth about their travels "would be perceived as inconsistent with his claims of past and feared persecution."

It is plain from the excerpts of their decisions that both the IJ and BIA did not believe that Dai was credible, and that he had attempted to conceal the fact that his wife and daughter had traveled with him to the United States and had voluntarily returned to China, despite the fact that his wife's alleged forced abortion (a ground for asylum relief itself) was a salient point with respect to his claim. In fact, as the dissent from the en banc petition noted: "Dai stated in the affidavit accompanying his application that he sought asylum because he wished to 'bring [his] wife and daughter to safety.'"

Congress, in the REAL ID Act of 2005, amended section 208 of the Immigration and Nationality Act (INA), adding specific rules for adjudicators to follow in assessing credibility, largely in response to unique and unusual rules that had been adopted by the Ninth Circuit, as the conference report for that act makes clear. For example, that report states:

[T]he creation of a uniform standard for credibility is needed to address a conflict on this issue between the Ninth Circuit on one hand and other circuits and the BIA. In Elias-Zacarias, 502 U.S. 478, the Supreme Court rejected the notion that a reviewing court may overturn a determination of the BIA in an asylum case whenever the court believes that the evidence supports a conclusion different from that of the BIA. It explained that "[t]o reverse the BIA finding we must find that the evidence not only supports that conclusion, but compels it.'' Id. at 481 n.1. Thus, an asylum applicant who "seeks to obtain judicial reversal of the BIA's determination ... must show that the evidence he presented was so compelling that no reasonable factfinder could fail to find the requisite fear of persecution.'' Id. at 483-484.

Judge Daniel Collins, in his dissent from denial of the en banc petition, argued that the majority in the three-judge panel committed what he termed "a serious legal error" by failing to recognize that the REAL ID Act of 2005 had "abrogate[d] a ... rule that we have applied in asylum cases — namely, the rule that unless the agency has made an explicit finding that the applicant's testimony is not credible, this court will conclusively presume that testimony to be credible." He continued:

As this case well illustrates, we have inflexibly applied this conclusive presumption as, in effect, a 'Simon says' rule: even where (as here) the record overwhelmingly confirms that the agency actually disbelieved critical portions of the applicant's testimony, we will nonetheless conclusively treat that testimony as credible if the agency did not make an explicit adverse credibility determination.

Judge Collins is referring to the REAL ID Act's elimination of the "deemed credible" rule, under which, absent an explicit finding that a witness's testimony was not credible, the circuit court would conclude that it was.

Interestingly (or incredibly, depending on how you look at it), the late Judge Stephen Reinhardt, writing for the majority in Dai v. Sessions, found that this rule did not apply to the circuit courts:

Properly understood, the rebuttable presumption provision of the REAL ID Act applies only to appeals to the BIA, not to petitions for review in our court. This is demonstrated by the fact that the statute says there is "a rebuttable presumption of credibility on appeal." ... In immigration cases, we do not exercise appellate jurisdiction. Rather, decisions by the finder of fact, the IJ, may be appealed to the BIA. ... We generally cannot review an order of removal unless the non-citizen has exhausted his appeal to the BIA. ... The "sole and exclusive means for judicial review of an order of removal" is by "a petition for review," not a further appeal. ... Moreover, unlike an appeal, which shifts an existing action to a new court, a petition for review commences a new action against the United States.

As Judge Collins frames this point in his dissent:

Because, according to the panel majority, the BIA here failed to invoke the REAL ID Act's rebuttable presumption to determine that any aspect of Dai's testimony was not credible ... this court is required to adhere to our deemed-credible rule and to conclusively presume that Dai's testimony is credible.

I will note initially in response that this point is exceptionally questionable on its face, as the REAL ID Act credibility standards were expressly intended to bring the Ninth Circuit in line with the rest of the circuit courts, which the excerpt from the conference report for that bill makes clear.

This argument fails, because the panel majority's sharp distinction between a "petition for review" and an "appeal" is refuted by the very statutory provision on which the majority relies. Section 242 of the INA does in fact state that our review of removal orders is by means of a "petition for review," ... but elsewhere in that very same section, the resulting proceeding in this court is expressly referred to as an "appeal." ... Given that the judicial-review provision on which the panel majority relies itself expressly refers to a "petition for review" as giving rise to an "appeal," there is no textual basis for the panel majority's conclusion that the reference to an "appeal" in section 208(b)(1)(B)(iii) excludes a "petition for review." ... Moreover, applying section 208(b)(1)(B)(iii)'s "rebuttable presumption of credibility on appeal" to both the BIA and the courts of appeals is consistent with the ordinary meaning of the phrase "on appeal," which refers to the process of appellate review, without regard to whether such review is formally denominated as an "appeal." ... Congress's explicit abrogation of the deemed credible rule thus extends to this court.

I would expect the Department of Justice to seek Supreme Court review of this decision. That said, the Court's schedule is short, and docket space is limited, so the nine justices cannot reverse every patently wrong decision.