Back to a September 10th World 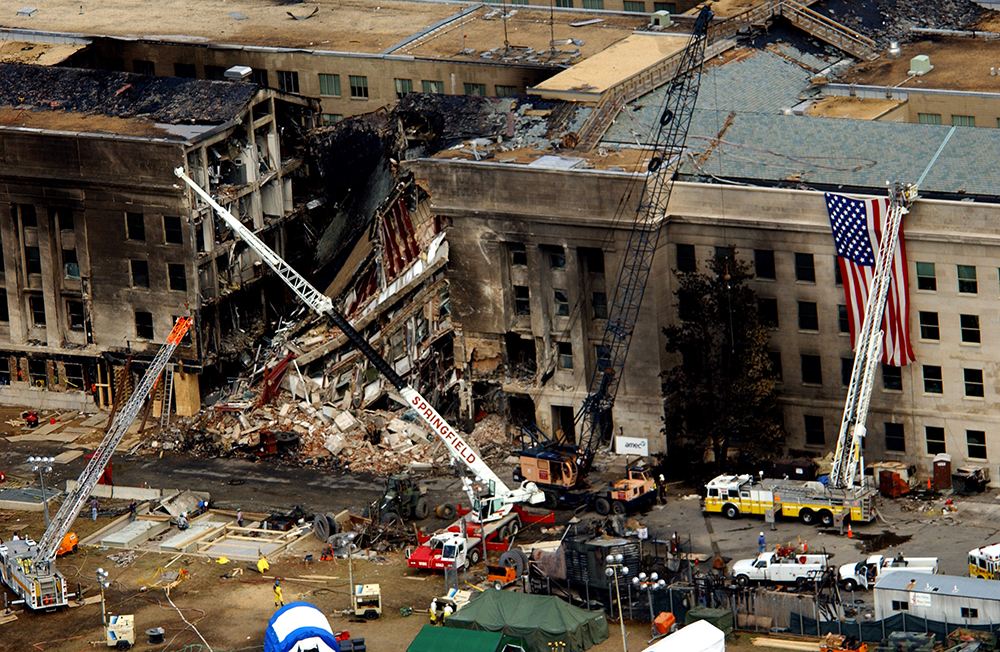 On the 18th anniversary of the darkest day in the last seven decades of American history, it is natural to look back at not only the events that led to the attacks of September 11, 2001, but also to review the lessons that were learned from the series of missed opportunities to prevent those attacks. Regrettably, many of those lessons have been forgotten, and many of the protections that were implemented in response have started to erode. Nowhere is that more true than in the so-called "sanctuary jurisdiction" movement that has gained strength in states and localities across America in recent months and years.

I was in a unique position to see the system as it existed up to that morning. I had been a trial attorney at the former Immigration and Naturalization Service (INS), and I came to handle a number of what were known as "national security cases" — cases involving aliens who were alleged to have been involved in espionage, persecution, and terrorism.

Cases involving spies and persecutors were a lot easier to handle than terrorism ones because (1) government officials and immigration adjudicators were more familiar with the concept of spying and persecution; (2) there were generally convictions that backed up our allegations of espionage (and sometimes of persecution); (3) terrorism was largely viewed as a "one-off" phenomenon (the so-called "lone-wolf" scenario) and the significance of relationships with other terrorists were not considered to be that significant; and (4) cases usually involved terrorists who had not yet acted.

Concerns were rife, among high-ranking government officials and adjudicators both, that alleged terrorists were being targeted on account of their ethnicity, or their religion, or simply because they were associated with other, known terrorists. Yes, they argued, terrorism existed and would occur, but was the proof really there that this individual was a terrorist, or was planning terrorism?

Investigators and prosecutors had to second-guess their own cases themselves constantly to ensure that such prejudices did not taint conclusions. Public opinion did not help in this regard: The attorneys for alien respondents were free to talk to the press to defend their own clients against such allegations. The Department of Justice did not comment on pending cases, and this was especially true when the evidence was based on intelligence that, if released, could tip off other terrorists. Only one side of the story usually ever got out.

Most critically, however, intelligence that could be turned into hard evidence in those prosecutions was generally held by individual agencies, who jealously safeguarded that information.

As the 9/11 Commission stated in chapter 13 of its final report:

Much of the public commentary about the 9/11 attacks has dealt with "lost opportunities," ... . These are often characterized as problems of "watchlisting," of "information sharing," or of "connecting the dots." In chapter 11 we explained that these labels are too narrow. They describe the symptoms, not the disease.

In each of our examples, no one was firmly in charge of managing the case and able to draw relevant intelligence from anywhere in the government, assign responsibilities across the agencies (foreign or domestic), track progress, and quickly bring obstacles up to the level where they could be resolved. Responsibility and accountability were diffuse.

The agencies cooperated, some of the time. But even such cooperation as there was is not the same thing as joint action. When agencies cooperate, one defines the problem and seeks help with it. When they act jointly, the problem and options for action are defined differently from the start. Individuals from different backgrounds come together in analyzing a case and planning how to manage it.

In our hearings we regularly asked witnesses: Who is the quarterback? The other players are in their positions, doing their jobs. But who is calling the play that assigns roles to help them execute as a team?

Since 9/11, those issues have not been resolved. In some ways joint work has gotten better, and in some ways worse. The effort of fighting terrorism has flooded over many of the usual agency boundaries because of its sheer quantity and energy. Attitudes have changed. Officials are keenly conscious of trying to avoid the mistakes of 9/11. They try to share information. They circulate — even to the President — practically every reported threat, however dubious.

Much of the job of operational coordination remains with the agencies, especially the CIA. There [Director of Central Intelligence (DCI) George] Tenet and his chief aides ran interagency meetings nearly every day to coordinate much of the government's day-to-day work. The DCI insisted he did not make policy and only oversaw its implementation. In the struggle against terrorism these distinctions seem increasingly artificial. Also, as the DCI becomes a lead coordinator of the government's operations, it becomes harder to play all the position's other roles, including that of analyst in chief.

The problem is nearly intractable because of the way the government is currently structured. Lines of operational authority run to the expanding executive departments, and they are guarded for understandable reasons: the DCI commands the CIA's personnel overseas; the secretary of defense will not yield to others in conveying commands to military forces; the Justice Department will not give up the responsibility of deciding whether to seek arrest warrants. But the result is that each agency or department needs its own intelligence apparatus to support the performance of its duties. It is hard to "break down stovepipes" when there are so many stoves that are legally and politically entitled to have cast-iron pipes of their own.

Recalling the Goldwater-Nichols legislation of 1986, [Defense] Secretary [Donald] Rumsfeld reminded us that to achieve better joint capability, each of the armed services had to "give up some of their turf and authorities and prerogatives." Today, he said, the executive branch is "stove-piped much like the four services were nearly 20 years ago." He wondered if it might be appropriate to ask agencies to "give up some of their existing turf and authority in exchange for a stronger, faster, more efficient government wide joint effort." Privately, other key officials have made the same point to us. [Emphasis added.]

In response, the commission proposed a "National Counterterrorism Center" (NCTC), which has subsequently been established under a new Office of the Director of National Intelligence (DNI). The NCTC's job is to fuse domestic and foreign counter-terrorism information, analyze that information, and to share that information with its partners across the government.

The commission also looked at the broader picture, and the need for a unified effort in the intelligence community to address not just terrorism, but also other future national-security threats. It noted that one of the then-existing impediments to this effort was:

Structural barriers to performing joint intelligence work. National intelligence is still organized around the collection disciplines of the home agencies, not the joint mission. The importance of integrated, all-source analysis cannot be overstated. Without it, it is not possible to "connect the dots." No one component holds all the relevant information. [Emphasis added.]

That recommendation led to the establishment of the DNI itself.

For all of the breaking down of the "stovepipes" that existed between federal government entities in the aftermath of 9/11, recent years have seen many new barriers erected with respect to information relating to immigration violations, particularly between sanctuary states and localities on the one hand and the immigration-enforcement agencies on the other with respect to criminal aliens.

I have written, in recent posts, about such sanctuary policies (as well as "sanctuary-lite" policies) that have been instituted by two localities, Montgomery and Baltimore Counties in the state of Maryland. In one, I analyzed a sweeping executive order in Montgomery County captioned "Promoting Community Trust". The following excerpt from the local news about the reaction of County Executive Marc Elrich (D) to that order and his county's attitude toward ICE will give you a flavor:

Speaking from the podium in a room full of activists and members of the press, Elrich opined that the mandate will strengthen trust and safety within the county of nearly 1.1 million residents.

"If ICE thinks it's really important, they can probably get here. You know, they've got cars. They know where the jail is. They know where the pre-release center is. ... It's not my job to do that part of their job," Elrich stated with a slight grin on his face. "If ICE manages to be outside the [jail] door when someone walks outside the door, I can't do anything about that, but if they ask us on anything other than a judicial order, then we're not holding them."

"It's really partly the definition of terrorism, to take the civilian population and subject them to constant fear, that is terrorism in its basic form," Elrich remarked. [Emphasis added.]

Yes, you read that correctly. Immigration enforcement is now akin to terrorism, and Montgomery County, Md., refuses therefore to aid in the effort to enforce the immigration laws.

It bears repeating that all 19 9/11 terrorists were aliens present in the United States, that Hani Hanjour (who flew America Airlines Flight 77 into the Pentagon at 9:37 AM that morning) obtained a Maryland ID card on September 5, and that "Ziad Samir Jarrah, who was on board United Airlines Flight 93 that crashed in Pennsylvania on 9/11, was issued a speeding ticket on September 9 in Maryland for driving 95 miles an hour in a 60-mile-per-hour zone."

More mundanely, however, sanctuary policies (and attitudes such as that expressed by County Executive Elrich) impede the ability of ICE agents to apprehend and remove criminal aliens, and to thereby prevent them from committing additional offenses (often if not usually targeting other aliens in their own communities). Future victims will suffer because there are sanctimonious public officials hustling for future votes and/or higher office, who believe that the simple enforcement of the immigration laws written by Congress is the equivalent of the murders committed on that awful Tuesday morning. There will not be (I hope) 2,977 victims killed in a matter of a couple of hours again, but there will be even more who will be killed, maimed, or robbed, or have their innocence stolen from them, one crime at a time, as criminal aliens are allowed to walk free instead of being removed, as the law stipulates.