Can Natives Use Their English Literacy to Complement (Rather than Compete with) Immigrant Labor?

Last week CIS published my new report on immigrant literacy. Based on scores from an objective test of English ability, the report concludes that the magnitude and persistence of low English literacy among immigrants is a serious concern, and that subjective measures of literacy — e.g., self-assessments — tend to understate the problem.

The report uses scores from the literacy portion of the Program for International Assessment of Adult Competencies (PIAAC), a battery of tests administered in the United States between 2012 and 2014. Although I focused on how immigrant scores are substantially (and persistently) lower than native scores, natives themselves can struggle with literacy to a surprising degree — especially natives who experience labor market difficulties. 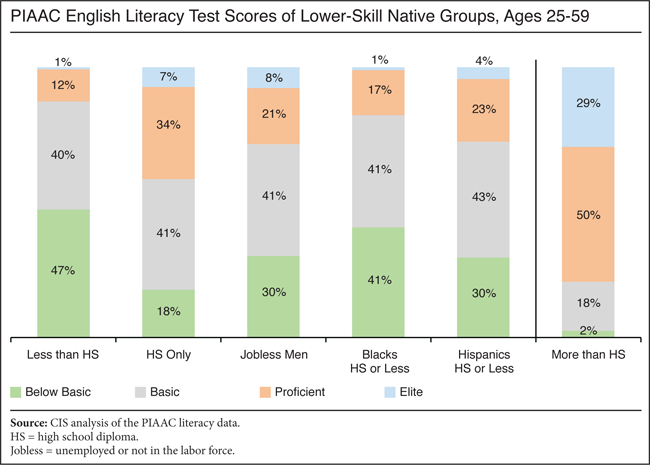 Why does this matter for immigration policy? Because the extent to which less-educated natives and less-educated immigrants compete for the same jobs is a matter of active debate among economists. The optimistic view is that natives can harness their superior knowledge of English by shifting to more language-intensive work. As a writer for the Federal Reserve Bank of Minneapolis put it, "Inflows of foreign low-skilled workers allow increased specialization of labor, with immigrants assigned mainly to manual tasks and U.S. natives performing most jobs requiring proficiency in English." If true, less-educated immigrants and natives would complement each other by working in different parts of the labor market.

Unfortunately, the figure above suggests that many less-educated and jobless natives are not good fits for English-intensive jobs. Though almost all speak English, they generally do not possess the "proficiency" ascribed to them, and many are below basic or functionally illiterate. In fact, the PIAAC dataset shows that the most common jobs held by U.S.-born men with below-basic literacy are truck driving, construction, and agricultural labor — none of which has substantial literacy requirements.

Although some natives can shift to English specialization in response to immigration, it appears that many others must compete directly with immigrants for the same low-skill jobs.