By Steven A. Camarota and Karen Zeigler on September 15, 2018

On September 13, the Census Bureau released some data from the 2017 American Community Survey (ACS) that shows significant growth in the immigrant (legal and illegal) population living in the United States. The number of immigrants (legal and illegal) from Latin American countries other than Mexico, Asia, and Sub-Saharan Africa grew significantly, while the number from Mexico, Europe, and Canada stayed about the same or even declined since 2010. The Census Bureau refers to immigrants as the "foreign-born", which includes all those who were not U.S. citizens at birth. The Department of Homeland Security has previously estimated that 1.9 million immigrants are missed by the ACS, so the total number of immigrants in 2017 was likely 46.4 million.1

Data Source. On September 13, 2018, the Census Bureau released some of the data from the 2017 American Community Survey (ACS). The survey reflects the U.S. population as of July 1, 2017. The ACS is by far the largest survey taken by the federal government each year and includes over two million households.7 The Census Bureau has posted some of the results from the ACS to its American FactFinder website.8 It has not released the public-use version of the ACS for researchers to download and analyze. However, a good deal of information can be found at FactFinder. Unless otherwise indicated, the information in this analysis comes directly from FactFinder.

The immigrant population, referred to as the "foreign-born" by the Census Bureau, is comprised of those individuals who were not U.S. citizens at birth. It includes naturalized citizens, legal permanent residents (green card holders), temporary workers, and foreign students. It does not include those born to immigrants in the United States, including to illegal immigrant parents, or those born in outlying U.S. territories, such as Puerto Rico. Prior research by the Department of Homeland Security and others indicates that some 90 percent of illegal immigrants respond to the ACS. Thus all the figures reported above are for both legal and illegal immigrants. 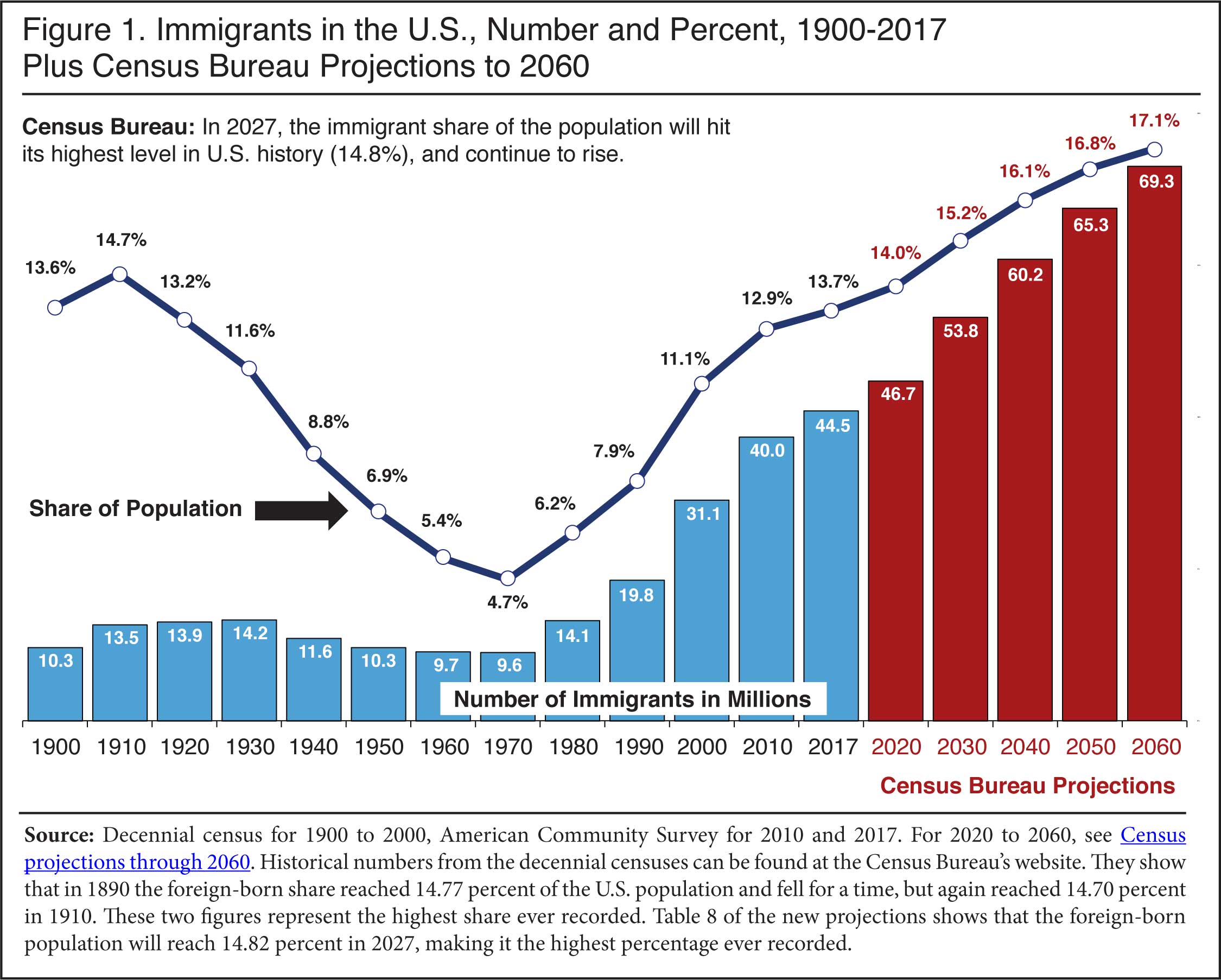 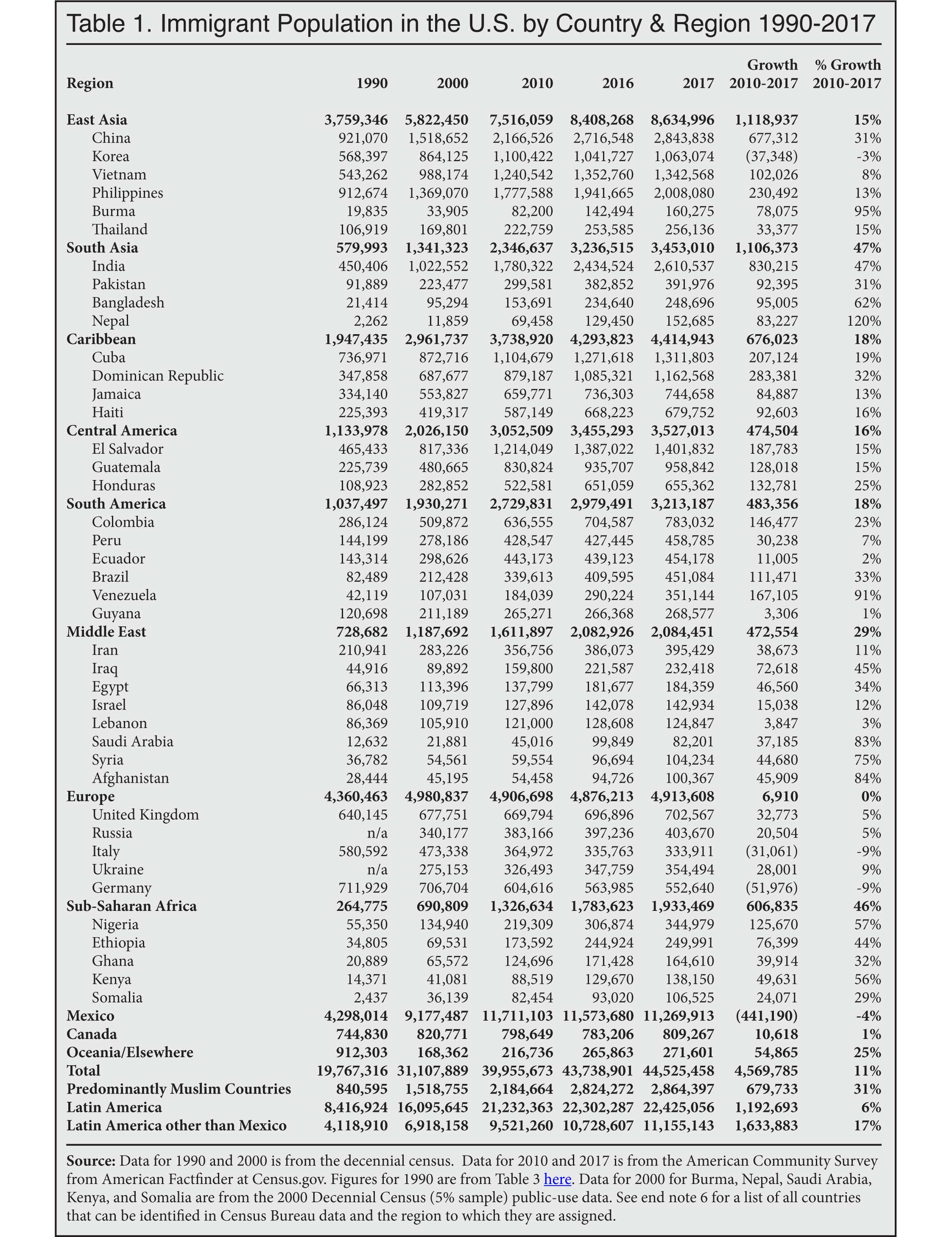 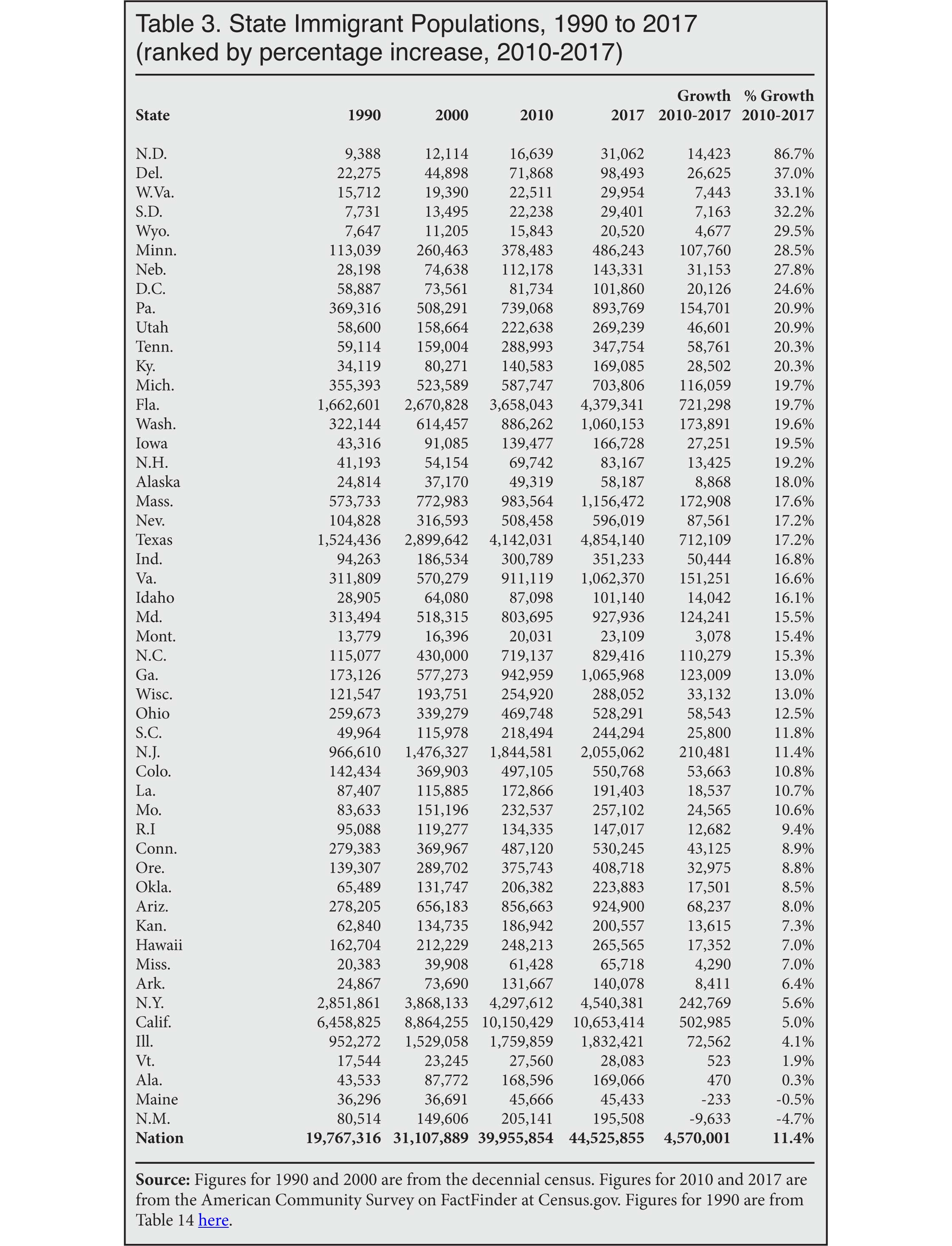 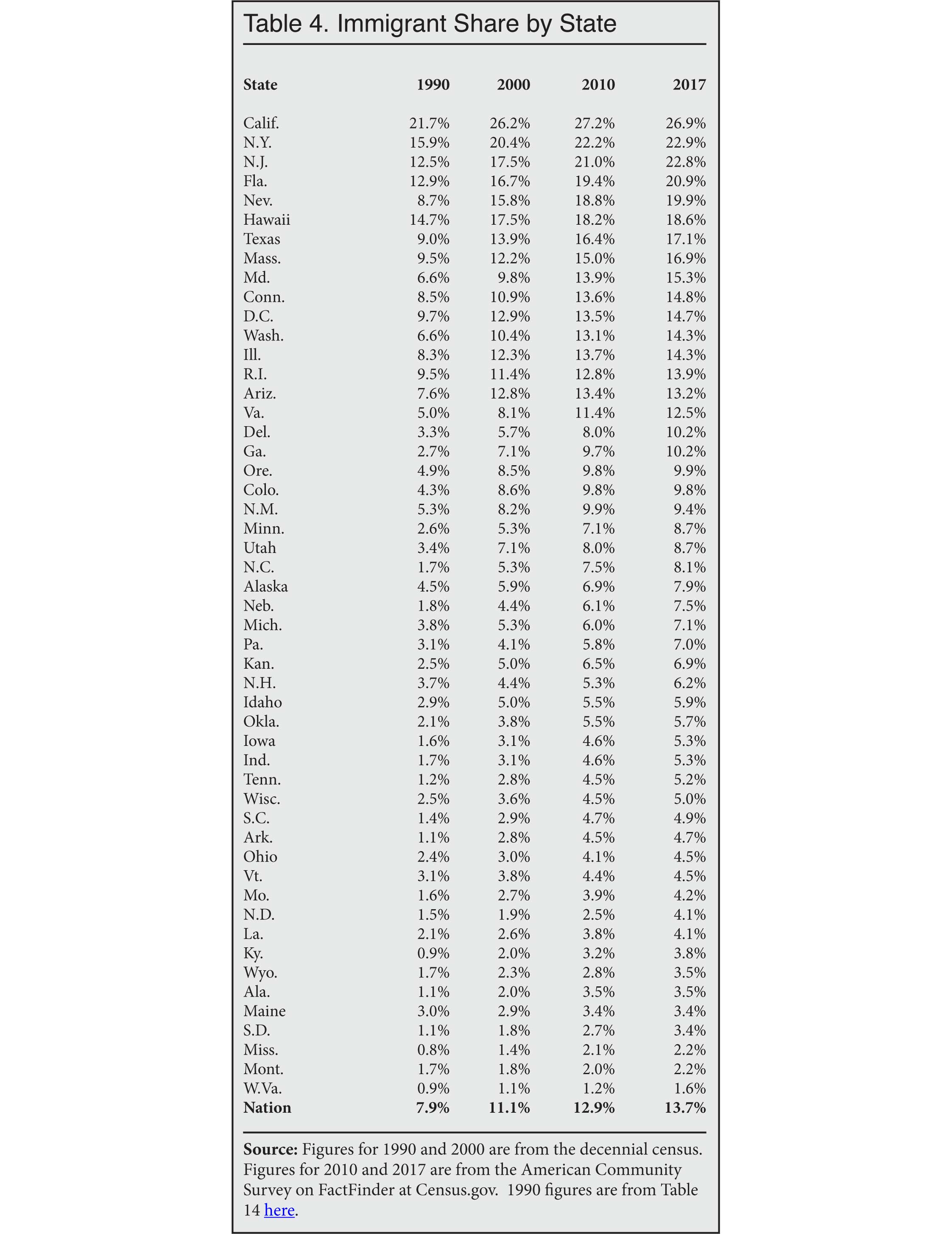 2 In addition to asking about citizenship and country of birth, The ACS also asks immigrants what year they came to the United States.

4 The figures for immigrants are from the 2017 American Community Survey (ACS). The figures for children are from the public-use files of the 2017 and 2018 Current Population Survey Annual Social and Economic Supplement (CPS ASEC) and are for those under age 18 born in the United States with either a mother or father born outside of the United States. Unlike the ACS, the CPS ASEC asks all respondents, including children, about their parents' places of birth. The CPS ASEC is collected in March each year. The 2017 survey showed 16.88 million U.S.-born children with at least one immigrant parent and the 2018 survey showed 17.40 million children with at least one immigrant parent. Assuming constant growth from 2017 to 2018 means that four months after July 1, 2017, the control date of the 2017 ASC, there were 17.1 million U.S.-born minor children of immigrants.

5 Using the same method to estimate out-migration used in endnote 3 indicates that roughly 1.01 million Mexican immigrants returned home between 2010 and 2017. There were 1.14 million new arrivals (the 1.22 million shown in Table 1 minus one half year of arrivals) from Mexico, so net migration from Mexico is almost certainly not zero as is sometimes reported in the media. However, it is now nearly so. Moreover, it is not zero or even negative if one includes the U.S.-born children who go to Mexico with their immigrant parents. To arrive at the above number, we estimate 570,000 deaths among Mexican immigrants living in the United States between 2000 and 2017.

7 Detailed information on the American Community Survey methodology, questions, and other topics on the can be found here.