No, Covid-19 Is Not Grounds for TPS

Democrats getting desperate to deliver on amnesty promise 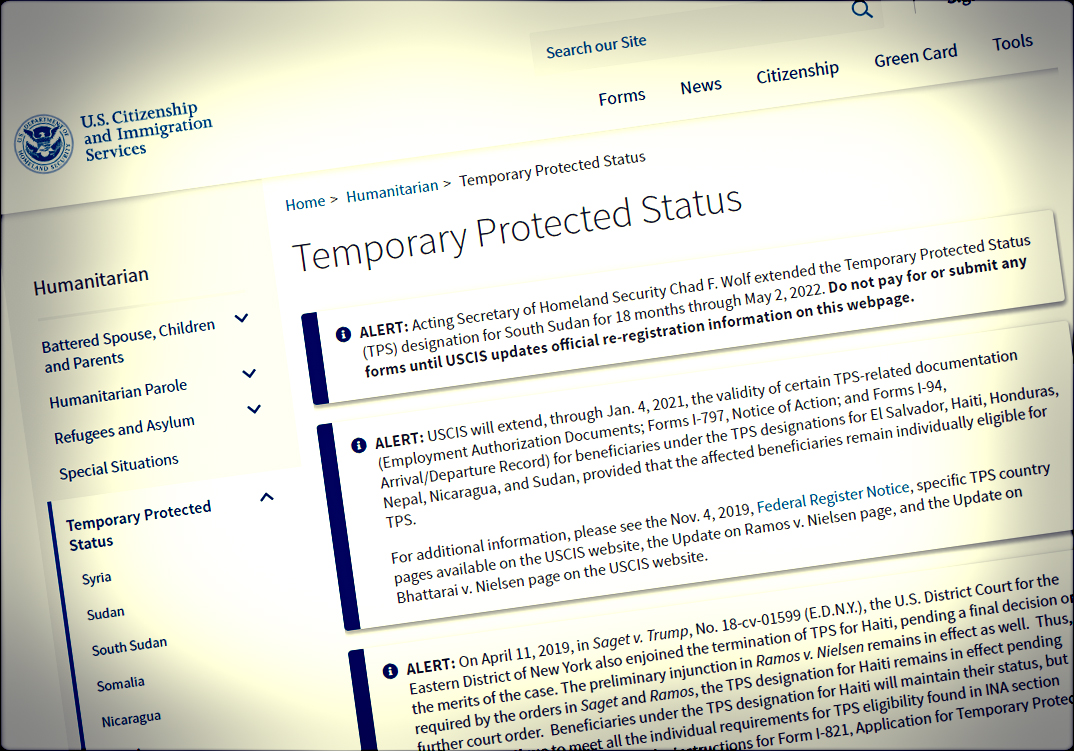 Democrats in Washington, D.C., are reeling as their plans for a large-scale amnesty have collapsed during President Biden’s first year in office. Despite polls produced by advocates of unlimited immigration purporting to show that amnesty is popular with the American people, Senate Democrats resorted to a plan to use the budget reconciliation process to pass an amnesty on a party-line vote. This plan was dubious from the start because amnesty (and the increases to legal immigration which were also included) are policy issues, not budgetary issues that would allow passage on a simple majority vote instead of the standard 60-votes required to overcome the filibuster. The Senate parliamentarian correctly rejected this effort three times, with each iteration of amnesty offered up less persuasive than the previous.

Concerned about a primary challenge from the left by self-described socialist Rep. Alexandria Ocasio-Cortez, Senate Majority Leader Chuck Schumer intended to put the reconciliation bill, known as Build Back Better, on the Senate floor for a vote. Overriding the parliamentarian, a career official with expertise in these procedural matters, would have been a historic breaking of the norms of the upper chamber. That vote never occurred because shortly before Christmas, West Virginia Democrat Joe Machin said he's a “no”, depriving Schumer of the 50 votes he needed for Vice President Kamala Harris to cast the tie-breaking vote.

Now, 33 Senate Democrats are urging the Biden administration to grant amnesty-lite in the form of Temporary Protected Status (TPS) for illegal aliens from El Salvador, Honduras, Nicaragua, and Guatemala. In a letter to the secretaries of the Departments of Homeland Security and State, the senators wrote, “It is our assessment that the severe damage caused by back-to-back hurricanes just over one year ago, combined with extreme drought conditions, and the social and economic crises exacerbated by the COVID-19 pandemic, warrant such an action by the Administration.” They conclude the opening paragraph by adding, “Lastly, such designations would be consistent with the Administration’s commitments to address climate migration,” whatever that means.

There is a lot to unpack here. Under section 244 of the Immigration and Nationality Act, the DHS secretary may designate a foreign country for TPS due to one or more of the following circumstances: (1) ongoing armed conflict; (2) an environmental disaster; or (3) extraordinary and temporary conditions. The mere existence of any of these factors is not enough for an initial designation or an extension. Instead, the law requires that the ongoing armed conflict “would pose a serious threat to [the] personal safety” of the country’s nationals if returned; the environmental disaster requires that the home country is “unable, temporarily, to handle adequately the return”; and the extraordinary and temporary conditions must prevent the alien “from returning to the state in safety”. This aspect of the statute is routinely ignored and has led to absurd reasons cited to justify TPS extensions. The environmental disaster prong of TPS also has a third element for eligibility which requires the home country’s government to request the designation.

In the letter, the senators request a “redesignation” of TPS for El Salvador, Honduras, and Nicaragua, and an initial designation for Guatemala. The Trump administration actually terminated the designations for El Salvador, Honduras, and Nicaragua after correctly finding that the statutory conditions no longer existed. However, illegal aliens from those countries still continue to enjoy the benefits of TPS (work permits, Social Security numbers, driver’s licenses) because activist judges blocked the terminations despite clear statutory language that TPS decisions are not subject to judicial review. On the other hand, Guatemala has never received a TPS designation and the letter correctly notes that the Guatemalan government has requested the designation, as it tends to do whenever there’s a hurricane, flood, or volcano eruption.

There is no statutory basis for “redesignation” and the term cannot be found anywhere in INA 244. A “redesignation” is really a new designation that should imply that different conditions now exist in a particular country that independently meet the statutory criteria. In practice, the “redesignation” is just an unlawful tool to reward illegal aliens with amnesty-lite who came to the United States after the initial grant of TPS.

The senators’ letter does not come close to laying out a statutorily sound basis for TPS. First, they make their case for the environmental disaster prong, writing that the Central American “region has experienced extreme weather events”. This is the first legal fallacy as TPS is country-based, not region-based. The senators go on to describe increased levels of hunger; the selling of land, tools, and livestock (presumably to generate cash flow); and “missing meals or eating less nutritious meals”. Taking these claims as true, these factors still fail to demonstrate that any of the home countries are “unable, temporarily, to handle adequately the return” of its citizens. Hunger is a serious issue, as is a poor diet, but that has no bearing on TPS eligibility, and plenty of Americans suffer from “missing meals or eating less nutritious meals” as well.

Bizarrely, the senators add that there is “an uptick in outmigration from the region”. The desire of citizens of those Central American countries who are currently living there to want to relocate, either internally or to another country, is completely irrelevant to whether an alien in the United States can safely return to his or her home country. Again, the desirability (or lack thereof) of living in a particular country is immaterial to whether or not an alien can (or should) be allowed to remain in the United States.

Next, the senators highlight the Covid-19 pandemic as a cause for a TPS designation. Citing the International Monetary Fund, the senators explain that remittances are a key driver of the economy for these countries and that Covid-19 interrupted the pace of workers sending money back home, causing declines in gross domestic product (GDP). The GDP dips from 2020 range from an 8 percent or 9 percent decrease in Honduras and El Salvador to a 1.8 percent or 2 percent decline in Nicaragua and Guatemala. Considering the year’s data cited was the height of the global shutdown due to Covid-19 and is two years old, a cynic might conclude the senators cherry-picked the worst looking data. How did things change in 2021? Presumably, they did not get worse from a GDP perspective or the senators surely would have used those numbers to enhance their justification.

The Covid-19 paragraph actually undermines the senators’ justification for TPS and exposes their true intentions. First, being a poor country, or one suffering an economic dip or decline, is not a ground for TPS. Next, in a subsequent paragraph, the senators claim that a grant of TPS (read: work permits) is necessary to “secur[e] life-saving remittances”. TPS exists to prevent aliens from having adverse immigration consequences in the United States because a catastrophic event in the home country prevents them from safely returning, not as a tool to redistribute U.S. dollars to Central America (or any other country).

Also, the environmental disaster prong lists examples of qualifying events such as “earthquake, flood, drought, epidemic, or other environmental disaster”. Unfortunately, some do not understand the difference between an “epidemic” and a “pandemic”. As the senators repeatedly wrote in their letter, Covid-19 is a pandemic affecting every country in the world. Statutory words matter, and with the exception of Guatemala, none of the other countries has requested a designation.

In conclusion, the senators wrote, “It is our view that El Salvador, Guatemala, Honduras, and Nicaragua meet the standards for TPS.” Yet, the two-page letter is devoid of any analysis of the actual statutory requirements of TPS. The senators do not even bother to identify the specific TPS prong they’ve concluded each country qualifies under. If this letter were a law school exam response, the senators would surely fail for producing an “analysis” that boils down to “it’s true because I say it’s true.”

It is unsurprising that the Senate Democrats are making this push given the Biden administration’s proclivity for granting TPS regardless of the statutory requirements. To date, the Biden administration has awarded almost 500,000 work permits to illegal aliens from six countries through TPS designations, plus an unknown number to Hong Kong residents (or those who pose as one) through Deferred Enforced Departure, another amnesty-lite program similar to TPS. Alternatives to TPS exist, though the Biden administration refuses to use them because they do not result in work permits for the illegal aliens. Additionally, since 2020 (under the Trump administration), DHS has offered a variety of Covid-19 accommodations to prevent aliens in a lawful immigration status from lapsing.

As Breitbart News observed, the letter was signed by two Democrats facing tough re-election prospects (Raphael Warnock of Georgia and Catherine Cortez Masto of Nevada), while two other vulnerable Democrats did not join in (Mark Kelly of Arizona and Maggie Hassan of New Hampshire).