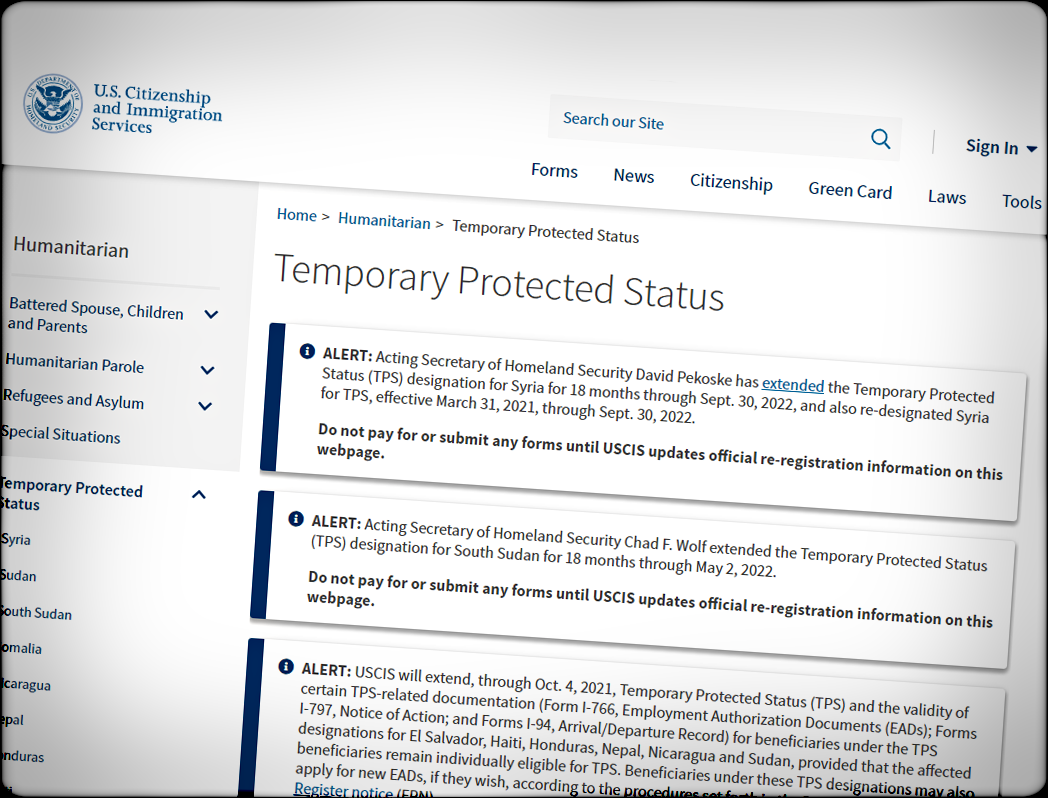 Temporary Protected Status (TPS) is a temporary form of relief that generally allows certain aliens to remain in the United States for a period of time if the secretary of Homeland Security (DHS) determines that conditions in the home country temporarily prevent the country's nationals from returning safely. Once the DHS secretary has designated a country for TPS, beneficiaries are not removable, permitted to work in the U.S., and may receive permission to travel abroad.

As the name implies, TPS is intended to be a temporary status, but as my colleague Mark Krikorian has rightly observed, in practice, TPS is about as permanent of an immigration status as an alien could possess.

The Department of Homeland Security (DHS) announced last Friday by press release that Temporary Protect Status (TPS) for Syria was not only extended for 18 months (consistent with determinations made under the Trump administration), but that Acting Secretary Pekoske was also "redesignating" Syria for TPS. I take no issue with the acting secretary's decision to extend TPS, but the second action, i.e., "redesignation", is objectionable because (1) it relies on a legal fiction; (2) rewards illegal aliens from Syria who more recently came to the United States; and (3) appears to be politically driven rather than based on a country conditions analysis, as required by statute.

The legal framework Congress established for TPS is found at Immigration and Nationality Act (INA) section 244. Under the law, the DHS secretary may designate a foreign country for TPS due to (1) ongoing armed conflict; (2) an environmental disaster; or (3) extraordinary and temporary conditions. The specific requirements for such designation are found at INA 244(b)(1):

(A) the [secretary] finds that there is an ongoing armed conflict within the state and, due to such conflict, requiring the return of aliens who are nationals of that state to that state (or to the part of the state) would pose a serious threat to their personal safety;

(B) the [secretary] finds that-

(i) there has been an earthquake, flood, drought, epidemic, or other environmental disaster in the state resulting in a substantial, but temporary, disruption of living conditions in the area affected,

(ii) the foreign state is unable, temporarily, to handle adequately the return to the state of aliens who are nationals of the state, and

(iii) the foreign state officially has requested designation under this subparagraph;

(C) the [secretary] finds that there exist extraordinary and temporary conditions in the foreign state that prevent aliens who are nationals of the state from returning to the state in safety, unless the [secretary] finds that permitting the aliens to remain temporarily in the United States is contrary to the national interest of the United States.

However, there is no statutory basis for "redesignation" and the term cannot be found anywhere in INA 244. By comparison, the word "temporary" appears over 40 times. Instead, a "redesignation" is really a new designation which would imply that different conditions now exist in a particular country that meet the statutory criteria. In practice, however, the "redesignation" is just a tool to reward illegal aliens with "temporary" status who came to the United States after the initial grant of TPS.

In the case of Syria, it has been designated for TPS since March 29, 2012, due to civil war. However, before Friday's decision Syrian nationals who continuously resided in the U.S. since August 1, 2016, and were continuously physically present in the U.S. since October 1, 2016, were eligible for TPS as a result of the Obama administration twice "redesignating" Syria for TPS during the periodic review. This legally dubious practice of "redesignating" a country for TPS encourages nationals of every country designated for TPS to find a way into the United States before the next TPS review so they, too, can receive "temporary" legal status and work authorization.

While the Trump administration continued Syria's TPS designation, it did not newly designate Syria for TPS, thus retaining the 2016 cutoff dates for eligibility. First, former Secretary Nielsen extended TPS for 18 months in 2018. Subsequently, former Acting Secretary McAleenan extended the designation for another 18 months in the fall of 2019, teeing up the next TPS decision to be made in late January 2021.

What has changed so drastically in Syria over the last 36 months to warrant a new designation? An examination of the DHS press release announcing Acting Secretary Pekoske's decision shows that the only thing that has changed is the U.S. presidential administration. DHS justifies the TPS extension plus new designation by stating that the "Syrian civil war continues to demonstrate deliberate targeting of civilians, the use of chemical weapons and irregular warfare tactics, and use of child soldiers. ... These conditions prevent Syrian nationals from safely returning." (Emphasis added.) The use of "continues" exposes the politically driven nature of this decision. Conditions are bad in Syria, but there is not a new, unique, independent event that has occurred since 2016; rather, it is merely a continuation of the same ongoing armed conflict. Barely a week on the job, Biden's DHS appointees have weaponized TPS to grant "temporary" amnesty to 1,800 additional Syrian nationals, nearly all of whom have likely overstayed their visas over the past four years. While the raw number of new beneficiaries is not large, it does reflect an increase in the TPS Syria population of over 25 percent (previously the population was approximately 6,700) and a clear indicator of the Biden administration's willingness to bend the immigration laws for the benefit of illegal aliens.

Another aspect of the DHS press release caused me to raise an eyebrow in surprise. Specifically, the press release claimed that the acting secretary made his decision "after consultation with interagency partners". While an average observer may not find that reference to be noteworthy, as the former chief of the Office of Policy and Strategy (OP&S) at USCIS, I do not believe it to be accurate. The TPS decision-making process is a laborious one that originates with OP&S staff drafting a decision memorandum for the acting secretary that must first be approved by the (acting) USCIS director with a recommendation based on the country conditions. The statute calls for DHS to consult with "appropriate agencies of the Government", but does not define which agency(ies) require consultation. Historically, the consultation has been with the Department of State (DOS) and, in my experience, the DOS recommendations come in at the 11th hour.

Now, when I left USCIS on Friday, January 15, career DOS staff indicated that they would not be able to make a recommendation before the statutory deadline (60 days before the expiration of the current designation) and expected that an automatic six-month extension of TPS would occur due to the failure of DHS to make a timely decision. Additionally, the draft recommendation when I left was for an 18-month extension without a new designation and, importantly, it had not even been reviewed by the Trump appointee running USCIS's daily operations. While it is possible that in only nine calendar days, the acting USCIS director (a career official) made a recommendation that was signed and sent to DHS, the acting secretary was then briefed on the memo (standard procedure), and DOS miraculously submitted its recommendation, I'm skeptical. Instead, this process reeks of political meddling to obtain a predetermined outcome regardless of the law and the relevant country conditions.