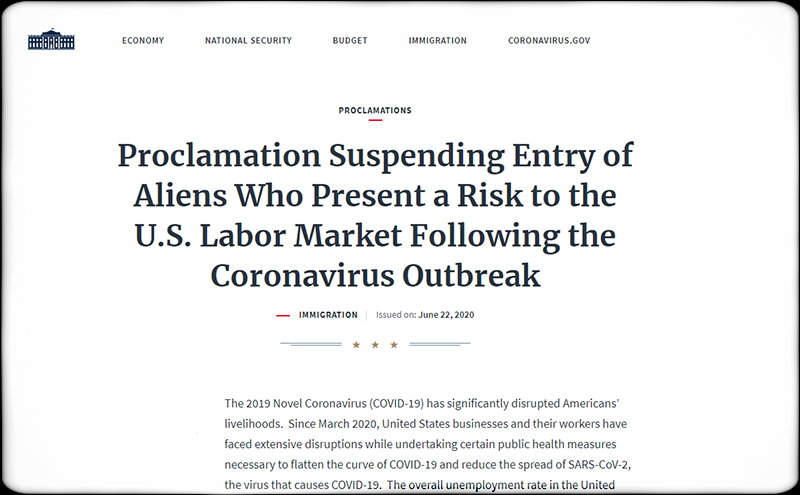 With 20 million unemployed and the jobless rate still more than triple what it was before the virus (and quadruple for immigrants), industry lobbyists had the gall to push for the continued importation of foreign labor.

On Monday, the White House pushed back.

President Trump renewed and broadened the immigration suspension originally issued in April. Extended to the end of the year, the updated measure keeps in place the limited suspension of immigrant visas, but also suspends a number of foreign work-visa programs.

In the face of furious lobbying by the affected industries (and their fellow-travelers inside the White House), the administration has suspended the entry from abroad of people on H-1B (“skilled” workers) and L (intra-company transferee) visas, plus most of those admitted on J (cultural exchange) and H-2B (unskilled seasonal non-farm workers) visas. It is estimating a reduction of perhaps half a million work visas.

I was sure there would be some sort of guest-worker suspension, but I also expected that the ban would be riddled with loopholes and carve-outs demanded by the Swamp.

Instead, the exceptions are relatively narrow. For instance, the only exceptions to the suspension of the H-2B visa (which the president’s own resorts often use to import housekeepers and the like) will be for those who “provide temporary labor or services essential to the United States food supply chain.” It’s a longer term question, of course, whether we should allow any part of our food chain to be dependent on imported labor. But that exception only covers 10 to 15 percent of the H-2B visas; the biggest users are landscaping companies, with lesser numbers of forestry workers, maids, waiters, and amusement park operators. These are all jobs Americans can do, and in fact are mostly done by Americans.

One program that was not exempted is notable. The au pair program is one of the many worker schemes deceptively packaged as “cultural exchange” under the J visa. It is beloved of upper-middle-class families who want cheap, but college-educated, nannies. I’d assumed that it wouldn’t be included in the suspension, if for no other reason than that lots of White House staff either use it themselves or have friends who do. And I’d heard that the program was, in fact, hotly debated between immigration hawks and doves in the White House. Its inclusion in the suspension is a small but important signal that the system isn’t entirely rigged in favor of the well-off.

Other pro-worker measures were announced Monday as well, including a directive for the Department of Labor to issue regulations to ensure the admission of H-1B workers, when it resumes, doesn’t disadvantage American workers; and limits on the issuance of work permits to eliminate a powerful incentive for illegal aliens to make fake asylum claims.

This is only a partial victory for the beleaguered legal-immigration hawks in the administration. Many of the pro-worker measures listed in the scorecard we prepared in anticipation of this announcement remain to be enacted. And temporary measures, premised on high unemployment, are just that — temporary; even if Trump wins reelection, these suspensions will have to be ended at some point as unemployment continues to drop. And if Biden is somehow dragged over the finish line in November, Trump’s temporary executive measures can be easily reversed (which is why formally promulgated regulations are always preferable, since they are, as it were, stickier, harder to undo).

But given the powerful moneyed interests demanding continued importation of foreign workers — and the many influential administration officials who share those views — Monday’s announcement was a real win.