PayPal this week banned at least 34 organizations for promoting "hate, violence or racial intolerance", including Richard Spencer's group and others apparently involved in the Charlottesville riot. PayPal's announcement mentions "KKK, white supremacist groups or Nazi groups" that have violated its acceptable use policy.

It's a private company (that's not yet regulated as a utility) so it can do as it pleases, and the Nazi/Klan creeps certainly aren't going to evoke any sympathy. But as someone who's been at the receiving end of "hate group" smears, it would be good to know how such decisions are made. PayPal's announcement notes that "our highly trained team of experts addresses each case individually" — highly trained in what? Sniffing out heresy? (No one expects the PayPal Inquisition!) When PayPal goes beyond the objective standard of banning activity prohibited by law to banning those it simply doesn't like (however loathsome they might be), all dissenters are vulnerable.

PayPal's highly trained experts haven't yet targeted my organization, but Twitter has, albeit in a small way so far. You can pay them to promote a tweet that's already been posted, as a form of advertising, and here are three that we submitted for promotion that were rejected:

Illegal immigrants are a large net fiscal drain because of their education levels and this fact drives the results. https://t.co/0t3iPsabQF

Not a question of treating illegal aliens like residents, it's discrimination against citizens in favor of illegals. https://t.co/iGp14o9D3l

The fiscal cost created by illegal immigrants of $746.3b compares to total a cost of deportation of $124.1b. https://t.co/0t3iPsabQF

All three were rejected on the grounds of "Hate": 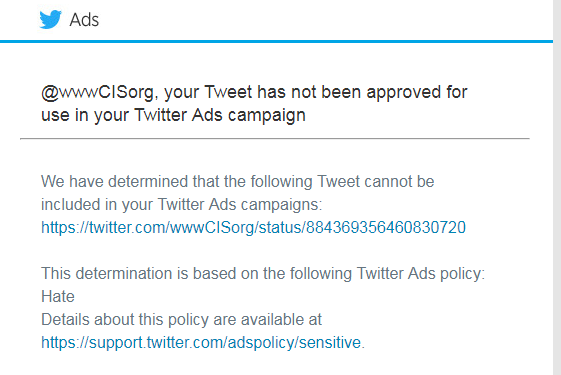 When you look at Twitter's "Hateful content in advertising" page, it looks like the very word "illegal" is indeed prohibited with regard to immigrants (as opposed to the U.S. Code, where it's common). It mentions "Hate speech or advocacy against a protected group or an individual or organization based on, but not limited to, the following..." including "Status as a refugee" and "Status as an immigrant".

This is merely a nuisance for me, so far, but it does point to the broader issue addressed by Jeremy Carl in his piece on National Review Online this week about regulating the big internet firms as public utilities. Carl writes "What is needed is not regulation to restrict speech but regulation specifically to allow speech — regulation put on monopolist and market-dominant companies that have abused their positions repeatedly."

One internet company this week abused its position but at the same time practically begged for the government to step in. Cloudflare is a sort of middleman facilitator between users and the web sites they're visiting. Because of the company's position in the infrastructure of the internet, its CEO, Matthew Prince, was able to simply shut down the Daily Stormer neo-Nazi website: "Literally, I woke up in a bad mood and decided someone shouldn't be allowed on the Internet." He explained his decision by noting that "the people behind the Daily Stormer are assholes," which they no doubt are.

But to Prince's credit, he continued: "No one should have that power":

"We need to have a discussion around this, with clear rules and clear frameworks. My whims and those of Jeff [Bezos] and Larry [Page] and Satya [Nadella] and Mark [Zuckerberg], that shouldn't be what determines what should be online," he said. "I think the people who run The Daily Stormer are abhorrent. But again I don't think my political decisions should determine who should and shouldn't be on the internet."

As Prince wrote in a blog post on the incident, "Without a clear framework as a guide for content regulation, a small number of companies will largely determine what can and cannot be online."

The internet is now a utility more important than phones or cable TV. If people can be denied access to it based on the content of their ideas and speech (rather than specific, illegal acts), why not make phone service contingent on your political views? Or mail delivery? Garbage pickup? Electric power? Water and sewer? (I hope I'm not giving the SPLC's brownshirts any ideas.)