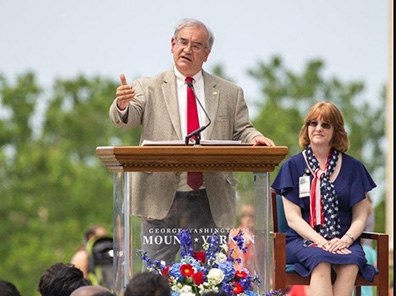 You’ve come a long way since you first got here. Whether you came on foot or by bus, or a ship or by airplane, you arrived here as strangers — many of you didn’t know the language, some didn’t have any friends or family here, and all of you were at least a little bit nervous about starting a new life in a new country.

Back in the 1600s, when George Washington’s great-grandfather John Washington crossed the ocean, newcomers who didn’t die of disease or insects or what have you in the first year were considered “seasoned,” and so they were thought  likely to survive and build a new life for themselves.

Although dangerous disease isn’t the problem here it once was (though Lord knows the insects are still bad), new immigrants still have a lot to learn, and can have some awkward and embarrassing experiences along the way. My grandfather, for instance, came to this country as a teenager before World War I. He arrived in Boston, and a relative outside the city told him to go to the train station and take the first “car” — meaning the streetcar — to their town. But his relative, like many of you, was already using English words in his Armenian, and used the English word “car,” meaning train car. Unfortunately, my grandfather didn’t know any English, and thought his relative had meant the Armenian word pronounced “car,” which means rock or stone. My grandfather somehow got to his relative’s house, knocked on the door, and said “Hi, here’s the rock — what’s it for?”

Those kinds of problems are behind you now — you’ve learned how to find an apartment, file a tax return, and open a bank account. But as comfortable as you’ve been living in America, until a few minutes ago you weren’t Americans. When you had breakfast this morning, you were Polish or Vietnamese or Burkinabe or Peruvian — but you’ll have lunch as Americans. Not many countries in the world allow that kind of thing; an Irishman, after all, can’t move to China and become a Chinese; a Mexican can't become a Nigerian. And yet each of you, from whatever country, has now become an American, as good as any other.

This matter of taking American citizenship, becoming part of the American people, is not like changing your clothes or buying a new car. Instead, this is a permanent and very serious thing you do, more like getting married or starting a family.

In the Jewish faith, a person who converts is considered to have been present in spirit when Moses came down from Mount Sinai with the Ten Commandments 4,000 years ago, even though that person’s ancestors were not physically there. In a non-religious version of this idea, once you took your oath of citizenship, you became present in spirit, along with all other Americans, at the defining events of your new nation’s history:

- The Indian immigrant who became an American this morning was present in spirit when George Washington signed the Constitution in Philadelphia in 1787, even though that immigrant’s ancestors weren’t in the room and weren’t even in the country;

- The Salvadoran immigrant who became an American today was present in spirit at the Battle of Gettysburg, where our Union was saved 156 years ago yesterday, even though her ancestors, like my own, were not among the soldiers;

- And the Danish immigrant who became an American today was present in spirit at Martin Luther King Junior’s “I Have a Dream” speech in 1963, even though his ancestors weren’t there either.

You’ve now been adopted into America’s family. This family isn’t tied just by blood relations, but also by common ideals, a common language, a common history, and common culture of many parts — what President Lincoln called the “mystic chords of memory.” That history is now your history, as well.

We welcome you as our newest countrymen. We entrust part of our nation’s future to you. We ask only that you love America, cherish America, honor her, protect her, embrace her, salute her, hold her dear. God bless you, and God bless America.