Cantor: These Are My Immigration Principles. If You Don’t Like Them, I Have Others

House majority leader Eric Cantor's attempt to have it both ways on amnesty is starting to give him a political headache. His little-known and underfunded primary challenger, economics professor Dave Brat, is starting to gain traction for the June 10 election by highlighting the contradictions between Cantor's pro-amnesty record in Washington and his campaign messaging.

Cantor recently sent out this mailer to voters in his district: 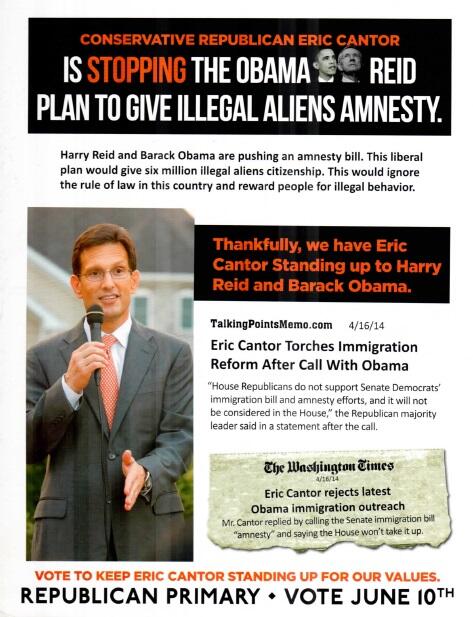 ... from which you'd think he was vying with Steve King for the title of most hawkish member of Congress on immigration. (Which is itself curious, since the pro-amnesty crowd is telling us that polls show even Republicans favor "comprehensive immigration reform." If that's so, why isn't anyone campaigning on it?)

But with this here Internet thingy, it's harder to dupe your constituents than it used to be. Cantor co-authored, and is one of only 19 members to endorse, the House Republican leadership "Standards for Immigration Reform," which are effectively the same as the framework of the Schumer-Rubio bill in the Senate: amnesty, more cheap labor, and promises of enforcement. Cantor's fulminations that he's stopping the Obama-Reid amnesty plan mean nothing if he's promoting his own approach to amnesty that's the same in every material respect.

One of the "standards" justifies amnesty for illegal aliens in a way that goes beyond anything the Gang of Eight Republicans have ever said. In calling for some version of the Dream Act, that would amnesty illegals who came here as teens or children, it says: "One of the great founding principles of our country was that children would not be punished for the mistakes of their parents." (This is lifted almost verbatim from Cantor's comments at the American Enterprise Institute last year.)

Besides the silliness of the claim (the Constitution does indeed ban bills of attainder, but is that clause really one of our "founding principles," equivalent to "All men are created equal"?) and its error (children suffer for their parents' mistakes all the time), the clear implication is that America can't be fully American unless it amnesties all illegal aliens who come here as minors. That's a statement of moral principle that's fundamentally different from other conservative rationales for a modified DREAM Act (including my own), which are based on considerations of mercy or practicality. In other words, Cantor, who has been drafting his own version of the DREAM Act, tentatively named the KIDS Act, is not saying that amnesty for kids who've spent nearly their entire lives here would be sound policy under certain conditions; he's saying amnesty for them is a moral necessity, implying that resistance is immoral. I'd expect that from, say, Luis Gutierrez, but not a member of the Republican leadership.

Speaking of Gutierrez, he visited Cantor's Richmond, Va., district this week. The ostensible purpose was to take Cantor to task for not allowing the Senate amnesty bill, or one of its proxies, to come up for a vote on the House floor. Despite the anti-Cantor rationale for the trip, experienced politicians like Gutierrez and Cantor know perfectly well that it was objectively pro-Cantor, feeding Cantor's own false narrative that he's responsible for blocking the passage of amnesty in the House — as Mickey Kaus put it, "setting him up as an anti-amnesty giant." The two didn't have to coordinate for Gutierrez to understand that a strong showing by Dave Brat in the primary would doom any prospect of amnesty.

Whether or not Cantor and Gutierrez coordinated this week's kabuki performance, they've worked together on immigration before. Notes the Washington Post:

That strong message was a changed tone for Cantor, who has repeatedly voiced support for giving citizenship to certain immigrants brought illegally to the country as children. Last year Cantor joined Gutierrez and other lawmakers on a three-day tour of immigration-related sites in New York aimed at increasing awareness of the issue.

During one of the stops on that tour he offered this shoutout to his friend:

Luis, the leadership you're providing through thick and thin right now as we try and navigate these very tough political times in choppy waters. My hat is off to you. I'm very grateful.

Doesn't sound to me like they're on opposite sides of the immigration issue.