How Upcoming Legislative Priorities Can Strengthen, or Sink, the 'Hire American' Agenda 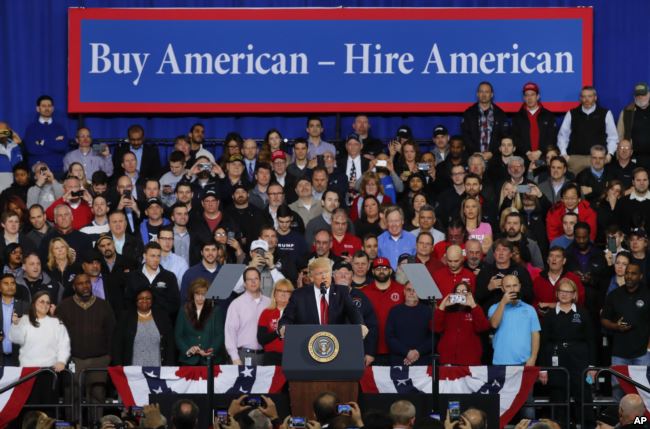 2018 is upon us , and with it come several urgent legislative priorities that superficially stand alone yet in fact are deeply connected.

First and foremost is the need for Congress to pass a budget for federal fiscal year (FY) 2018, which actually began on October 1, 2017. The federal government has been kept afloat through a series of short-term, kick-the-can-down-the road "continuing resolutions" because the political parties cannot seem to agree on the content and outlines of a budget, and also because it is being used as political leverage to achieve other goals that aren't directly related to this year's budget.

One of the other legislative priorities is a massive infrastructure improvement bill that could potentially pour at least a trillion dollars into projects to shore up our crumbling roads, bridges, dams, railways, and ports. This is important because all across America they have reached and exceeded their obsolescence dates and are literally falling apart, a la the Oroville, Calif., dam spillway leaks earlier this year that led to the evacuation of nearly 200,000 residents, or the 2015 Interstate 10 closure (also in California) when the Tex Wash bridge failed and collapsed. The problem is so acute that in its 2017 report, the American Society of Civil Engineers gave the nation's infrastructure a grade of D+.

Neither party appears to oppose the infrastructure bill, but there are sharp disagreements over the type and place of projects, as well as funding mechanisms: Democrats tend to favor direct spending and Republicans favor various public-private partnerships, for instance toll roads. In the end, one surmises that the bill will provide for both, not to mention a healthy infusion of monies given over as grants to state and local governments for approved projects.

There is also, of course, the looming question of whether, and how much such a bill would increase the already astronomical federal deficit, which will require hard discussions about tradeoffs in the way of other federal program reductions vs. raising the allowable debt ceiling.

The Trump administration strongly advocates congressional passage of an infrastructure bill that the president can sign into law, not just because the nation's backbone is in need of surgery and repair, but also because "shovel-ready" jobs of the sort that infrastructure normally entails are a prime source of jobs for those who work with their hands — not to mention additional jobs for the tens of thousands of engineering and technical specialists who are needed to plan, design, and oversee massive reconstruction and improvement projects. Such a bill is entirely in line with the president's "Buy American – Hire American" agenda, which was embedded in one of his first executive orders.

But the questions that loom large are these: How many of those skilled or unskilled labor jobs will actually go to Americans, and how many will end up going to aliens working illegally, often with the use of phony documents? How many of the engineering or technical jobs will end up being filled by outsourced H-1Bs hired by contractors and subcontractors looking to their bottom lines instead of gainful employment for Americans and lawful resident aliens? One of the many failings of the American Recovery and Reinvestment Act of 2009 that was enacted to combat the nation's housing collapse and long-term recession was that it provided almost nothing in the way of assurance that the jobs it was designed to spur would be steered toward citizen and lawful resident workers (see here and here), despite the fact that many of the kinds of occupations that call for "shovel-ready" jobs are encumbered, at excellent hourly wages, by unlawful workers.

That leads us to the third and last legislative priority I want to discuss: an immigration bill. There is tremendous pressure on legislators, in no small measure having been applied by the president himself, to do something about the "Dreamers" who will lose the "lawfully present" status accorded to them under Trump's predecessor, courtesy of an extra-statutory deferred action program that abused the concept of "prosecutorial discretion" out of all reason.

Democrats hope to see a so-called "clean" amnesty bill devoid of any immigration enforcement tools; stripped of funding for the president's "big, beautiful wall"; and without being obliged to address the thorny questions of amending the huge problems associated with visa lottery and chain migration. So far, the president has held firm that these must be a part of any negotiated bargain:

The Democrats have been told, and fully understand, that there can be no DACA without the desperately needed WALL at the Southern Border and an END to the horrible Chain Migration & ridiculous Lottery System of Immigration etc. We must protect our Country at all cost!

Excellent, but still not enough. Any negotiated deal to provide amnesty to Dreamers should include a nationwide mandated E-Verify program. This will not end the employment of illegal aliens, but it takes a gigantic step in the right direction by aiding employers in weeding out applicants/workers who present bogus or altered documents to obtain employment.

One would think that E-Verify is something employer organizations would be shouting for, insofar as it takes the burden off the backs of employers to make hard decisions about the legitimacy of the documents they're being shown to prove identity and the right to work. But, in general, they aren't (though the U.S. Chamber of Commerce supports an E-Verify mandate under certain specific conditions). One reason is that employers have little to fear in the way of government audits or worksite enforcement actions. That needs to change, and it doesn't require legislation to jumpstart. It only requires the federal immigration enforcement bureaucracy to make worksite compliance a part of its operational priorities.

To go back for a moment to the infrastructure bill:

These are just a few ideas; undoubtedly sharper minds than mine can think of many more, should they be attuned to it.

Policy wonks, from the White House level on down, ought to be strategizing right now on the ways in which the infrastructure and immigration bills can — and should — complement one another, rather than being in conflict with one another. But are they?

Failure to do so means that the jobs won't go to the people they should, and a grand opportunity to put the president's Hire American agenda into practice will be lost.