Mexican State of Nuevo Leon will ‘prevent illegal immigration’ on its side of the border, but details are scant

AUSTIN, Texas – Gov. Greg Abbott’s week-old “enhanced safety inspections” operation at border bridges, which significantly impeded international trade from Mexico, has yielded its first fruit: a Mexican border-state governor came to the negotiating table and cut a deal with Abbott to reduce illegal immigration on his side. 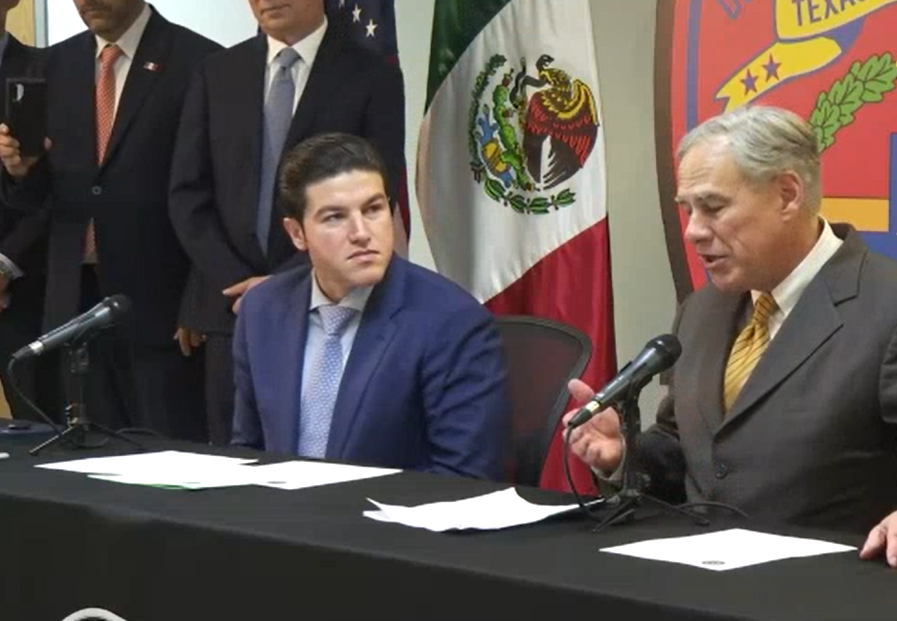 The governor of Nuevo Leon, Samuel Alejandro Garcia Sepulveda, has “begun and will continue border security enhancement measures” at ports of entry and along the Rio Grande river “to prevent illegal immigration from Nuevo Leon into Texas,” Abbott announced at a press conference in Laredo.

In return for Nuevo Leon’s security measures against illegal immigration, Abbott said he immediately ordered a cessation of the truck safety inspections that had all but shut down the Colombia-Solidarity International Bridge near Laredo, the nation’s busiest for commercial vehicles. Mexican business interests had pleaded with the Mexican governor to strike a deal with Abbott, Mexican media reported.

Wednesday’s announcement is notable in several ways. For one, an American state has, apparently for the first time, successfully usurped federal responsibility for national diplomacy by enacting its own punitive measures that forced a sovereign country – in this case, Mexico – to comply with its wishes on a national issue like cross-border immigration. Secondly, at his press conference, Gov. Abbott discarded any pretense that his bridge-blocking initiative was ever about anything other than forcing Mexico to slow migrant flows into Texas. And third, contrary to media reports that Abbott “walked back” his bridge strategy amid heavy criticism from the White House and business community, Abbott has in reality doubled down. Media outlets quoted few of his comments.

Doubling Down on the Texas Hold-Em Bridge Strategy

Clearly emboldened by this first fruit of his politically risky bridges campaign, Abbott showed that he will go on inflicting economic pain on all the other Texas-Mexico border states going forward, pointedly “except Nuevo Leon,” but warning that Nuevo Leon is still not safe from him.

The Texas DPS safety inspections at the Colombia-Solidarity bridge go away, Abbott warned, “as long as Nuevo Leon executes this historic agreement,” meaning, the Texas governor is willing to push the economic pain button if he is unsatisfied with Gov. Garcia Sepulveda’s strategy.

Gov. Abbott pointedly noted that he will leave in place all the other truck inspections impacting Mexican states “connected to Texas by bridge” until they too come to the negotiating table with a plan to shut down illegal immigration on their side.

He noted that the governors of those three other Mexican states – Tamaulipas, Coahuila, and Chihuahua – already have reached out to his office, suggesting other agreements may be forthcoming.

“I look forward to working with all of them toward achieving results similar to what we are achieving today with Governor Garcia,” Abbott said at the press conference. “Until, however, those agreements are reached with those states, the Texas Department of Public Safety will continue to thoroughly inspect vehicles entering the United States, except Nuevo Leon.”

Abbott announced his internationally and nationally consequential bridge-slowdown strategy at an April 6 conference, where he took pains to avoid suggesting that it was designed to force Mexico to slow or stop an expected mass migration event after the Biden administration ends the Title 42 instant-expulsion policy, which enables the Border Patrol to return most illegal border crossers back to Mexico and deny them a chance to fraudulently claim asylum. The Biden administration expects anywhere from 12,000 to 18,000 migrants a day after Title 42 is ended as planned May 23.

But at this week’s press conference, Abbott dropped any pretense that this was about anything other than “clogged bridges” forcing diplomacy between the United States and Mexico to stop illegal immigration after Title 42 ends.

“Clogged bridges can end only through the collaboration that we are demonstrating today between Texas and Nuevo Leon,” Abbott acknowledged. “If you want relief from the clogged border, you need to contact President Biden and tell him to maintain the Title 42 expulsion policy that has been in place for years. You need to tell President Biden to aggressively enforce the Remain in Mexico policy. You also need to contact Preside Lopez Obrador and urge him to collaborate with Texas to end the influx of cartel activity from Mexico into Texas.”

Some Mexican states look a little like gerrymandered U.S. congressional districts. Only nine miles of Nuevo Leon actually adjoin Texas, a parcel so tiny that completely saturating its nine miles with arm-in-arm state security officers would do little to stop illegal border crossings into Texas. By contrast, a long narrow finger of the neighboring Mexican state of Tamaulipas covers most of the Mexican side of the Rio Grande across from the Border Patrol’s Laredo Sector and also the busiest epicenter of the border crisis in the Rio Grande Valley.

But to get anywhere near Tamaulipas's highly trammeled border crossings along the Rio Grande, the migrants must first pass through the Nuevo Leon road system, especially along Mexican highways 85 and 40. Details about Nuevo Leon’s “border security enhancement measures” at the land port and on the river were scant. Mexican media this week did announce that Gov. Garcia Sepulveda would establish a major new checkpoint near the Colombia Bridge staffed by Mexican immigration officers, National Guard, and drug canines.

But for any counter-migration measures to be felt in South Texas, Nuevo Leon probably would need mobile road blocks on highways 85 and 40 where border-bound migrants would be rousted from vehicles and bused or flown to southern Mexican cities.

Operations like this are not uncommon when Mexico is made to care, as Donald Trump did when he threatened massive trade tariffs in 2019. Usually the Mexican federal government, not state governments, shoulders the cost of round-ups using national guard soldiers and also pays for the flights from border cities like Acuna, across from Del Rio, Texas. In recent weeks, for instance, Mexico was rousting migrants from Piedras Negras opposite Eagle Pass, Texas, and flying them to Tapachula in Mexico’s far south, probably at the secret behest of a Biden administration increasingly worried about the optics of these staging areas crowded with migrants.

Short of the roadblocks throughout Nuevo Leon, real participation from the Tamaulipas state government, and ultimately from the Mexican federal government, real reductions may not be felt in Texas.

By now, it seems clear that Abbott’s stick is real. He is going to use it. He doesn’t seem terribly distraught over criticism from Texas business interests.

The Nuevo Leon deal and calls from the other Mexican border-state governors tell Abbott that he is on the right track, at least for now. I predicted that the Biden White House and Mexican president Lopez Obrador would eventually have to pay heed, given the national significance of the trade route across the Rio Grande. Abbott's inspections regimen finally did get the White House's attention, as seen by a public statement from Jen Psaki that, probably unintentionally, offered reinforcing support for what Abbott is doing.

“Governor Abbott’s unnecessary and redundant inspections of trucks transiting ports of entry between Texas and Mexico are causing significant disruptions” to everything from food and automobile supply chains and manufacturing.

Disruptions, or “clogging” as Abbott would put it, was clearly the intent when Abbott launched this effort. Because of this strategy, Texas and its concerns won’t be ignored.

It’s also safe to reason that if the Mexican governors who do cut deals with Abbott think he’ll go away if they don’t follow through, they’re going to be as wrong as the reporters that wrote Abbott had caved in on his plan, cut and run, as they say in Texas.

And if Biden and Lopez Obrador believe they have no more work to do on this little Abbott problem, they seem to be wrong too.

“The ultimate way to end the clogged border,” Abbott said, “is for President Biden to do his job to secure the border.”