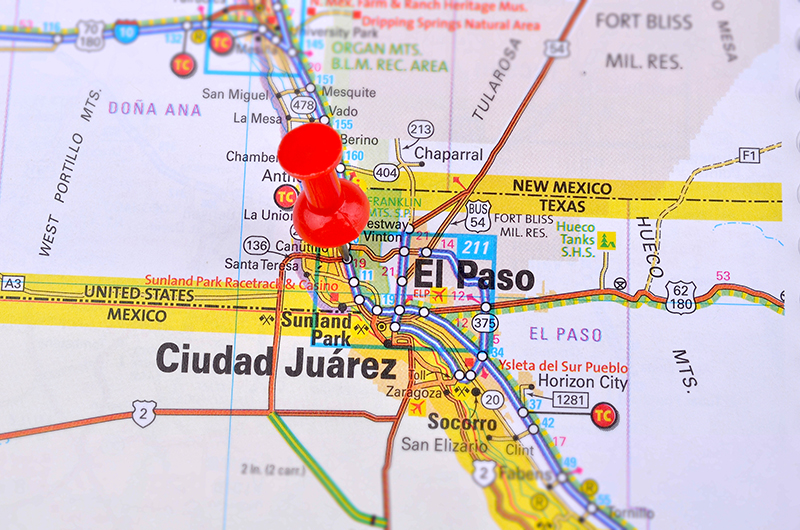 In El Paso County across from Juarez, Mexico, hospitals once again are buckling under the weight of a new Covid-19 case influx of 300 percent in just the past three weeks, drawing intense media coverage in recent days. Hospitals in California's border-hugging Imperial Valley are jammed with patients, too, transporting "hundreds" of them to interior hospitals to keep their beds clear for more. And in the Arizona-Mexico border counties of Yuma and Santa Cruz, hospitals also are suffering Covid-19 case surges.

Unfortunately or fortunately, this all looks like a re-run of what happened this past spring and summer, not only in El Paso, where the crisis is national news, but also in Arizona and California.

But no caring American citizen or policy-maker is served by again dismissing the fact that should have triggered targeted, data-based measures the first time around beyond local bar and restaurant closures: Untold thousands of Mexican Covid-19 patients overran their own hospitals to the point of collapse, then figured out ways to get themselves over the border and into California, Arizona, and Texas hospitals, as the Center for Immigration Studies extensively (and to this day, exclusively) reported throughout that summer. Among them were plenty of illegal border-jumpers ferried to U.S. hospitals by Border Patrol agents who, as I reported, contracted the disease and in some cases died in the line of duty.

Perhaps it is all a coincidence that Mexican hospitals across the line collapse just before Mexican Covid-19 patients make a run for U.S. border hospitals. But what happened just months ago sure looks to be the culprit again, and if so, should inform any response to what's happening in El Paso, as was described last summer by Dr. Ivonne Lopez, medical director of the McAllen Hospital Group at McAllen Medical Center in South Texas. Dr. Lopez said "many" patients that were overwhelming Texas hospitals had come in from Mexico.

Recent history and the way things look in Mexico's hospital system argue again for policy-makers to take a hard look at whether El Paso's current pain is flowing once again from the deeply troubled hospitals of Juarez — and refrain from untailored responses to it, like closing American-side bars. Here's a snapshot of what's happening in northern Mexico on the Covid-19 front.

Untended bodies on stretchers in hospital hallways, patients dying while waiting for care in parking lot vehicles, funeral and burial backlogs, long lines to buy oxygen, and a return to "Code Red" restrictions once again afflict the sprawling metropolis of Juarez just over multiple international bridges from coincidentally suffering El Paso, according to Mexican television and newspaper accounts. This is the second go-round for Juarez, where the collapse of hospitals in May and June coincidentally led afterward to pain for El Paso's system.

The situation has become so dire in recent weeks that Juarez's mayor, who himself has fallen ill with the virus for the second time, has ordered a 15-day shutdown of the city following a mandate from Chihuahua Governor Javier Corral, with 10 p.m. to 6 a.m. curfews in effect. The reason? Four Juarez hospitals are 100-percent filled to capacity with a terrible new coronavirus wave in Mexico. Chihuahua's other 23 hospitals the week of October 22 were struggling with a record 677 patients, including 151 who are intubated this week.

Online internet searching easily turns up stories that the governor is rushing hospital beds, ventilators, and staff to Juarez as 28 deaths just on Sunday (October 25) helped escalate the city's total to 1,110 of the state's 1,776 deaths since the pandemic started.

Covid-19 patients in Juarez are so numerous now that city hospitals are unable to care for other sick people. Arturo Valenzuela Zorrilla, medical director of the Northern Zone told local media hospitals are in such dire straits that "the health sector is looking for resources anywhere to provide care because we are being overtaken by this wave of infections that we are facing."

Is it any wonder that any Mexican citizen sick with Covid-19 or perhaps other health issues, if they possibly could, would cross the border for U.S. care?

A morning's drive south of Tucson, Ariz., Nogales Mayor Margarita Osorio recently went on television to beg Mexico City for supplies and beds to treat a massive influx of Covid-19 patients who she said "are dying in hospitals" as a result of Covid-19 spikes and lack of supplies to treat it.

"Please, Mr. Minister of Health," the mayor pleaded, standing outside one of the beleaguered hospitals. "I need you to come and see the Mario Sanchez de La Calera Hospital, help the people who are in the beds, with all their hearts ... there are people who are dying because they do not have the basic supplies."

The mayor's plea could not be construed as baseless hysteria. She and the people of the State of Sonora have been through this hell already just a few months ago with a crisis that coincided with a massive influx of sick Mexicans into Santa Cruz County, Ariz., hospitals, from which thousands were shipped to bigger Phoenix and Tucson facilities to relieve bed space for ever more.

The latest corona surge in Nogales and the state of Sonora seems to have begun in early- to mid-October, reaching 35,000 patients and starting to fill hospitals. In late September, a top health official warned that hospital supplies were running out, sending "a parade of patients" shopping for hospitals to treat them. Two weeks ago, hospitals had reached 25 percent capacity. The state has now raised the state's risk level from the medium of yellow up to orange.

By October 25, the state had suffered 3,097 deaths from 36,823 infections. Seeing the tide rising, Hermosillo hospital put non-urgent surgeries on hold. Mexico seems to be preparing for more in Sonora. The Mexican Institute of Social Security in Sonora has begun converting hospital space to Covid-19 use in expectation for the resurgence to worsen.

Just south of the California border, Mexican health officials are converting hospitals for Covid-19 patients as fast as possible with the onset of what is being described as an emerging crisis. In the spring, Tijuana hospitals were described as a "war zone" of staff and ventilator shortages that saw patients dying and being treated, if at all, in lobby areas. With no process to dispose of bodies, they stacked up on gurneys for mass burials on public land. The death rate in Tijuana hospitals was 50 percent.

For weeks, hospitals in California filled with sick patients naturally fleeing those circumstances.

Now, Baja deaths and patients in need of intubation are increasing again day by day, to include 239 deaths from September 24 through October 24. While hospital capacity in the state remains under 40 percent this week, some 40 percent of the Covid-19 patients are showing up in Tijuana hospitals so ill they need to be intubated immediately, an indication of potential waves to come.

As the news outlet ZetaTijuana reported, "The curve in hospital occupancy is also upward, from 23 percent last month; it is now 27 percent, and hospitalizations continue to increase."

The newspaper quoted Alonso Pérez Rico, head of the State Secretariat of Health, saying: "If we continue these trends of increasing hospitalizations, increasing intubated patients, increasing our fever clinics and our positivity rates, we are going to go red, just like Chihuahua."

The Definition of Insanity

The old saw has it that doing the same thing over and over despite failure is the definition of insanity. Yet border state governors are responding yet again with policies that assume the Covid-19 spread is strictly the in-country fault of Americans engaging in irresponsible behavior. For instance, California Gov. Gavin Newsom is reversing course on reopening his state's economy. Texas Gov. Greg Abbot also is limiting blame to reopened bars, restaurants, and water parks, which he wants to restrict again. Arizona Gov. Doug Ducey has ordered gyms, bars, and Salt River inner-tubing businesses to re-close.

None of these responses takes into account a likely very significant source of Covid-19 well outside their reach, because what's happening is happening in another country. That requires its own, probably federal, response, which may have to wait until long after an election, by which time it may be too late.