How to Stop the Entire World from Marching Across the U.S. Border

With friends like Colombia, Panama, and Costa Rica moving oceans of global migrants to the southern border, who needs enemies? 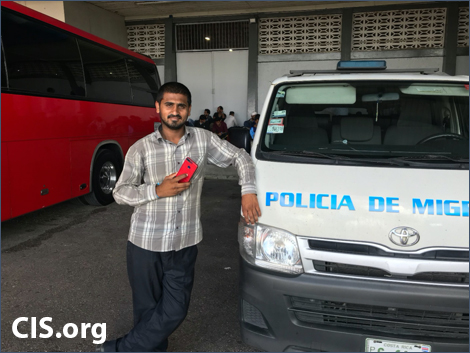 A human migration tsunami of historic proportions — anywhere from 70,000 to 85,000 strong — is on its way from throughout the globe to the U.S. southern border, funneling through the notorious so-called “Darien Gap” jungle route that runs out of South America into Panama and then on northward to the U.S. border.

More international migrants are crossing through the gap than in anyone’s recorded memory, all heading to the U.S. southern border. The Associated Press said so. Axios said so. And now, of late, on the front page of its Sunday print edition, the New York Times has said so.

But nowhere in any of this profoundly belated coverage of U.S.-bound international migratory travel through the Darien was it mentioned that Panama on the other end of it — meaning, the actual U.S.-allied government of Panama — is itself the primary official smuggler. Nor was it ever mentioned that the U.S.-allied countries of Colombia and Costa Rica are just as complicit in materially facilitating the movement of migrants, as a matter of government policy, ever onward out of their territories toward the American border. Both Colombia and Costa Rica allow criminal smuggling organizations to operate mostly unfettered to achieve the national objective of clearing their own countries of a potentially expensive problem.

But with friends like these pushing 70,000-plus immigrants to cause chaos and crisis on the U.S. southern border, as happened recently in Del Rio, Texas, and now is happening in Yuma, Ariz., who needs enemies?

And yet, even at a time of epic numbers like these, the United States has never seen fit to publicly acknowledge that Colombia, Panama, and Costa Rica are doing this to the American people. The American public hardly knows of it. Nor has the United States sought to diplomatically leverage any of the governments to instead disrupt, slow, or outright halt the flows of people long before they reach Mexico. This strange state of tolerance and American public ignorance, even during the Trump administration, endures despite the fact that all three of these nations are ideally positioned as trail-route bottlenecks where new U.S. strategies can significantly attenuate the problem if all involved simply acknowledge that it is happening and there is a political will to press for a solution.

In December 2018 and again in June 2021, the Center for Immigration Studies sent me to Panama and Costa Rica, where I traveled widely documenting the international migrant traffic routes leading out of the Darien Gap as an American national security issue; at least several thousand migrants a year, after all, hailed from Islamic nations where terrorist groups operate.

On that first late 2018 trip, I was surprised to learn that both Panama and Costa Rica had for several years quietly coordinated a bi-national practice they called “controlled flow”, which I have dubbed “catch, rest, and release”.

The policy was predicated on the quite understandable idea that none of these countries wanted to bear the considerable costs or social burdens of stopping migrants already heading for the exits, blocking them or turning them back. Colombia, Panama and Costa Rica didn’t need to, either, since most of the migrants were voluntarily leaving.

[Read the rest in The Federalist.]