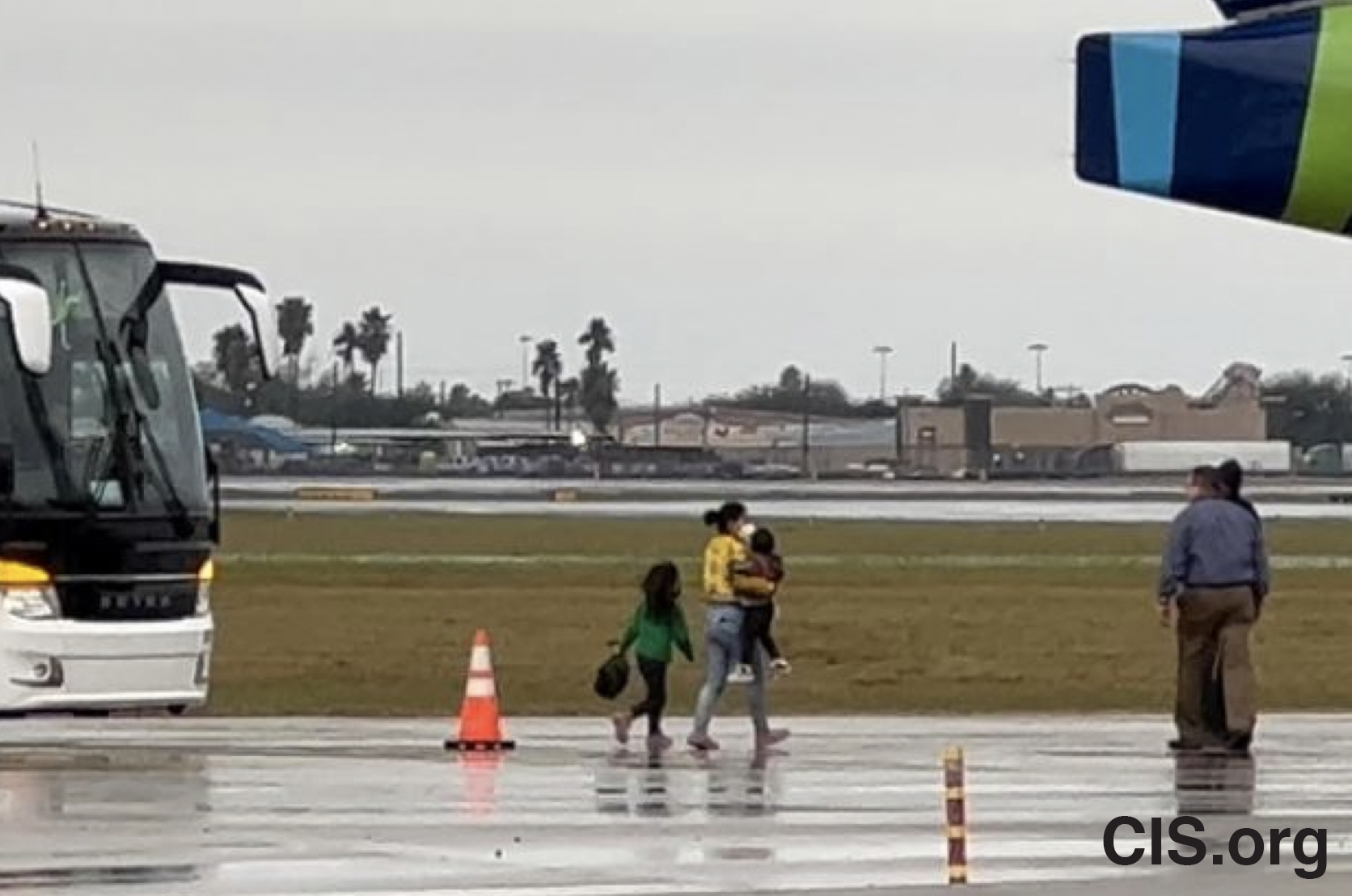 A migrant and two children disembark an ICE bus at the McAllen, Texas, airport to board a deportation flight to Guatemala City, November 2021. Photo by Todd Bensman.

AUSTIN, Texas — In the first month of 2022, U.S. Border Patrol agents laid hands on more than two full Super Bowl stadiums worth of foreign nationals who crossed the southern border illegally, according to U.S. Border Patrol apprehensions statistics just released reflecting what happened down there in January.

Border Patrol caught 146,942 aliens crossing through the brush between official ports of entry (and another 6,999 on the international bridges, for a total of 153,941). Like the Yertle the Turtle story of Dr. Seuss fame, the January number adds its considerable weight to a stack of a dozen crushing months that amount to the biggest illegal mass migration border emergency in American history.

But the latest numbers also suggest that something new and different is afoot with the crisis. January’s crazy number is still down about 14 percent from December’s 179,219, and down 59,652 from July’s crisis peak of 213,593. In fact, the January numbers are actually the lowest since Border Patrol apprehensions first crossed the 100,000 Rubicon in February 2021 and never looked back.

The crisis has not had a 200,000-plus month since August. Which brings us to the one Biden policy that sharply departs from the administration’s open-borders norm: a massive and expanding Trump-style repatriation airlift operation that President Biden’s administration quietly ordered that very month. The border-apprehensions balloon has slowly deflated ever since.

Arguably, no weapon in the immigration-deterrence arsenal is more effective than air deportations, because migrants who begged, borrowed, and hocked everything they owned to raise huge smuggling fees ended up broke and back at square one, text-messaging warnings to the whole home village not to try it right now. Air deportation is a tried-and-true solution to mass illegal immigration.

It doesn’t have to transport every migrant to instill its deterrence, just enough will do, as CIS reported it working during the Haitian migrant camp crisis in September 2021. Former President Barack Obama used the potent tool to still a 2014 crisis of unaccompanied minors by shipping some of them back to Central America in a handful of high profile, demonstrative deportation flights. Former President Donald Trump heavily used ICE Air to great effect, too, although to much more criticism and negative publicity.

As the Center for Immigration Studies first disclosed in December 2021, the Biden deportation airlift from South Texas airports has targeted nationalities crossing in the greatest numbers: Haiti and Central American families from Guatemala, Honduras, and El Salvador.

Now the administration has expanded its target list to increasing numbers of border-crossers from Venezuela, Brazil, and even Ecuador, whose citizens have been showing up a lot at the border lately.

My best estimate is that, since August, the Biden administration’s ICE Air has flown home many tens of thousands of Central Americans, mostly families with children, even while it weirdly flies others of the same nationalities into American cities in the dead of night. 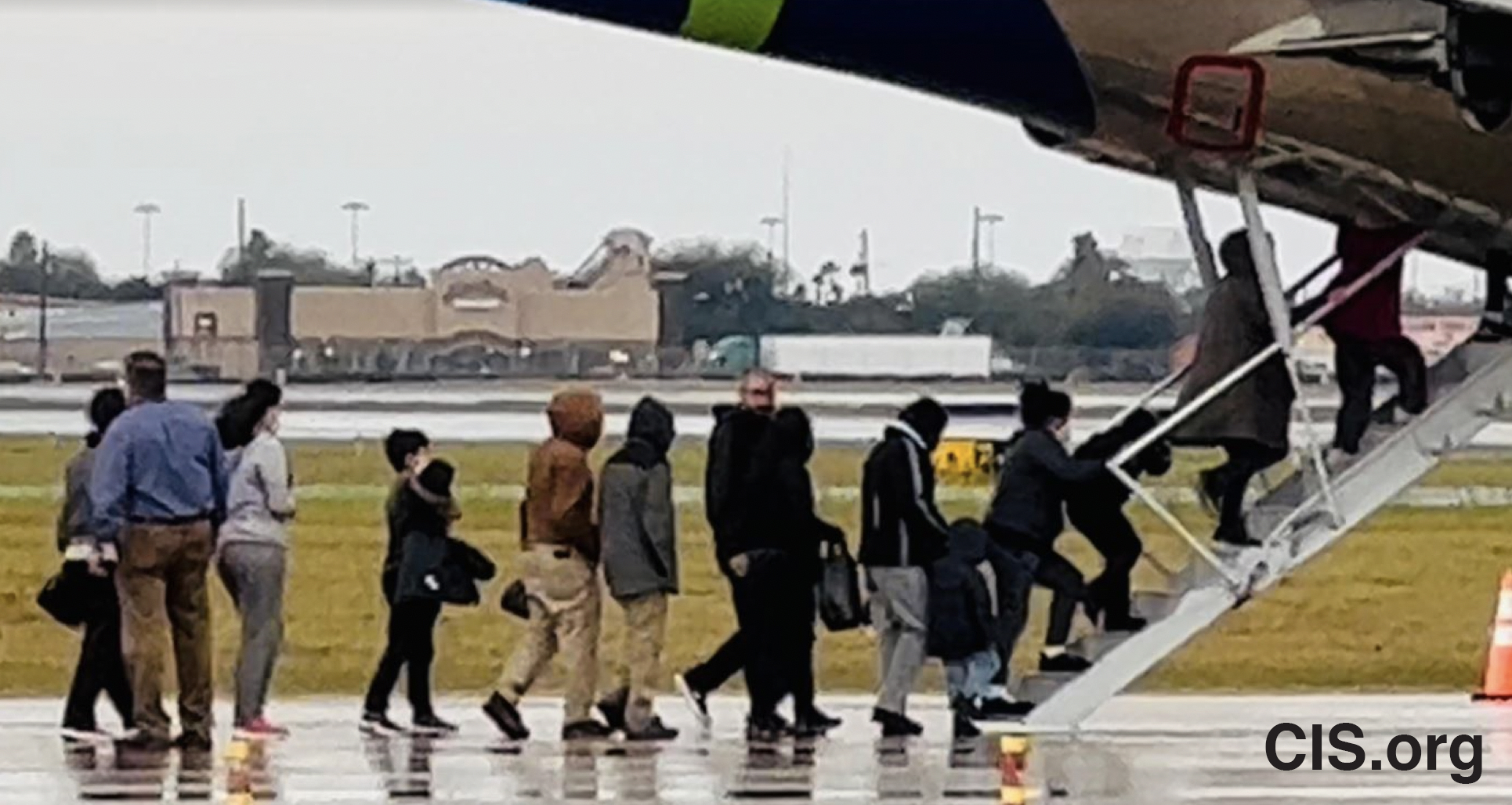 Central American women and children migrants in McAllen, Texas, board a deportation flight to Guatemala City. Photo by Todd Bensman.

Haitians Back to the Homeland

In September, Biden’s DHS used air deportations to quickly close a politically damaging migrant camp of 15,000 Haitians in Del Rio, Texas, ultimately shipping home about 8,500 Haitians before ending the flights amid criticism from pro-illegal immigration groups. Apprehensions of Haitians dropped 95 percent – because of the air deportation threat, in my opinion – and stayed down for a couple of months.

My January 27, 2022, Center for Immigration Studies report from Tapachula, Mexico is still the only one to disclose that the Biden administration in December reinstituted the dreaded air repatriation flights for Haitians amid a sharp December spike in their crossings, from 1,250 in November to 7,344 that month. In January, when ICE Air flew 36 flights to Haiti, many Haitians in Mexico were telling me they would avoid the American border at all costs until that radioactive threat faded away.

The anti-deportation group Witness at the Border, which tracks ICE Air deportation flights on its website, reported that DHS deported some 4,000 Haitians aboard 36 flights in January. And in January the border apprehensions of Haitians dropped by some 50 percent, to 3,800. I’m told that nary a Haitian can be spotted anywhere on the border this month.

It’s no wonder the Biden administration began its airlift operation targeting Guatemalans, Hondurans, and Salvadorans, a collective population that amounted to close to half of everyone crossing earlier in the Biden border crisis. At its 213,000 peak in July 2021, Central Americans accounted for 94,820 of them. Of the 209,000 in August, Central Americans accounted for 92,197.

That August was the month Biden’s administration, eyeing low polling numbers on immigration ahead of the 2022 midterm elections, must have figured it needed to do something different and launched deportation flights for some Central Americans.

Flight-tracking databases of some of the planes show the ICE-contracted planes taking off from McAllen, Harlingen, Laredo, and Brownsville, Texas, airports and landing at tarmacs in southern Mexico, Guatemala City, San Pedro de Sula in Honduras, and San Salvador. For January, Witness at the Border reported 23 expulsion flights to Guatemala, 27 to Honduras, and 12 to El Salvador.

And guess what? Their apprehension numbers have fallen precipitously every month since the airplanes started flying there. From the 90,000-per-month range of last summer, the combined number of Guatemalans, Hondurans, and El Salvadorans had fallen to 31,752 in January, CBP data shows.

That is firmly in pre-crisis range.

The Biden administration won’t say a public word about any of this, but it clearly likes the results of its estimated 1,095 air deportation flights so far because it is now targeting Venezuelans, a bit of a latecomer among spiking nationalities but in full bloom recently. In August, the number of Venezuelan apprehensions was 6,436. By December, that number had quadrupled to 24,953.

In this case, no one can argue anything but a cause and effect because CNN and then the Washington Post reported in a January 31 story that Biden’s DHS had just begun flying Venezuelan border-crossers to Colombia under a new agreement it very quietly hammered out with the South American country. Millions of the Venezuelans had resettled in Colombia and neighboring countries after fleeing a collapsed economy, but then saw that Biden had opened the U.S. border to hundreds of thousands of "asylum seekers" and found that they could fly into Mexico without visas, so …

But the Biden deportation flights apparently are now part of a broader American dissuasion campaign targeting the ability of Venezuelans to fly visa-free to within easy striking distance of the American border. Visa-waiver agreements enabled many Venezuelan border-crossers to fly from Colombia to Belize City, Guatemala City, Mexico City, or Monterrey, enabling them to avoid the terrible Darien Gap journey from Colombia to Panama. Once in Belize or Mexico, Venezuelans could arrange relatively quick journeys to the U.S. border, where they are seen almost comically dragging rolling luggage up riverbanks or through fields. But in recent months, Guatemala, Mexico, and Belize suddenly announced plans to require visas for Venezuelans.

It’ll take a while longer for all of that visa and American deportation flights radioactivity to spread among intending Venezuelan border-crossers and influence their decisions to stay wherever they are; Border Patrol still caught more than 22,000 of them in January. But look for a steep decline in their numbers this month and next.

Witness at the Border is reporting that DHS also very recently started flying home citizens of Brazil out of Yuma, Ariz., including 90 minors among 211 migrants in January as part of a new agreement with Brazil. It flew five times to Ecuador, and a surprising two to Nicaragua. Increasing numbers of Nicaraguans are illegally crossing the border these days but diplomatic relations between the U.S. and the openly hostile leftist Sandinista dictatorship that controls Nicaragua and ruined its economy are sparse.

Signs of Change in the Biden Administration May Not Be Enough

In Tapachula in January, I met a great many Central Americans who were aware of the deportation flights but were not dissuaded from crossing because, as several of them told me, the Biden administration also was escorting many other Central American border-crossers into the country with legal authorizations.

The fact that this is still happening reflects a residual, if declining, influence of progressive liberals in the White House who seized control of immigration policy early on in the Biden term and immediately triggered the mass migration emergency. Amid airlifts that are anathema to them, at least three of those progressive policy advisors have resigned in recent months.

But as long as the administration allows any part of their policy ideas to linger, such as rewarding a great many illegal border-crossers with settlement inside the United States, too many others will continue to take the gamble that they won’t be among the unlucky ones to end up on the planes.